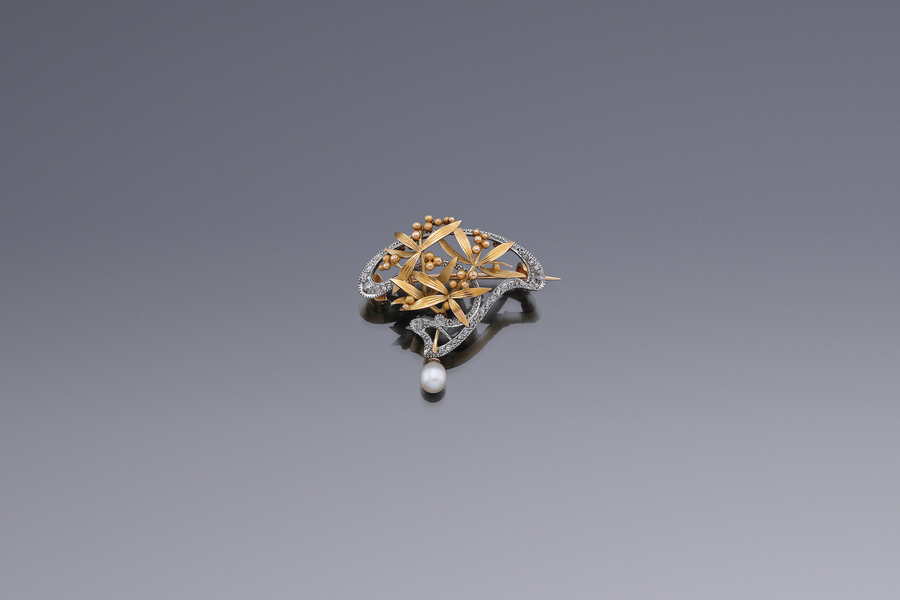 This small but boldly executed brooch is made of 18-carat gold and platinum. Its flowing lines are typical of the Art Nouveau period. The outer border is set with rose cut diamonds in platinum on gold. From there springs a sprig of mimosa (Acacia dealbata) in gold, with berries. A teardrop pearl hangs from the bottom of the brooch.
Mimosa, a member of the Acacia family, was originally brought to Europe from Australia by the explorer Captain Cook, eventually arriving on the French Riviera around 1850, when it had become fashionable for wealthy English people to spend their winters there. Queen Victoria was enchanted by the Riviera, visiting regularly in her later years and enjoying the local festivals. These expatriate part-time residents, some of them passionate gardeners, brought over several varieties of mimosa, doubtless from places like Kew where it had been cultivated, to adorn their gardens in the region's mild climate. Mimosa varieties acclimated perfectly in the region, which had a climate similar to that from which they had originally come. Magnificent gardens were created. Several of these survive to this day and are open to the public. Chief among them is the Serre de la Madonne garden, created by Lawrence Johnston, designer of Hidcote Manor Garden in the UK. There is even a Mimosa route that can be followed in the South of France.
In its symbolic meaning Mimosa stands for protection, love, prophetic dreams and purification.