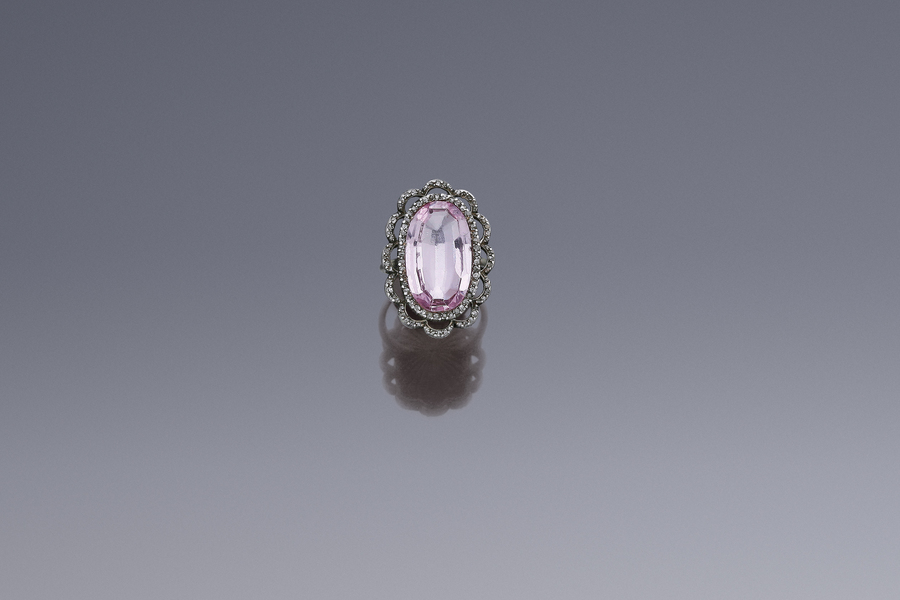 This important early nineteenth-century ring is made from pink topaz, diamonds, gold and silver. The large oval facetted pink topaz is set in a closed-back setting, circled by a border of rose cut diamonds, set in silver on gold. This is surrounded by an openwork scalloped edge, likewise set with rose cut diamonds.
Coloured stones were in fashion in the period when this ring was made. Complete parures were made using aquamarine, amethyst, chrysoberyl and topaz. Topaz became highly popular after the topaz discoveries in Brazil during the eighteenth century. In Europe there was a famous mine in Schneckenstein, in the Ore Mountains in the east of Germany, where topaz was found.
Nowadays the most important sources are in Brazil, Sri Lanka, Burma (Myanmar), Australia and Russia. Topaz occurs naturally in several quite pale colours, ranging from colourless, yellow, wine red, light blue, light green and pink. The colorless and pale stones are most abundant in nature, followed by yellow and brown stones, while the golden-orange, pinks and reds are most rare.