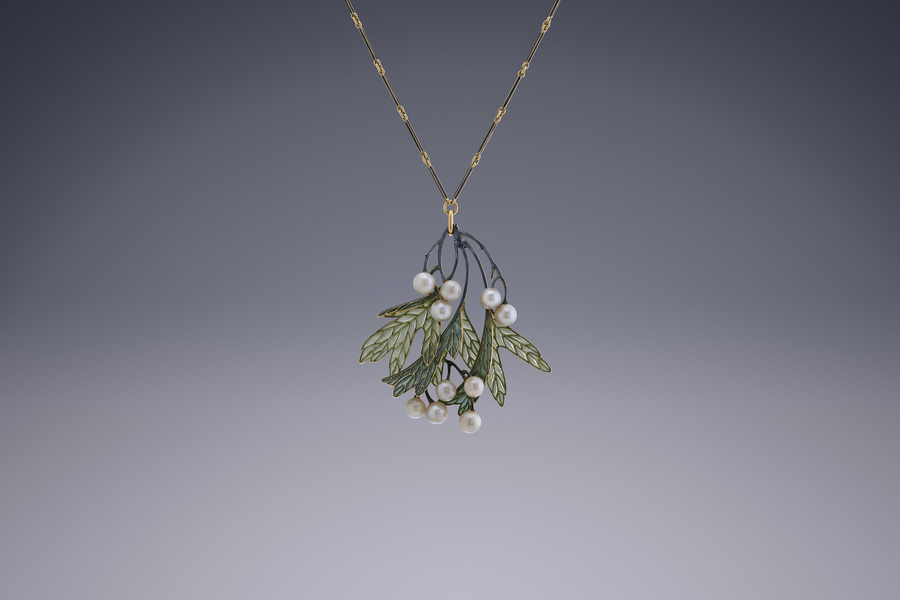 Plique-à-jour gold leaves, enamelled in two shades of green, curl around the pearl berries and mauve enamelled twigs of this ravishing pendant, which represents the Sorbus suecica or Swedish Whitebeam. The original gold chain also has dark mauve enamelled links. This elegant pendant was made by René Lalique, the leading innovator of French jewellery in the late nineteenth century.
This signed and dated pendant, for which the designs survive, is a refined example of his work.

At the age of sixteen, René Jules Lalique (Aÿ, 6 April 1860 — Paris, 1 May 1945) was apprenticed to the Parisian jeweller Louis Aucoc. Between 1878 and 1880 he studied at the Sydenham Art College in London. After returning to France he designed for Aucoc and, from 1882 onwards, also for other great jewellery houses including Vever, Cartier and Boucheron. These early works were designed in the conventional naturalistic style. Four years later, he started his own firm. In the meantime, he had been studying enamelling techniques and had developed a highly individual and original style inspired by nature and by Japanese art. Unlike his predecessors and contemporaries, Lalique subordinated the materials to the design, using elements that were then very unusual in haute joaillerie: glass, enamel, leather, horn and shells. Lalique selected particular stones for their colour, lucidity, shine and shape, and not necessarily for exclusiveness or intrinsic value.

By 1890, Lalique was one of the most important jewellery designers and among the driving forces behind the development of Art Nouveau in France. He made innovative designs for Samuel Bing’s shop in Paris, La Maison de l'Art Nouveau, that attest to his great artistry and craftsmanship. His designs were then executed by a team of chasers, enamellers and sculptors he recruited.
In 1895 he presented his jewellery collection at the exhibition of the Societé des artistes in Paris, causing a sensation with the soft, fluid lines of his female figures, insects and butterflies. He triumphed at the Exposition Universelle in Paris in 1900 and his Art Nouveau jewels were internationally sought-after and a source of inspiration for other jewellers. Many of the jewels he made were commissioned by the actress Sarah Bernhardt and his most important client, the Armenian oil magnate Calouste Gulbenkian.

In the period preceding Art Nouveau, there was a style vacuum in Europe and North America. For a century, jewellers had been harking back to historical styles, from Classical Antiquity to the design idiom of the Louis XIV, XV and XVI fashions: historicism. At the same time, there was a growing backlash against the efficient, cheap but soulless manufacturing techniques spawned by the Industrial Revolution. There was a tireless quest for a new contemporary style that would restore craftsmanship to its rightful place.
When Japan opened its borders to trade with other countries in 1854, the art that came to Europe was the major source of inspiration for Art Nouveau, which was adopted with particular fervour in France. The materials used in Japanese art and the decoration techniques that were completely new to Europe made a huge impression. Japanese art caused a break with the prevailing rules of academic painting in Europe – but it was precisely this that so appealed to the innovative generation of artists. The nineteenth-century Impressionists took the large planes of colour, the abrupt cropping and the elegant lines and used them in their own paintings, creating a fusion of Japanese and Western influences: Japonism. But it was to be another thirty years or so, before the style was reflected in jewellery designs. It was nature in Japanese art that was one of the greatest sources of inspiration for Art Nouveau, characterized by its flowing lines, sometimes called ‘whiplash’. The style was all the rage for a brief but intense period, reaching its peak at the 1900 Exposition Universelle in Paris, where René Lalique caused a sensation.
Signed 'Lalique' and stamped with maker’s mark
Dated 1901