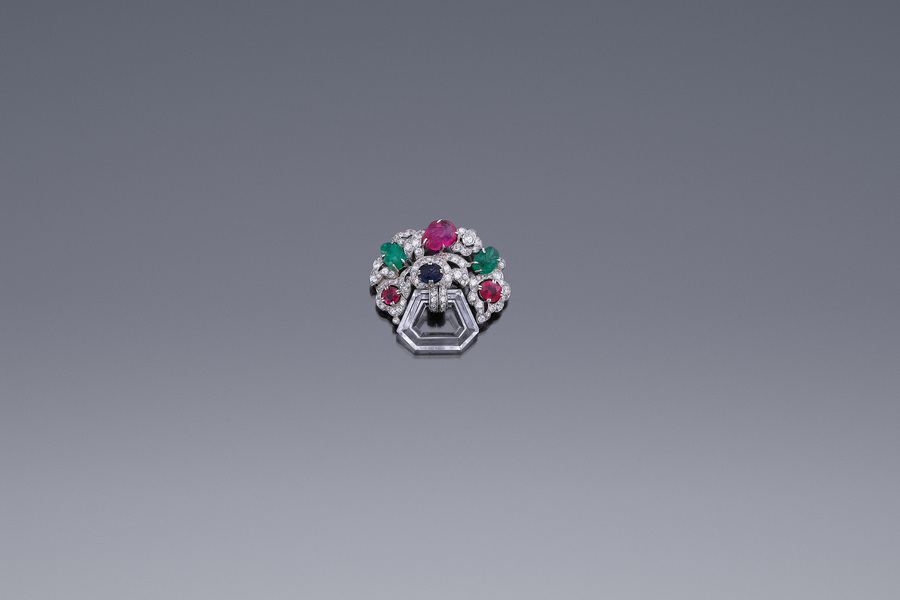 This sparkling platinum brooch was made in France around 1925. Rising from the openwork hexagonal rock crystal vase is a bouquet of flowers set with two engraved emeralds, one engraved ruby, an engraved sapphire and two faceted rubies surrounded by diamonds amounting to some 1.2 carats.
The first Tutti Frutti jewels were designed by Jacques Cartier. When he started traveling to India in 1911, meeting with the fabulously rich and bejewelled royals, he was enchanted by the readily available colourful carved gems he found. Cartier and his craftsmen turned these modest gemstones into art by setting them in exquisite openwork platinum frames, lighting up the gemstones with small brilliant cut diamonds. This look came to be known as ‘tutti frutti’, roughly translated as ‘fruit salad’. This term did not originate with the design and was considered rather vulgar at first. It is believed to have been coined in the 1940s to describe the wildly colourful fruit-basket headdresses worn by singer Carmen Miranda. The pieces were originally described as being set with ‘pierres de couleur’ or coloured stones.
Hallmarked with the French assay mark for platinum and an unidentified maker’s mark.