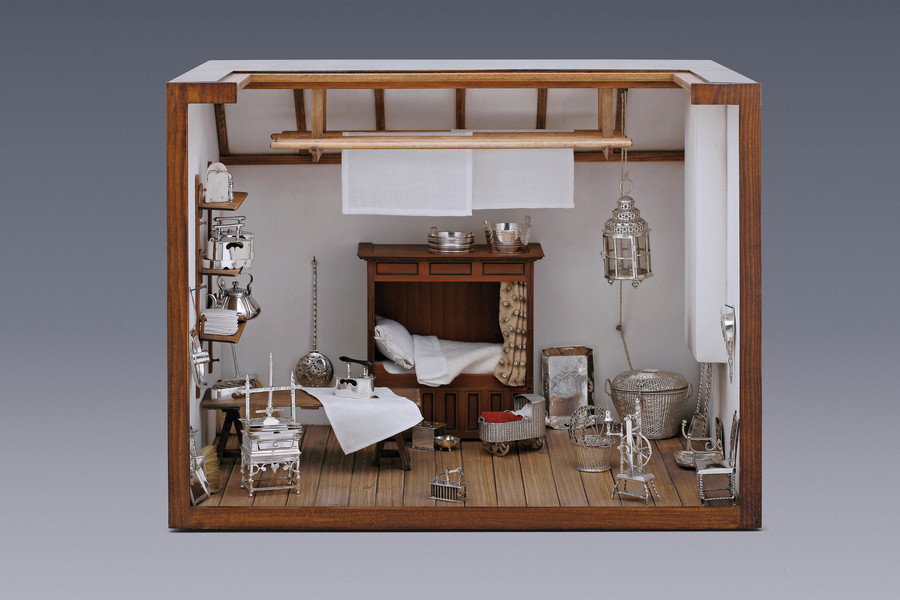 The attic floors of the seventeenth-century merchants’ houses along Amsterdam’s canals were working spaces where many of the jobs involved in running the house were done. There were linen rooms, larders and peat stores. This model linen room is furnished entirely with antique Dutch silver miniatures from the seventeenth and eighteenth centuries, which present a picture of the everyday housekeeping in that period. Linen had to be washed, bleached, dried, stretched, ironed, beaten and pressed. It was very labour-intensive work, and table and bed linens, in particular, were sent out to specialist laundries for washing and bleaching. These were usually outside the city, where there was plenty of running water and space for bleaching fields. Although items were not washed in the linen room, wet laundry was hung there to dry. Once it was returned to the house, the laundry was finished in this room and put away. Drying racks or airers, attached to the ceiling, were an indispensable feature of the linen room. Washing could be dried on them or damped for ironing. Damp or dry linen was pulled into shape then ironed on ironing boards -loose boards on trestles.
A variety of irons was available for pressing, including charcoal irons and flatirons. On the wall rack there are two on stands, one made by Arnoldus van Geffen in 1760 and the other one by Daniel van Strant in 1750. The flatiron was made by Wessel Jansen in about 1670.
The iron with the stand on the ironing board was made in 1744 by Maria Breda, one of the few female silversmiths.The room also contains a cradle by Arnoldus van Geffen, a rare seventeenth-century mousetrap by Hendrik van der Star, a large lantern and a spinning wheel by Arnoldus van Geffen. Except for the bedpan, all these miniatures were made in Amsterdam, some in the seventeenth but most of them in the eighteenth century.