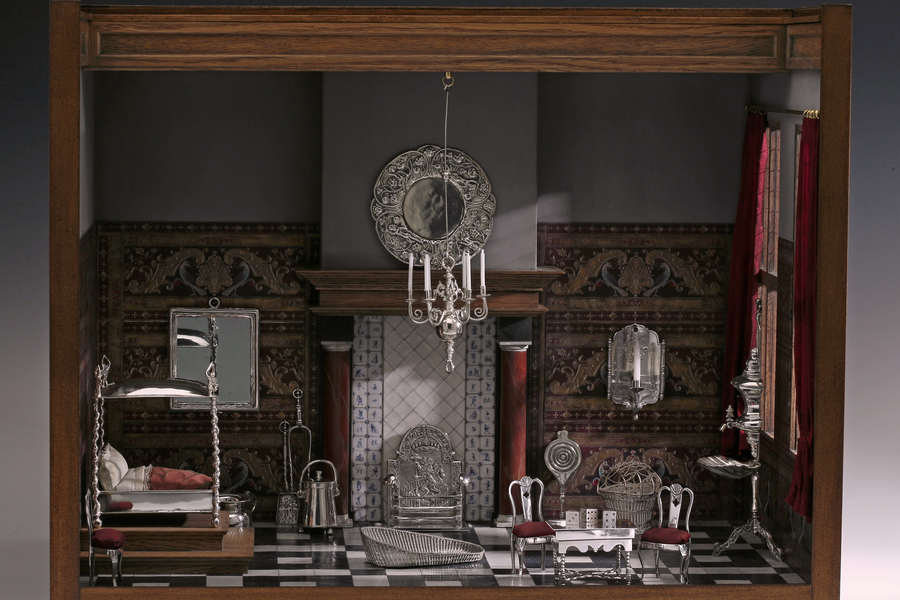 The design of this miniature bedroom is derived from the 17th century painting by Emanuel de Witte in the collection of Museum Boijmans van Beuningen in Rotterdam. It is furnished entirely with rare antique Dutch silver miniatures from the seventeenth and eighteenth centuries. The houses along the canals in Amsterdam were furnished and decorated in the latest fashion. Every canal-side mansion had one or more reception rooms, also known as the Best Room, State Room or Salon. Rooms like these were not used every day, but were kept for important receptions, as a lying-in room after a birth or as a room in which the body was laid out after a bereavement. The reception room was the most important and prestigious room in a canal-side house, and this was expressed in its grand, formal furnishings. Tapestries, wall hangings, silk fabrics and gold leather were all used in these rooms. The most expensive floors were made of stone imported from abroad. White marble from Italy was extremely popular, laid in geometrical patters with grey-blue or back stone from the Southern Netherlands. This combination is a common feature of paintings made in the second half of the seventeenth century. The room contains a miniature four-poster bed which is presently one of the rarest surviving miniatures. The superb example in this room has barley-twist posts and each post is crowned with a putto. The Amsterdam silversmith whose maker’s mark was a bust made it around 1730. There is also a rare gaming table with three chairs, a wall fountain, a bed warmer and a wall sconce. All these miniatures were made in Amsterdam in the eighteenth century to a seventeenth-century design.