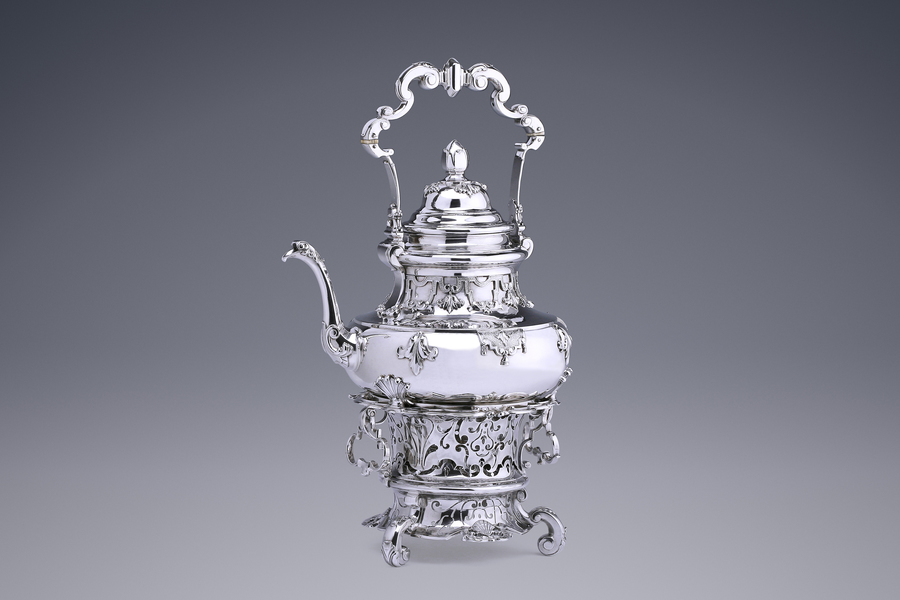 A Highly Important Kettle on Stand

This impressive kettle on stand is the most elaborately ornamented Dutch silver example known in Louis XIV style. It is wonderfully executed and a true masterpiece by the Amsterdam silversmith François Lambregts.
In general, eighteenth-century Dutch silver is known for its restraint in dimensions and design, but we nevertheless come across pieces from Amsterdam that depart quite spectacularly from this Dutch unpretentiousness. One explanation for this could be the fact that a great many wealthy merchants lived in Amsterdam and gave numerous commissions to the city’s silversmiths and other craftsmen. These nouveaux riches wanted to make the most lavish impression possible on their acquaintances. Objects had to be as opulent as could be, or at least more impressive than the pieces their neighbours and others owned. This kettle on stand is a superb example of this one-upmanship.
The round, pear-shaped kettle in Lambregts’s masterpiece is completely smooth with a slightly flattened body. The kettle is decorated around the neck and on the body with cast and applied ornaments of friezes and fleur-de-lis motifs. The tall lid is decorated with cast and applied lily-shaped ornaments around the beautifully executed knob. The high hinged handle is composed of C-scrolls. The spout is also elaborately decorated with foliar motifs.
The kettle stands on a tall stand with a spirit stove. The walls of this stand have openwork all round in a symmetrical pattern in Louis XIV style. The stove stands on three decorated C-shaped feet and has two hinged handles.
Literature:
Catalogue Oude Kunst en Antiekbeurs Delft 1962
Frederiks, Dutch Silver, vol. II, plate 267, p. 93
Nederlands zilver, 1979 cat. no, 112.