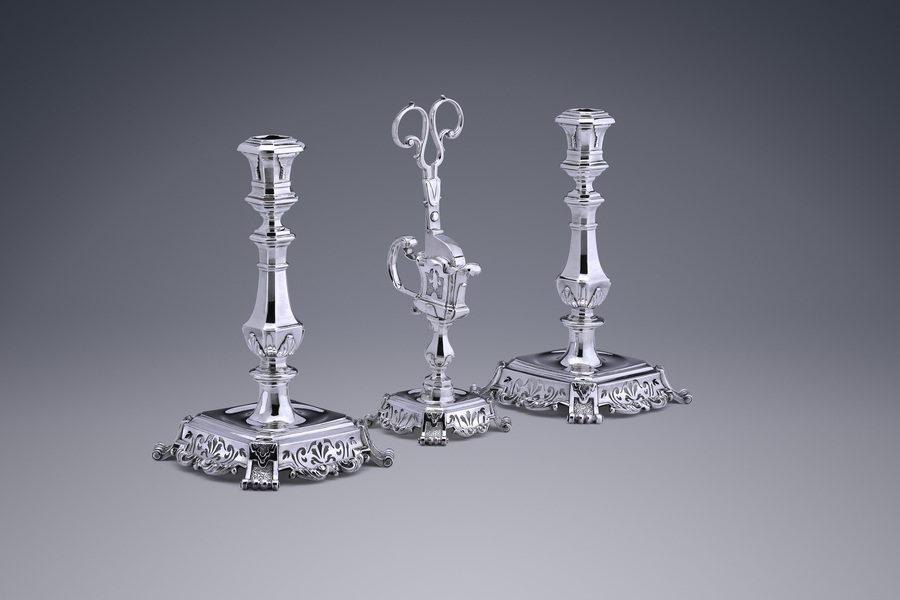 A Set of Candlesticks with a Pair of Snuffers

Eighteenth-century Dutch silver candlesticks with the accompanying snuffers and stand are extremely rare. The earliest known set dates from 1666, but in that case the snuffers are in a tray, not on a stand. The earliest surviving Amsterdam set dates from 1708. Aside from these two sets, only five other complete sets are known – all made in the first half of the eighteenth century in Louis XIV style. The exceptionally fine set pictured here was made by François Lambregts in 1726, likewise in the then current Louis XIV fashion. Like the foot and the candle-holder, the square baluster stem has chamfered corners. There is a foliar ornament at the bottom of the baluster and a frieze with tassels around the rim of the candle-holder. The most striking elements are the borders around the base of the foot. These have a symmetrical openwork pattern with cast ornaments along the lower edges. This pattern is derived from designs used to disseminate the popular Louis XIV style. One of the greatest designers of the age was Daniel Marot, a French Huguenot who had fled to the Netherlands. He also designed garden layouts. The exact lily and shell forms of the box hedges in his designs can be found in the ornaments incorporated in these candlesticks.
The candlesticks stand on gently scrolled feet with patterns on a textured surface. The snuffers sits on a stand with the same decoration. The handles of the snuffers are elegantly formed of C-scroll ornaments. The rectangular holder for the snuffers has moulded corners. There is a large fleur-de-lis ornament on a matt background on the long sides.