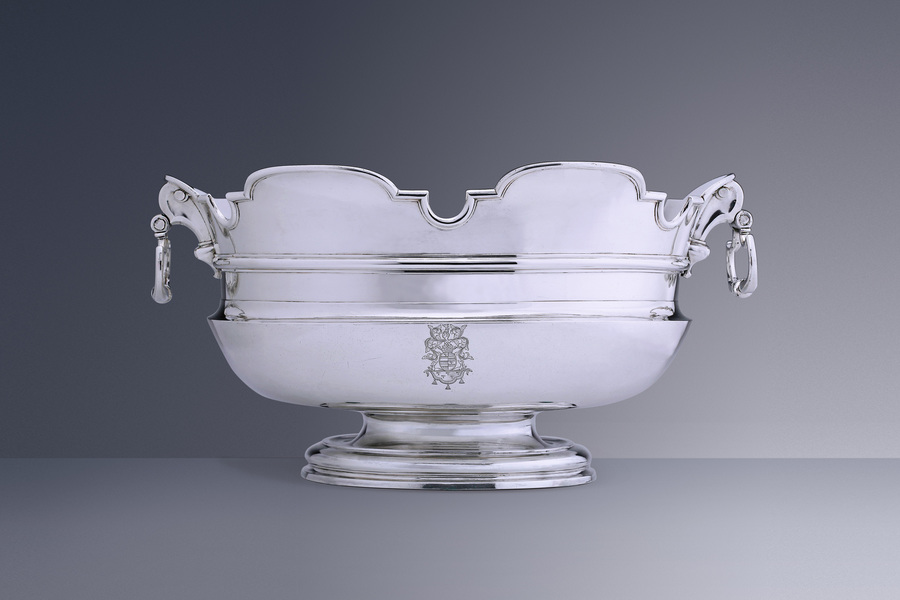 This impressive wine cooler is one of the earliest surviving examples of this model. Wine coolers were among the largest and most prestigious objects made in Dutch silver. They were usually made of copper, brass or pewter, and sometimes of earthenware, porcelain or marble. The most lavish examples, however, were made of silver and designed to impress. Prosperity was at a very high level in the Netherlands throughout the seventeenth century and for a large part of the eighteenth. Estate inventories from The Hague, Leiden and elsewhere reveal that many households at that time had one or more silver wine coolers. Because of the weight of silver in them, they tended to be one of the first things to be melted down when money was needed. In consequence, eighteenth-century Dutch silver wine coolers are now extremely rare. This superb example was made by the Hague silversmith François van Stapele. A cooler of this design is often described as a Monteith. The name derives from the shape of the rim, which consists of semi-circular indentations alternating with upstanding lobes linked by short horizontal lines. Lord Monteith, who lived in Perthshire, Scotland, in the second half of the seventeenth century, had a coat notched in this pattern at the hem.
Literature:
Exhibition catalogue: Haags zilver uit vijf eeuwen 1967, cat. no. 145
Haags goud en zilver 2005, p. 119 mentioned by cat. no. 35
Pijzel-Domisse, J. 2005, p. 316
Voet, E. Jr 1941, p 110