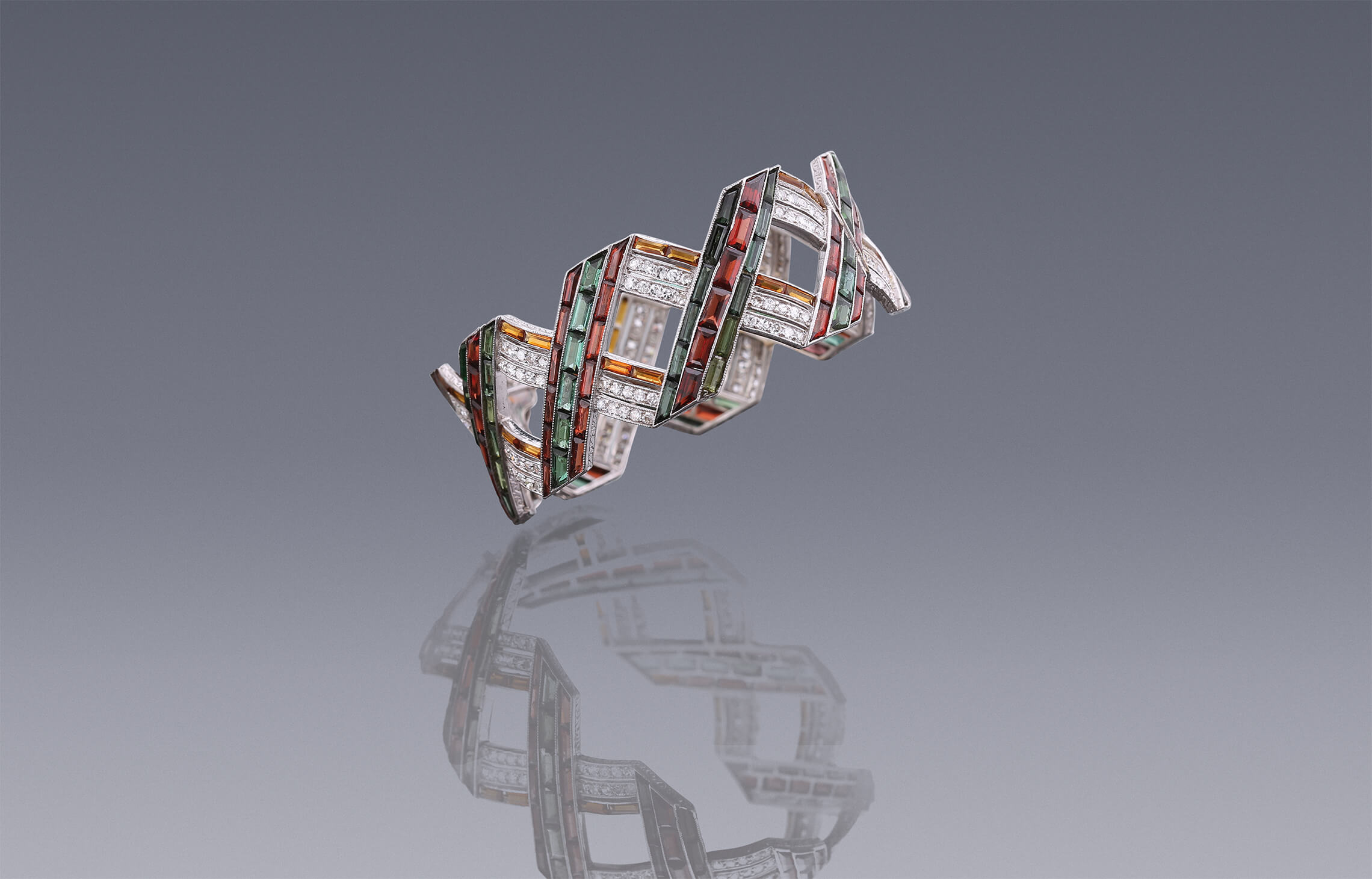 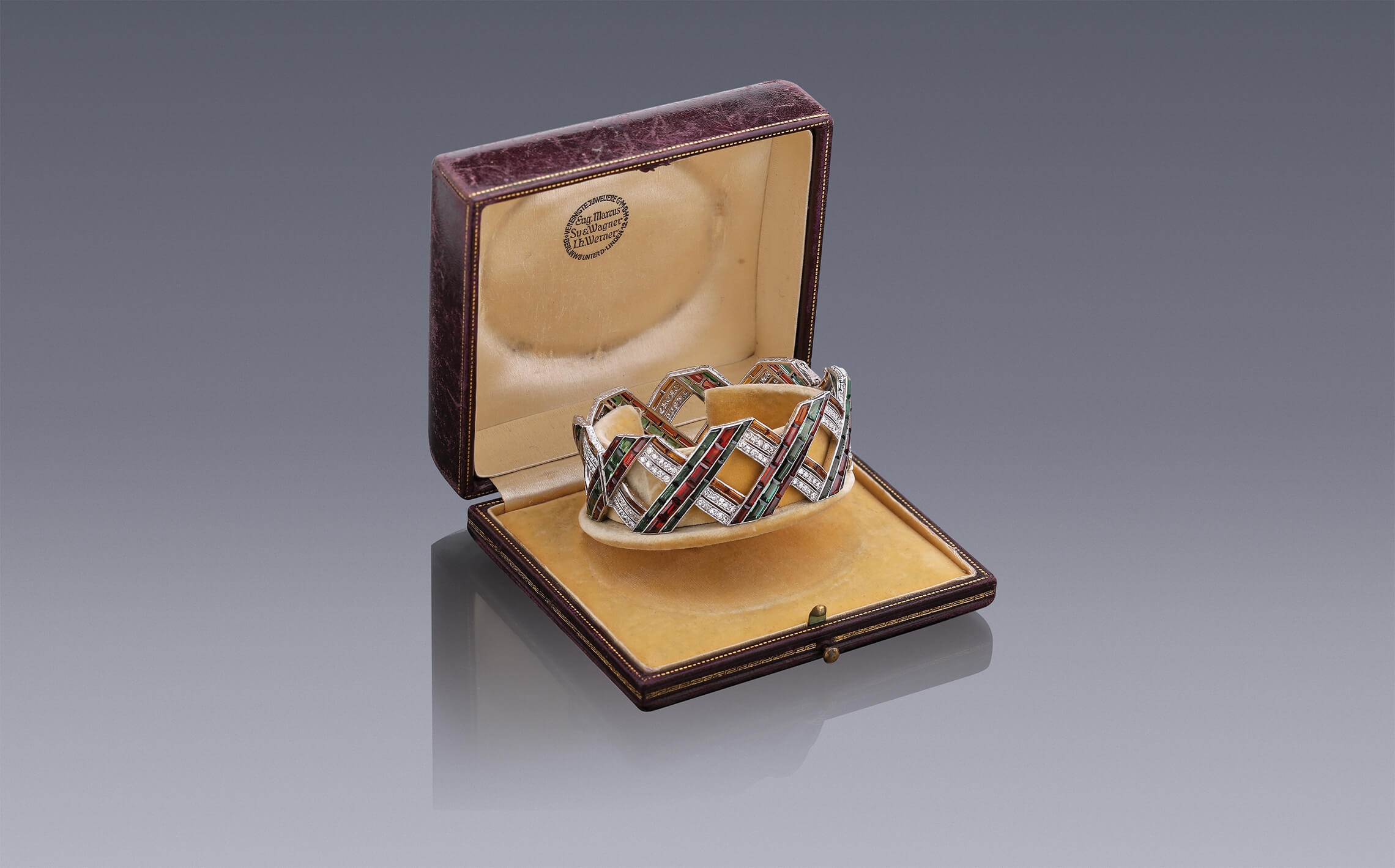 This art deco bracelet has a magnificent geometric diamond-shaped pattern. The stylized design consists of two bands that repeatedly cross one another and fold over like ribbons. The overlying ribbons are set with two rows of baguette-cut, bottle green tourmalines with a row of likewise baguettecut reddish-brown tourmalines between them. The underlying faces of the ribbon are set with a row of baguette-cut citrines and a double row of round brilliant diamonds. The bangle is kept in its original, custom-made and colour coordinated leather box , with the stamp of the firm of Vereinigte Juweliere, Eug. Marcus, Sy & Wagner & I.H. Werner, Unter den Linden 12, Berlin, inside the lid.

Although we only know of one other jewel with such a pronounced diamond-shaped construction, the diamond was much in evidence in fashion and interiors in the first quarter of the twentieth century. This bangle has very strong stylistic parallels to a tiara that Prince Ernst Louis, the last reigning Grand Duke of Hesse and by Rhine, gave his wife Eleonore, Princess of Solms-HohesolmesLich in 1905. Like this exceptional bangle, the tiara is not marked or signed. A competitor of Fabergé or the German court jeweller Koch have been suggested as possible makers. All three of the makers of this bangle, Marcus, Wagner and Werner, were also court jewellers. The tiara might very well have been made by one of them before they joined forces.

In the interwar years, a new style emerged out of all the political and social changes. The most important characteristic of this style was its embracing of technology allied to traditional motifs. The style, often with rich colours and geometric forms, was also a reaction to the organic ornamentation of Art Nouveau, known in Germany as Jugendstil. Architecture, interiors, fashion, accessories and particularly jewellery adopted the new design ideas. The great French jewellery houses led the way, designing bold avant-garde creations made in the costliest materials. This style was established in the 1925 Exposition Internationale des Arts Décoratifs et Industriels Modernes and acquired its name, Art Deco. Germany was not invited to take part in this important international French exhibition. Perhaps in response to this, the Germans developed an individual style that had little to do with French extravagance. Influenced by Bauhaus, among other things, this Neue Sachlichkeit—New Objectivity—was less concerned with pure luxury, aiming rather to translate the latest trends in modern art into jewellery. German clients looking for large pieces of jewellery in the French Art Deco style could find what they wanted in their own country. In Berlin, court jewellers Louis and I.H. Werner, Eugen Marcus, Margraf & Co, Sy & Wagner, H.J. Wilm, Emil Lettré and Herbert Zeitner made designs derived from Paris. German jewellery of this period is often more restrained and on a more modest scale. These were the pieces worn by the educated upper middle class, not commissioned by the monarchs and rulers of the world.

Marcus, Wagner & Werner Sy & Wagner went to work with the court jewellers Eugen Marcus and I.H. Werner, presumably a result of design initiatives in the late nineteenth century. It was then that progressive alliances of artists formed to gain greater recognition for the decorative arts, such as the Vienna Secession – from which the later Wiener Werkstätte evolved- and the Vereinigte Werkstätten für Kunst im Handwerk in Munich. In Berlin too, a small group of designers had formed around the progressive personalities of the court jewellers Louis Werner and I.H. Werner, who had premises at 173 Friedrichstrasse, the Kaiser’s favourite shopping street. Court goldsmith Emil August Albert Wagner learned his trade from Johann Georg Hossauer, to whom he was apprenticed from 1842 to 1846. As the leading Berlin goldsmith of his day, Hossauer received countless commissions rom the Prussian court. Hossauer had no male heirs, so in 1858 he handed over his business to Emil August Albert Wagner and the merchant François Louis Jéremy Sy (1827-1881). From then on, the firm of Hossauer traded under the name Sy & Wagner, apparently until 1933, from its shop at number 12 Unter den Linden. The firm of Eugen Marcus initially had his business first at number 31 and than at nr 81. Most likely these firms joined Sy & Wagner in 1934 under the name „Vereinigte Juweliere GmbH“.

Unter den Linden (Under the Linden Trees) is one of the most important avenues in the German capital. In 1575 this prestigious boulevard was the road that led to the Berliner Schloss. During his reign, Frederick William (1620-1688), Elector of Brandenburg and Duke of Prussia, known as the Great Elector, devoted his energies to improving and beautifying the city of Berlin. To improve the route between his castle and the hunting grounds of the Tiergarten he had a long row of linden (lime) trees planted. They also provided welcome shade. The street owes its name to these trees.47 The premises at number 12 were built in 190810 to plans by the architect Max Grünfeld. The unbroken row of columns suggests a temple façade. The decorations of cornucopia and putti with various attributes on the façade and above the supports of the ground floor allude to the wealth that the economic activity in this house will create.