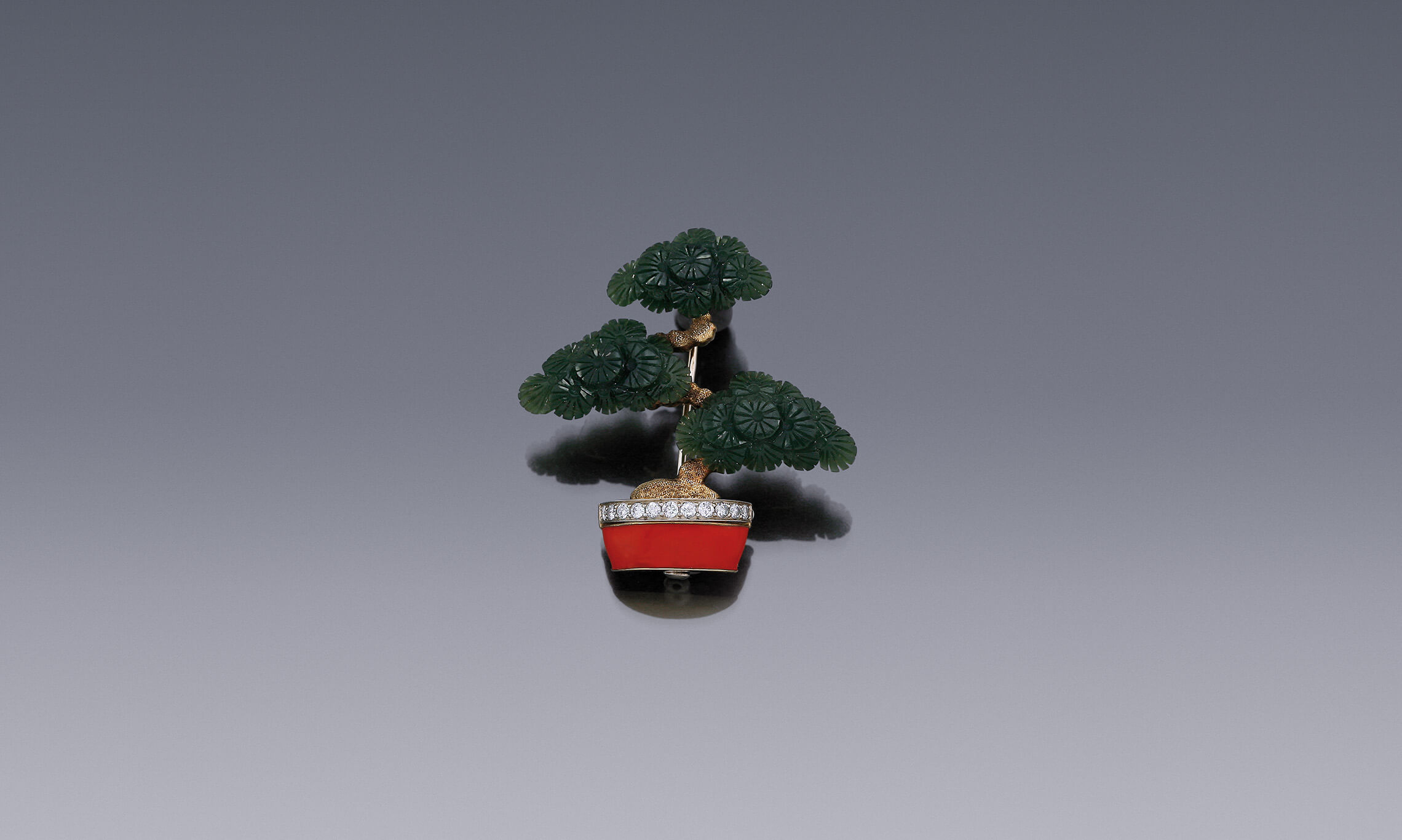 A Bonsai Tree Brooch by Paltscho

This elegant and delicate Art Deco brooch in the shape of a bonsai tree is made of cut nephrite, diamonds, eighteen-carat gold, white gold and enamel. The little tree stands in a low, coral-red enamel pot edged with diamonds. The brooch is Austrian and the maker’s mark, which is only partially readable, is that of Ernst Paltscho.

Bonsai is a fascinating art form, a unique combination of horticultural and aesthetic aspects. Bonsai art originated in the Chinese Empire and was adopted by the Japanese and developed into what we now call the ‘bonsai tree’. Bonsai literally translates as ‘planted in a tray’. The Chinese began creating miniature landscapes two thousand years ago. In the first century CE, Chinese Taoists used miniature gardens for contemplation and meditation. The greater the difference in scale between the original landscape and the miniature version, the more powerful the spiritual effect. It was not until the Kamakura period (about seven centuries ago) that the Japanese embraced this art and adapted it to their own customs and traditions. A clear Japanese style developed, more often featuring an individual tree than a complete landscape. These are what we now call bonsai trees.

Jade is in fact a catch-all title for two chemically different substances that are physically similar. Jadeite, which comes exclusively from Burma, is by most accounts the more prized of the two. Nephrite, which traditionally comes from western China, was in use long before jadeite became popular. Only jadeite jade and nephrite jade are recognized as true jade. The costliest and most sought-after jade (Burmese jadeite, Burmese jade, 'Imperial' jade or Chinese jade) usually comes from Myanmar (previously Burma), but jade is recovered in small quantities in Guatemala, Mexico and Russia. Three-quarters of all the nephrite jade on earth comes from the mines of British Columbia (on the Canadian west coast), Taiwan, the United States and (in small quantities) Australia.

In the first quarter of the twentieth century, ideas travelled with the speed of motor cars and planes. Creators renewed their repertoire of forms in conjunction with fashion styles in dress. The twenties woman with her androgynous looks was ready for the renaissance of jewellery. Gem cutters obtained hitherto unknown effects from precious stones and they did not hesitate to cut into the range of hardstones—onyx, lapis lazuli, malachite, turquoise, coral, jade and nephrite jade, which is used in this brooch. Jewellery designers were also inspired by distant civilizations. The taste for the exotic and the fascination exerted by the East were not recent phenomena, but the number of magazines and books now available on the subject offered the opportunity for increasing familiarity with foreign modes of artistic expression. The lapsed interest in Japanese art was once more revived and offered European artists a new source of stylistic motifs, as evidenced by this refined brooch in the shape of a bonsai tree.

Ernst Paltscho (1858-1929) went to work in his father Carl’s jewellery business in Mariahilfstrasse at the beginning of 1881. He was appointed jeweller to the Greek Royal House and worked for many of the Austro-Hungarian aristocracy. In 1914 he moved to the First District, the centre of Vienna, with partner Emil Biedermann in 1914 under the name Biedermann & Paltscho. The business was continued by his son, Erwin, who joined the firm in 1918. Paltscho participated in all the important exhibitions, notably in London in 1934 and the World Expo in New York in 1964. He is known for spectacular pieces of jewellery with colourful and fancy cut gemstones.

Marked with the Austrian content mark for eighteen carat gold and the maker’s mark, partially readable, E.P, for Ernst Paltscho 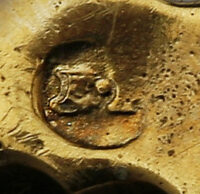