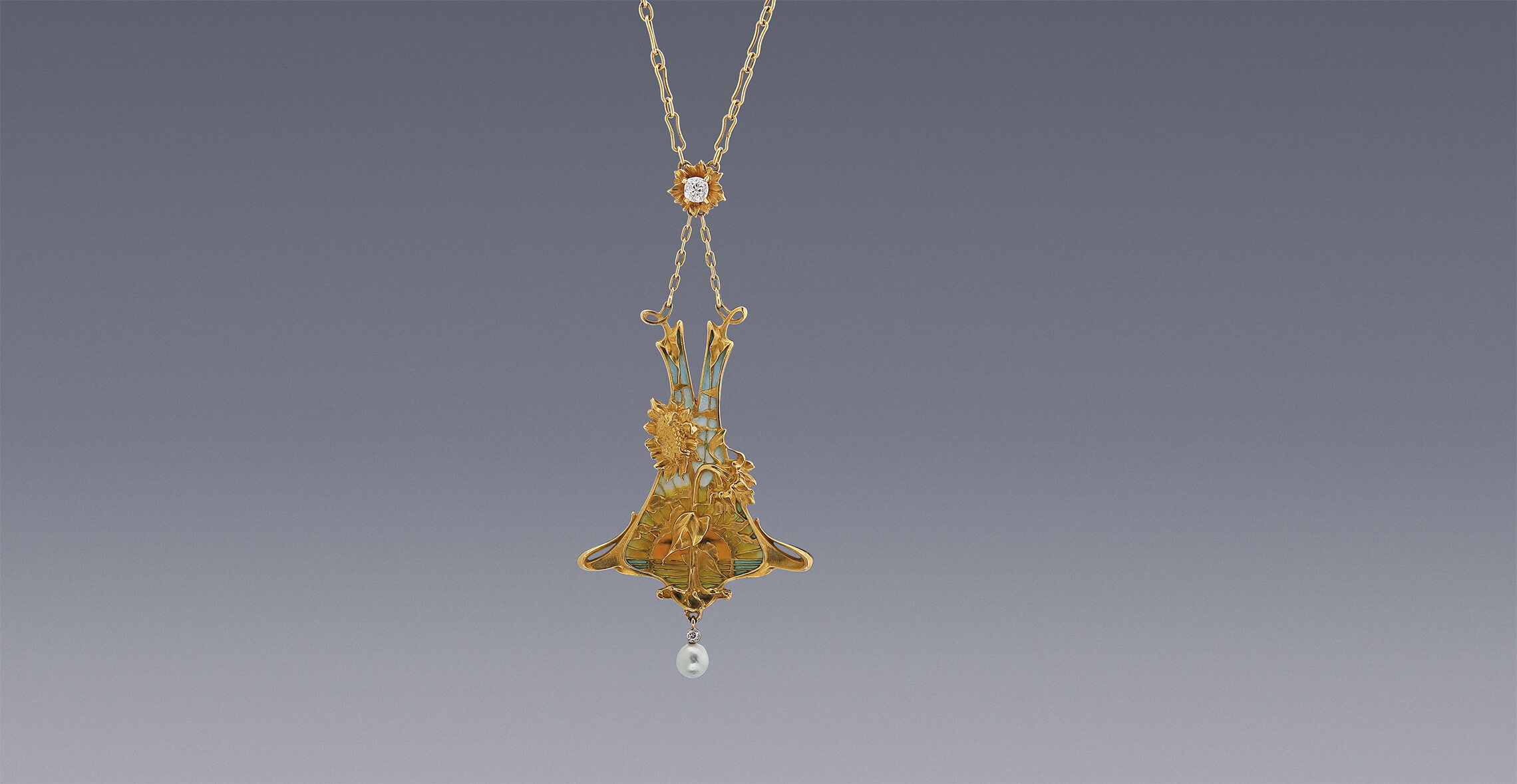 This highly sophisticated Art Nouveau pendant was made around 1900 by the French goldsmith Léopold Gautrait in eighteen-carat gold, diamonds, plique- à-jour enamel and a natural pearl. The basic triangular shape contains two sunflowers against a background of a sun in plique-à-jour enamel sinking into the sea. Gautrait’s eye for detail is evident here. Elegant pieces with flared lines are typical of this contemporary of Renée Lalique. The top of this pendant is gracefully divided into two, with the stems of the gold leaves at the ends curling to form the eyes for the chains. The sunflowers in the centre of the pendant are amazingly natural. The relief of the leaves and the flowers is so deep that they appear to stand away from the plique-à-jour enamel background. The two parts of the original open-link chain come together above the pendant in a gold sunflower set with a brilliant old cut diamond. Below the pendant hangs a natural pearl from an eye with a second brilliant cut diamond.

Sunflowers have been known for many centuries. The Incas in South America worshipped the flower as a symbol of their sun god. The seeds were edible and they used the oil they obtained from the seeds in cooking. At the end of the Middle Ages the Spanish conquistadors brought the flower back to Europe and since then we have also associated the sunflower with the sun and summer. The scientific name of the sunflower, Helianthus, says it all: Helios means sun and Anthos is flower. The sunflower rapidly gained popularity in Europe. The yellow flower turns to follow the sun so that the plant has even acquired a Christian meaning—man turning his face to the light (Christ).

This pendant reflects the importance of symbolism in Art Nouveau. The sunflower symbolizes happiness, adoration, joie de vivre, admiration and ceaseless devotion—the last meaning derived from a Greek myth. Clytie was one of the three thousand Oceanids in Greek mythology, a daughter of Tethys and Oceanus and in love with Helios, also referred to as Apollo, the sun god. But he abandoned her for the nymph Leucothea. In her rage, Clytie told Leucothea’s father, Orchamus, about the affair and he had his daughter buried alive because she was no longer a virgin. When this did not drive Helios back into Clytie’s arms, she gradually pined away. She was so in love with Helios that she spent all day from sunrise to sunset staring at the sun as it moved across the heavens. But Helios did not see her and so, taking pity on her, the gods turned her into a sunflower. Art Nouveau This innovative movement in art flourished in several parts of Europe between 1890 and 1914. Depending on the country in which it was made it was known by different names: Arts and Crafts in Great Britain and the United States, Jugendstil or Secessionist in Germany and Austria. In France it became known as Art Nouveau, taking its name from the gallery L’Art Nouveau that Siegfried Bing opened in Paris on 26 December, 1895. Art Nouveau introduced a new vocabulary into the repertoire of jewellery with its sensual curvilinear forms, dramatic imagery and a poetic symbolism based on new ideas concerning the role of the unconscious.

One of the main catalysts in the development of Art Nouveau, which reached its pinnacle around 1900, was Japanese Art. Artists were looking for new artistic ideas and forms as a reaction both to the nineteenth-century obsession with the past and the inferior machine-made, artless products on the market. Many artists were fascinated by the Japanese art that had just reached Europe, in which flora and fauna were subtly represented. Symbolism was widely used. Japanese floral motifs—bamboo, cherry blossom, peonies, irises and chrysanthemums—were incorporated in designs using the flowing lines and asymmetrical compositions typical of the period. Woman was another favourite subject in Art Nouveau—from naked wood nymphs to charming, dreamy femmes fleurs, to girls pictured in profile wearing a demure little cap. The designs also often feature creatures like birds, dragonflies, snakes and there are even clouds, pools and rocks, sometimes combined with slender figures of women. In the Art Nouveau period, the artistic merit of a design was more important than the intrinsic value of the materials used. Nevertheless, precious materials were not shunned. Every piece of Art Nouveau jewellery can be regarded as a miniature work of art.

Léopold Albert Marin Gautrait, pictured above in his atelier, was born in Roullée, France, on 16 October 1865, the son of Clovis Gautrait and Modeste Marie Madeleine Loyer. He trained as a modeller-chaser under Charles Joseph Roufosse at the Ecole des Beaux-Arts in Paris. Gautrait initially set up shop at 105 Rue des Dames in Paris and later in Rue Rivay in Levallois-Perret, a suburb of Paris. In 1895 he made a vase, The Four Seasons, which is now on display in the Musée des Arts Decoratifs.28 As a modeller and chaser, he designed and made pieces for the great Parisian jewellery houses of the time, including Vever. He worked for longest with Léon Gariod, from 1897 to 1920. The best known is his pendant with a peacock motif that the Victoria & Albert Museum bought at the Expostition Universelle in Paris in 1901. The jewels created during this collaboration, like this pendant, bear Gautrait’s signature and Gariod’s maker’s mark. Around 1905, his style changed and he made countless bracelets, pendants and necklaces inspired by the Louis XVI style, then known as style Guirlande. Gautrait was married to Marie Louise Mansuy and they had two daughters, Hélène Louise and Germaine Leopoldine. He died in Paris in 1937.