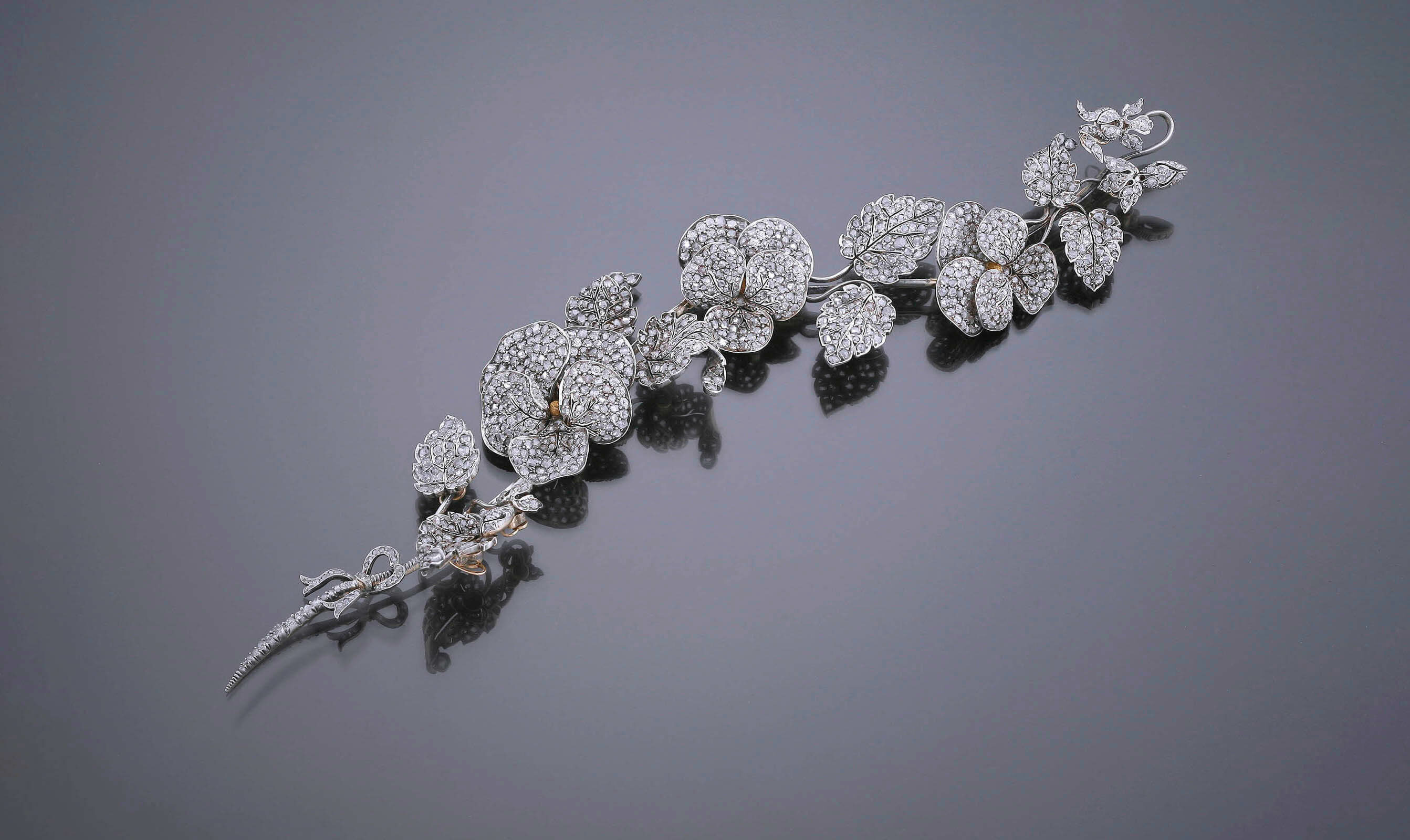 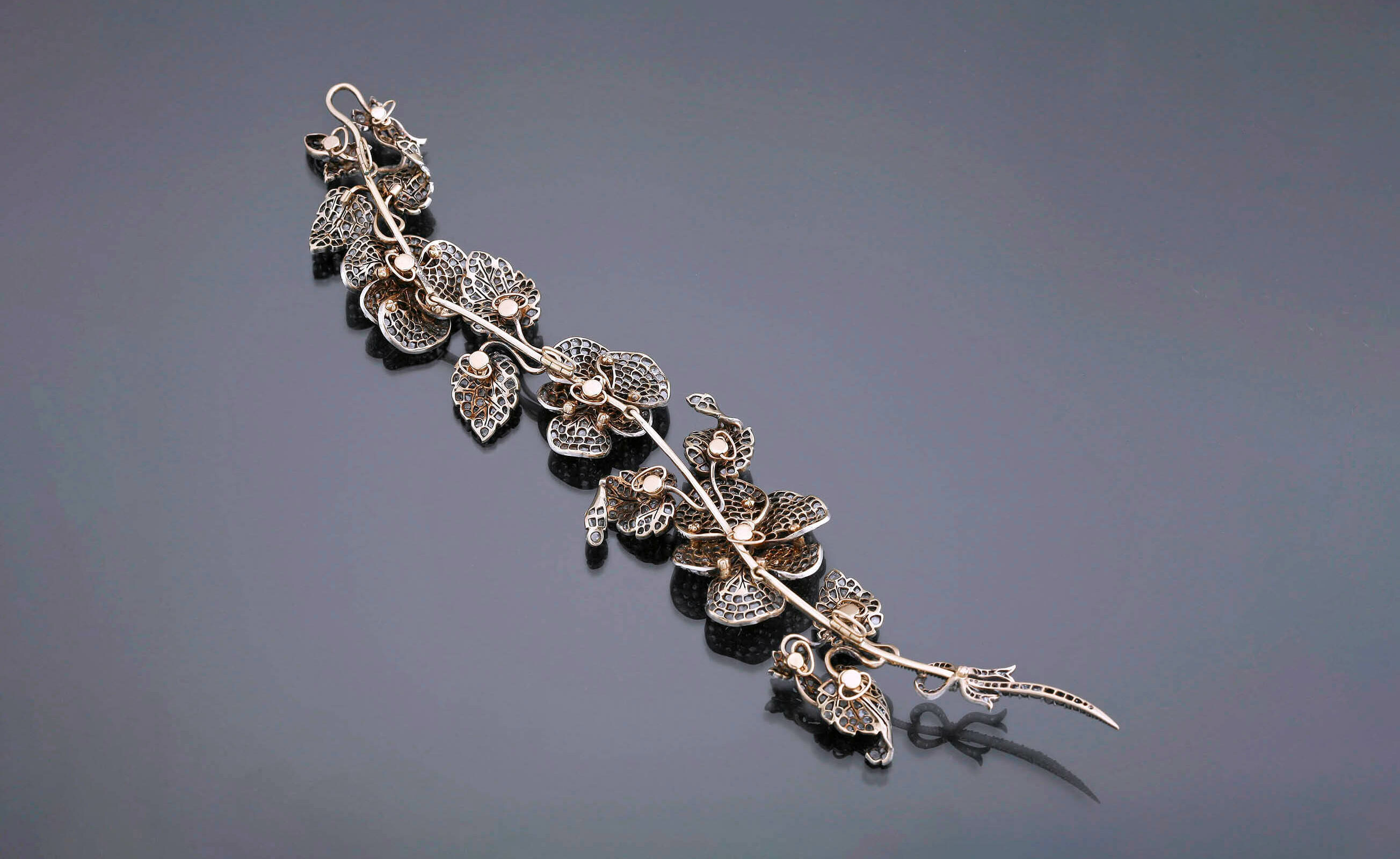 This important corsage ornament with naturalistic violets is made of gold on silver, fully set with rose-cut diamonds. The beautifully executed stem begins with a ribbon ornament and ends in two buds. There are three violets on the 23-centimetre-long stem, one larger than the other two. The royal jeweler Confalonieri who was appointed to the King of Italy, the King of Spain and the King of Portugal, certainly shows off his skill and craftsmanship in this three-dimensional jewel. There is movement in every leaf and petal; some even curl. It is a superb example of the fashion in jewellery in the Late Romantic Era.

The second half of the nineteenth century saw extremes in dress and jewellery and a change in the position of women. Crinolines became so large that women could not get through a normal door. Waists had to be so tiny that corsets were laced ever tighter, sometimes with a broken rib in consequence. European women began to occupy a more powerful position in society. They started to make themselves heard in political and commercial life, and the pale, decorative female figure disappeared. They were also allowed to study and in 1870 gained the right to keep for themselves the money they possessed or had earned. This growing awareness was also expressed in jewellery, which became more striking, larger and more substantial.

Diamonds leapt in popularity in 1867, when the first South African diamonds were found in the town of Kimberly, on the border of the Orange Free State and British territory. Europeans flocked to South Africa to prospect for more precious stones and diamond fever ensued. The diamond mines opened there produced great quantities of diamonds, making them less valuable. For the first time people other than royalty could afford the splendour of jewels composed solely of diamonds. Wealthy citizens were quick to take advantage. Jewellery became ever larger and more expensive, in part because high fashion around 1880 demanded it. The coloured stones that had been so highly prized in 1860 were now regarded as flashy.

Throughout the nineteenth century a series of historical styles had put their stamp upon the various arts, beginning with the neo-Gothic revival of around 1820 and passing through neo-Renaissance and neo-Baroque influences before culminating in a resurgence of the Louis LXVI style in the 1890s.
Pictorial records and pattern books made it easier for jewellers to borrow motifs from earlier centuries. The pattern books of the eighteenth century—Louis XV and Louis XVI—covered flowers, wreaths, garlands and vases, but at the end of the 19th century new studies on plants and flowers also appeared, and together these provided inspiration for jewellers. Plants and flowers were ideal subjects for the absolutely true to life representations that were the height of fashion at the time. Around 1865 jewellers started to make whole branches entirely in diamonds, as we can see in this distinguished jewel.

All over Europe flower and blossom motifs were popular in jewellery. In France, for instance, among the blossoms in Cartier’s lavish displays, were wild roses, narcissi, violets, poppies and marguerites. The most famous floral brooches in the shape of three-dimensionally modelled wild roses were produced by Cartier’s rival, Oscar Massin (1829-1913). He is seen as one the mentors of the 19th century jewellery, due to his creativity and his technical innovations and many pieces were created in manner of Massin. This beautiful and delicate corsage ornament by the Italian jeweller Giuseppe Confalonieri is an outstanding example of this fashion.

Three diamond-set pansies are mounted on the jewel. This flower is a member of the Violaceae family, which has around four hundred species found in temperate regions. The violet is one of the symbols of spring. Because it is small it also stands for hidden beauty, virtue, modesty, and fidelity. It was often used in jewels as a symbol of faithful love—pensee à moi, reflected in the English name of this member of the family, the pansy. It is also known as heartsease. The fragrant wood violet was the favourite flower of Joséphine de Beauharnais, Napoleon’s wife. Her wedding bouquet was a nosegay of violets. The flower grew in abundance in her garden, and she had them in vases all over the house.

Until the early nineteenth century diamonds were always set in silver, because it was thought that the stone looked better against it than in a coloured setting. In the Victorian age, however, people felt that silver was not valuable enough for setting precious stones, and so jewellers began making settings that were silver on gold, like this spray. Moreover the silver, which oxidises, now did not touch the skin anymore which was also an advantage. The rose-cut diamonds in this corsage ornament are open set, in other words they are also visible from the back.
Looking at the jewel from the back, which is gold, it can be seen that the violets and the leaves are all removable. They can be mounted on a tiara, with the largest violet in the centre. In three places on the back of this corsage ornament there are hinged oval rings. A seamstress would use them to sew the spray on to a gown.