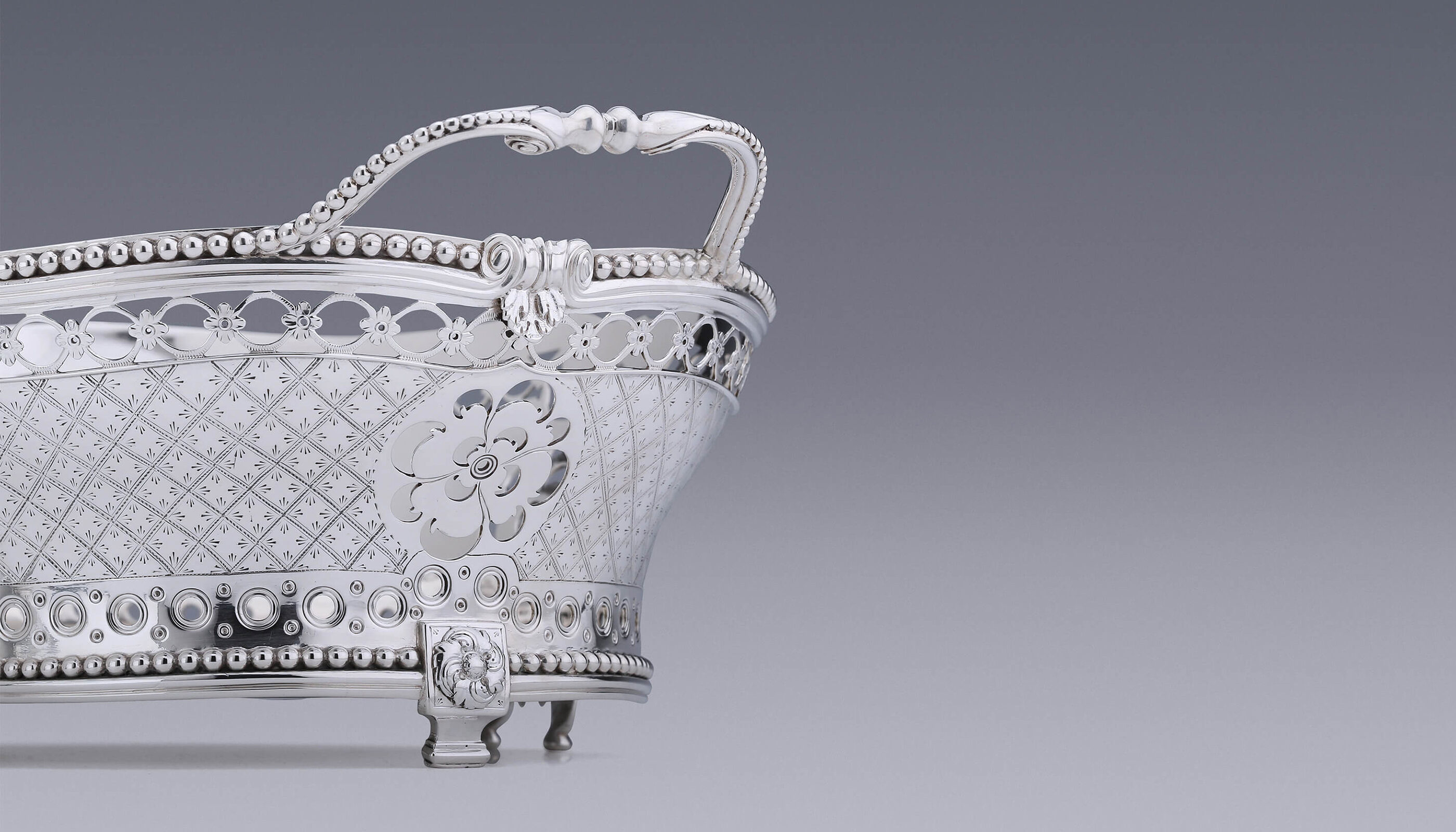 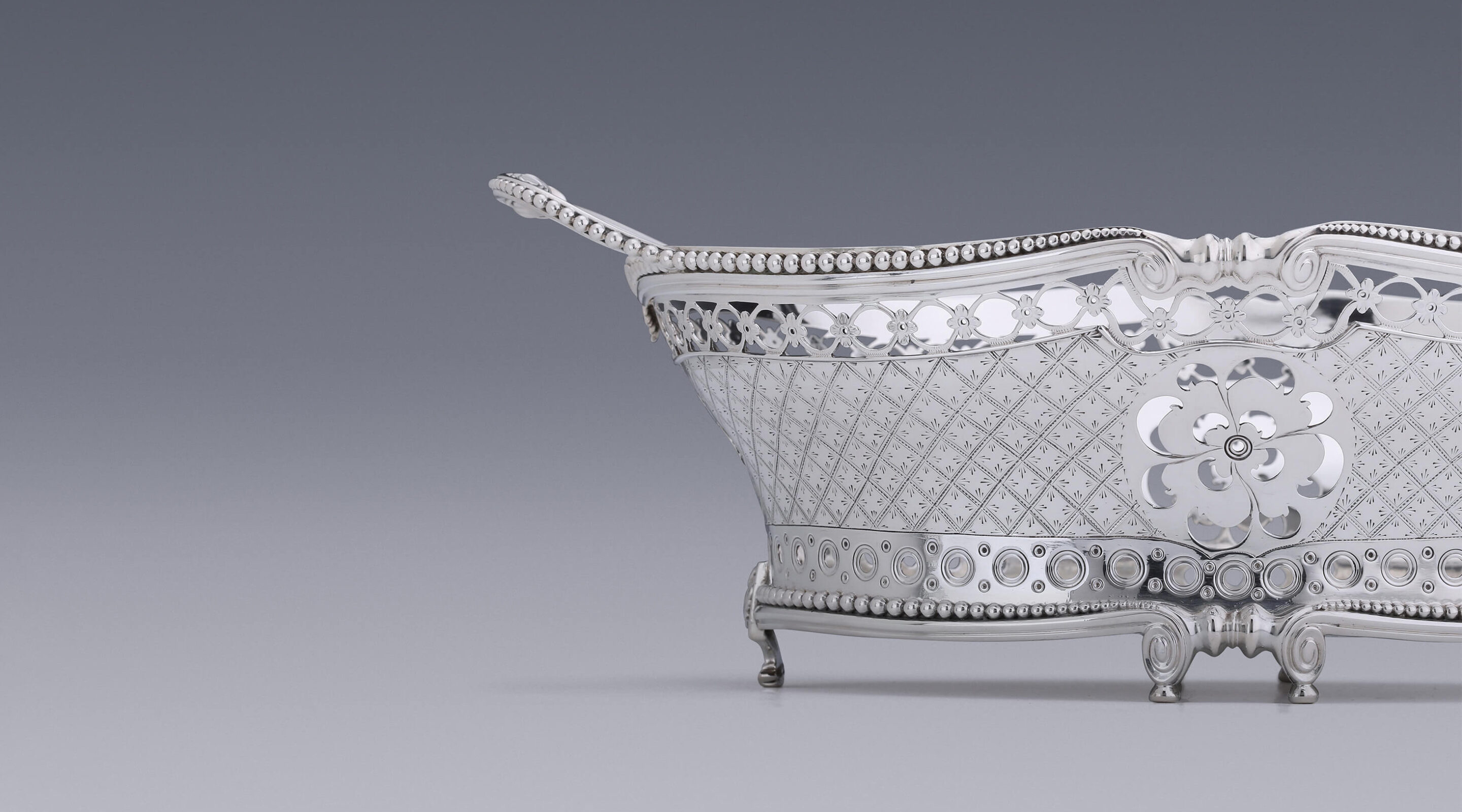 The design of this exceptionally heavy bread basket is very unusual. The basket has four eye-catching openwork floral motifs in the centre of the sides and two openwork borders of ovals along the upper and lower edges. The slightly flared sides of the basket are completely closed and decorated with a finely engraved lattice of the type known as diaperwork, creating the illusion of basketry. There are surprising, subtle, elegant details, such as the tapering beading above the moulded borders at the top and bottom. Each bead was filed individually from a thick silver wire. It takes superb craftsmanship to do this so uniformly and end up precisely with a whole bead. The moulded edges of the upper and lower border have a scroll in the middle of each side. There are four square feet with a floral motif on the short sides. An identical, somewhat lighter basket made by Stridbeck in the same year is in the collection of the Martens Mulder Stichting.

Baskets like these are described in eighteenth-century inventories as a bread basket or broodben. The term ‘ben’ was the usual name for a wicker basket. These baskets came in all shapes and sizes and were used for carrying, storing or presenting things. They were indispensable in every household. In some Dutch dialects, the word ben is still used for a flat basket with two handles, occasionally specifically for a bread basket. England was the only other place in Europe to make silver baskets, but the English versions are a different design.

The earliest known baskets in precious metal were christening gifts or layette baskets, or were used at a wedding to hold the couple’s wedding gloves. They are prestigious objects, usually status symbols, and very few have survived. The silver bread basket is a typically Dutch piece that first appeared in this form around 1747. Examples made in The Hague are the earliest and may have been inspired by English forerunners. Those are rounder, though, and have a hinged bow handle instead of two handles at the ends. Although bread baskets often turn up on inventories, the basket was also used for other things, such as cake, sweetmeats, fruit and comfits.

Nowadays bread is an integral part of the Dutch diet. It is eaten at breakfast, for lunch or with soup as a simple supper. This type of cold meal was introduced in the late Middle Ages, but by no means everyone ate bread. Rye bread with butter, cheese and beer was chiefly a meal for invalids, children and students. Until the nineteenth century, the majority of the population ate gruel, waffles or pancakes. After 1750, the grain from which bread flour is made became so expensive as a result of war and population growth that the potato became the staple food of the poor. Bread, particularly made from wheat flour, was a luxury that only the wealthy could afford.

Svante Stridbeck was born in Harslöv, Sweden, in 1737. His parents were Lars Stridbeck, a lieutenant in the cavalry, and Catharina Helena Balck. Between 1751 and 1757 Stridbeck was apprenticed to the silversmith Ertman Wallman in Landskrona. In 1762 he became a journeyman and from 1763 to 1776 he worked as a master in Stralsund in Pomerania. His brother Andreas was a jeweller in Lund, Sweden. Around 1780, Stridbeck settled in Amsterdam, specializing in large pieces. His work bears some resemblance to that of his compatriot, Johannes Schiotling, but there is no evidence of any collaboration between the two workshops. A note in the guild’s minute book reveals that Stridbeck produced work for Cornelis Leonard Diemont (c. 1752 – c.1801), who was a silversmith and also ran a shop with this brother Willem Diemont. It also emerges from the minutes that Stridbeck’s work was quite often rejected between 1786 and 1794. He died in 1797.

Marked on the underside of the basket with the Amsterdam city assay office mark, the Dutch lion, the date letter W for 1781 and the maker’s mark S.S in a rectangle for Svante Stridbeck.
Re-assay mark Y at the top of the base (The Hague, 1795) 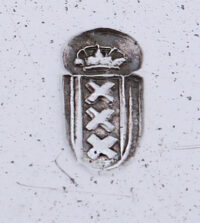 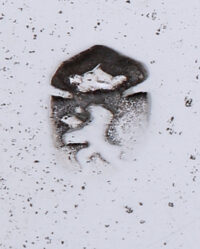 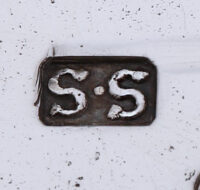 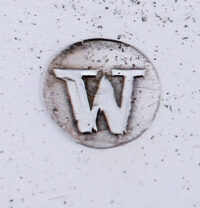