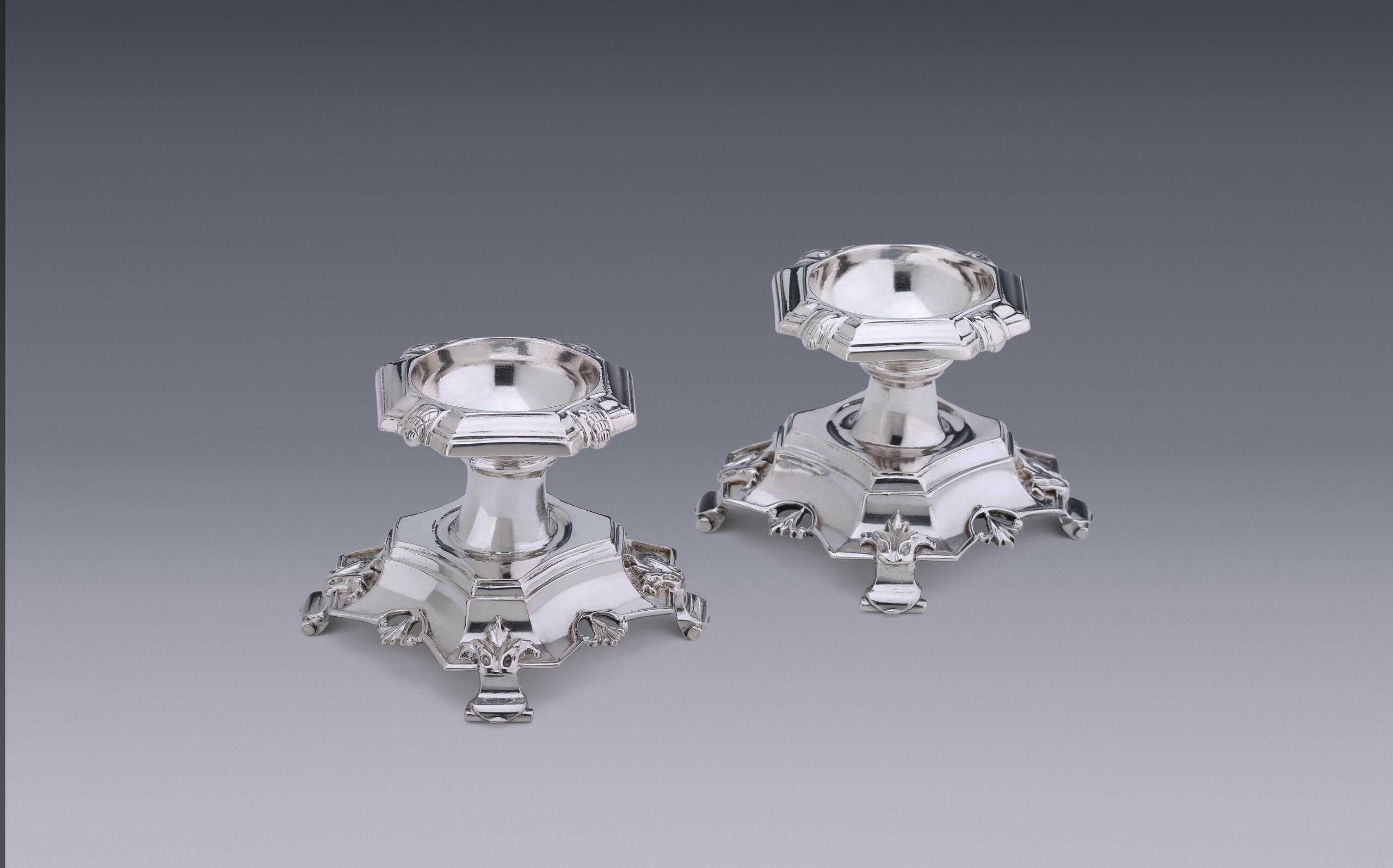 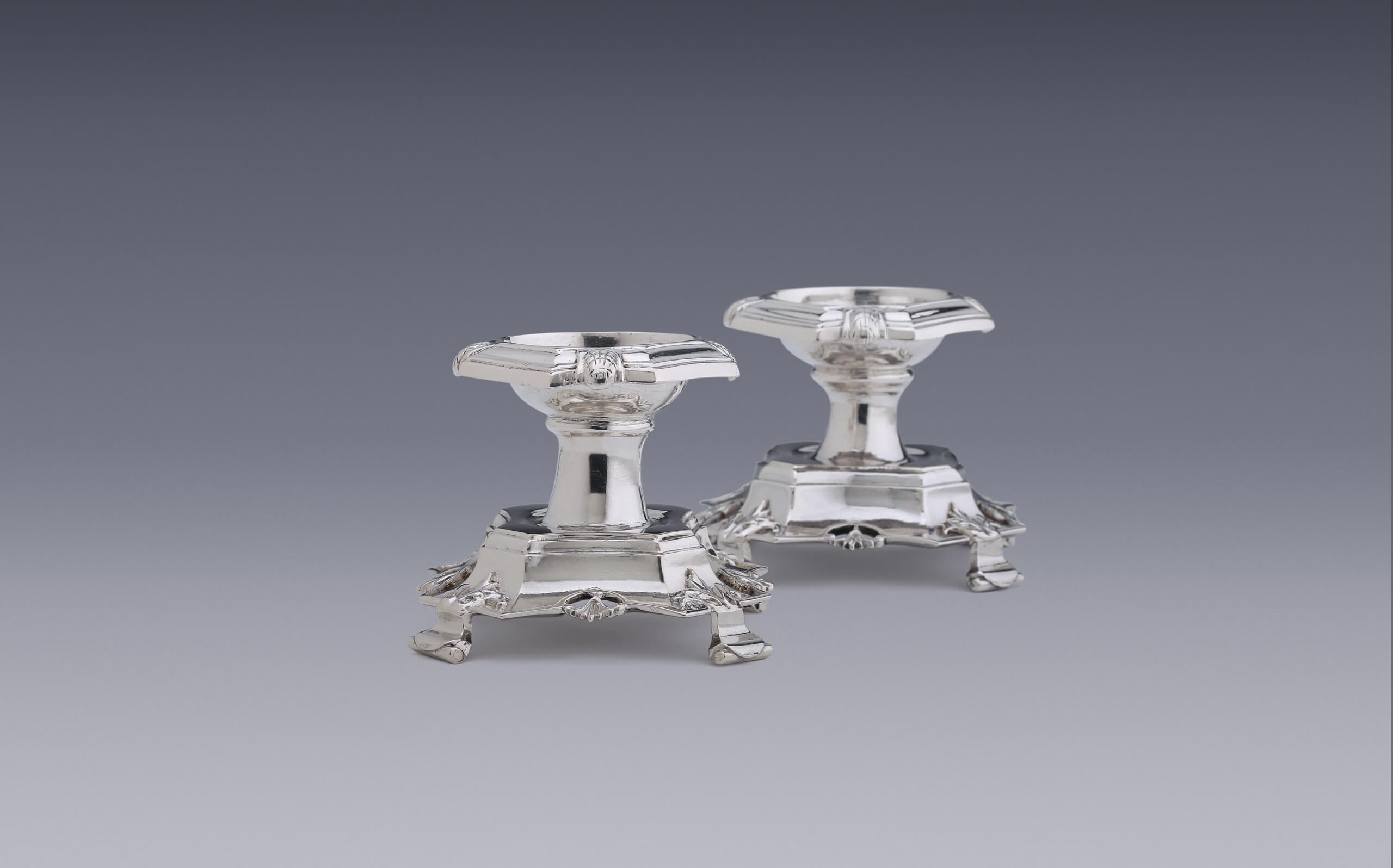 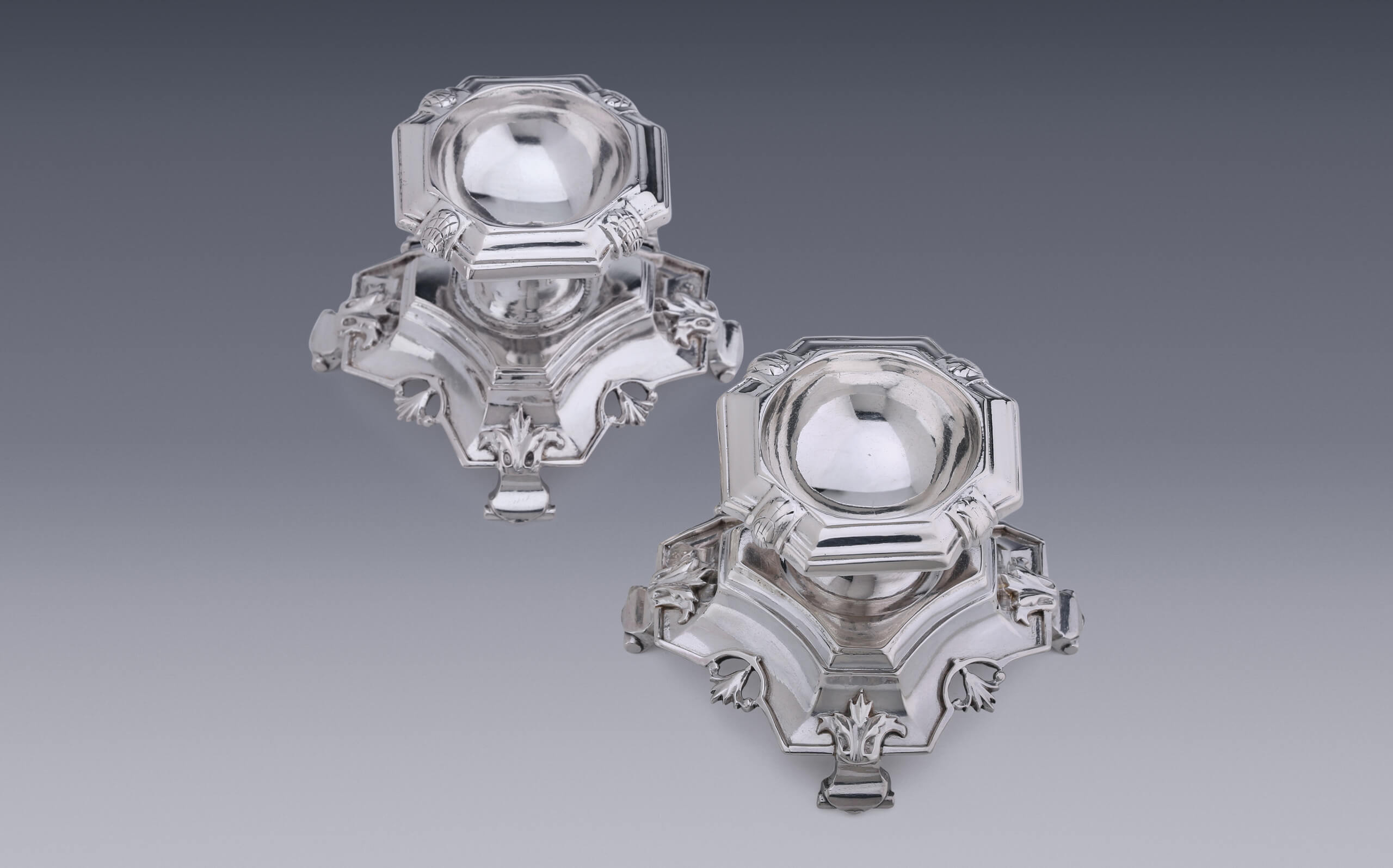 A Pair of Silver Salt Cellars

There are surprisingly few remaining silver salt cellars dating from the first half of the eighteenth century, when salts were still being made entirely of silver. This nicely heavy pair by François Lambregts is a very fine example; this set is therefore now very rare.

This elegant pair of salts have a moulded base resting on four scroll feet. The base has a cast border and is decorated with stylized fleurs-de-lis on the feet, and ornaments in the shape of free-standing fleurs-de-lis on the concave sides of the feet. A round, waisted, plain stem stands on the base. On top is the round, hollow well for the salt, with a moulded square edge. There are shell ornaments on the inward-curving sides of the base.

Salt is essential to the health of humans and animals alike to balance fluids in the blood and ensure nerve and muscle function. From the beginning of agriculture (c 6000 BCE), when people began to eat more plant-based food, salt became immensely important—as an addition to food, as seasoning, and to preserve perishable foods like meat and fish. Salt was not obtainable everywhere, so demand outstripped supply. This made salt an important economic factor. Whole wars were fought over regions where salt could be scooped up.

In Europe it was the Celts who first used salt as a currency and means of exchange. They dug salt up in mines and traded it with the Romans. The Romans adopted the use of salt as currency and even paid their officials and soldiers partly in salt. The Roman soldiers guarded the salt transports as vigilantly as we guard money transports today. The Latin for salt is ‘sal’, from which we get the English word salary. ‘Sol’ in the word soldier stands for the salt with which he was paid. Names of towns and cities—like Salzburg—refer to the presence of salt mines. The principal road into Rome was the Via Salaria or salt road. Whole economies revolved around salt. It comes as no surprise that owning salt was a considerable status symbol.

The earliest inkwells date from Ancient Egypt, where the members of the highest caste got their subordinates, the scribes, to write on papyrus scrolls and stones. Bowls, jugs, glass bottles, as well as shells and the horns of cows and goats were used to hold ink. The first luxurious ink stands, consisting of an inkwell, a sand caster and a penknife on a tray, date from the fifteenth century. Ink was kept in the inkwell, salt or sand was used to help the ink dry more quickly and absorb surplus ink. The penknife was used to sharpen the point of the quill pen or scratch ink blots off parchment or paper. The ink stand was an essential part of the studiolo, the study for clergy, magistrates and rulers. The one for clergy and magistrates was simply furnished, but the royal studiolo was very lavishly decorated.

From the sixteenth century onwards, works of art were made to hold the salt. People who could afford it—chiefly monarchs and other rulers—attached great importance to displaying a fine, impressive container for salt on the table and commissioned them from craftsmen. A salt cellar made of precious metals was obviously the most impressive. It was, after all, money in a different form. It was customary to place the salt before the most important guest at the table to indicate his status. Sometimes there would be more than one silver salt cellar on the table, but the largest and most impressive would be placed by the plate of the master of the house or that of the most distinguished guest. In England it was sometimes called a ‘master salt’.

Each guest had their own salt cellar. Aside from the diplomatic function of these personal salt cellars
- everyone was now important -
he also demonstrated his own importance.

The ultimate salt cellar was made by the renowned Italian silversmith Benvenuto Cellini (1500-1571) for the French king Francis I. It is now in the Kunsthistorische Museum in Vienna. The huge gold and enamel salt cellar is an allegorical representation of land and sea. More than a century later, Louis XIV (1643-1715) commissioned a design for a table setting. Each guest had their own salt cellar. Aside from the diplomatic function of these personal salt cellars—everyone was now important—he also demonstrated his own importance.

By the second half of the seventeenth century, the growing prosperity in the Dutch middle class enabled them to purchase silver salts more frequently. Salt cellars are found in numerous models and sizes. Inventories tell us that in the seventeenth century there were households that owned six or more salts, by the second half of the eighteenth century the number rose to as many as twelve and around 1800 even sixteen. These would have been the round blue glass dishes in a decorative silver mount. In mainland Europe it was the ultimate expression of wealth to be able to place a salt by every plate. Sadly, no large sets of this kind have survived.

There are surprisingly few remaining silver salt cellars dating from the first half of the eighteenth century, when salts were still being made entirely of silver. This nicely heavy pair by François Lambregts is a very fine example; this set is therefore now very rare.

François Lambregts was born in 1696 to the tinsmith Salomon Lambregts and his wife Sara de Goyer. In 1720 he was registered as a silversmith in Amsterdam, the same year he married Johanna Dutoit. He had a workshop in Tichelstraat until 1742, when he moved to Haarlemmerstraat.

In 1732 he was master-in-chief in the Amsterdam silversmiths’ guild. He died in 1751. François Lambregts was one of the most important Dutch silversmiths in the first quarter of the eighteenth century. He was recorded as a tableware maker, whose pieces included candlesticks and coffee pots. There are very few known works by Lambregts. It is clear from the quality of these objects that Lambregts was a great designer and technically extremely skilled. Museum Boijmans van Beuningen holds a pair of fine salt cellars and an impressive tea kettle. The other known pieces, including an important silver tea chest with three silver caddies, a very elaborately decorated water kettle on stand and a pair of candlesticks with a snuffer, are in private collections. Strikingly, all the surviving pieces were made around 1730.

Both salt cellars are marked on the underside with the Amsterdam assay office mark, the Dutch Lion, the maker’s mark FL for Francois Lambregts and the date letter V for 1731. The number 2 is engraved on the underside of the foot of one salt and 5 on the other, from which it can be deduced that these salt cellars were originally part of a set of at least six pieces. 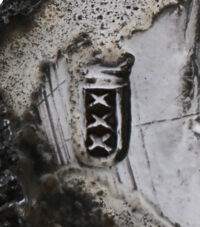 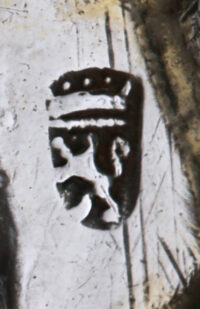 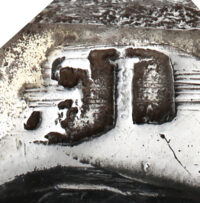 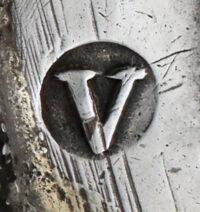