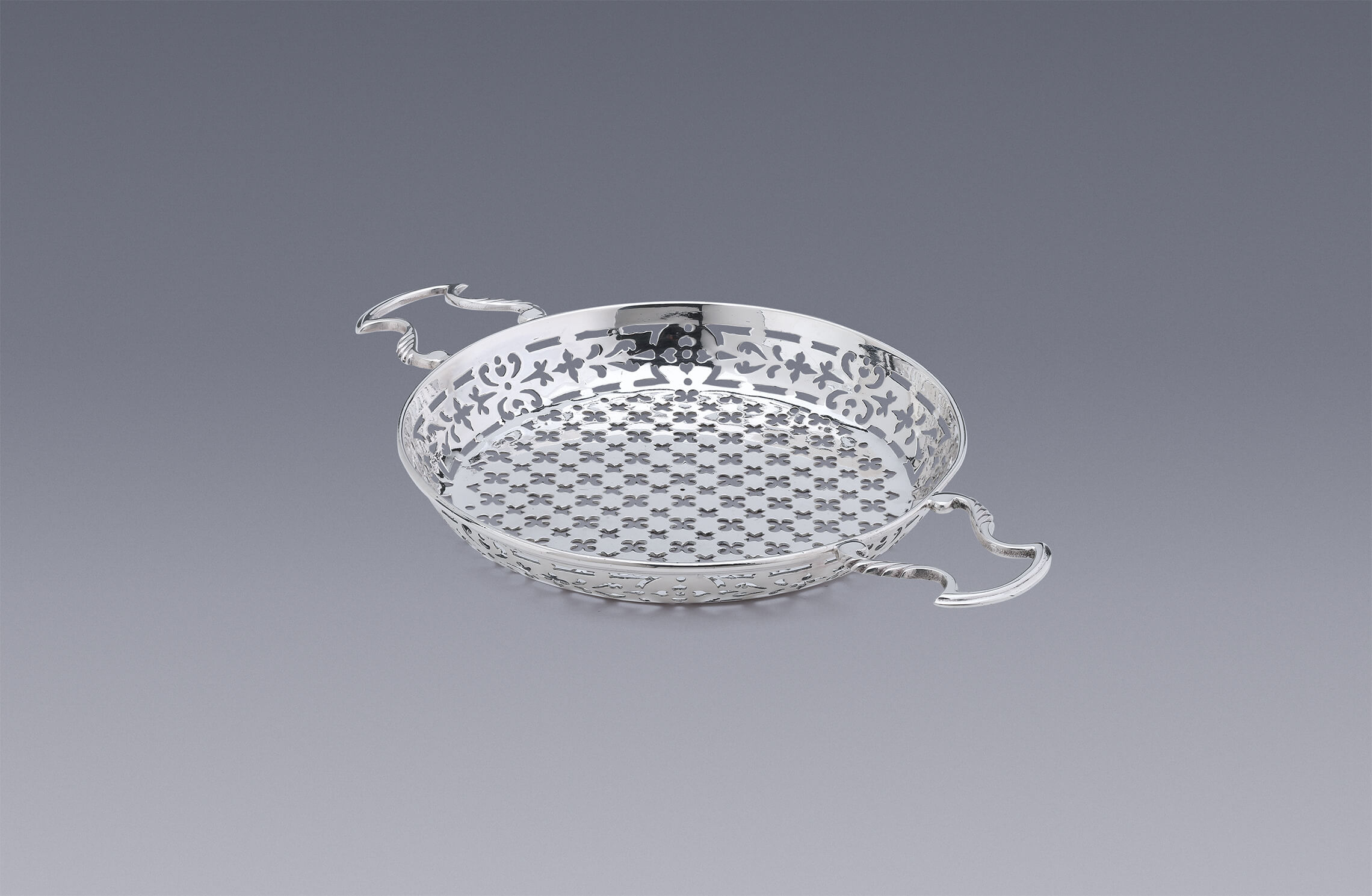 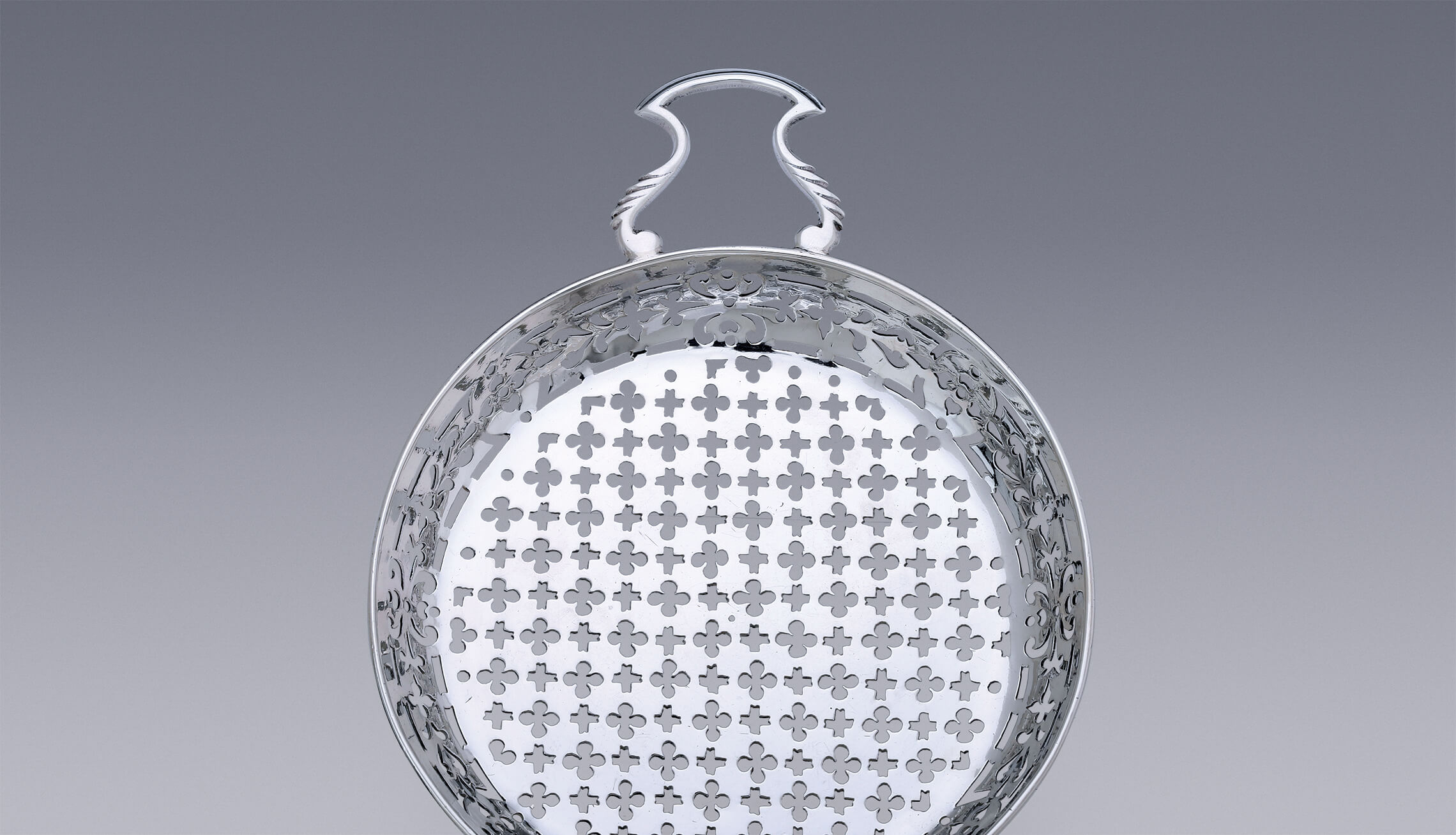 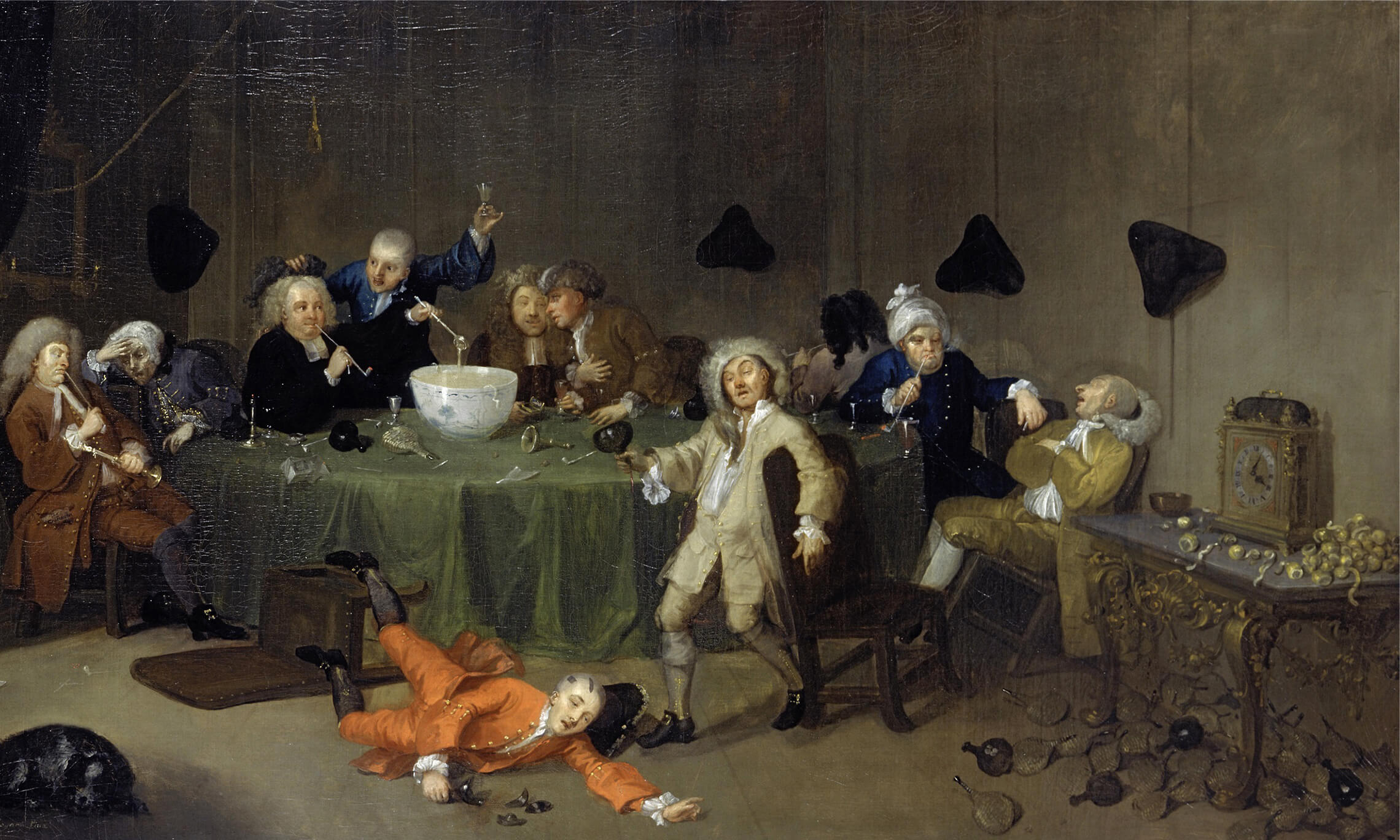 This extraordinarily rare silver strainer with two elegant handles was used for making punch. The bowl has a symmetrical openwork pattern of alternating quatrefoil and cross motifs. The upright sides have openwork band and foliage motifs.

A strainer made of precious metal was a very exclusive object. A gold ‘orrenges zeef’ appears on the inventory of the English royal house as early as 1533. The strainer was specifically designed for squeezing citrus fruit, which was very rare and expensive at that time. When the fruit was squeezed over a strainer, the pulp and the pips were trapped and did not end up in the drink. The first orange strainers were a simple shape and had small holes, often pierced in regular rows. Over the centuries, larger, more expensive versions were made, with decorative openwork patterns and two handles, like this one, so that the strainer could be hung over a bowl or jug.

A silver strainer was also a very expensive and highly unusual object in the Republic of the Seven United Provinces. Only a few silver orange strainers appear on Dutch inventories. Two orange zeeven are listed on the 1759 inventory of the House of Orange from the estate of Stadholder William IV and his English wife, Princess Anne. The British ambassador Philip Stanhope, 4th Earl of Chesterfield, added an Orange Strainer to his ambassadorial plate upon his appointment to The Hague in 1728. In 1752 the Leiden merchant Allard de La Court purchased, in The Hague, a ‘silvere citroenseeffie of 1 doorgeslaage backje om citroenen daarin uyt te drucken om pons te maken (a silver lemon strainer or 1 pierced bowl for squeezing lemons to make punch) together with a ponsleepeltje (punch ladle). This strainer by Bussard is the only surviving example.

As we see from Allard de La Court’s inventory, the strainer was acquired specifically for making ‘pons’. Pons, the Dutch corruption of punch, is an alcoholic fruit drink. It was the very first cocktail, a combination of strong liquor, usually rum or brandy, mixed with citrus fruit, spices and sugar. The earliest known written reference to punch occurs in a letter written in 1632 by Robert Addams, who was then stationed in India in the service of the British East India Company. He wrote to a colleague about their accommodation and company: ‘I hop you will keep good house together and drincke punch by no allowance.’ The first punch recipe appeared six years later, in 1638, when Johan Albert de Mandelslo, a German factory manager in Surat, India, wrote that his workmen drank ‘a kind of drink consisting of aqua vitae, rose-water, juice of citrons and sugar’. The recipes and ingredients varied, depending on the budgets of the maker and the drinker.

It was initially a drink for British sailors. They were entitled to ten pints of beer a day, but in the tropics the beer went off. At the beginning of the seventeenth century, using local ingredients from the East Indies and Indonesia, they created a new drink, punch. An added advantage was that the citrus in it provided some protection against scurvy, giving the seamen a better chance of surviving the long journey.

Over-provisioning of the ships meant that some of the ingredients came back to England with the sailors. Financiers regularly visited the vessels in which they had invested as they lay in the docks and encountered the new drink there. With its expensive imported ingredients such as lemons and nutmeg, punch also became a hit with the aristocracy. A single lemon cost a small fortune. At the end of the seventeenth century, a three-litre bowl of punch cost as much as half a week’s wages for a working man. The drink became very popular throughout Europe. In England it was drunk by men in taverns and coffee houses (see image on the left), while the ladies—who were not admitted to the men’s clubs—sat at home drinking tea and chocolate. Punch was also served in the houses of the upper classes as a social event in the afternoon.

The Hague silversmith Isacq Samuel Busard was born around 1706 and married AnnaAntoinette Trouillé on 22 June 1749. He died on 11 February 1784 at the age of seventy-eight. He lived successively on Fluwelen Burgwal, Kalvermarkt and Korte Poten. Busard became a master in 1731 and joined the Hague silversmiths’ guild the same year, becoming one of the finest silversmiths in the city. As a silversmith and shop owner—he sold pieces by fellow silversmiths as well as his own work— he was famed for the high quality and weight of his objects. He had an excellent eye for ornament and proportions, and the standard of his execution was unsurpassed.

Marked in the centre of the underside of the strainer with the assay mark of The Hague twice, the maker’s mark IB for Isacq Samuel Busard and the date letter L for 1733. 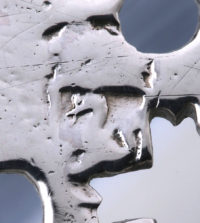 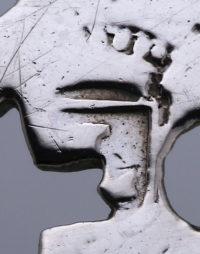 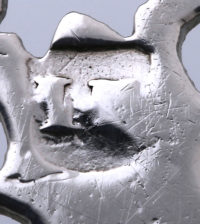