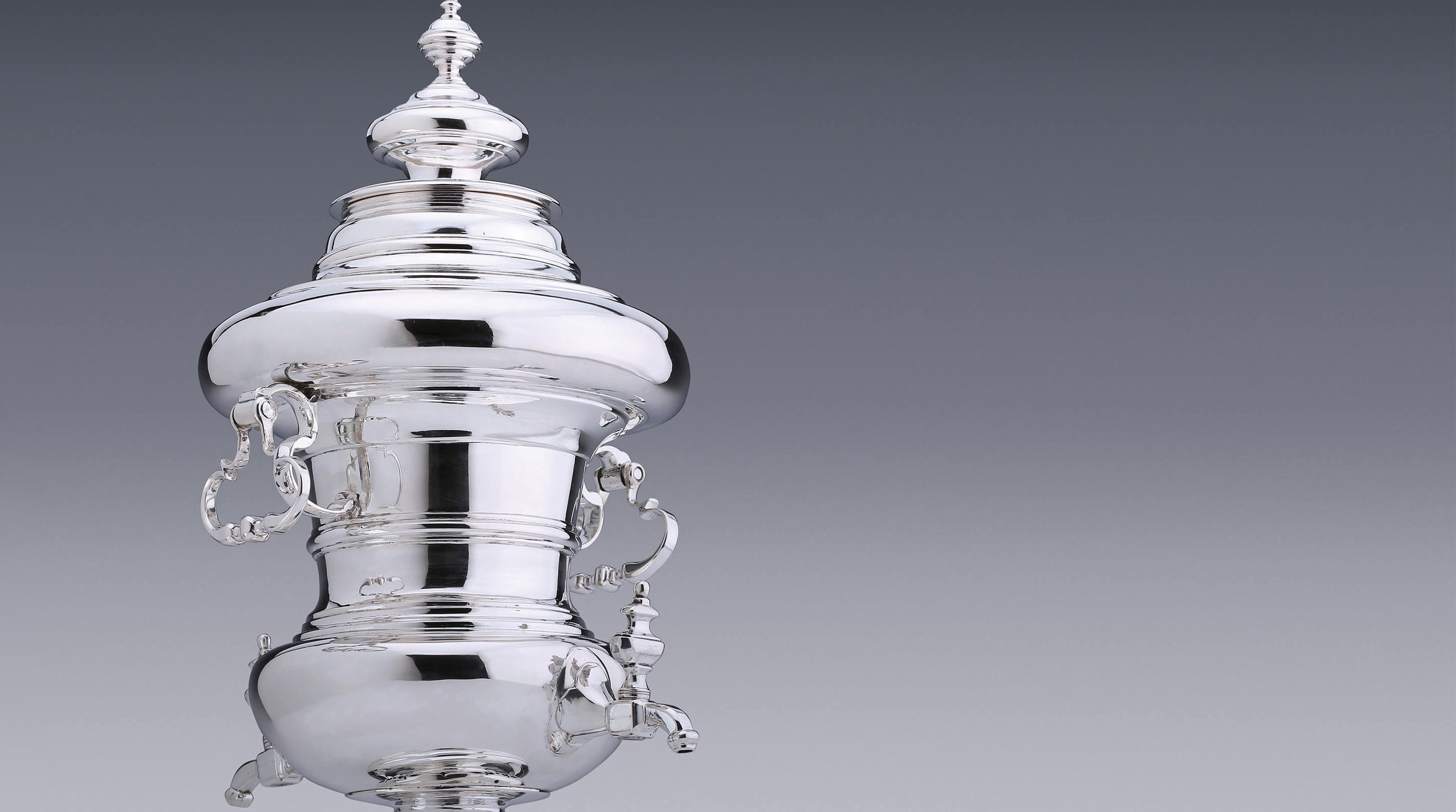 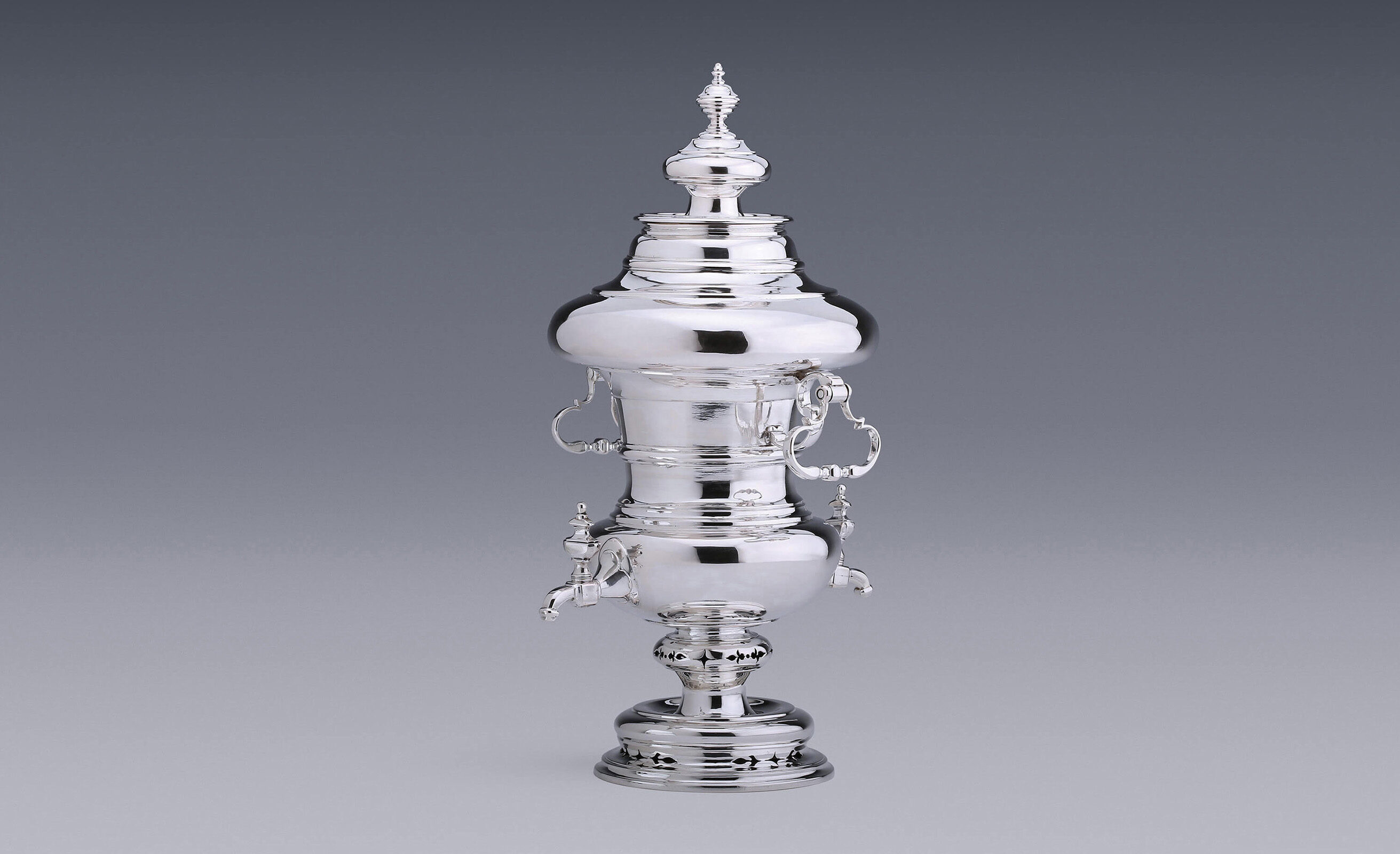 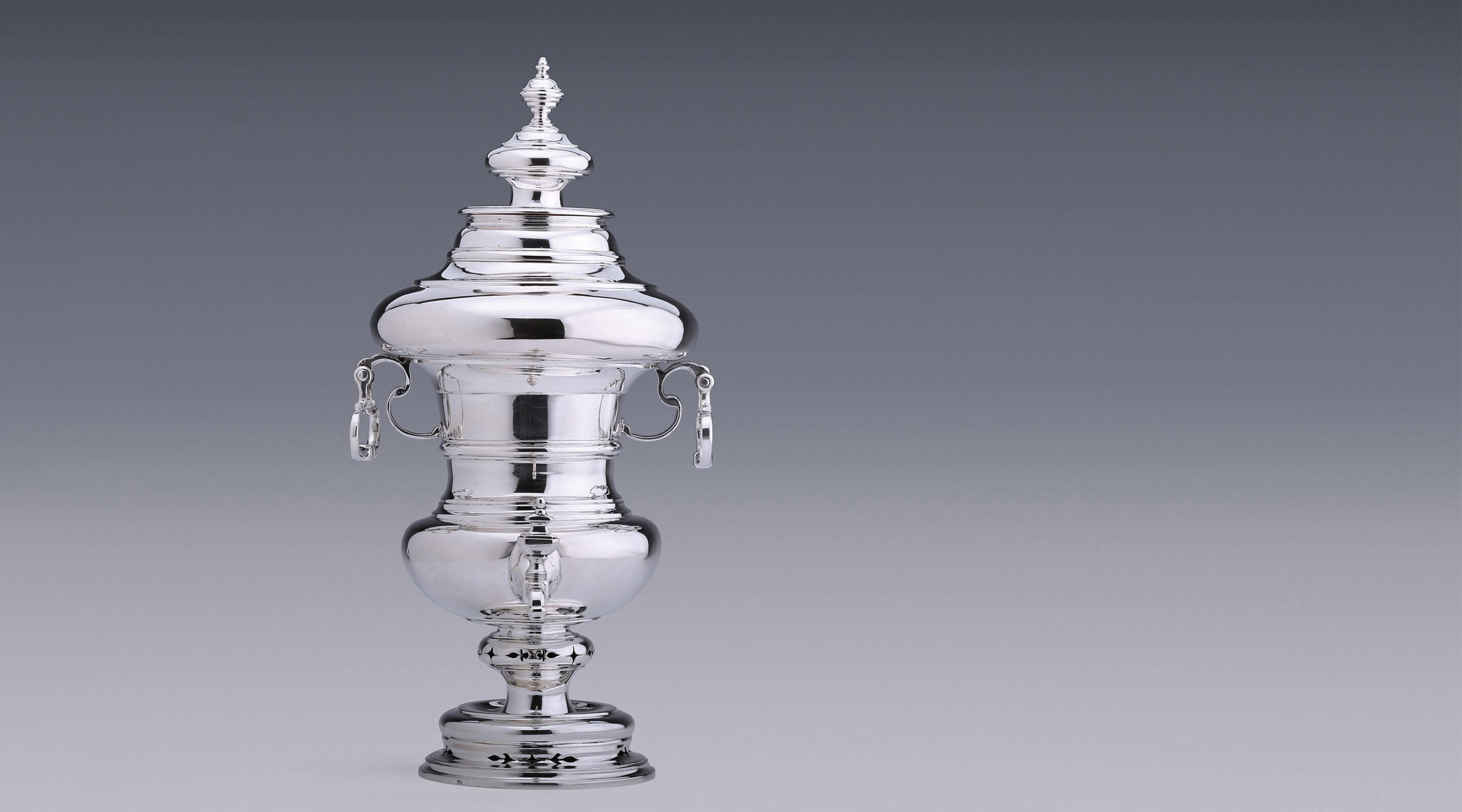 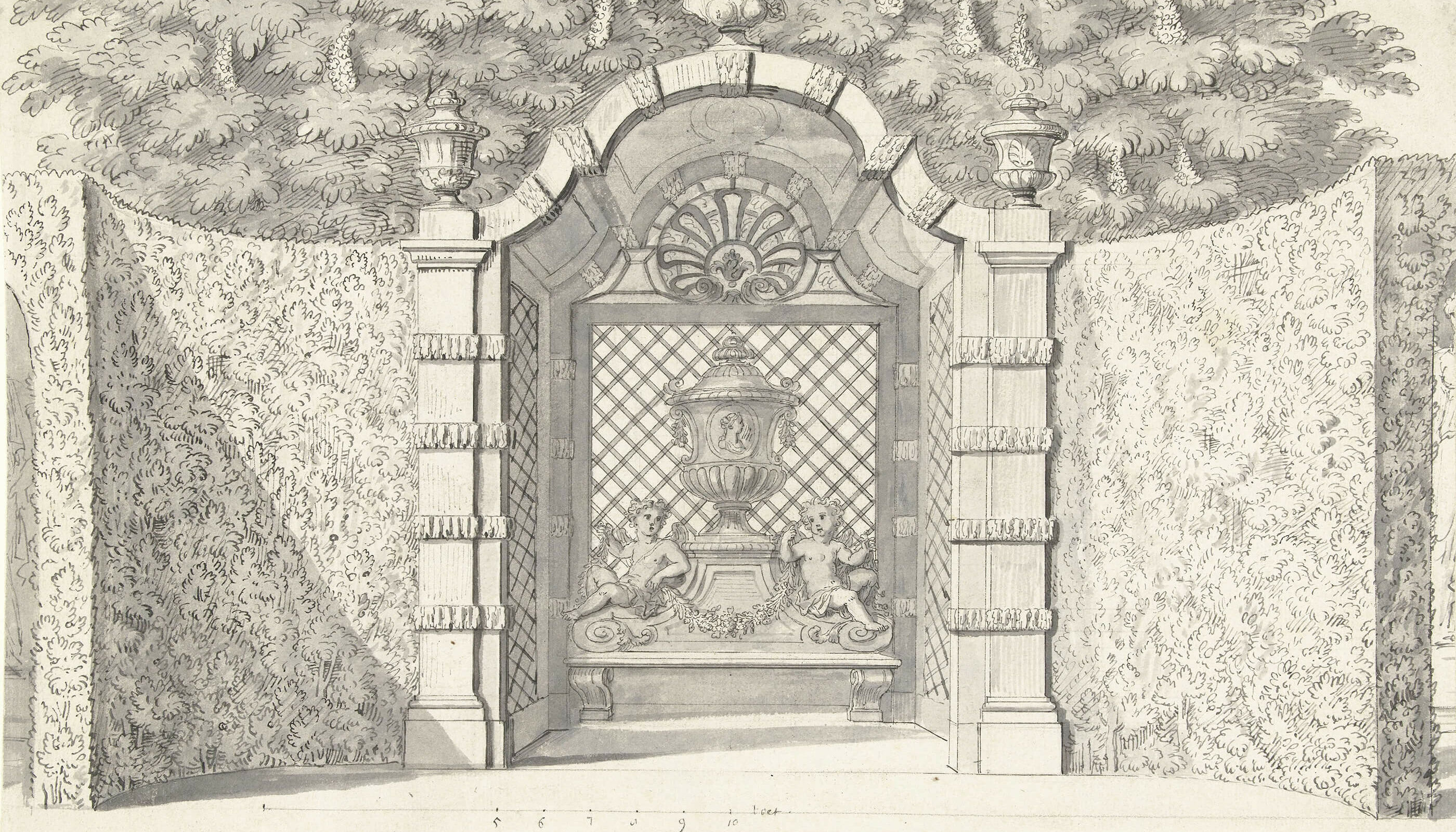 This very elegant coffee urn with two taps was made by Gerardus Klein in Groningen in 1722/23. Designed in the shape of a round garden vase, it has symmetrical openwork ornaments in the moulded foot and the node. These openings admit oxygen to a burner that can be placed under the urn to keep the contents warm. Two cast taps are placed directly opposite one another in the body of the urn.

The handles of these taps are also shaped like a garden vase, rectangular with chamfered corners. On either side of the urn under the neck there is a hinged handle consisting of C-scrolls attached to an S-shaped support mounted crosswise on the urn. The moulded, tapering cover has a knob in the shape of a vase.

The coffee urn was introduced into the Netherlands at the end of the seventeenth century. It was used to make the coffee as well as serve it. Roasted and finely ground coffee was put into the urn and hot water was poured over it. The mixture was then stirred and left to stand so that the coffee grounds could settle. Because the spouts are placed slightly above the bottom of the urn and the coffee is tapped rather than poured, the grounds do not get into the cup. The cover and the burner placed under the foot keep the coffee hot. The coffee urn was the most prestigious object on the coffee table, particularly when it was made of silver.

The most common eighteenth-century Dutch coffee urns are pear shaped, with a round belly and a slim neck; they stand on three tall feet and have one spout. They were often made in pewter. A more luxurious and rare variant is the same model, often larger, with three spouts.
Vase-shaped coffee urns like this one are in a category of their own and are extremely rare in Dutch silver. The shape is taken directly from French designs for wine coolers and garden vases like those published in print form in the Netherlands by the French architect and designer Daniel Marot (1661-1752). They are generally large and usually have two or three taps. The urn could be placed in the centre of the table so that the diners could fill their cups from a spout wherever they were sitting. This means that the urn did not have to be moved, with the risk of disturbing the grounds.

The surviving examples suggest that this classical vase form was first made in The Hague. The earliest known Dutch silver coffee urn this shape was made by Jacques Chevalier in 1709. It has the typical smooth, curved lines of which the Hague silversmiths appear to have been so fond. This model of coffee urn derives its beauty from the build-up of mouldings, which reflect in the shining metal. There are only a few known, unadorned vase-shaped coffee urns from The Hague.

These characteristic smooth, plain, curved shapes were only ever emulated in a few other Dutch towns. Two years after Chevalier made his coffee urn in The Hague, we see this model in Groningen, where Thomas Muntinck II made an elaborately decorated version in 1711-12. A second vase-shaped urn was made in Groningen by Jan Dronrijp in 1714-15.
The sleek, plain execution of the 1722-23 example shown here is unique for Groningen. Gerardus Klein appears to have been influenced by the fashion at court in The Hague. A few years later the Hague fashion was also adopted in Friesland. Frequent contacts between the Frisian court and consequently the Frisian aristocracy and The Hague meant that the Hague fashion was adopted in Leeuwarden. Andele Andeles, a silversmith in Leeuwarden, also made a completely plain vase-shaped coffee urn in 1732. Like this urn by Gerardus Klein, Andeles’s urn bears a strong resemblance to a coffee urn by the Hague silversmith Daniel de Villette dating from 1715 and to one made by Esaias Engouw in 1720.

Coffee became a popular beverage in the sixteenth and seventeenth centuries, first in Arab countries where coffee came from and later in Europe. The first consignment of coffee beans arrived in Amsterdam in 1661 or 1662 and there was a regular trade by the end of the seventeenth century. Initially the beans came from the port of Mokha in Yemen, where coffee traders made fortunes from the growing demand from Europe. Mokha was the most important trading centre for coffee from the fifteenth century to the seventeenth. It proved so lucrative that at the beginning of the eighteenth century the Dutch started to establish their own coffee plantations on Java. The first cargo of beans from this source was unloaded in Amsterdam in 1711. The Dutch went on to cultivate coffee in Brazil, Suriname and Africa.

In the seventeenth-century Dutch Republic, the exotic and still exclusive drink was only drunk by the aristocracy and a handful of wealthy citizens. Colonial wares were hugely popular in these circles. The finest silver services and accessories were acquired to drink and show off these luxury products. As the price of coffee began to fall, so consumption grew. Everyone, not just the elite, could afford it. Coffee houses opened in large numbers and around the middle of the eighteenth century coffee became the national beverage—which it has remained ever since.

Marked on the underside of the body with the Groningen assay office mark, fifth alphabet letter V for 1721/22 and the maker’s mark GK for Gerardus Klein. 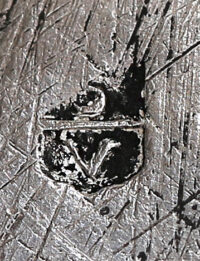 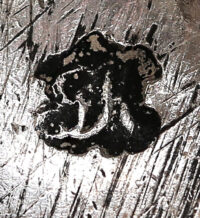