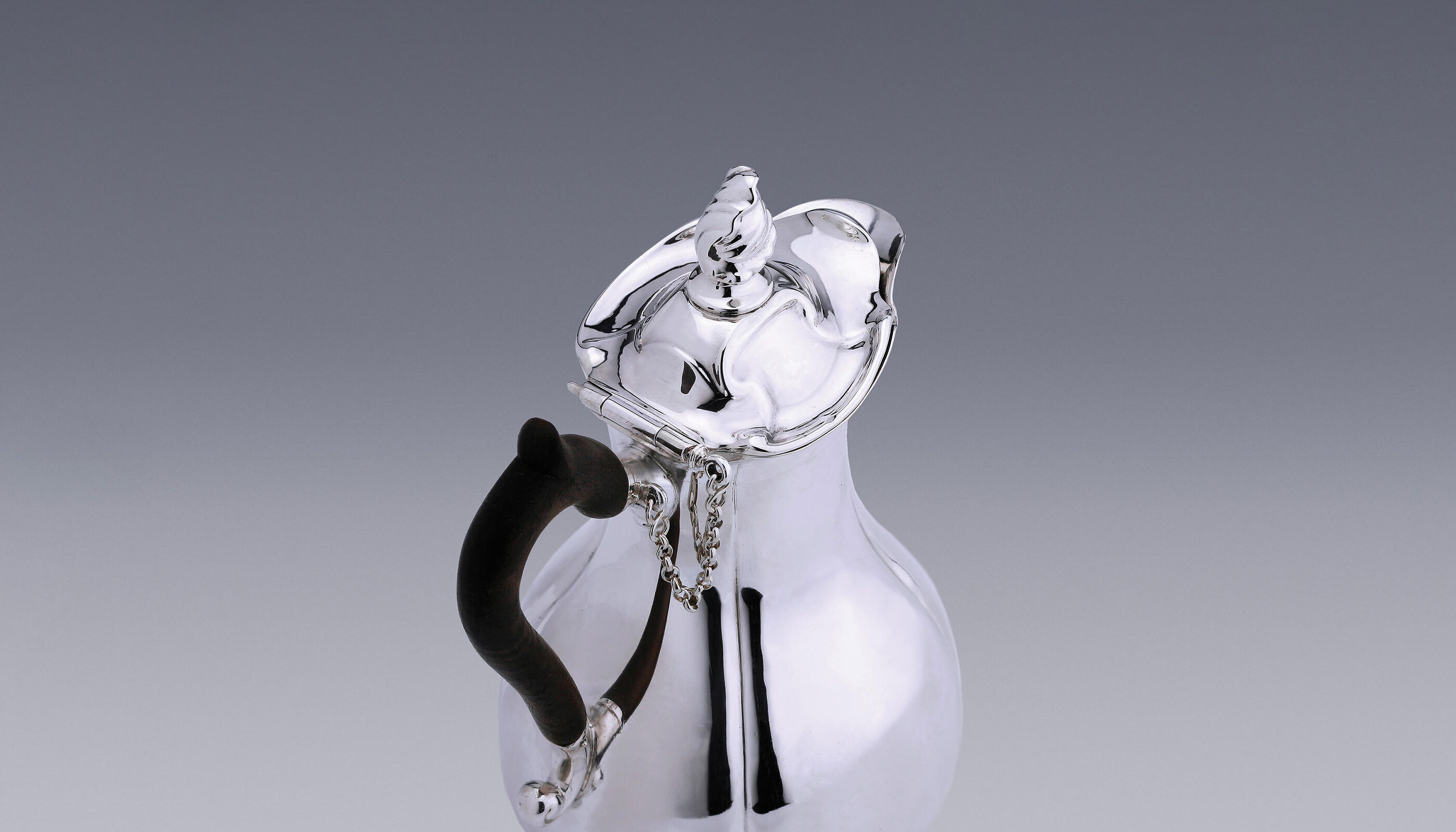 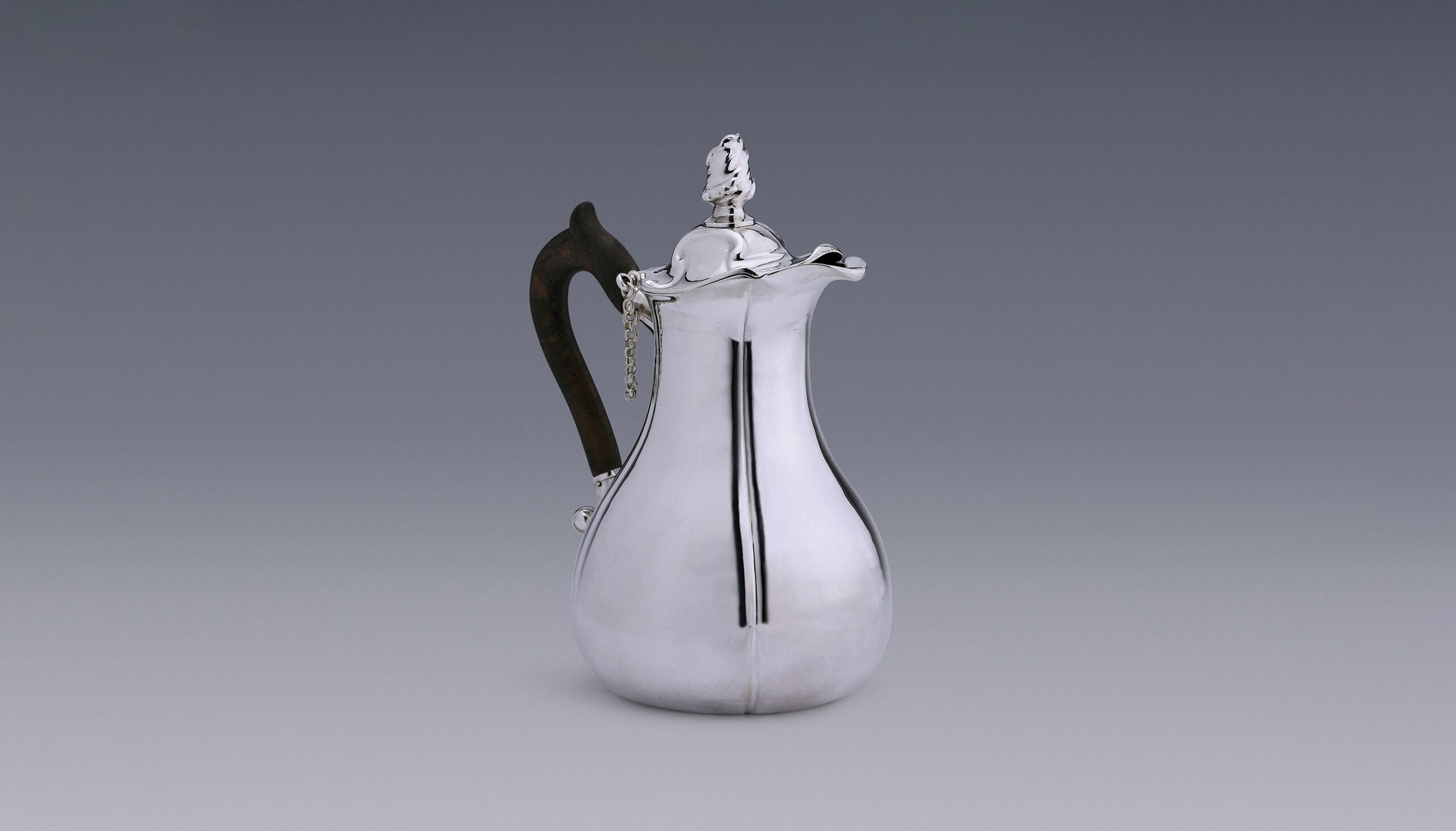 Nowadays, millions of people enjoy chocolate every day, but this was not always so. The product was completely unknown in Europe until the sixteenth century, and chocolate did not become something everyone could afford until the twentieth. In the eighteenth century, the period when this pot was made, chocolate was served only at court and in the houses of the wealthiest citizens. Dutch silver chocolate pots of this period are consequently very rare.

This elegant chocolate pot is a very subtle interpretation of Louis XV style. The pear-shaped pot has tapered ribs. The pot is plain, apart from a bold rocaille ornament on the knob that tops the domed lid. This knob can be unscrewed, confirming that the pot was designed for serving chocolate. A wooden stirrer could be inserted through the round hole in the lid to stir the cocoa that had settled to the bottom through the milk before the drink was poured out.

The Discovery of Cocoa by Europeans

In 1502, the explorer Christopher Columbus became the first European to see a cocoa bean, but it was the Spanish conquistador Hernán Cortés who during his expedition through the Aztec Empire (1519-21) saw with his own eyes how cocoa beans were used. The Aztec emperor Montezuma drank large quantities of chocolate from pure gold cups. The Spanish saw that the drink was treated with great reverence and concluded from this that it must be very valuable. Cortés conquered the country and immediately began to establish cocoa plantations. He was convinced that cocoa would bring him the same riches as the gold for which he had hoped.In 1528, at the end of his expedition, Cortés took cocoa beans back to Europe. They were given to Spanish monks, who learnt how to prepare the chocolate drink from them. At first, people found the drink much too bitter, but when the monks added sugar and honey it rapidly gained in popularity. It was not long before the Spanish nobility were drinking chocolate, but because it had to come all the way from the Americas, chocolate was far too expensive for ordinary people.

The Spanish, of course, tried to keep the secret of this new gold to themselves. When the drink caught on with the Spanish nobility, production of the coveted product rapidly spread through the regions that the Spanish had conquered in Central and South America, and large cocoa plantations appeared everywhere.
When Louis XIII married the Spanish princess Anne of Austria in 1615, the French aristocracy were also introduced to cocoa as a drink. She moved to France and introduced chocolate at the royal court. Anne even brought her own maid to France with her. This was Molina, a pretty girl who prepared the queen’s chocolate. The first real chocolatier, David Chaillou, set up shop in France in 1659. He made and sold biscuits and cakes with chocolate for those who could afford them, but it was still too early for chocolates of the kind we know today.

Although the Southern Low Countries were annexed by the Spanish Empire after the death of Charles the Bold in 1477, the first record of cocoa does not appear until 1635 in Baudelo Abbey in Ghent.
In 1641 the German scientist Johann Georg Volckammer came across chocolate on a trip to Naples. He was so overwhelmed by the taste that he took some back to Germany with him. It was a while before he was able to persuade the Germans, but eventually many people took to the drink. The Germans actually introduced the custom of drinking a cup of hot chocolate before bed.

The English regarded chocolate as extravagant when they first tasted it in 1657. As in the rest of Europe, chocolate was a privilege at first and drunk only at court and by the aristocracy, but it soon became a popular beverage among the upper classes.

The Netherlands became part of the Spanish Empire in the fourteenth century, so the bitter cocoa drink was known there from the beginning of the seventeenth. The Dutch West India Company even imported cocoa through the port of Amsterdam, set up small production units to process cocoa and sold it to foreign traders. Cocoa beans were also brought to Zeeland from Trinidad and from the Company’s own plantations in Suriname and ground into ‘Zeeuwse chocolate’ in mills driven by wind, manpower or animals. The product consisted of small, dark and very bitter cocoa tablets and blocks, known as Zeeuwse koekjes, which were also very fatty because they still contained all the cocoa butter. Dissolving them in hot water produced a heavy, fatty cocoa drink known as socculate, which tasted very different from the cocoa and chocolate we drink today. Socculate was flavoured with aniseed, nutmeg, cinnamon, amber and vanilla or sugar. It was not until the end of the seventeenth century that someone came up with the idea of adding milk rather than water, which gave the drink a fuller taste.

The process of turning cocoa into chocolate was difficult, and despite the expansion of production the price of chocolate remained very high, putting it out of the reach of most people. The cocoa trade started to advertise in Europe. Around 1680 there was a remarkable rise in the Netherlands and France in the publication of books extolling the benefits of coffee, tea and cocoa as restoratives and foodstuffs. In about 1685, probably commissioned by Dutch merchants, the Dutch physician Cornelis Decker, alias Bontekoe, wrote a book about coffee, tea and chocolate. Chocolate as a drink never gained the popularity in the Netherlands it achieved elsewhere in Europe. The silver chocolate pots made in the Netherlands date from the early eighteenth century. The number of known examples is very small.

In 1709, at the age of twenty-seven, this Frisian-born silversmith married in Amsterdam, where he was enrolled in the guild a year later. He had learned the trade from his father, Nicolaas Alger, who had worked in Leeuwarden. Like his father, Alger chose a symbol from the family coat of arms as his maker’s mark. While his father used the swan, Alger chose the wild man (a man with a club) as the signature for his pieces. Several of them are now in museum collections. The chocolate pot is marked on the underside with the Amsterdam assay mark, the Dutch lion, the date letter for 1756 and the wild man maker’s mark for Alger Mensma. 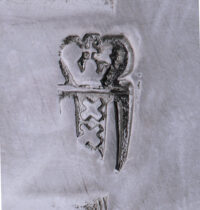 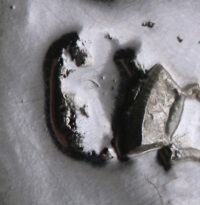