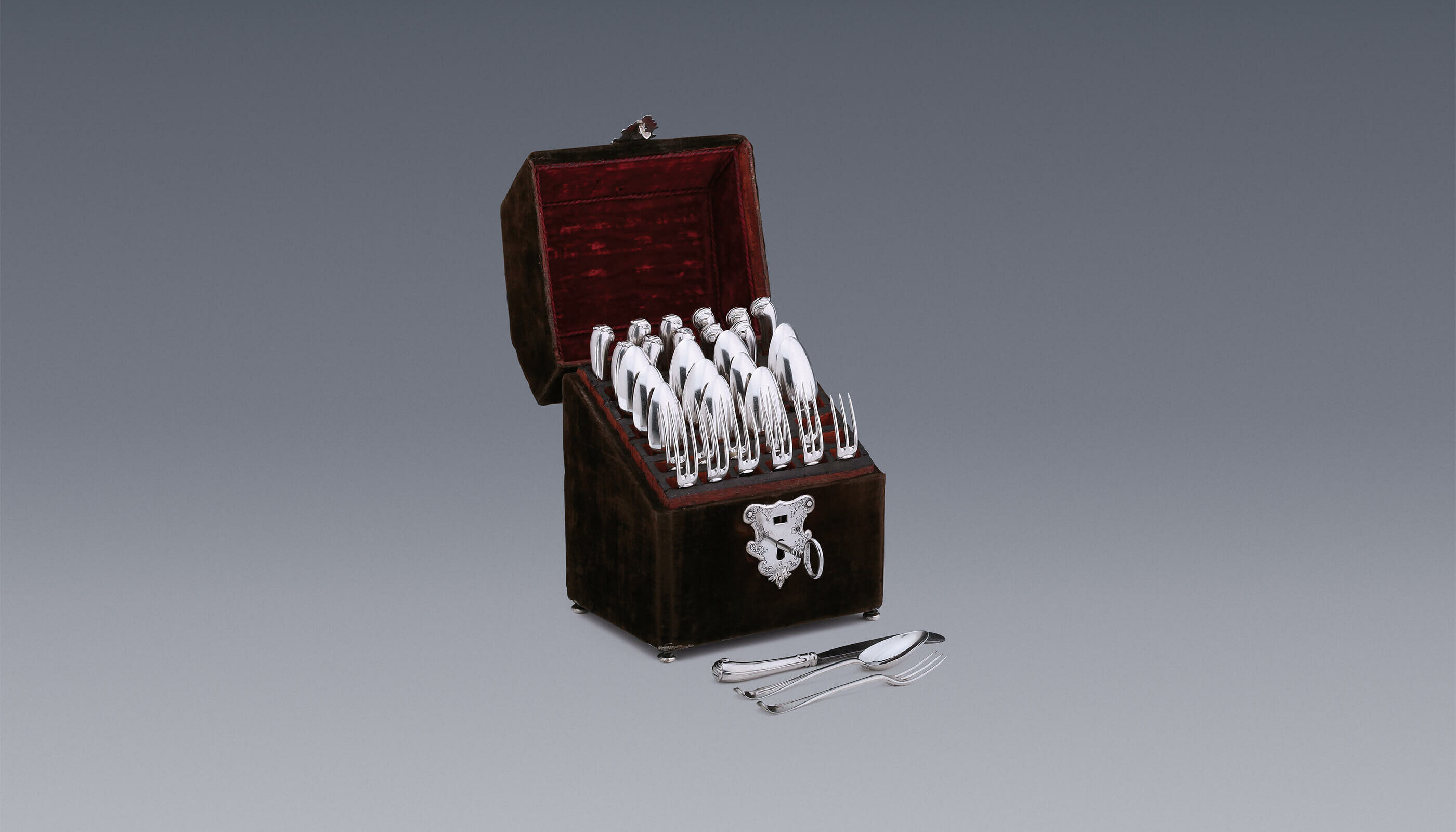 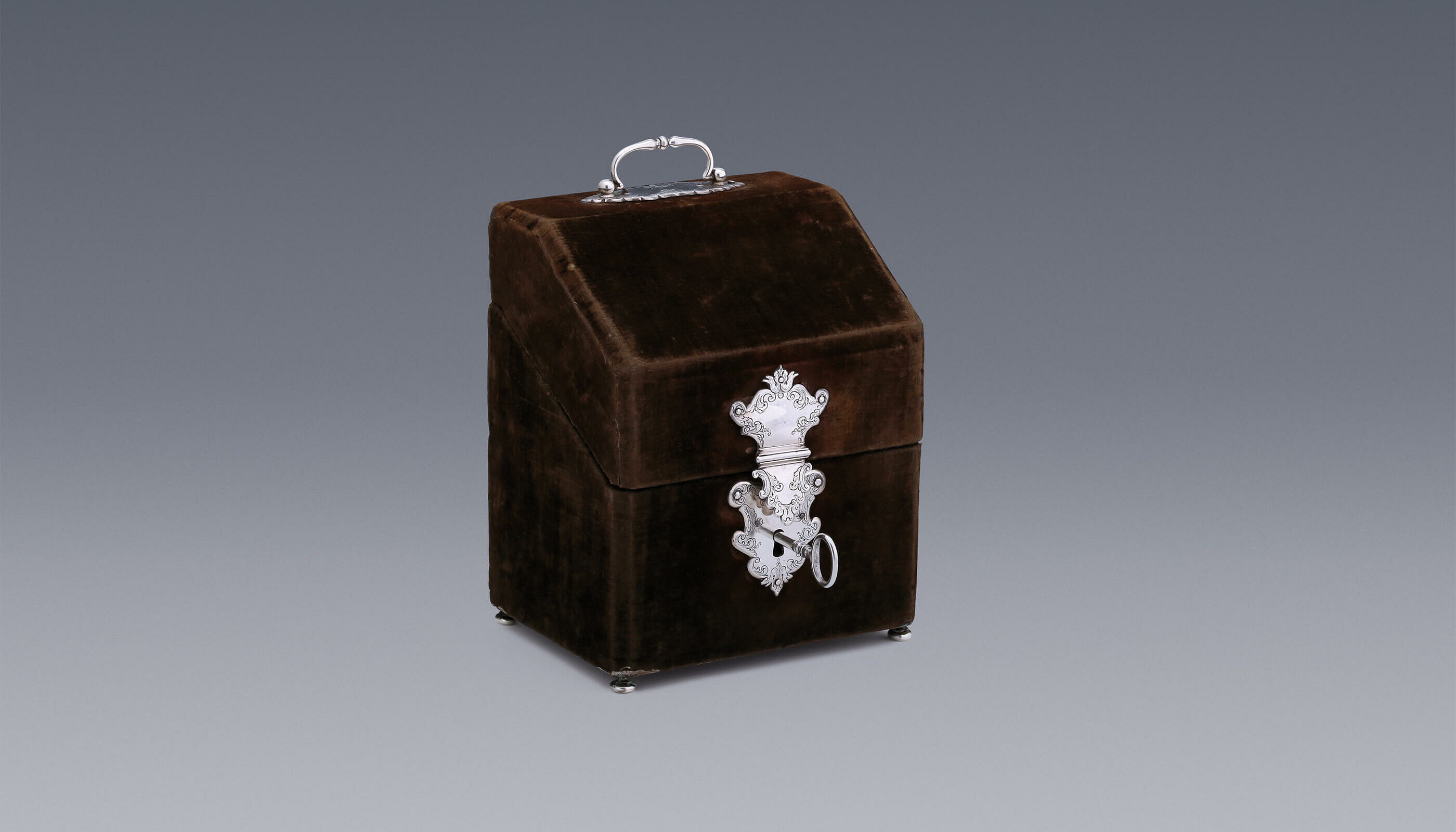 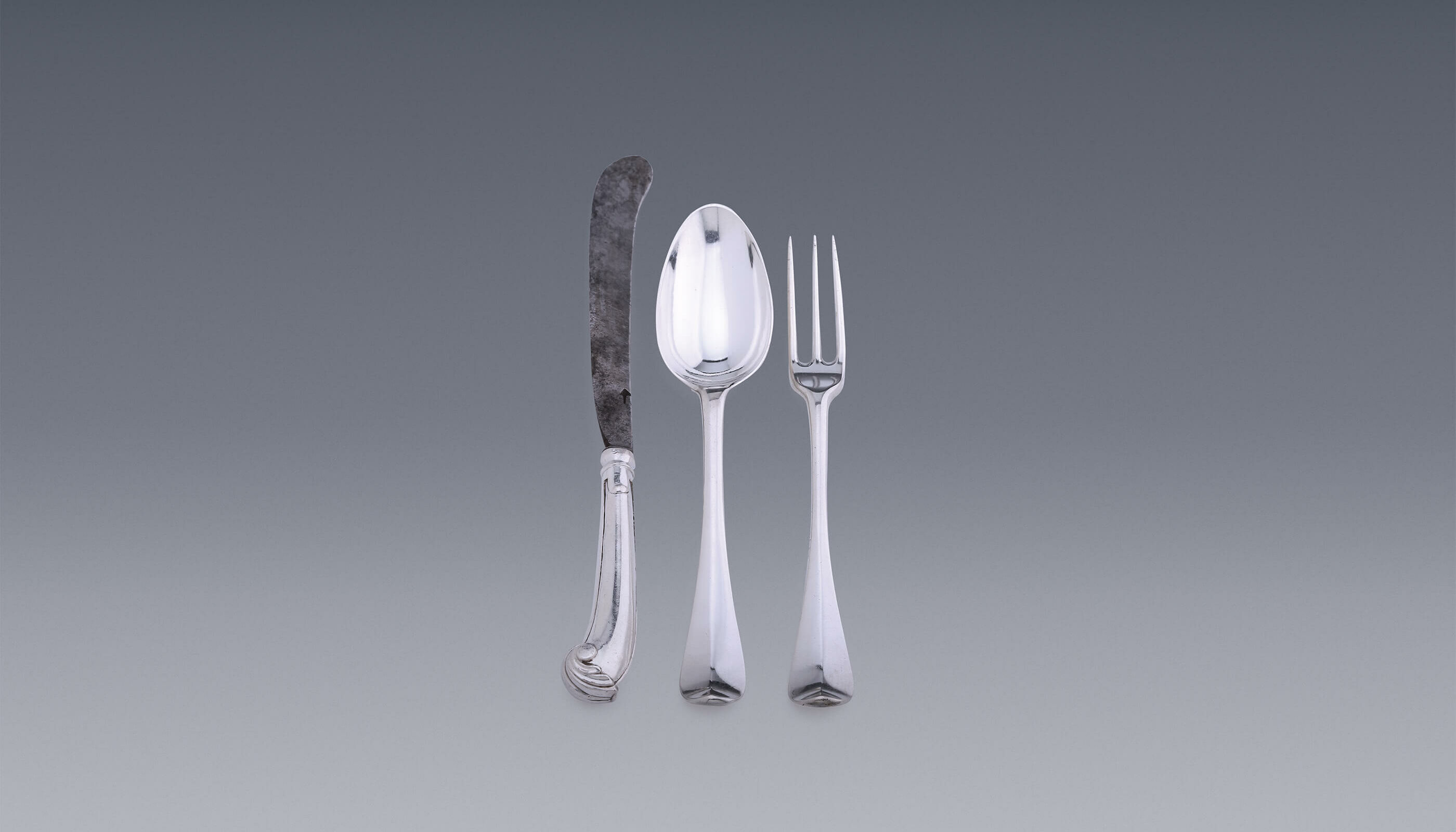 Twelve Confit Sets in its Box

This set of twelve confits is the only known complete set of this small size made in Dutch silver in the eighteenth century. The charming cutlery box is just 17.5 centimetres tall. It is filled with twelve very small knives, forks and spoons. The canteen itself is covered with brown velvet and lined with red velvet. It stands on four silver ball feet and has engraved silver fittings, with a silver key. The wooden interior is black, with red paint.

The three-tined forks are 11.2 cm long. The spoons have the same handle and are 11.7 cm lang. The knives have a pistol-grip handle with a stylized foliar motif that curls at the end and an iron blade. They are 14 cm long. This is shorter than the usual dessert sets, which began to appear in the second half of the eighteenth century and are usually around 18 cm long. It is also smaller than children’s cutlery, where the spoons and forks are usually about 14 cm long. It is an extremely rare set.

Cutlery of this size was used for eating fresh and crystallized fruit. Presenting these confits became an important part of receptions as early as the seventeenth century—and not just in royal courts but among the wealthy elite, too. Candying or confiting food is a method of preserving it. It can be done by laying the food in sugar, but it is also a cooking technique in which meat, game or poultry are cooked very slowly for a long time in a large quantity of animal fat.
Here we are concerned with the sweet variant in which sugar or honey are used. Sugar is best for making dry preserves and it became available in the sixteenth and seventeenth centuries when cane sugar was grown on plantations in Brazil and the Caribbean. These sugar-coated preserves or candied fruits, also called comfits, were served along with other confectionery such as nougat, biscuits and marzipan as the final course at a banquet. Although the technique is generally thought to have originated in Italy, it was the French influence that brought it into fashion in the Low Countries. There are numerous recipes from which we can see that a great variety of fruits were candied wet or dry. Interestingly, as well as sweet fruit and nuts, flowers, such as roses and marigolds, egg yolks, and vegetables like salad leaves, fennel and cucumber, and even spices were preserved with sugar.

Until the mid-seventeenth century, it was the custom for every diner to bring their own eating irons to the table. Travelling without a spoon was the height of bad manners. Most travellers had a wooden spoon in in their pocket; the wealthy carried a silver or even gold one. Although a carving knife and fork were part of the normal household effects in a well-to-do home, very few houses had table knives. People ate with their hands, often using bread to assist them and sometimes the tip of the knife. The spoon and knife on the table are thus much older than the fork. You had to have a spoon for liquids like soups, and you needed a knife to cut food into bite-size pieces. Most households in the Netherlands consequently had little in the way of flatware for the table. People ate, as they did elsewhere in Europe, with a knife and spoon. The custom of eating with the hands began to change in the second half of the seventeenth century.

This change in eating habits was a function of prosperity and of fashion, which was heavily influenced in the Dutch Republic by French court circles. As the seventeenth century progressed, the French set the tone in everything—from architecture, landscape gardening and decorative art to cooking and table etiquette. France dictated what was eaten in the houses of the elite after the first cookery books were published. The French chef François Pierre de la Varenne unleashed a veritable revolution with his cookery book Le cuisinier François. Other cooks followed his lead and it was not long before French-language cookery books were being printed in the Republic. And so that people could show off their wealth, more are more objects were made to grace the table.

It was Louis XIV (1638-1715) who transformed the custom of bringing one’s own cutlery to the table. He was one of the first to present his guests with a fully laid table, so that they no longer needed to bring their own implements. With a fully laid table, he both impressed his guests and was able to avoid the embarrassment of someone bringing finer cutlery than his. In the course of the first half of the eighteenth century, tables in the Republic were also fully laid. As the dining culture developed, so increasing numbers of objects were made to decorate the table and there was a growing demand for more types of cutlery. This canteen is an exceptional and very rare complete example.

We know from eighteenth-century inventories that cutlery was often kept in boxes or chests. The oak used to make these canteens was covered with various materials, among them shagreen, velvet, lacquerware and marquetry. Canteens were both decorative and practical. When the cutlery was put away, you could see at a glance if anything was missing, and it was also easier to take the sets with you when you went to your country house.

Jacob Schenk was born around 1722. His father was Isaac Schenk, a bricklayer by trade. In 1741 Schenk was entered in the register of burghers as a bargee. He started working as a silversmith in 1744, although it was 1768 before he appeared on a roll of active masters. The guild members on this roll are arranged in order of admission. Schenk comes on the list between the silversmiths Woortman and Precht, both of whom were admitted to the guild in 1744. Schenk is a good example of a worker in precious metals for whom silversmithing was a sideline. Schenk married twice—Maria van Leeuwen in 1745 and Christina Bormann in 1763. He died in 1786. In 1772 Jacob’s son, Isaak, was also enrolled as a silversmith in the burghers’ register. 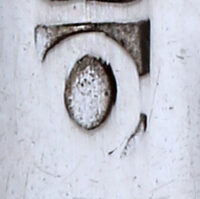