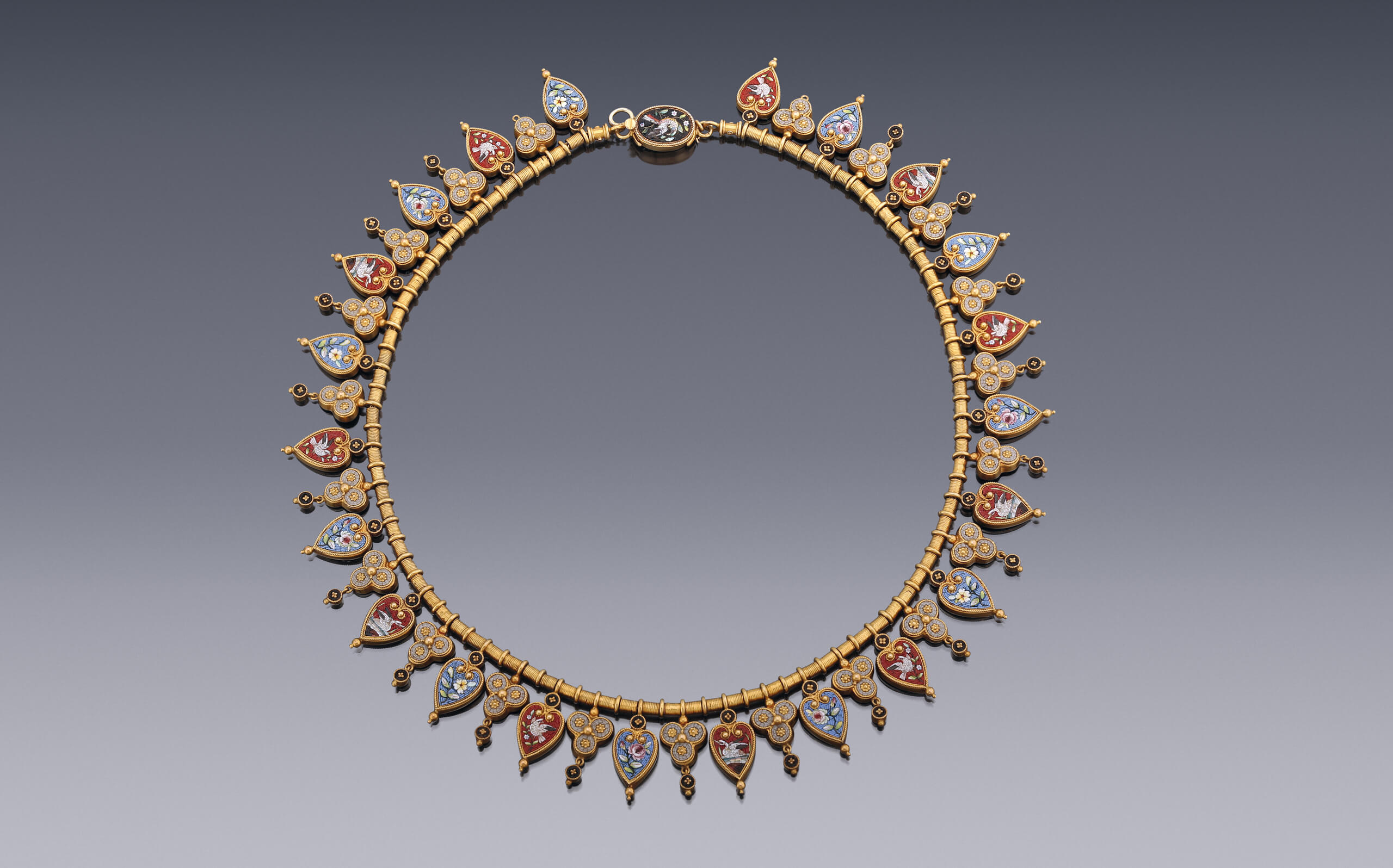 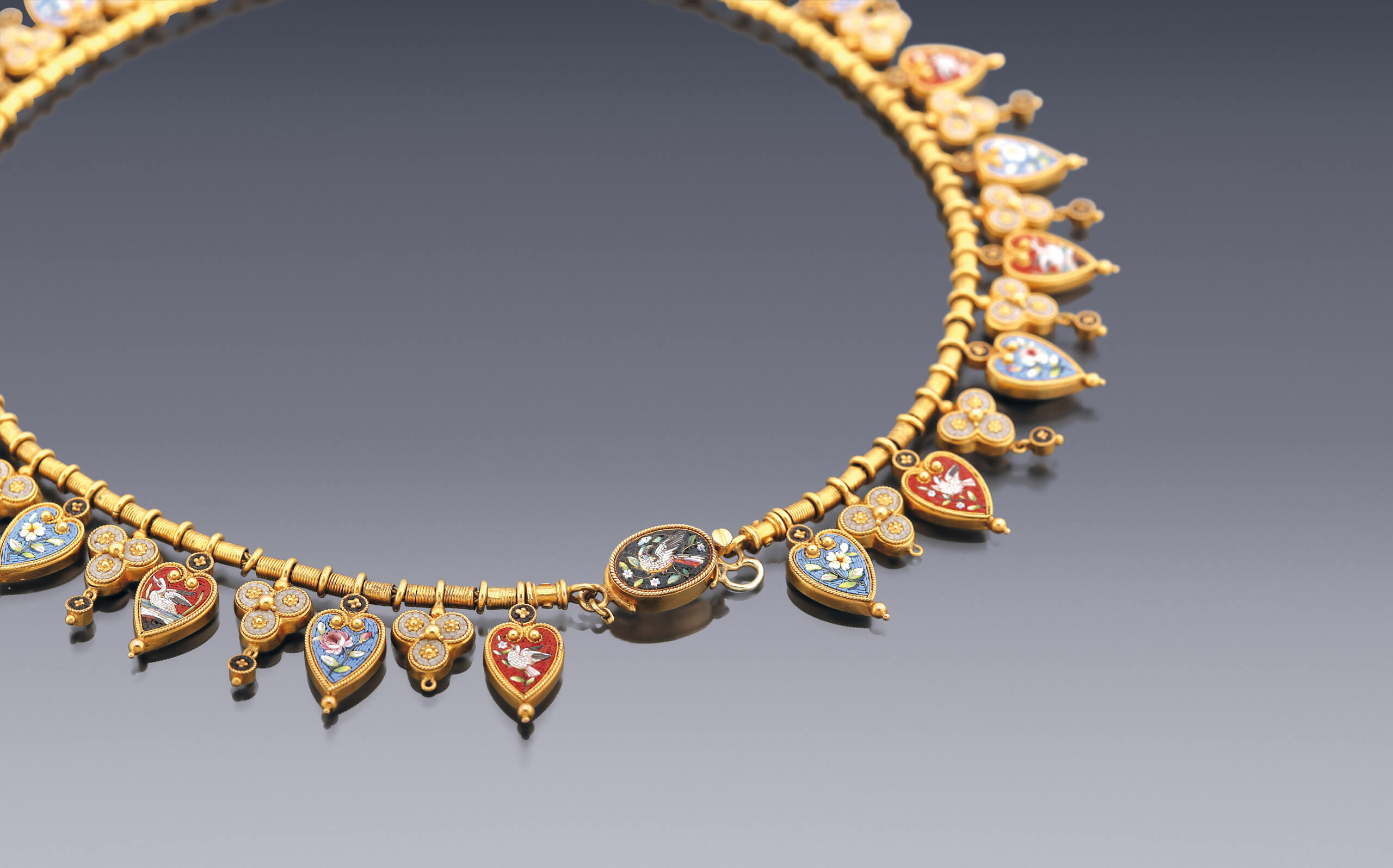 This refined eighteen-carat gold necklace with micro mosaics in archaeological style is made up of heart- and trefoil-shaped drops on a gold cord, separated by ribbed gold tubular beads. In the heart-shaped drops with the red background we see glass micro mosaics with swans and doves, facing left and right alternately. The heart-shaped drops with the blue background are decorated with flowers. Between them are trefoil-shaped drops filled with grey-green tesserae. Each drop has another small, round ornament with black micro mosaic—attached at the top or hanging below it. This dark accent is also used in the clasp, which is decorated with a multi-coloured, exotic bird on a flowering branch against a black background.

Micro mosaics are created from ‘tesserae’; minuscule fragments, usually of glass, that are arranged so as to form small designs. Tesserae measure no more than 1 mm, which is incredibly small. The most sophisticated micro mosaics may consist of 200 to as many as 850 tesserae per square centimetre. It is not hard to imagine that the process for making them demands immense precision and is extremely time-consuming.

There are various methods of making micro mosaics. The most common technique involves melting coloured glass, called smalto, pulling it into thin rods or threads and then, after it cools, cutting it into minute pieces which are then arranged on a copper or gold tray to create images, usually historical Roman scenes, or plants and animals. The metal support is filled with mastic in which the tesserae are painstakingly placed. Once the mastic has hardened, the gaps between the tesserae are filled with coloured wax and the whole picture is polished to give it a smooth and even surface.

Mosaics originated in the Far East. The earliest examples were found in Macedonia and date from the third century BCE. They were made from simple materials like pebbles and shells. They became incredibly popular in Ancient Rome where they were constructed from small pieces of marble, terracotta and glass and were often used to decorate the floors of villas and the basins of fountains. But the first heyday of mosaics came during the Byzantine Empire (330- 1453) when they were used to decorate the early Christian churches. They could be incredibly sumptuous and grand, especially with the abundant use of gold leaf.

The second great period for mosaic art happened in Rome in the eighteenth and nineteenth centuries. These mosaics differed from their forerunners in the first period because they were meticulously created with much smaller tesserae in a technique now known as ‘micro mosaic’. The best workshops competed with one another to create ever more finely worked products. The method was used on small and large objects, from jewellery and snuff boxes to pieces as large as table tops.

The growing demand for small mosaics came about with the rise in tourism in Italy. Since the second half of the eighteenth century, it had been customary for male members of the aristocracy and the upper classes to undertake a Grand Tour to Italy as a rite of passage when they came of age at around twenty-one. The trip could last anywhere from a few months to several years. In the late eighteenth and the nineteenth century, travel became safer and cheaper and more people could afford to go.

The micro mosaics were hugely popular

Now, members of the upper middle class also went on the Tour. And everyone who did brought souvenirs back with them, as ‘proof’ of their trip. Shrewd Italian craftsmen quickly turned their glass-making skills to making stunning miniature micro mosaic pictures for their wealthy visitors. The micro mosaics were hugely popular. Many micro mosaics, rather than being sold in Italy, were exported to jewellers in London and Paris to be set into jewellery or larger pieces such as snuff boxes. This necklace dates from this period.

In 1866 there were 172 mosaicists working in eighteen workshops in Rome. Mosaicists were considered to be artisans and craftsmen, not artists in their own right. As a result, many of the pieces are unsigned. Nevertheless, we know a number of names of some because of their extraordinary achievements. Among them was Giacomo Rafaelli (1753-1836) of Milan, who was one of the first to use micro mosaics in making jewellery. Another craftsman was Clemente Ciuli, a contemporary of Rafaelli’s who made a number of micro mosaics as an official gift from the Pope for Napoleon’s coronation. Micro mosaics were so popular, in fact, that Tsar Nicholas I asked Michelangelo Barberi (1787-1867) to come to Russia to set up an Imperial Mosaic Studio in St Petersburg. Barberi was given important commissions by European nobility and was one of the most famous and financially successful mosaicists.

In 1814, Fortunato Pio Castellans (1794-1865) founded the renowned jewellery firm of Castellani in a period of political unrest. The nineteenth century was the century in which the idea of a nation state took hold, and the creation of historical jewellery was associated with political ideals. Fortunato Castellani, like many others, dreamt of a glorious, united Italy. People looked to the past to create a visual image of the progress and development of civilization, spurred by recent archaeological finds, and show off the splendour of Italian culture and Italian craftsmanship.

It was the most famous house making jewellery in ‘archaeological’ style

The micro mosaics produced by this house were not the usual romantic scenes but were inspired by the mosaics in early Christian and Byzantine churches or contained Greek and Latin inscriptions. It was the most famous house making jewellery in ‘archaeological’ style and had a huge influence on its production. Later his sons Alessandro and Augusto took the firm over. It closed its doors in 1927.

The term ‘micro mosaic’ was coined in the twentieth century by the British collector, Sir Arthur Gilbert (1913- 2001). Previously referred to as ‘Roman mosaics’, this term was thought to be historically misleading as, although these mosaics originated in Rome and referenced ancient art, they did not exist until the late eighteenth century.

Gilbert collected micro mosaics throughout his life and amassed one of the largest collections in the world. He also collected Pietre Dure, mosaics of Florentine origin, which used more costly marble and semi-precious stones. His collection is now held in the Victoria & Albert Museum in London and in The Los Angeles County Museum of Art (LACMA) in Los Angeles.