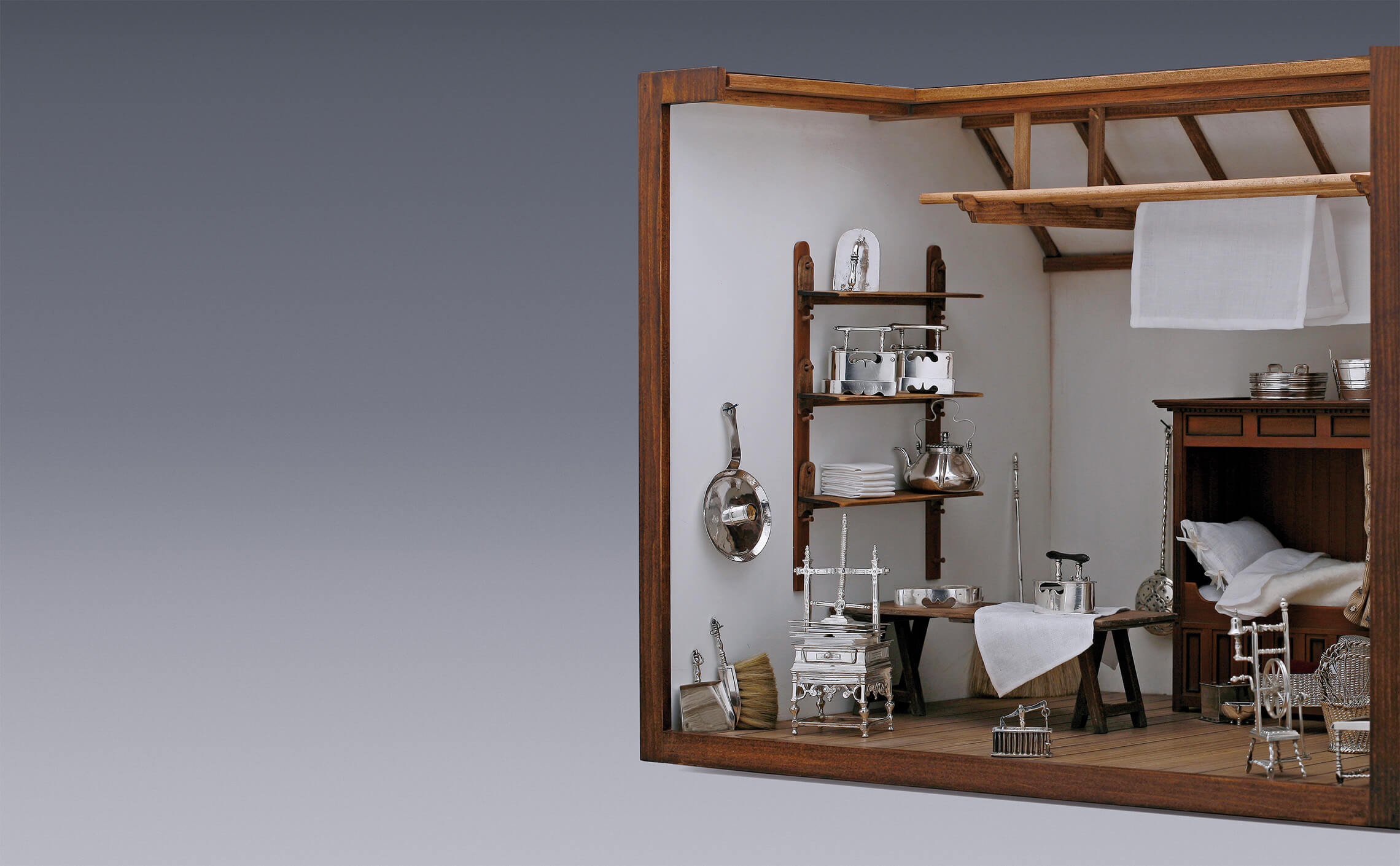 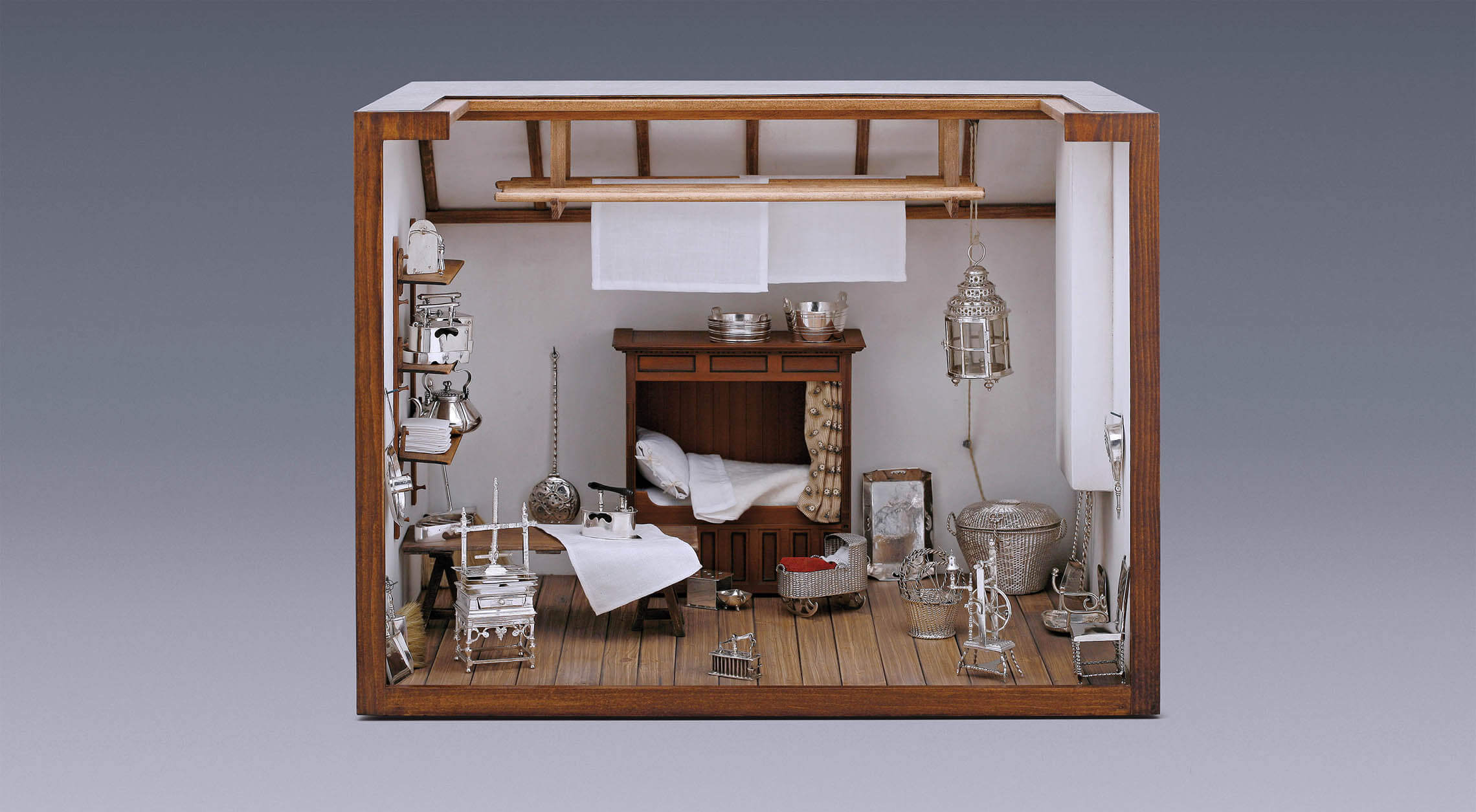 The attic floors of the seventeenth-century merchants’ houses along Amsterdam’s canals were working spaces where many of the jobs involved in running the house were done. There were linen rooms, larders and peat stores. This model linen room is furnished entirely with antique Dutch silver miniatures from the seventeenth and eighteenth centuries, which present a picture of the everyday housekeeping in that period.

The seventeenth century—the Golden Age—was a period of great prosperity for the Northern Netherlands. Huge profits were made by trading grain and other bulk goods, such as salt and timber, which were imported from the Baltic states. The Dutch East India Company, founded in 1602, also contributed to Holland’s wealth, by importing exotic goods and spices from Asia. Most of these goods were traded in Amsterdam and by the end of the sixteenth century, the city’s favourable position had helped it to grow into the greatest port in the world. Amsterdam was inundated with people who wanted to live and work in this city where money was to be earned. It soon became far too small and so was expanded several times. During the second expansion, in 1613, work begun on the construction of the canal ring: Herengracht, Keizersgracht and Prinsengracht. Rich merchants had magnificent mansions built there. The houses along these new canals were furnished and decorated in the latest fashion, with seventeenth-century architects taking their inspiration from the most prestigious interiors of the Italian Renaissance.

Housekeeping in these grand residences was extraordinarily labour-intensive throughout the period. Everything had to be done by hand. In the most distinguished households the actual work was done by a battery of staff. In some cases, every member of the family had their own servant. Merchants and prosperous citizens would generally employ a kitchen maid, a maid of all work, a wet nurse and a nursery maid, who would also help with the sewing.

One of the servants’ duties was to take care of the clothes and linens, and there was a room in the attic for this. Expensive outer clothes, made of thick wool, silk or velvet, could not be washed, and the only way to clean them was by beating them, sponging them or brushing them with clothes brushes. Linens also had to be handled with care, particularly the costly damask tablecloths, the lace-trimmed bedding and the lace collars and cuffs. Linens were not actually washed in the linen room. Large items were laundered outside the house, but pressed and finished in the linen room.

Linen had to be washed, bleached, dried, stretched, ironed, beaten and pressed. It was very labour-intensive work, and table and bed linens, in particular, were sent out to specialist laundries for washing and bleaching. These were usually outside the city, where there was plenty of running water and space for bleaching fields. Laundry lists were drawn up recording what had been sent. The laundry was sent out only a couple of times a year—there are records of the Great Wash or the Grand Wash. Smaller items like shirts, collars, cuffs and caps were probably often laundered at home since they rarely appear on laundry lists. Although items were not washed in the linen room, wet laundry was hung there to dry. Once it was returned to the house, the laundry was finished in this room and put away. Specialist laundresses could be brought in for starching, goffering and ironing.

The washing was sent to the laundries in large baskets, and different types were kept in the linen room. The most expensive items were sent in baskets with locks. There is one such basket in this linen room, woven entirely from silver wire around 1700.

Drying racks or airers were an indispensable feature of the linen room, attached to the ceiling on pulleys. Washing could be dried on them or damped for ironing.

Damp or dry linen was pulled into shape then ironed on ironing boards—loose boards on trestles. A variety of irons was available for pressing, including charcoal irons and flatirons. On the wall rack there are two on stands, one made by Arnoldus van Geffen in 1760 and the other by Daniel van Strant. The flatiron was made by Wessel Jansen in about 1670. The iron with the stand on the ironing board was made in 1744 by Maria Breda, one of the first female silversmiths. Small linen items like caps, collars and cuffs were polished to a sheen with smoothers or slickstones.

After the linen was mangled or ironed, it was folded neatly and placed in a linen press. Because linen was so expensive, seventeenth-century linen presses were often beautifully made, ornate pieces of furniture that were kept in the principal rooms to show off the owners’ wealth. There were also linen presses—not as elaborate—in the linen room. Estate inventories reveal that linen presses were sometimes so heavy that they were sold along with the house as fixtures. The miniature silver linen press in this room, which was made in Amsterdam around 1730, has a drawer and silver press plates that can actually be screwed down.

Once the laundry was ironed, folded and pressed it was put into baskets or mangle tray to be transferred to the correct cupboard. There is a miniature example made by Pieter van Somerwil I around 1725 against the back wall.

Holland’s damp, often cold climate meant that some form of heating in the house was essential for most of the year. While the range in the kitchen would have been the only source of heat in ordinary dwellings, in the late seventeenth century and throughout the eighteenth a wealthy gentleman’s house would have had several fireplaces. This linen room has an unusual seventeenth-century hearth made by Jacob Dijkman. There were also sources of heat that could be moved around, such as bedpans like this one, made by Jan Koningh of Enkhuizen in 1764, as well as footwarmers and braziers in which pans of glowing embers were placed. This silver one by Arnoldus van Geffen dating from 1760 is a perfect replica. The full-size pieces were wicker baskets.

Only the very richest, following Louis XIV’s example, had a four-poster bed. Most people, including the servants, slept in box beds on the upper floors and in the attics.
The room also contains a cradle by Arnoldus van Geffen, a rare seventeenth-century mousetrap by Hendrik van der Star, a large lantern and a spinning wheel by Arnoldus van Geffen. Except for the bedpan, all these miniatures were made in Amsterdam, some in the seventeenth but most of them in the eighteenth century.