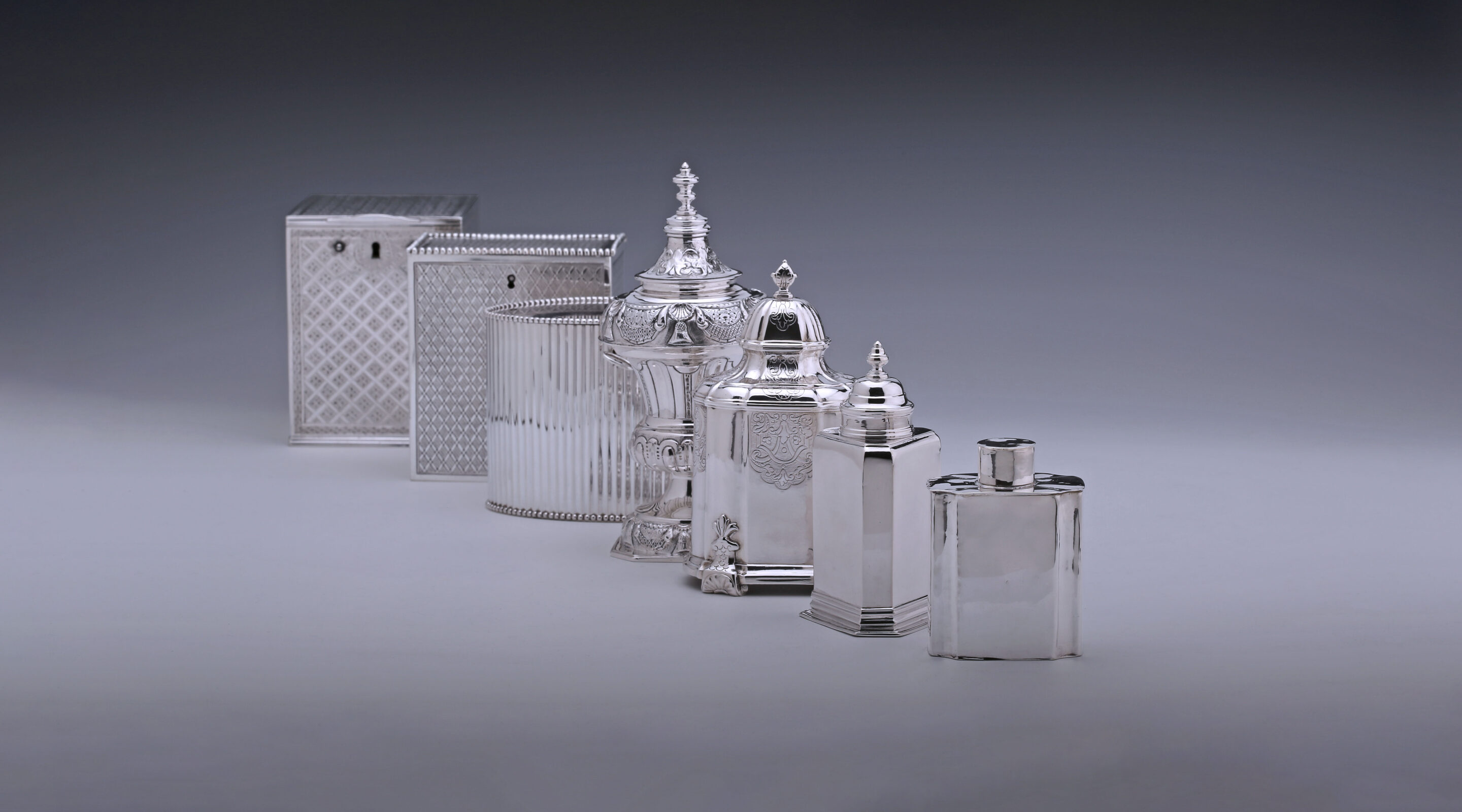 This charming tea caddy was made by Carolus van Dockum who worked in Breda. He made this small tea caddy in 1712. The shape is very restrained. The rectangular canister has concave corners and the sides are completely smooth all around. The top of the tea caddy has four ribs running from the corners to the round cap in the center. An identical example by the same maker and from the same year is part of the collection of the Breda Museum and is pictured in the catalog on Breda silver: Zilver en zilversmeden uit de baronie van Breda (nr 42, page 93).

The Hague silversmith Johannes van der Toorn I made this tea caddy in 1722. This striking triangular model is among the rarest Dutch silver tea caddies. Only 8 examples are known so far, of which this is the earliest. Like this one, almost all of them were made in The Hague. The basic shape is triangular with chamfered corners. The sides are completely smooth, accentuating the clean lines. The round cap has two profiled bands with a smooth edge between them. On top, the cap is domed with a small round baluster-shaped knob. An identical example is in the collection of the Kunstmuseum of The Hague which was also made by Johannes van der Toorn I.
(See: catalog: Haags goud en zilver, Gemeente Museum Den Haag, 2005. Page 350 cat.nr 191)

This distinguished tea caddy was made by Gerrit Boverhof in 1745. It is a beautiful and very rare example of a tea caddy in the rich Amsterdam Louis XIV style. Only a few examples of such luxurious tea caddies are known to have been made primarily in Amsterdam. The rectangular tea caddy has recessed quarter-round corners. The sides are engraved with a fine symmetrical pattern of strap work with stylized French lilies between them against a matted background. This decoration is repeated on the recessed neck and on the domed cover. On the cover is a beautifully executed knob with leaf motifs. The tea caddy stands on four chunky cast feet decorated with shell and lily ornaments.

A Tea Caddy in the Shape of a Garden Vase

This tea caddy was made in Haarlem by Casper Janszonius and is modeled completely like a garden vase. The tea caddy stands on a square base with chamfered corners. The round, convex plinth is decorated with embossed lambrequins with shells and tassels between them. This decoration is enlarged and beautifully detailed repeated at the top of the canister. The body of the tea caddy sits on a smooth tapered neck and has a chased knarled rim along the bottom edge. Above this are embossed fluted cannelures. The round conical cover is decorated with acanthus leaf. The finial on top of the cover is also shaped like a small garden vase.
A very similar example by the likewise Haarlem silversmith Jacob Groenewegen is part of the collection of the Frans Hals Museum in Haarlem.
(Pictured in: Haarlem silversmiths and their marks, K.A. Citroen, page 170 fig. 54)

The sleek design of this tea caddy can easily be confused with the Art Deco style of the early 20th century. Nevertheless, this tea caddy was made 228 years ago in 1794. The oval tea caddy has beaded borders along the base and the cover. The lid is completely flat and smooth. The sides are surrounded by vertical ribs that create a beautiful reflection of light. It is fitted with a lock and original key. A feature introduced on tea caddies in the last quarter of the 18th century. The lock was intended to prevent the maid from stealing a pluck of tea from the caddy.

This handsome tea caddy is an extremely early Dutch example of the Louis XVI style. This new fashion was at that time just introduced into Dutch silver. Reynier Brandt has very delicately engraved this tea caddy with a lattice or wickerwork pattern. Along the rim of the cover is a beaded border. The hinge of the cover is invisibly concealed in the beaded border.

A Large and Elegant Tea Caddy

This large and heavily executed tea caddy was made by one of the most renowned Hague silversmiths who was active in the late 18th century. He was clearly inspired by his Amsterdam colleague Reinier Brandt who made the tea caddy described above. A similar decoration was applied with an engraved lattice pattern on the flat sides of this tea caddy. Francois Simons placed this pattern in a frame which is decorated with a twisted cable motif. Around the keyhole is engraved a rosette. The size of this tea caddy is among the largest made in the 18th century.

The first tea arrived in the Low Countries around 1605. The flourishing trade with the East meant that larger consignments were reaching the country by around the middle of the seventeenth century. Like so many new products, tea was an exotic new article that was initially thought to have medicinal properties. Towards the end of the seventeenth century tea was being drunk as a luxury beverage as it was extremely expensive. The demand was boosted to the extent that price rose to as much as a hundred guilders a pound. Because tea was so luxurious, the first silver utensils in which to keep tea and dispense it appear in the Netherlands toward the end of the 17th century. The earliest known Dutch silver caddies date from around 1695. During the 18th century, different qualities of tea were introduced to the market, allowing more people to afford it. In the second half of the eighteenth century, the better qualities of tea were still very expensive.