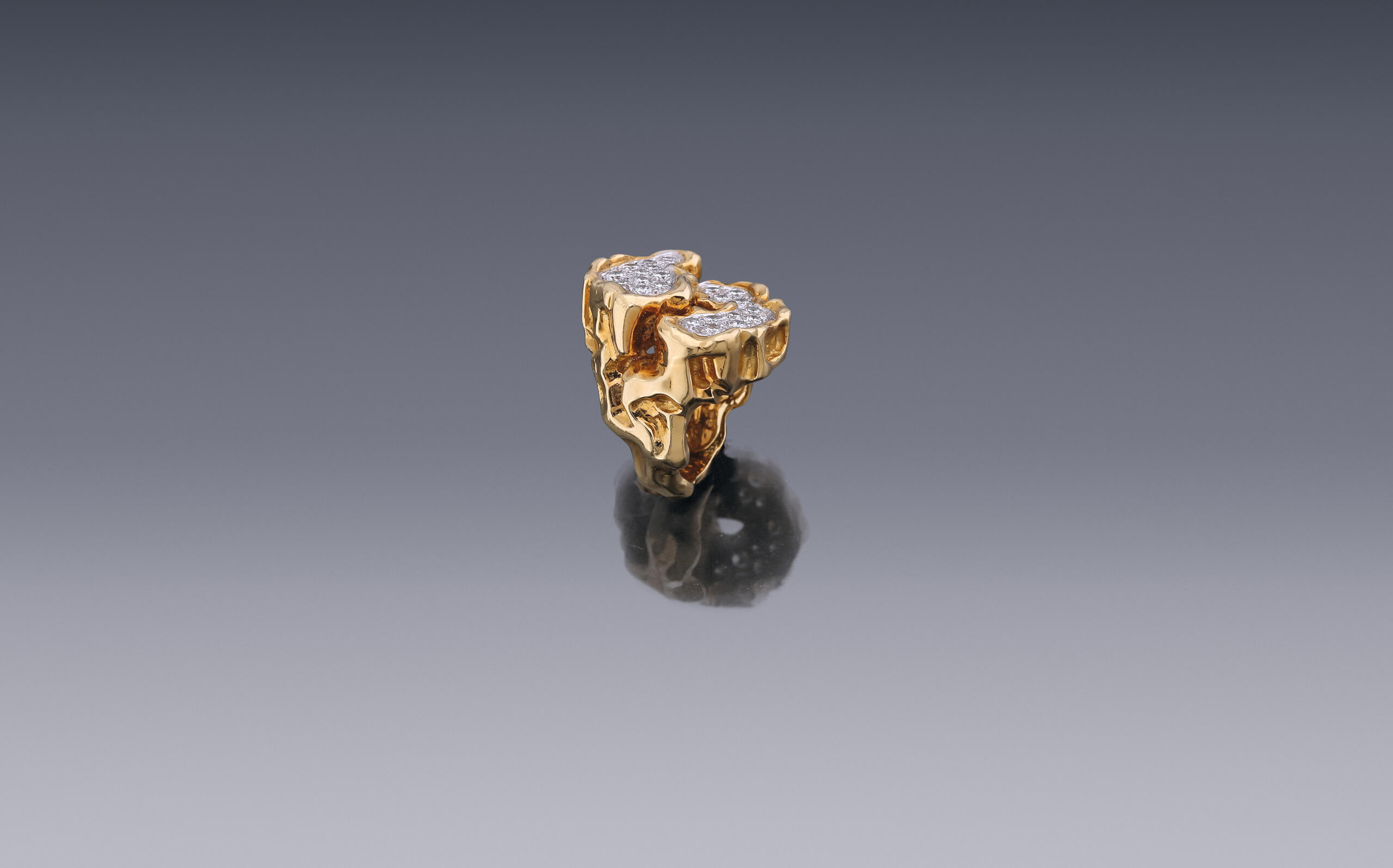 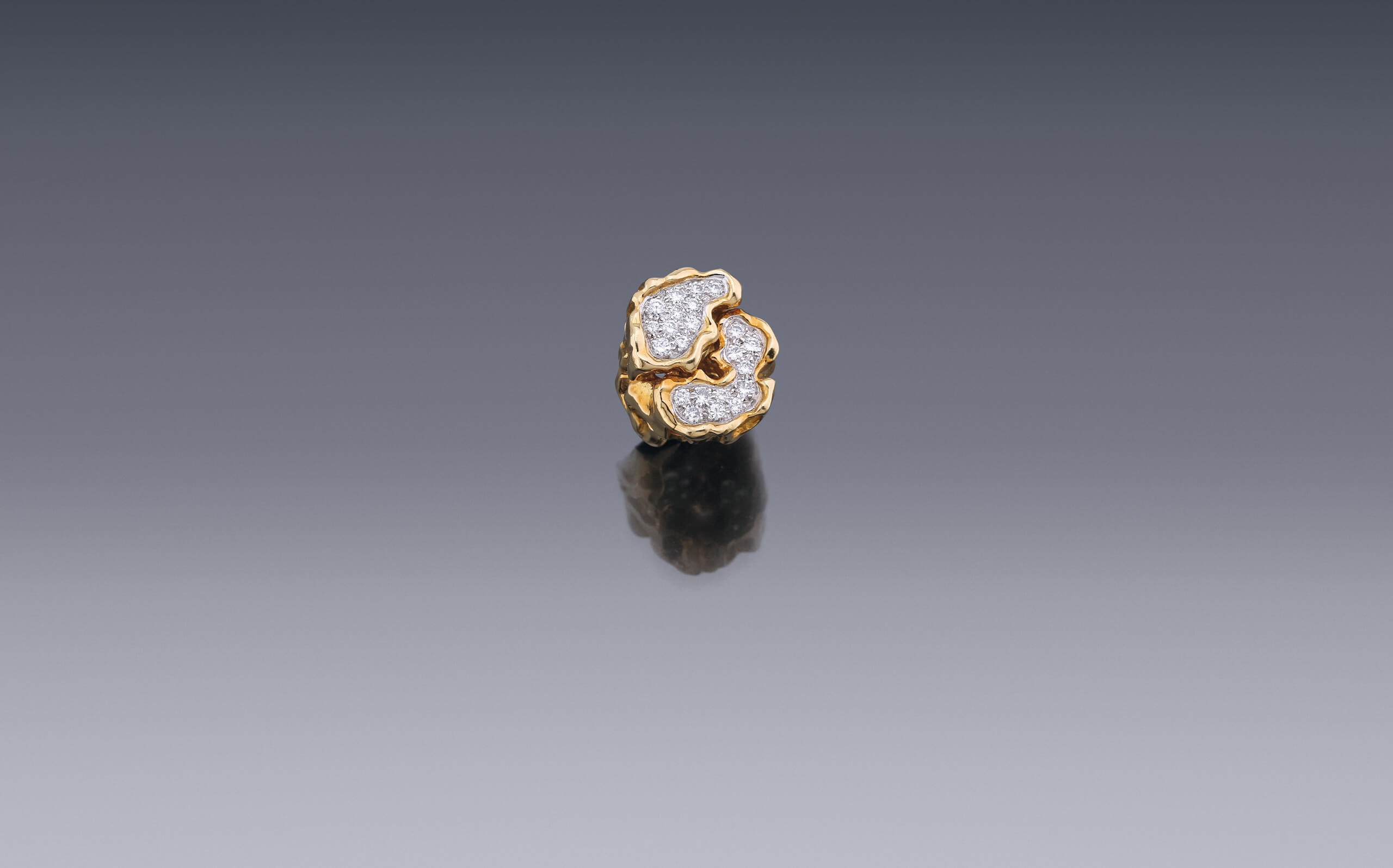 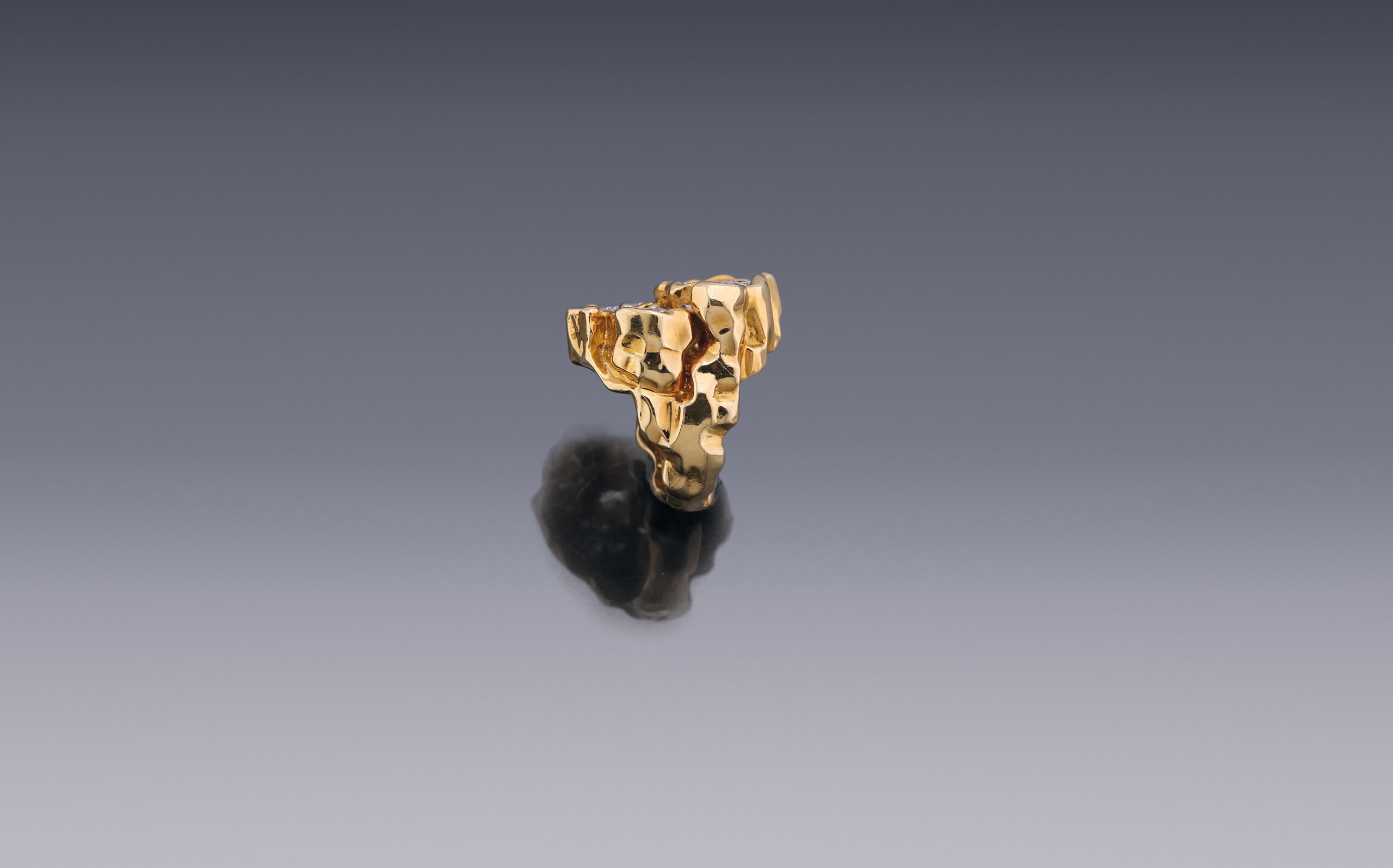 References to Sputnik, Halley’s Comet, the moon, the stars and the planets are seen in jewelry dating from the Georgian period through present day designs. This striking cocktail ring was made in 1974 by London jewellers Kutchinsky. The design was inspired by the first moon landing, which launched a wave of space-related and futuristic designs-like this ring, an eighteen-carat gold and diamond lunar landscape.

After the Second World War, the Soviet Union and the United States became embroiled in a bitter Cold War of counter espionage and propaganda. Space exploration and satellite technology were important tools in this struggle—not only to spy on one another but as propaganda to demonstrate their scientific supremacy and the military potential of these developments. The two superpowers worked hard to gain the advantage. The foundations of the space race had been laid.

In 1957, Russia launched Sputnik 1, the first satellite to go into orbit around the earth. As a response to Sputnik, the US made huge efforts to keep pace with the USSR in terms of technology. Both world powers had successes, but the ultimate goal was to put a man on the moon, and the US did everything possible to be the first to achieve it.

On 16 July 1969, at 2:32 GMT, NASA launched Apollo 11 into space. Although both powers had already carried out flights with animals, this was the first time that a manned rocket was sent to the moon. The lunar mission was broadcast live on television and millions of people all over the world were glued tot heir seats. If the mission was a success, it would mean that man would stand on the moon for the first time.

On 20 July, the Eagle landed on the moon and Armstrong became first person to set foot on the moon

Neil Armstrong, Edwin Aldrin and Michael Collins left the earth and headed for the moon. It entered into lunar orbit and Aldrin and Armstrong transferred to the lunar lander, the Eagle. On 20 July, the Eagle landed on the moon and Armstrong became first person to set foot on the moon, speaking the famous words: ‘That’s one small step for [a] man, one giant leap for mankind.’

The space flights and the images of them captured the public imagination. Science Fiction books and films, from A Space Odyssey to Star Trek became immensely popular, and the influence was evident in all branches of art. Futuristic, organic ‘extra-terrestrial’ forms, crater landscapes, robots and capsule shapes were ubiquitous. There was the Atomium in Brussels, the Finnish architect Matti Suuronen’s capsule houses and the Ball chair, a capsule design by Eero Aarnia.

Many of the jewels designed by Kutchinsky are large and striking

All the renowned jewellery houses, from Van Cleef & Arpels to Cartier and Kutchinsky, produced designs inspired by the images from space; from ‘Apollo’ earrings, and crater bracelets to Sputnik rings. This ring by Kutchinsky is a magnificent example of the genre. In the gold shank there is a craggy interpretation of the lunar landscape. On top of the ring are two large craters set with diamonds. Like the moon landing itself, the quirky design of this ring is truly exciting.

The House of Kutchinsky was established in 1893 by Hirsch Kutchinsky, who had fled from Poland to England with his son Morris and other members of his family. Arrived in London, they opened their own modest jewellery shop in Commercial Road in the capital’s East End, the poor part of the city where many Eastern European Jewish immigrants had settled since the mid-nineteenth century. The Kutchinskys brought with them years of experience and skill as jewellers and had even worked at the court of Ludwig of Bavaria. They were rapidly recognized for their refined platinum and diamond jewels that were the height of fashion at that time.

In 1928 Morris’s sons, Salomon and Joseph, came to work in the business. Joseph was only fourteen, but already a skilled diamond cutter. He had a great feeling for the trade and strong commercial sense, and over the years developed into a gifted salesman. He soon took over the business, and it was under his management and with his vision that the company flourished. In 1958 the shop moved from Commercial Road to Brompton Road in Knightsbridge, in London’s chic West End, around the corner from Harrod’s, the famous department store.

Many of the jewels designed by Kutchinsky since the end of the nineteen-forties are large and striking. The bold designs attest to immense craftsmanship. The extravagance of the pieces was a reaction to the austerity and rationing of the war years. Brooches, bracelets, earrings and rings were all set with round, marquise or baguette cut diamonds, coloured gemstones, coral or turquoise. Kutchinsky designs are synonymous with whimsical animal and bird shapes, made in eighteen carat gold and set with precious stones. In the nineteen-eighties and nineties, Joseph’s sons, Roger and Paul, took over the running of the firm. They were the fourth generation of Kutchinskys in London. Under their management, the brand became hugely popular in the Middle East. In 1991 the company was sold to Moussaieff Jewelers Ltd.