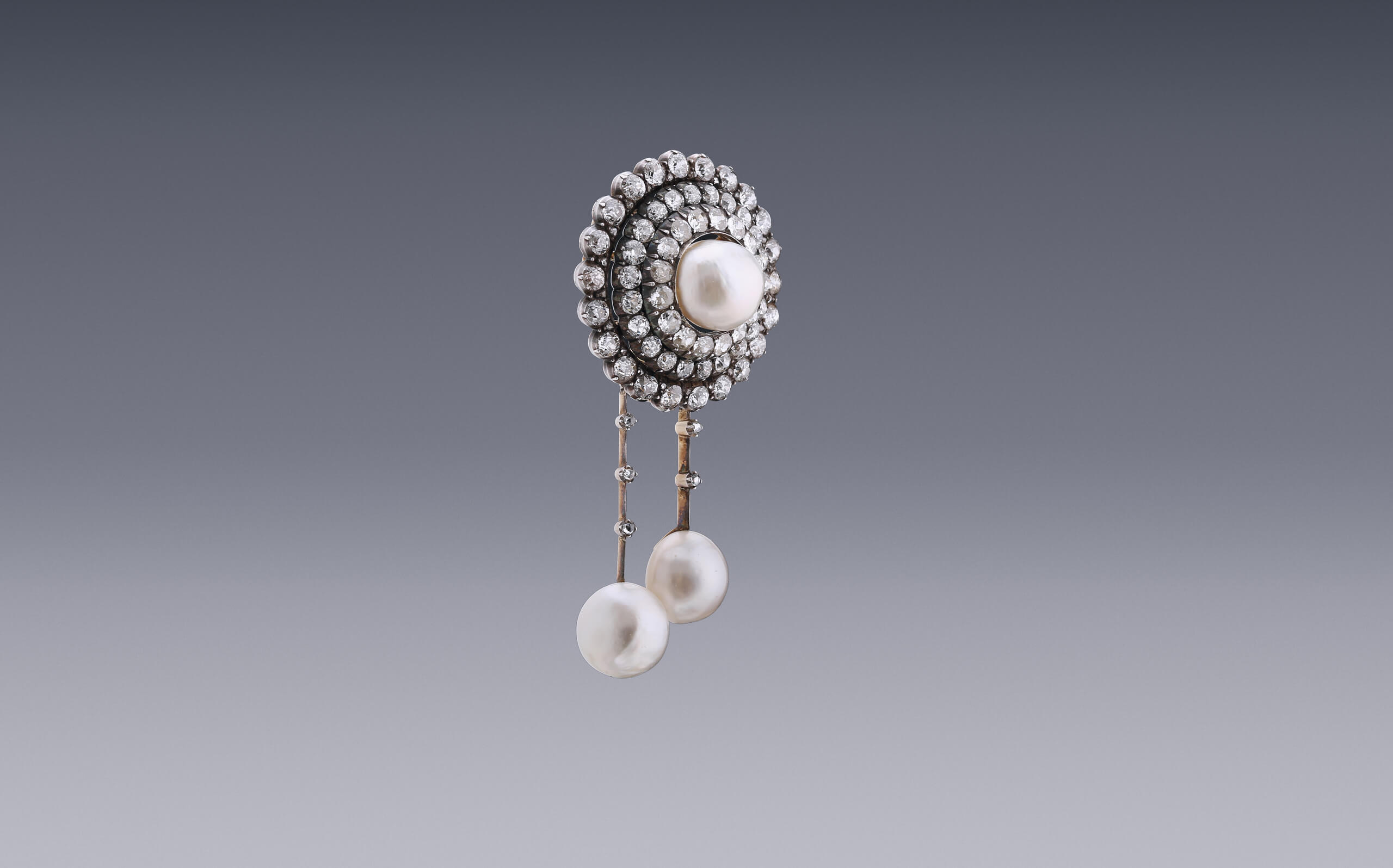 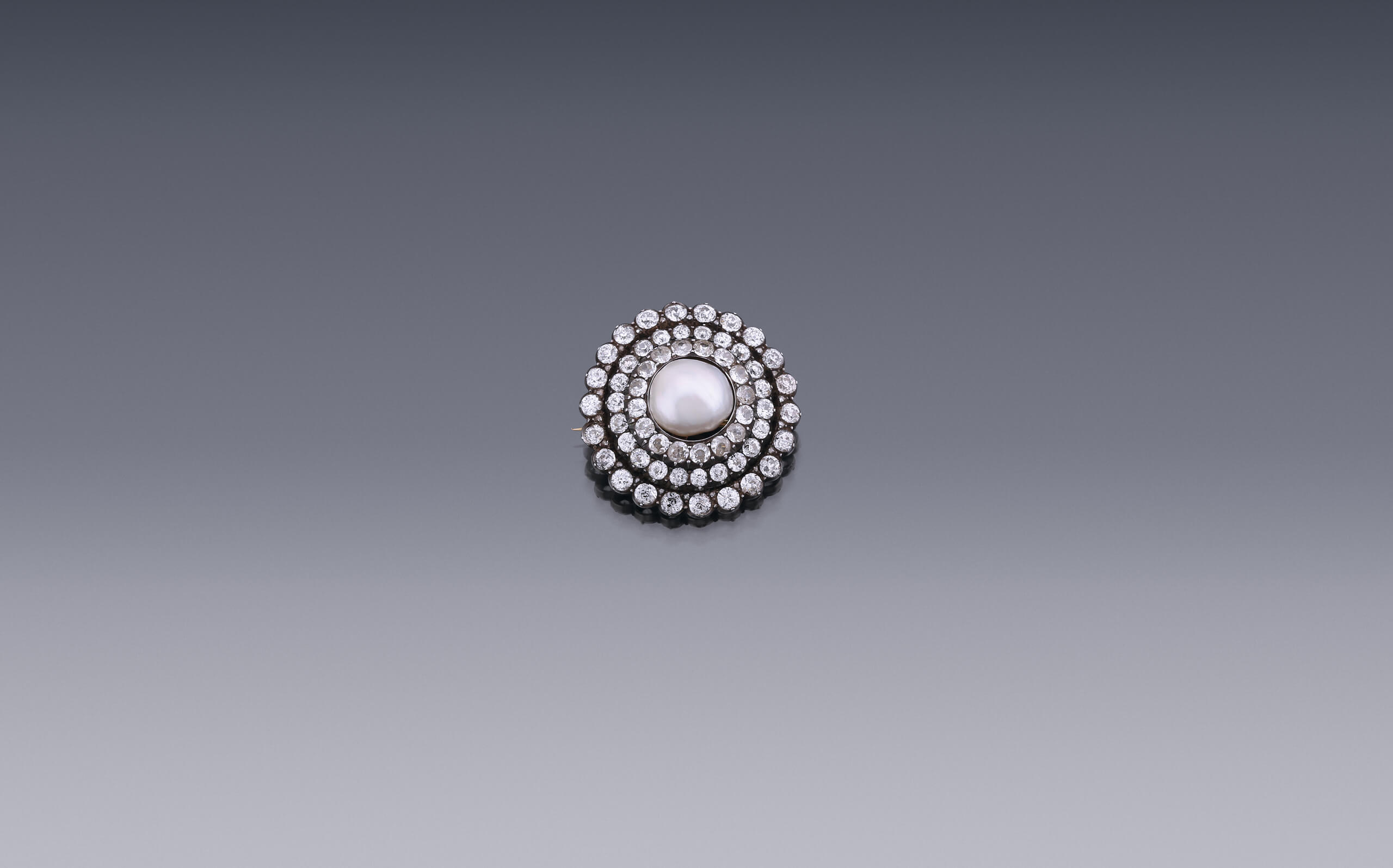 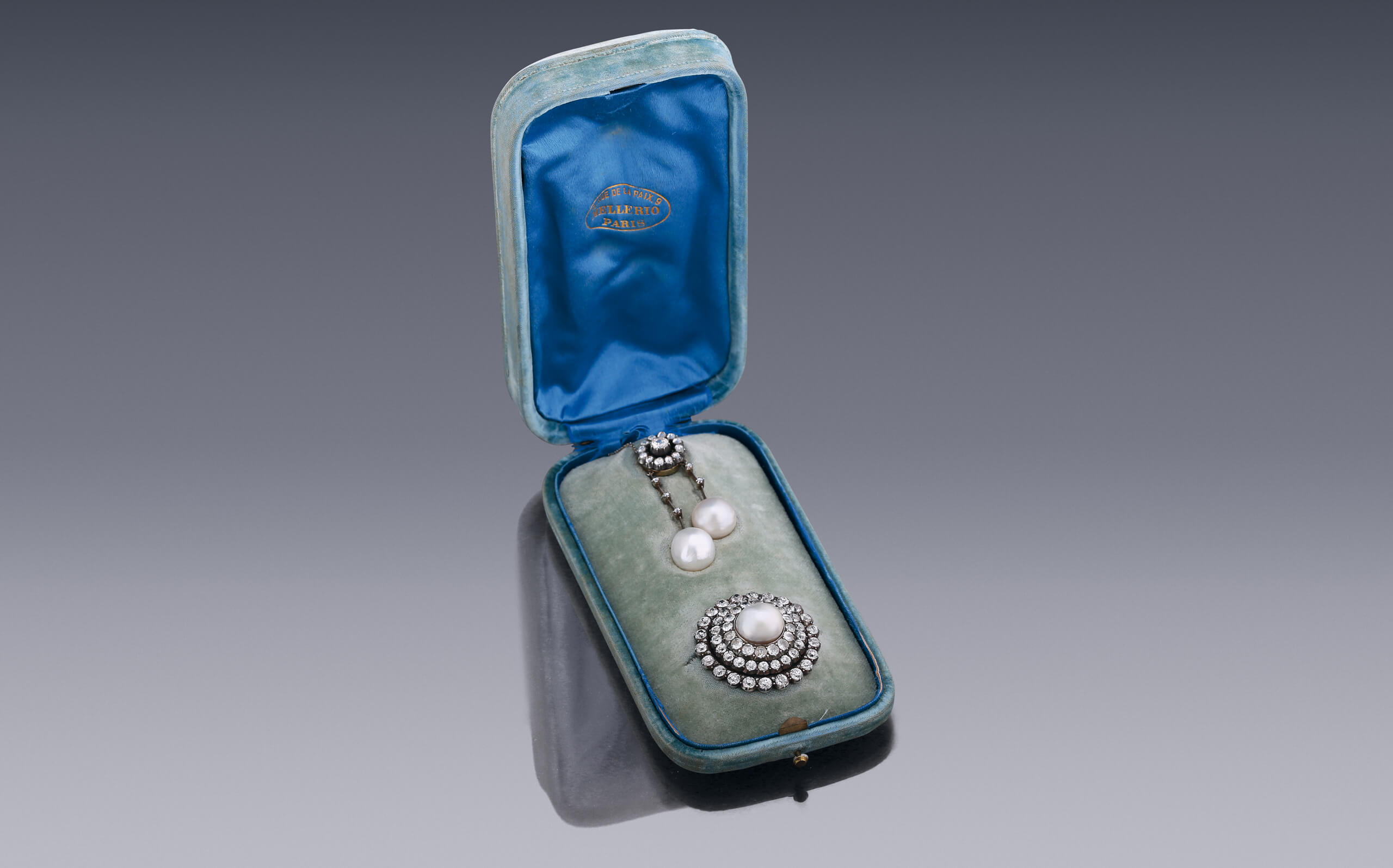 This important demi-parure is set with natural pearls and diamonds. Natural pearls have always been rare, unique and precious. Many special pearls have even been given names of their own and often have a long history. These status symbols of Kings, Sultans and Patricians sometimes reached astronomical prices. People were prepared to spend a fortune for real pearls. In 1917, Jacques Cartier bought his world-famous six-storey house on Fifth Avenue in New York for ‘just’ two pearl necklaces.

This demi-parure made by Mellerio in Paris in 1910 consists of a round brooch–a so called target brooch-and a necklace. The brooch is set with a large natural baroque pearl, of 13.58 carats, surrounded by three rows of a total of sixty old-cut diamonds, set in silver on gold. The necklace, of the type known as a négligée, has a fine chain of white gold links with a floral rosette, set with thirteen rose-cut diamonds. They are mounted in a setting of silver on yellow gold. Suspended from the rosette at different heights, on chains with links set with diamonds, are two large, natural baroque pearls. The part with the two pearls can be unscrewed from the diamond rosette and suspended from the ‘target’ brooch for an even more impressive effect.

The French word ‘parure’ means set. The word derives from the reciprocal verb parer, which means ‘adorn’, ‘beautify’ or ‘dissemble’. A parure is a set of jewellery. This could be a combination of a tiara, a diadem, earrings, a necklace, bracelets, rings, clips and pins. A parure has at least three matching pieces and often consisted of six or seven. When a set has fewer pieces, it is known as a ‘demi-parure’, a half set. The concept of the parure dates from the era of the flamboyant Baroque in the seventeenth century.

The French court dictated fashion and French aristocrats, women and men alike, did everything they could to look as ‘finished’ as possible: towering wigs, heavily made-up faces and the most exaggerated outfits in the most expensive fabrics like silk and brocade. Before this, jewellery had an individual meaning that told one something about its owner; from around the mid-seventeenth century the jewel simply became a decorative object that served to display the status and wealth of its owner.

The négligée is a refined, light type of necklace with two dangling pendants at different heights. This chain was popular from the end of the nineteenth century until the nineteen-thirties, the Fin-de-Siècle and the Art Deco period. The négligée is a variation on the centuries-old Lavalier -or lavalière or lavallière- necklace. This is a long, slender chain comprised of small links, with a single–usually pearl–drop pendant. The lavalier was named after the Duchess Louise de la Vallière, one of the mistresses of the Sun King, Louis XIV, who popularized this type of necklace at court in the mid-seventeenth century. At the end of the nineteenth century the ‘Lavallière’ came back into fashion after the actress Ève de Lavallière, the stage name of Eve Ferroglio, regularly wore one.

The famous French jewellery house Mellerio has been in business for more than four hundred years, making it the oldest surviving family firm in the European jewellery business. The family originally came from the north of Italy, from a small mountain village in the Vigezzo Valley, and emigrated to Paris in the sixteenth century.

The conspirators were unmasked
and the king was saved

They owe their position in France to an extraordinary event. At the beginning of the seventeenth century, a young Italian chimneysweep in the Louvre chanced to overhear plotters conspiring to overthrow the twelve-year-old King Louis XIII. Jean-Marie Mellerio, who at that time was the consul for the Italian community, was told. He informed Marie de’ Medici, who was acting as regent of France on behalf of her son. The conspirators were unmasked and the king was saved.

Marie de’ Medici, herself of Italian descent, was so grateful that she gave the inhabitants of three villages in the Vigezzo Valley a licence that entitled them to produce valuable items without having to pay tax on them and practise their profession throughout the kingdom. And thus the jewellery house of Mellerio was born in 1613. These rights were renewed until the time of Louis XVI, and each new generation built on the one before. The increasingly more important clientele grew steadily. At the end of the eighteenth century, Mellerio could count Marie- Antoinette, the French queen, among its clients, and in the nineteenth century Mellerio emerged as the leading luxury jeweller of the beau monde throughout Europe.

Jeweller of the natural pearl

At the beginning of the nineteenth century, Mellerio was known as the place to go for natural pearls. The pearls came chiefly from the Persian Gulf and southern India. Pearls consist of mother of pearl and form in mollucs, among them oysters. Cultured pearls did not exist before the eighteen-nineties and it is estimated that in nature only one in 15,000 wild oysters contains a pearl. They are therefore extremely rare and consequently very valuable. A pearl used to be even more expensive than a diamond.

In 1830 Mellerio started to make jewels more versatile. The pieces were interchangeable and, like this demi-parure, could be reconfigured for different occasions: from very formal to more everyday, for evenings and for day wear. Mellerio used ingenious systems with concealed fastenings.

When wearing this demi parure you will find yourself in excellent company. The royal collections of Spain, the Netherlands, England and Norway all contain a target brooch made of a large pearl and diamonds with a drop-shaped pearl underneath. Pictured here from left to right are Queen Letizia of Spain, wearing Queen Ena’s pearl brooch from the joyas de pasar collection. The brooch of Princess Beatrix is the lock of a pearl necklace that belonged to Queen Sophie, which can also be worn as a brooch. Queen Elizabeth of England is wearing the Dutchess of Cambridge pearl pendant brooch. 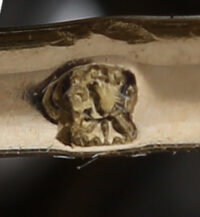