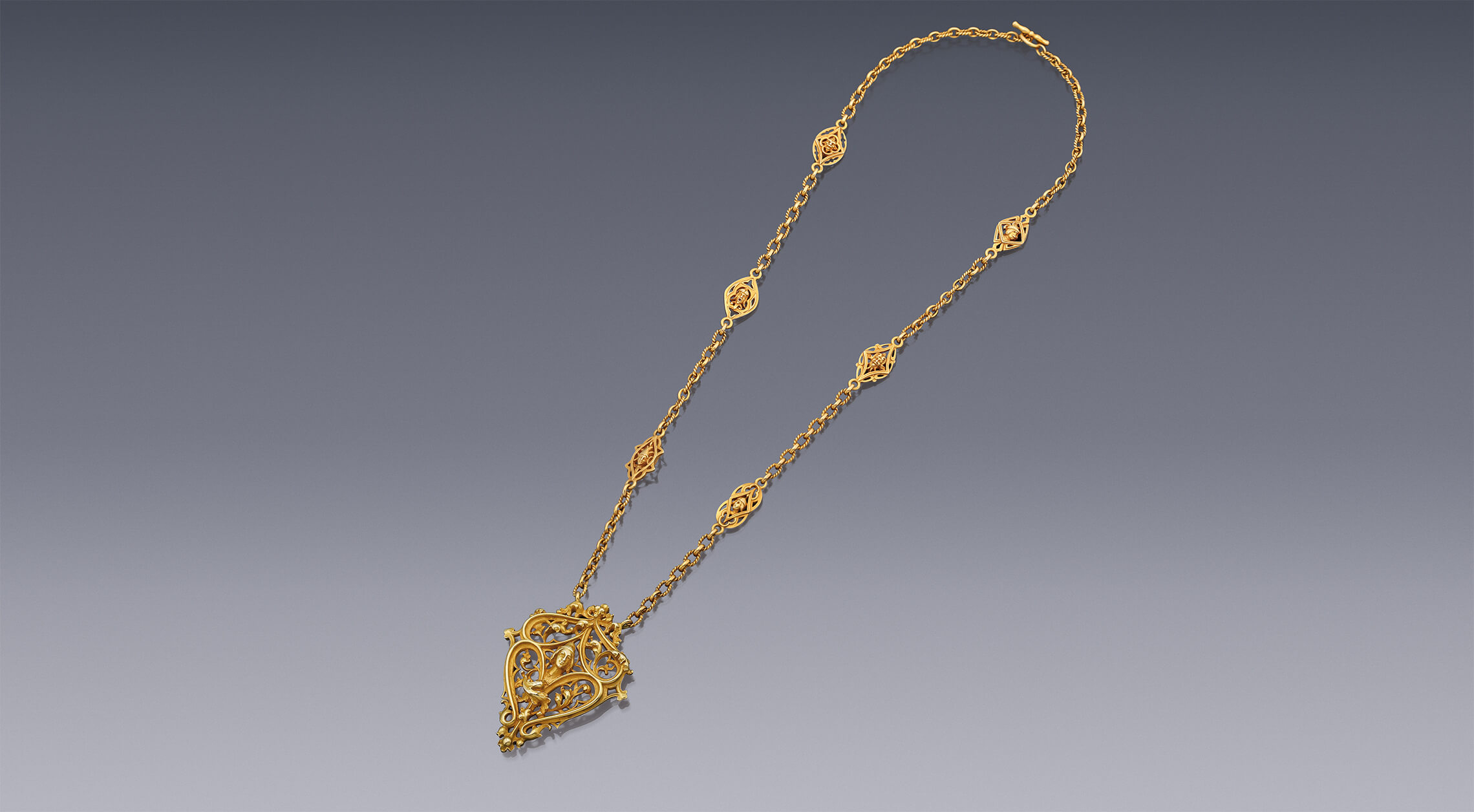 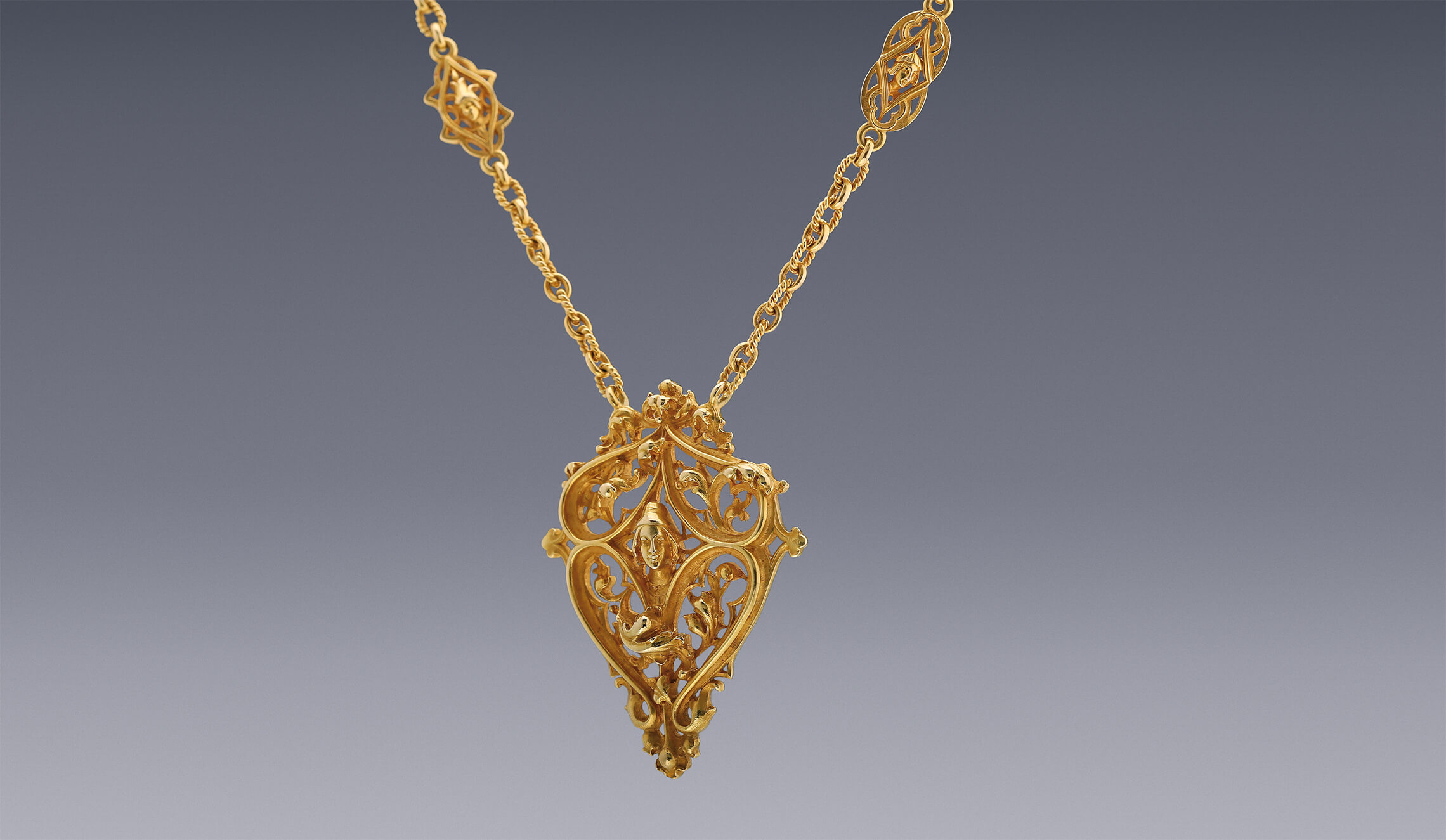 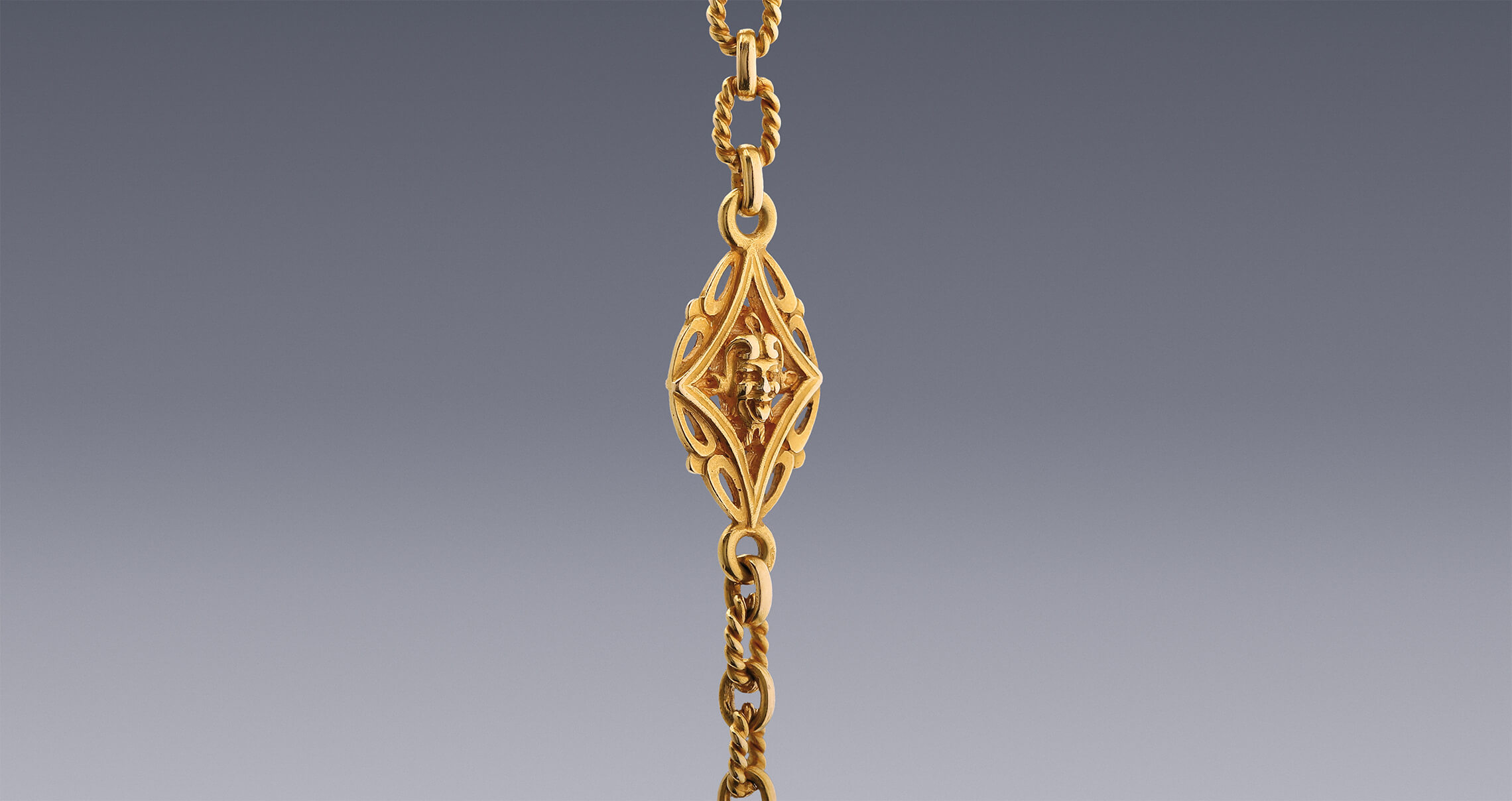 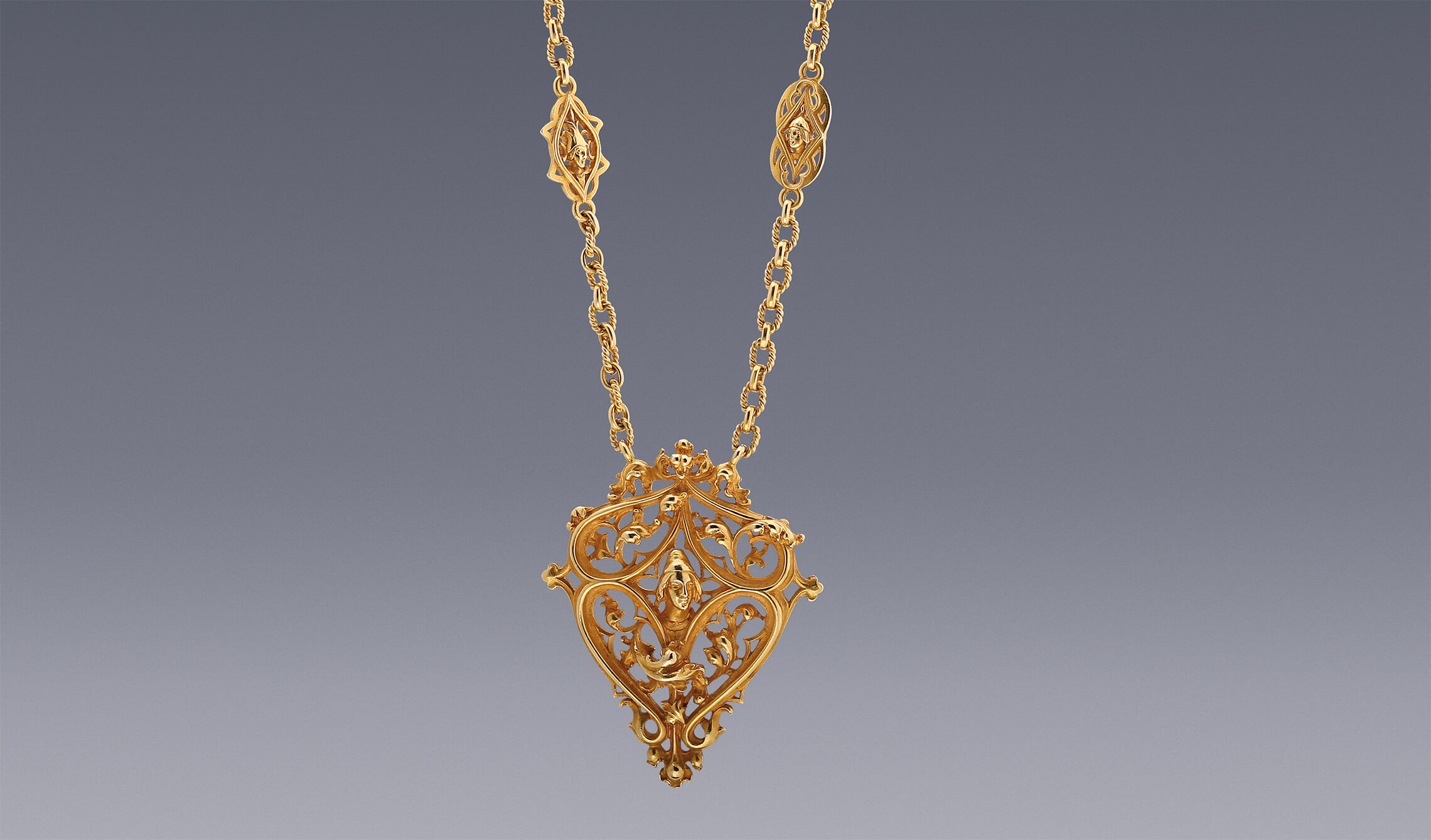 A Neogothical Pendant by Wièse

This eighteen-carat gold necklace was made by the French goldsmith Louis Wièse in Paris, at the end of the nineteenth century. The openwork cast pendant is in the Neogothic style. In the centre of the pendant is the threedimensional head of a young man wearing a hat, surrounded by a lattice of acanthus leaves. The original cable chain incorporates six oval, openwork ornaments. Three of them contain different heads of young men. The other three have grotesque masks: an imp, a fool and a satyr. The openwork links reflect architectural motifs, specifically the windows in Gothic cathedrals and the foliate vines found in late medieval book illuminations. All the same, the design is not precisely like those found in the late Middle Ages. A free interpretation of historical motifs, the style is known as Neogothic.

This nineteenth-century movement originated in Britain in reaction to the straight, cool lines of Classicism with its markedly rational character. People developed a romantic interest in the Middle Ages and believed that the Gothic was its ultimate expression. Initially this interest appeared in literature, where a new genre, the historical novel, emerged. These were fictional tales set against a historically accurate background. Knights and ladies responded to the romantic ideal of the Victorian Age. One of the best-known examples of the genre is the novel Ivanhoe, written in 1819 by the Scottish author Sir Walter Scott. These stories fuelled interest in the Middle Ages, and Gothic elements began to appear in architecture.

The first example of Neogothic architecture actually dates from the eighteenth century. In 1749, Horace Walpole, himself a writer of Gothic tales, created an extraordinary house in Twickenham. He converted what were then a couple of cottages into his vision of a ‘little Gothic castle’ with pinnacles, battlements and a round tower. This estate, which he called Strawberry Hill House, became a very popular attraction and was an important factor in the emergence of Gothic Revival architecture that grew throughout the eighteenth and nineteenth centuries, taking its inspiration from Gothic cathedrals around Europe.

Neogothic caught the public interest in France because of the restoration works undertaken by the architect Eugène Emmanuel Violletle-Duc (1814-1879).  Many cathedrals that had fallen into disrepair during the Baroque and the French Revolution were restored under his direction. He worked on Notre-Dame in Paris and the cathedrals in Amiens, Chartres, Reims, Sens, Toulouse and elsewhere. He also added elements. With elegant pointed arches, ornamental turrets and decorated cross vaults, he made the Gothic more beautiful than it had ever actually been. By present-day standards, Violletle-Duc’s work was too free, too personal and too fantastical for a restorer, but in the nineteenth century his approach was very highly regarded.

The graceful lines of the window tracery, trefoils and quatrefoils, mouchettes, teardrops and curvilinear triangles, lend themselves perfectly to execution in gold. These decorative Gothic elements recur in jewellery. Church windows were a major source of inspiration, as we see in this pendant. Here, Wièse used the motifs of the Middle Ages and the Renaissance in exactly the same way as a Horace Walpole or a Viollet-le-Duc: in a free interpretation.

The work of this pendant’s maker, Louis Wièse (1852-1923), is inextricably linked with that of his father, Jules. Jules Wièse was a renowned goldsmith, born in Berlin in 1818 and trained by Johann Georg Hossauer, goldsmith to the Prussian court. He emigrated to Paris, working first for Jean Valentin Morel and then for François-Désiré Froment-Meurice in 1839. In 1844 Jules Wièse established his own workshop at number 7 Rue Jean-Pain-Mollet, where he employed twenty-five assistants. He collaborated with other Parisian jewellers and goldsmiths, but he continued to undertake commissions for his former employer, FromentMeurice, until 1855. He won various prizes for his craftsmanship, some at the famous 1855 World’s Fair in Paris and the 1862 International Exhibition in London.

Jules’s son Louis was born in 1852. He was apprenticed to his father and took over the business from him in 1880. He did not register his own mark until after his father’s death in 1890, which means that jewellery with his mark was made after that date. Louis was faithful to his father’s characteristic historical Neogothic and Neo-Renaissance styles, even when Art Nouveau emerged and was all the fashion. Some of the pieces bearing Louis’s mark are so similar stylistically to earlier work by his father dating from the eighteen-fifties and sixties that it is safe to assume that he used his father’s old moulds and reissued his designs. This pendant likewise continues his father’s style. Jewellery by Louis can be found in collections in the British Museum and the Victoria & Albert Museum in London and the Musée des Arts Décoratifs in Paris.

Marked on the back of the pendant with the firm’s mark Wiese in Gothic capitals and Louis Wièse’s maker’s mark, Wiese between two stars, in a horizontal lozenge. This maker’s mark was also struck on the eye ring at the end of the chain. An eagle’s head, the French assay mark for eighteen-carat gold, appears twice on the necklace.