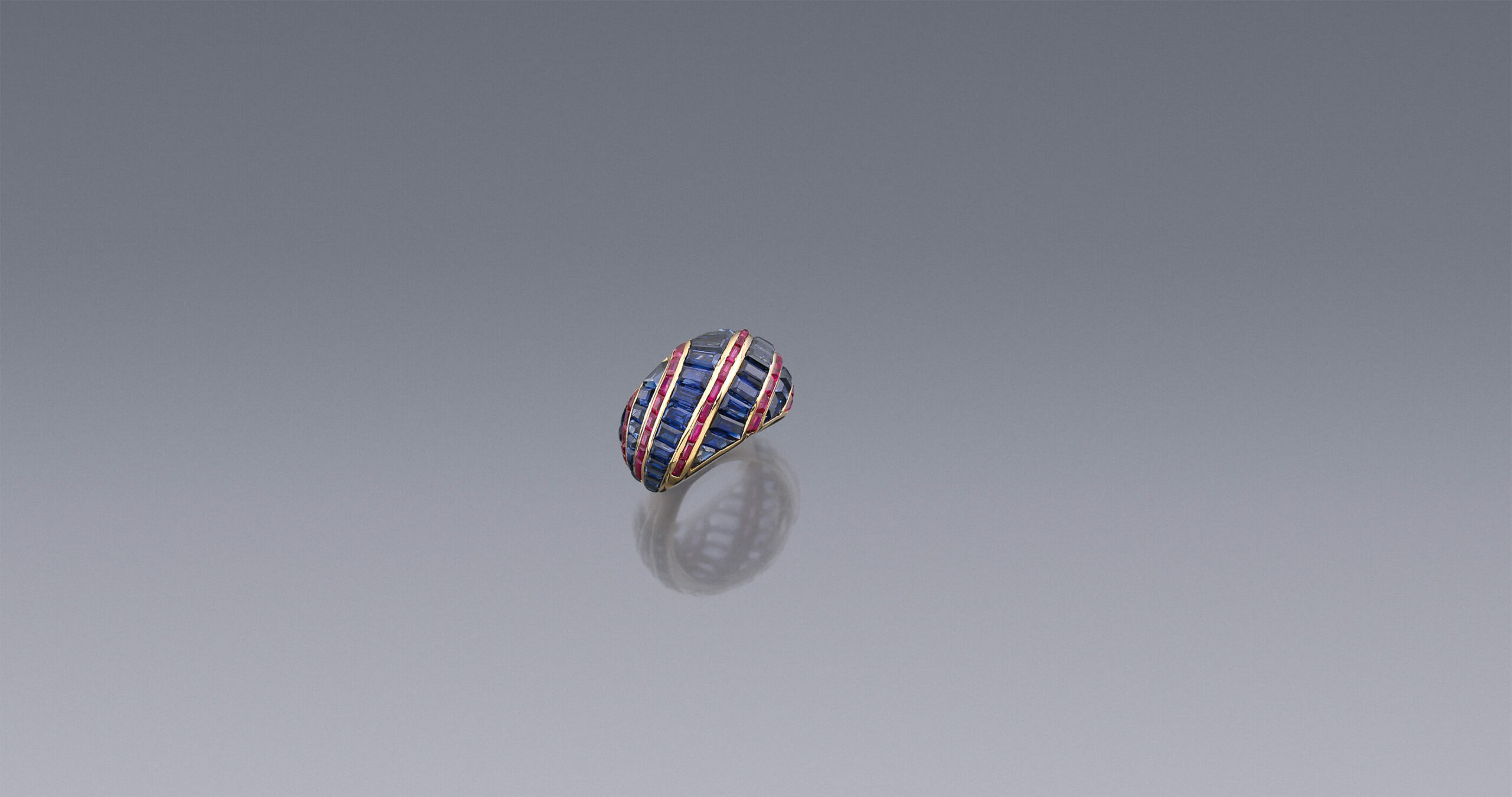 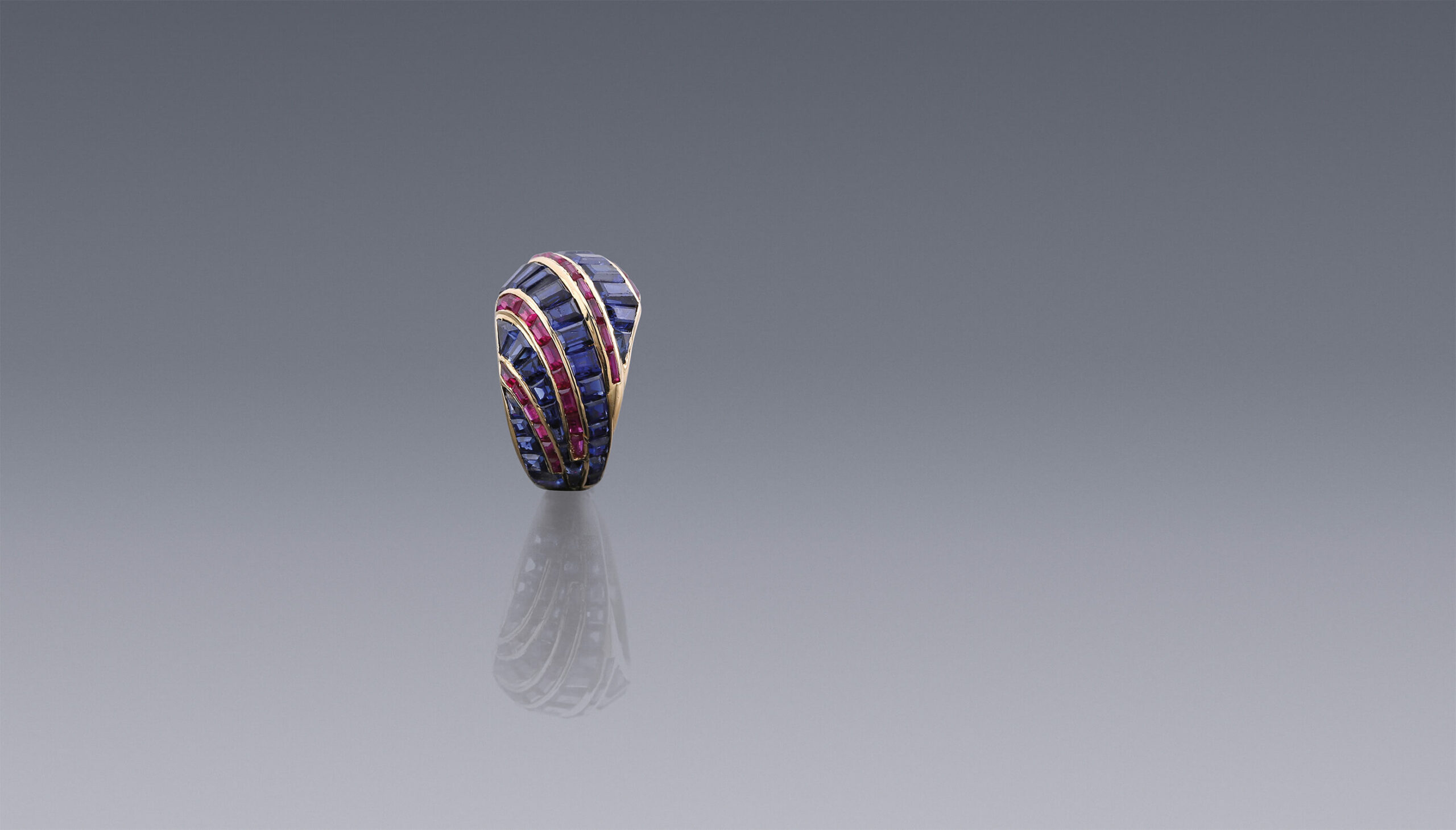 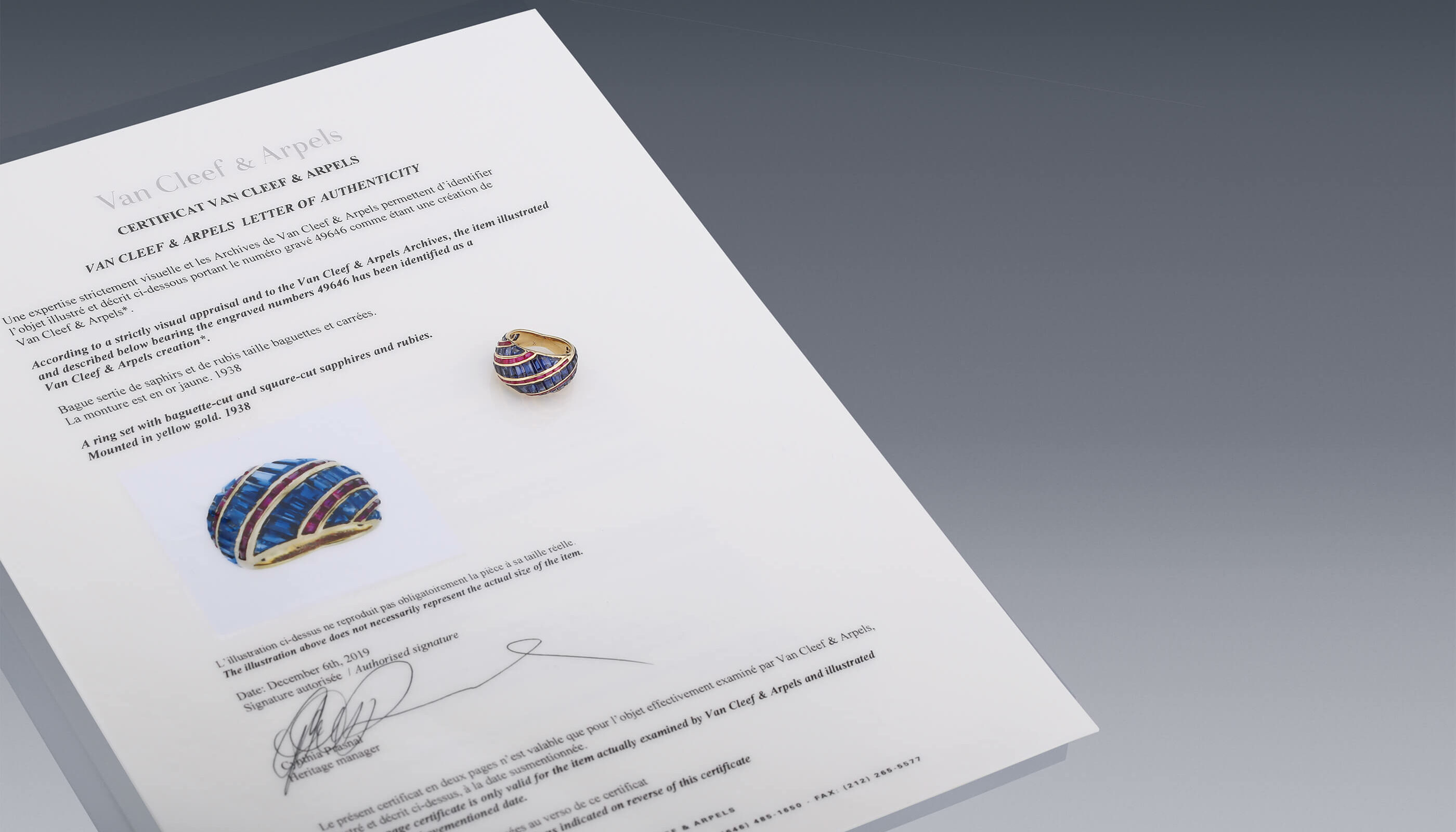 This highly elegant ring, which dates from 1938, is made by the famous French jewellery house Van Cleef & Arpels. It is made of eighteen carat gold, set with curved diagonal bands of baguette and carré cut rubies and sapphires. The stones are set with the use of a technique which is called channel setting.

The stones are set with the use of a technique which is called channel setting. This setting is the preferred type when dealing with angular stones like baguette or trapeze-cut gems. The stones are set between two precious metal strips – a channel – which allows the stones to fit snugly side by side on the bezel. This technique is the forerunner of the Serti Mystérieux, the famous technique that was invented by Van Cleef & Arpels and has brought them great fame. Cut gemstones are set in a gold rail system less than 0.2 mm thick which disappears under the stones. Because the setting is invisible, the stones appear to float. Van Cleef & Arpels patented the technique in 1933. Initially it could only be used on flat surfaces, but in 1938, the year this ring was made, they also found a way of applying the technique on curved surfaces.

Rubies and sapphires are among the costliest coloured stones on earth. They both belong to a class of gemstones that are varieties of the mineral corundum. Pure corundum is transparent, but trace elements create a colour. Ruby, a word derived from the Latin Ruber, which means red, gets its colour chiefly from the element chromium. Sapphire, derived from the Greek Sappheiros or the Hebrew Sappir, is given its colour by traces of various metals such as iron, aluminium, chromium, titanium or magnesium. The best-known variety is the blue sapphire, but there are also grey, black, purple and even colourless variants. It is one of the hardest gemstones.

At the end of the nineteenth century, Estelle Arpels, the daughter of a dealer in precious stones, fell in love with Alfred van Cleef, the son of a gem cutter. The couple married in 1895. The following year, Alfred van Cleef and his father-in-law, Salomon Arpels, established Maison Van Cleef & Arpels. After Salomon Arpels died in 1906, two of his sons, Alfred’s brothers-in-law, joined the firm and together they opened their first shop in the chic Place Vendôme. Shops soon followed in all the fashionable seaside resorts where the beau monde of Paris spent the summer months, from Deauville to Monte Carlo. In the nineteen-twenties and thirties, they expanded into the United States. In 1939, on the brink of the Second World War, the family emigrated to America and opened shops in Palm Beach and New York.

Paris as a Centre of Art

From the eighteenth century up to the Second World War, France set the tone in Europe. Paris, as the heart of the country, was the epicentre for art, the applied arts, architecture and fashion. Paris was associated with luxury and style. Up until the outbreak of war, the city attracted artists, writers and designers like a magnet. They came from far and wide to settle in the city or spend some time there learning the tricks of their trade.

The Roaring Twenties in Paris

Paris flourished from the last quarter of the nineteenth century up to the outbreak of the First World War in 1914. La Grande Guerre, the Great War, changed everything. The war entered into with such optimism did not end until four years later, in 1918, and claimed an unprecedentedly high number of deaths among the troops. France lay in ruins and the country was utterly disillusioned. The war had a huge impact on the social and cultural developments that followed. After the First World War, people wanted just one thing: to move forward to a new, modern world and break with the old bourgeois values. People
partied non-stop in Paris to the sounds of jazz, the new music introduced into Europe by American soldiers. Artists and writers met in cafés and bars and they all had the same goal: to forget the bad years and focus on the new. Art Deco became all the rage—a style that reflected the fashionable lifestyle.

This Van Cleef & Arpels ring with its geometric pattern is typical of the style that was in fashion between the wars. Art Deco derives from the term ‘Arts Décoratives’, the decorative arts. Whereas Art Nouveau with its organic forms and natural, flowing lines was popular at the beginning of the twentieth century, the new trend, Art Deco, was the diametric opposite. It was a design idiom that was in tune with modern life: industrial, powerful, geometric, abstract and colourful. The materials were expensive and craftsmanship was paramount. The harbingers of the style had already appeared in the first decade of the twentieth century, but it did not really come into fashion until 1920 and it remained popular until 1939 and the outbreak of the Second World War.