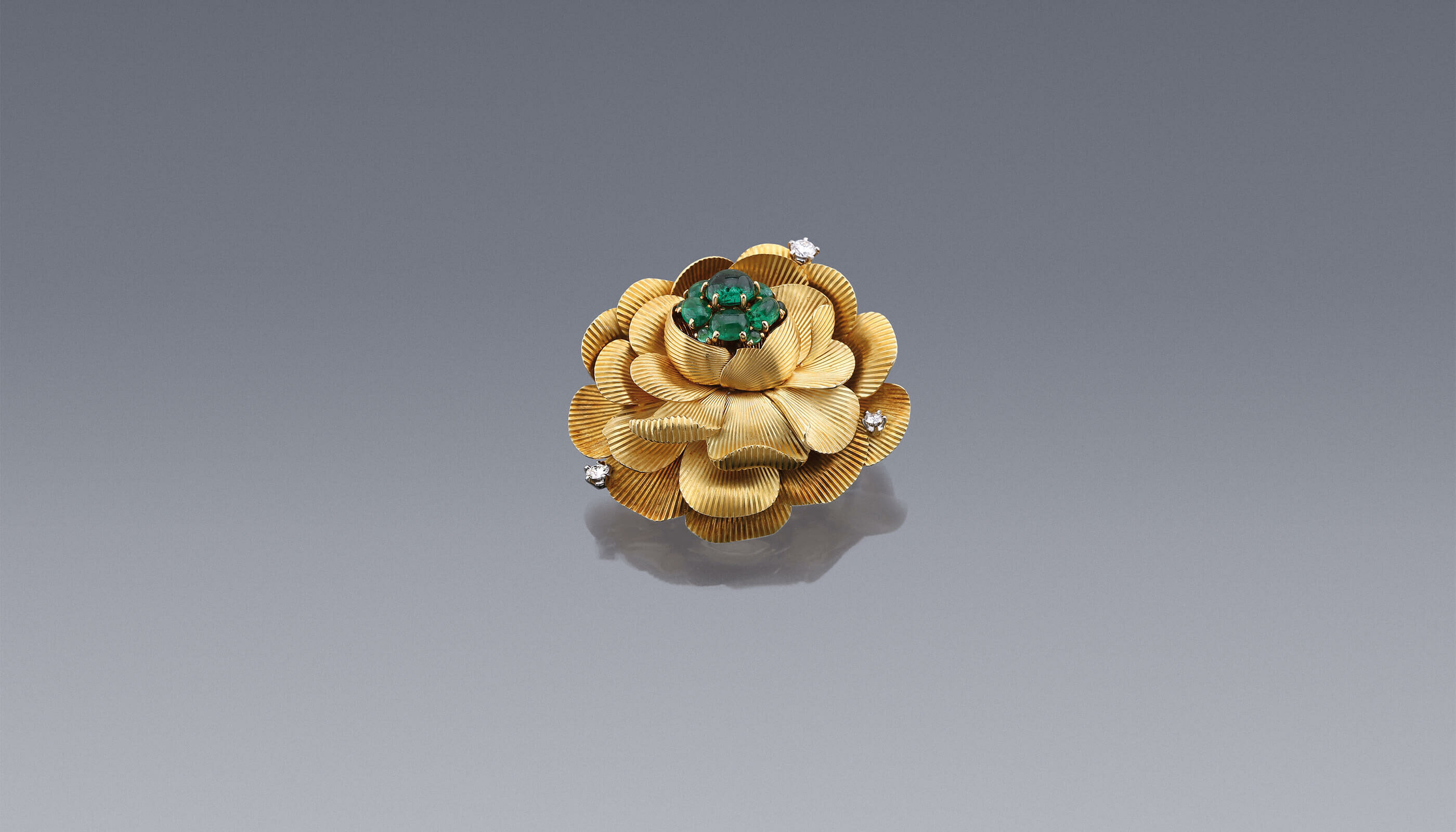 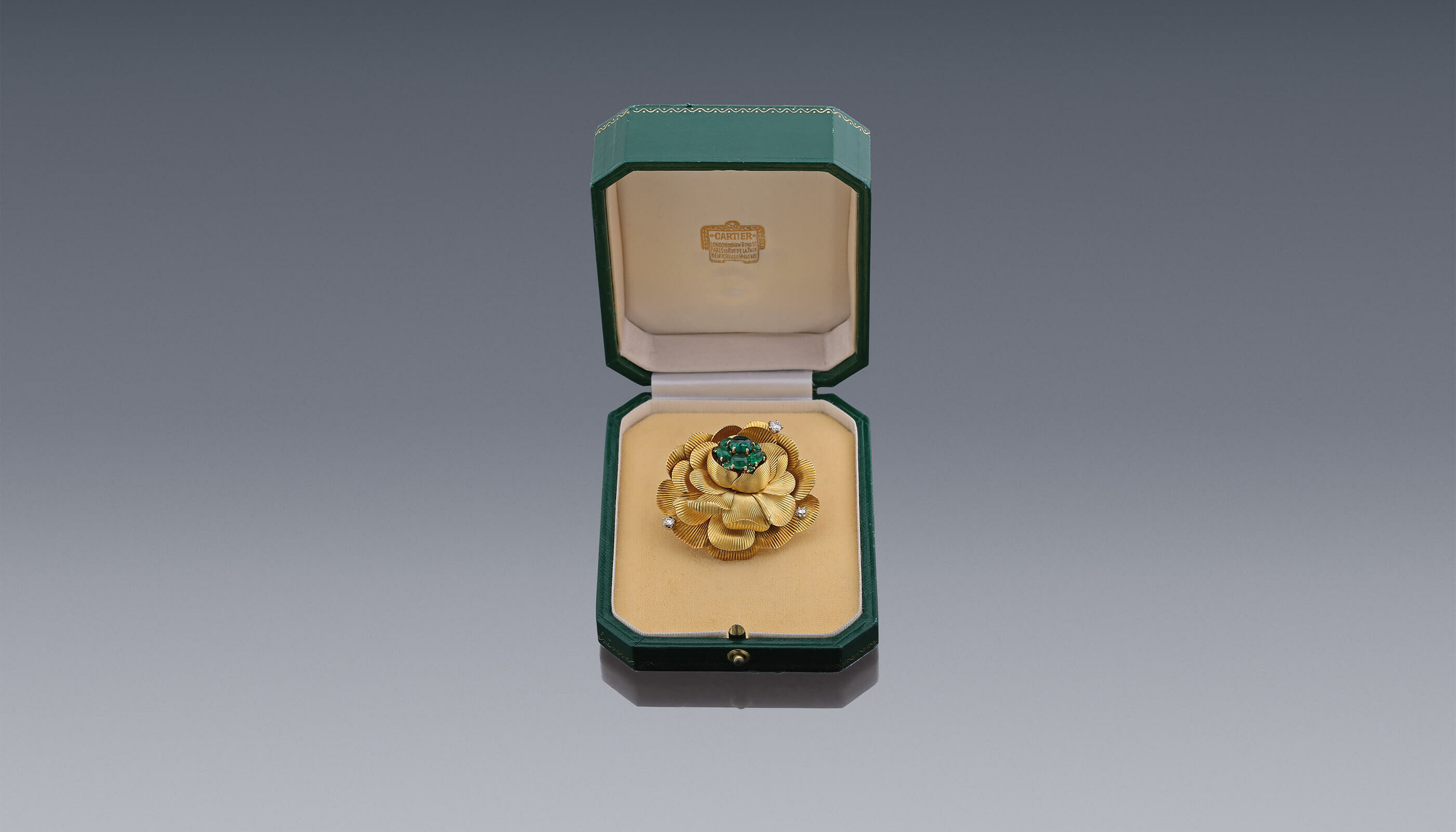 A Camellia Flower Brooch by Cartier

This stunning 18-carat gold, emerald and diamond brooch by Cartier in the shape of a camellia was made in London in the nineteen-forties. The realistic flower is built up from several layers of curling, ribbed gold petals. It is set with eleven cabochon-cut emeralds of different sizes, all of very clear quality. Three sparkling brilliant-cut diamonds are set between the outer petals.

This flower holds multiple meanings besides its inherent beauty. In Latin, the word “camellia” translates to “helper to the priest.” The flower was named after Father Georg Joseph Kamel, a Jesuit missionary, pharmacist and naturalist known for producing the first comprehensive accounts of Philippine flora and fauna in the 1600’s and for introducing Philippine nature to the European learned world.
The camellia flower symbolizes love, devotion, affection, and admiration. The flower can also symbolize refinement, perfection, and faithfulness, depending on the color and context of the bloom.

Cartier has a long tradition of using floral motifs in its jewellery. While Art Deco was in fashion, symmetrical, stylized garlands and exotic floral motifs prevailed. As the nineteen-thirties progressed, fashion changed and the depiction of flowers like lily-of-the-valley, daisies, anemones and hydrangeas became more naturalistic. The brooches and the volume of the flowers increasingly corresponded with reality. A striking feature of these pieces was the different techniques and great variety of precious and semi-precious gemstones used in them. The brooches Cartier designed from the nineteen-forties through to the sixties were worn in different ways in line with the fashion of the moment: on the shoulder, on a hat, near the waist, or suspended from a choker.

Emeralds and diamonds are the kings of precious stones. The diamond, with its clear, sparkling appearance is synonymous with wealth and can be found in all the important treasure-houses and crown jewels throughout the world. The emerald was a popular stone among rulers and maharajas of the past. There are countless legends attached to diamonds and emeralds, and some cultures attach magical or protective powers to them. In both cases, the larger the stone and the greater the clarity, the more costly it is.

Diamonds are billions of years old. They were formed by the compression of carbon at great depths in the earth’s mantle and were carried to the surface by volcanic eruptions. The word diamond derives from the Ancient Greek adamas, which means unbreakable. It is the hardest material on earth.
The word ‘emerald’ is derived (via Old French esmeraude and Middle English emeraude), from Vulgar Latin esmaralda/esmaraldus, which was borrowed via Ancient Greek (smaragdos, ‘green gem’) from a Semitic language. Emerald is a variety of the colourless mineral beryl. It owes its green colour to trace amounts of chromium or vanadium, or a combination of the two. Only emeralds of the very highest quality are transparent.

The House of Cartier

Until 1964, the jewellery house of Cartier was a true family business. It was founded in 1847 by Louis-François Cartier, who took over the workshop of his teacher, jeweller Adolphe Picard in Rue Montorgueil in Paris’s second arrondissement. A few years later he opened his first shop in Rue-Neuve-des Petit-Champs, but swiftly moved to the Boulevard des Italiens. He trained his son Alfred in the business and handed over the management of the firm to him in 1874. In 1899, Alfred moved the business to the chic Rue de la Paix, the centre of the Parisian fashion and luxury industry. Cartier is still at this address.

At the fin de siècle, Edward, Prince of Wales, and his entourage were among Cartier’s most important clients, frequently visiting the shop in Rue de la Paix. The prince described the house as ‘the jewellers of the king, and the kings of jewellers’. When the prince ascended the British throne as King Edward VII in 1901, it was no longer possible for him to make regular trips to Paris, so he suggested that Cartier should open a branch in London. Cartier already had plans to expand internationally and the first London boutique was opened in Burlington Street in the run-up to the coronation in 1902. London was the capital not just of the United Kingdom but of a vast Empire. Wealthy connections from India, the Orient and Asia, as well as Americans, preferred to come to London rather than Paris at that time. The business flourished under the management of Pierre Camille Cartier, Alfred’s second son. At one point the results were actually better than in the headquarters in Paris. In 1909 the shop moved to 175-177 New Bond Street, where it remains. In 1922 the shop was extended to create its own design studio and workshop, where this brooch was designed and made.