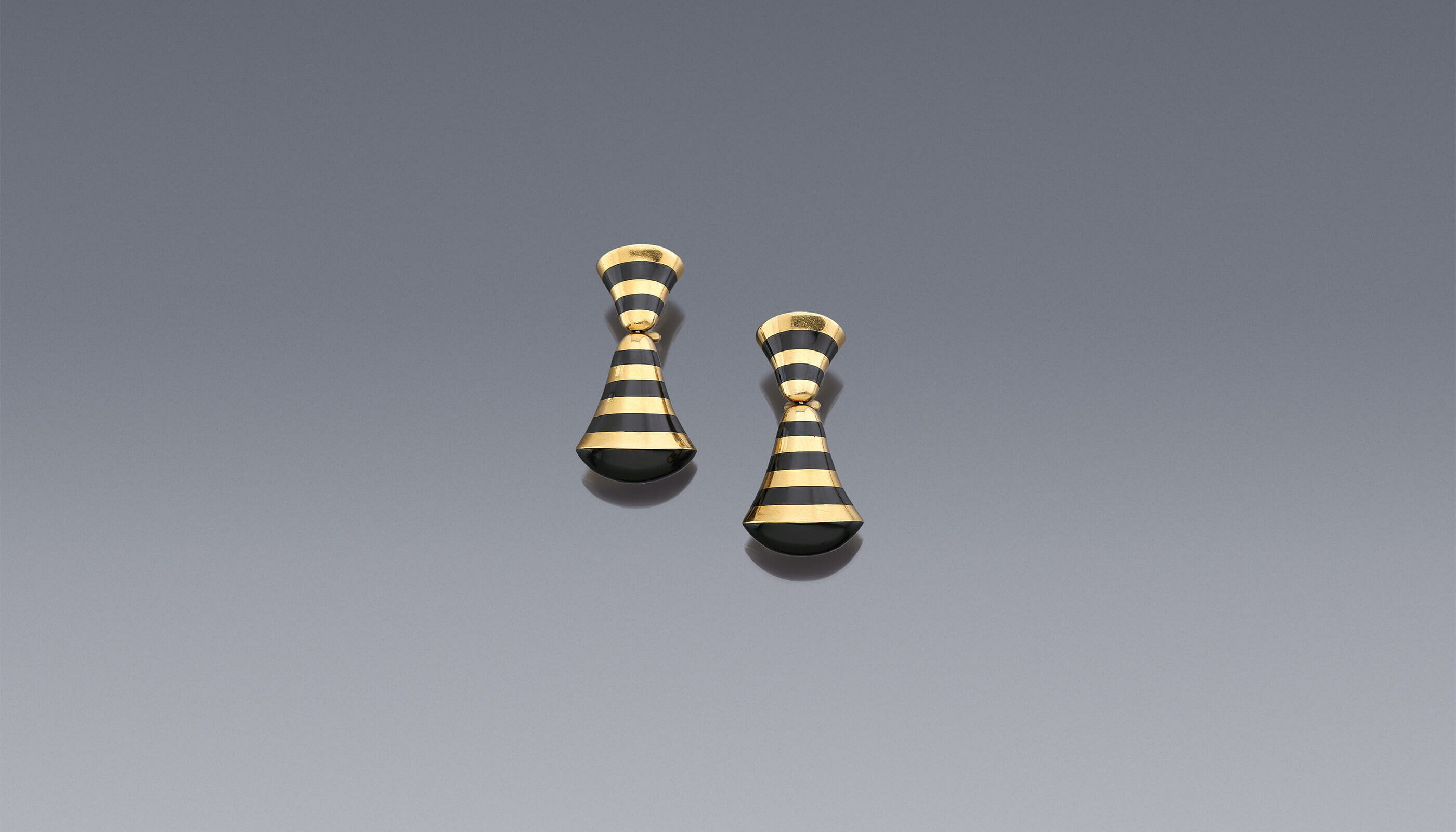 These amazing Egyptian Revival earrings were made by Angela Cummings in the nineteen-seventies. They are beautifully executed in 18-carat gold and black enamel. The clip-on earrings are composed of two bell-shaped elements. The upper part, which is smaller and mounted upside down relative to the lower, is attached with gold wire to the larger lower element. Stripes of black enamel and gold alternate seamlessly. The free elements can move, giving the earrings a graceful effect.

Enamel is a durable decorative layer made by fusing powdered glass to a metal or earthenware substrate by firing. The word enamel comes from the Old High German word smelzan (to smelt) via the Old French esmail. The technique was first used by the Ancient Egyptians.

With its colossal tombs, mummies, sculptures and fascinating images and hieroglyphs on tablets and papyrus scrolls, Ancient Egypt at the time of the Pharaohs captures the imagination. Every time in history Western archaeologists made new discoveries since the Renaissance in the sixteenth century, the Egyptian style has enjoyed a revival. The expeditions and excavations during the Napoleonic era at the beginning of the nineteenth century left an indelible mark on architecture and the decorative arts.

In 1922, the English archaeologist Howard Carter made a spectacular find when he opened the tomb of the pharaoh Tutankhamun. A veritable treasure house containing more than 3,500 artefacts, it was almost completely intact. The highlight of the collection was a magnificent gold death mask inlaid with bands of blue enamel and gold, and set with precious stones. The find had an immediate impact on the Art Deco movement in the nineteen-twenties, and on the decorative arts in the nineteen-sixties and seventies, when the objects normally held in the Archaeological Museum in Cairo went on a world tour. Tutankhamun Treasures was the very first blockbuster exhibition. Millions of visitors in North America and Europe queued for hours to see the treasures and there was a new Tut mania. Cummings, who most probably saw the exhibition, took inspiration from it and interpreted it in a very individual manner with these Egyptian-style earrings.

Angela Cummings was born Angela Baeumker in Klagenfurt, Austria, in 1944. Her mother was a doctor and her father was a scholar and diplomat. When she was three, her family moved to the United States and she grew up near Washington D.C. When she was twelve, the family moved back to Europe and settled in Bonn. Cummings wanted to be a painter and studied at the Accademia di Belli Arti in Perugia, but changed course and in 1967 continued her training as a gemmologist, goldsmith and designer at the Staatliche Zeichenakademie in Hanau. After graduating, she moved to New York, where at the age of twenty-three she was immediately taken on by Tiffany & Co, working under the guidance of Donald Claflin as a designer. At first, she assisted Claflin with research and the design of his collections. In 1970 she married her colleague Bruce Cummings, whose name she took. In 1975 she designed her first solo line, Angela Cummings Exclusively for Tiffany & Co.
Together with Paloma Picasso, Jean Schlumberger and Elsa Peretti, she was one of Tiffany’s best-known and most popular jewellery designers. Cummings is known for her innovative use of trompe l’oeil effects, intricate designs, empathy with the material and tiny details. She became famous for her designs featuring inlaid semi-precious gems like black jade, mother of pearl, coral, wood and lapis-lazuli, achieving a perfect fusion of age-old craftsmanship and contemporary design. The techniques she used are very complex and time-consuming, reflecting the beauty Cummings finds in nature and in sculpture. In 1984, after sixteen years, she and her husband left Tiffany & Co to start their own company.

Marked Angela Cummings and 750, the US mark for 18 carat gold on the back.