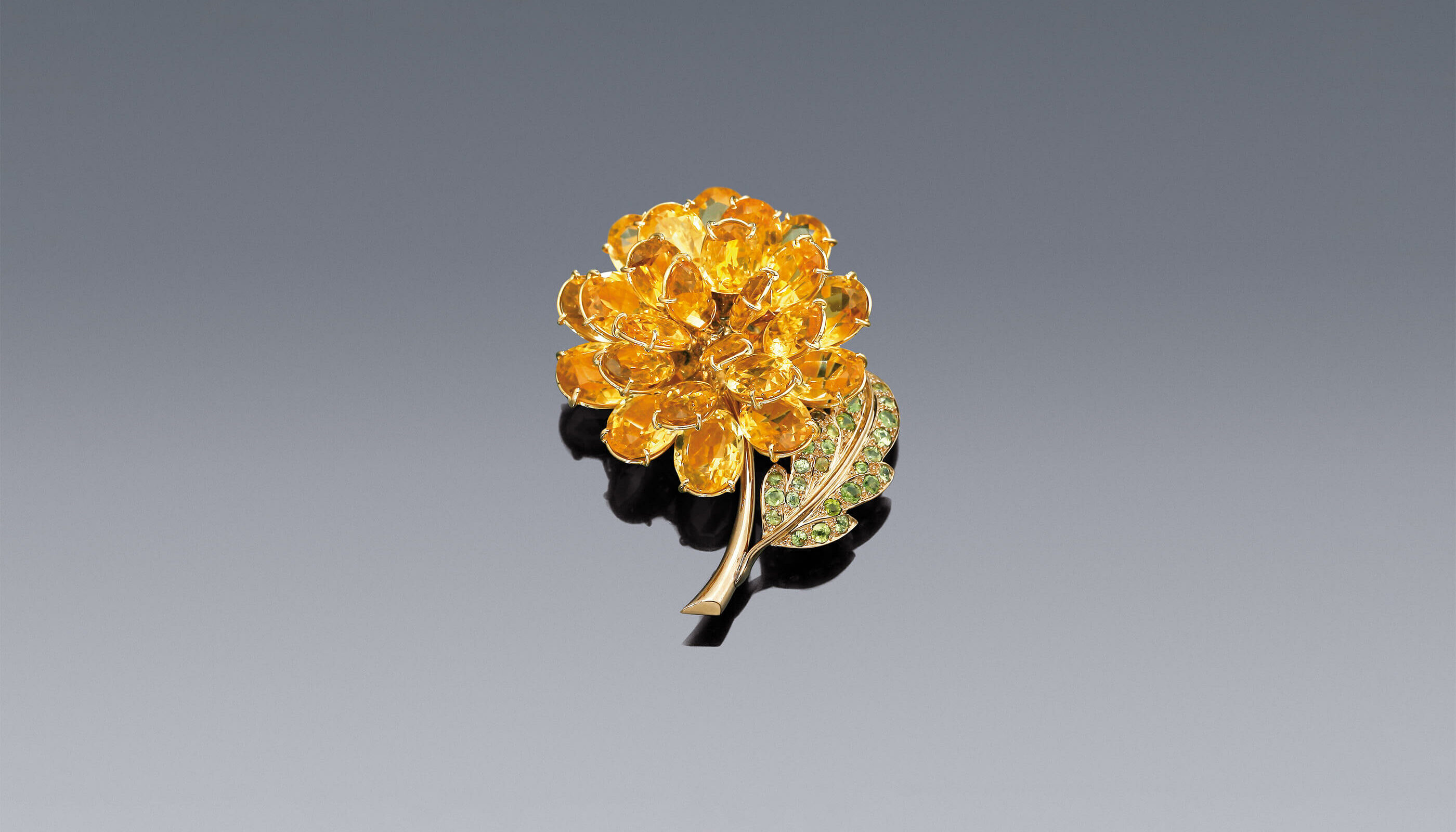 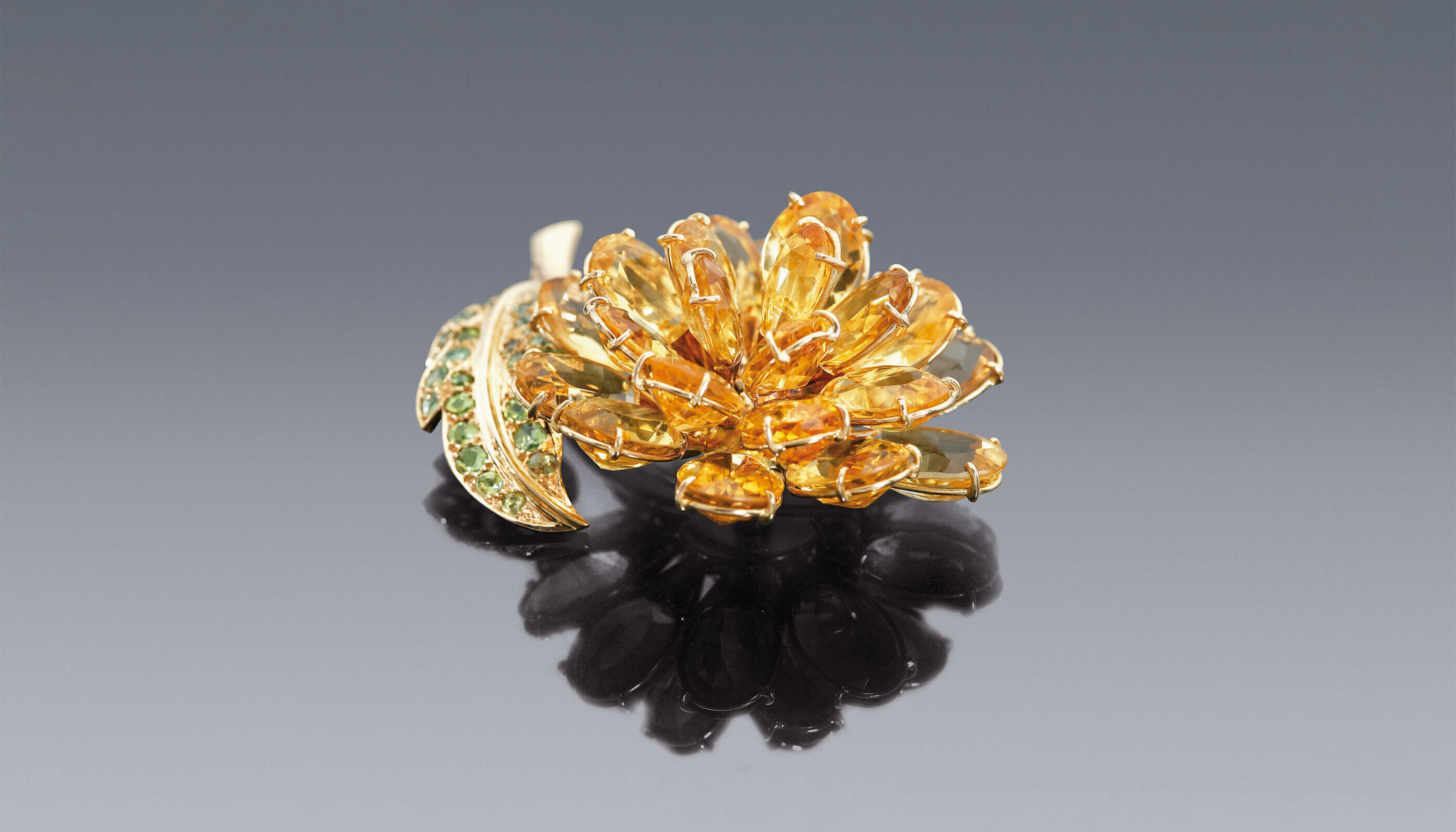 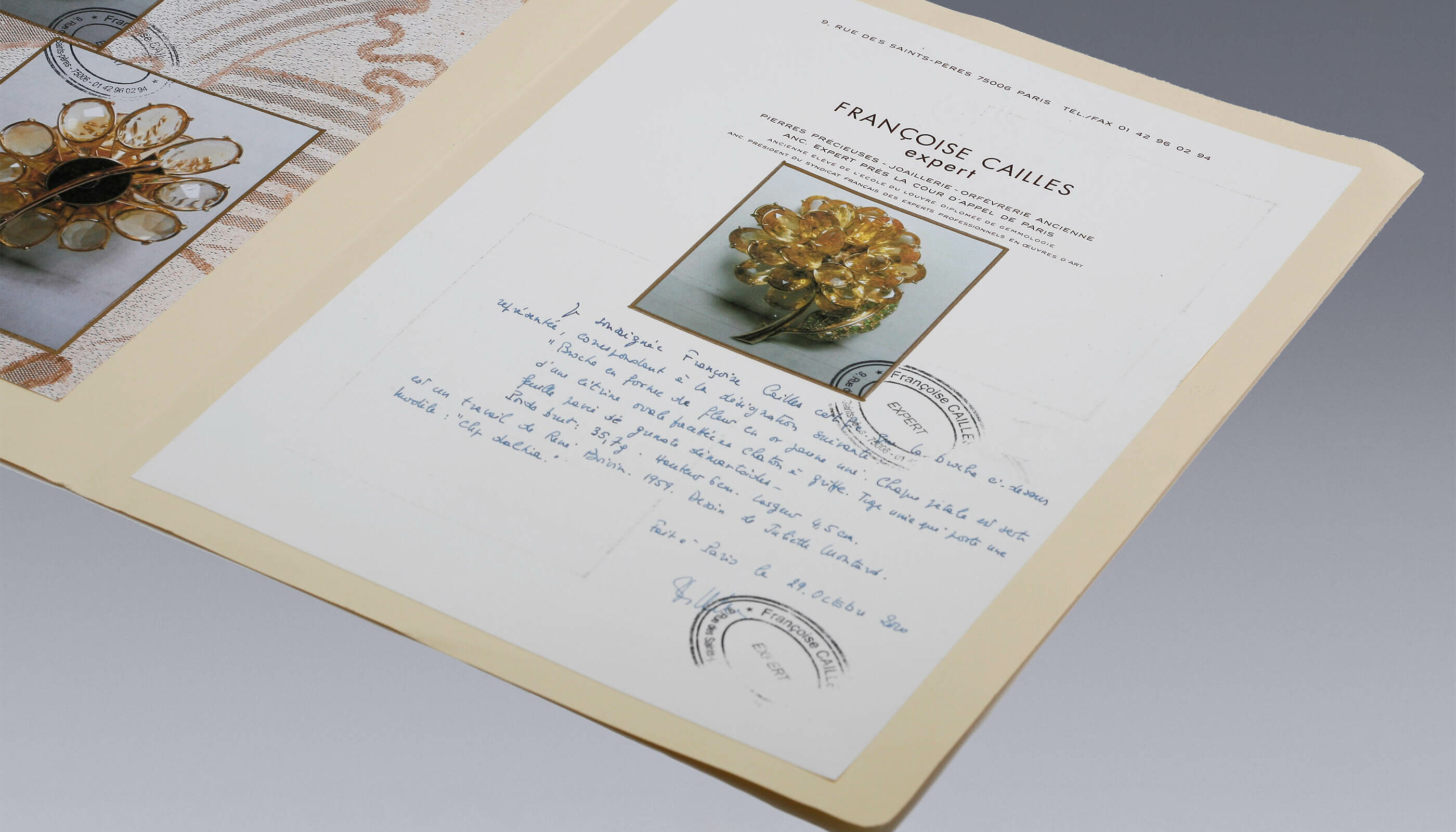 A Dahlia Brooch by Boivin

This magnificent Dahlia brooch was made by the jewellers René Boivin in Paris in 1959. It was designed by Juliette Moutarde, the chief designer for the house at that time, and is made of eighteen-carat yellow gold, demantoid garnets and citrines. Each petal of this flower is formed by an oval faceted citrine. The 24 citrines are mounted so that they overlap, each in its own gold setting, to create a three-dimensional jewel in which the light is beautifully reflected in the stones. The leaf and stem are set with 28 demantoid garnets. Only a few pieces were made to this design.

The French firm of Boivin is considered to have produced some of the most original and finely wrought jewels of the twentieth century. The firm was founded during the 1890s by René Boivin (1864-1917). A few years later he married Jeanne Poirot, sister of the famed couturier Paul Poirot. Word of mouth established the firm’s reputation for faultlessly manufactured pieces of artful beauty. In Rue de Turbigo they manufactured designs for such well-known jewellers as Mellerio and Boucheron. René Boivin was especially drawn to naturalism. However, the firm of Boivin did not follow the Art Nouveau movement which was all the rage at the turn of the century. Instead, they came to specialize in more unconventional designs that were appreciated by a discerning clientele some of whom René and Jeanne met while attending Paul Poiret’s lavish parties.
By 1905 Boivin had virtually stopped supplying other jewellery houses and instead focused exclusively on private clients. René Boivin died prematurely in 1917 at the age of 53, when the business and his reputation for creating beautiful and desirable pieces were at their height.

Jeanne Boivin decided to continue the firm. In a resolutely male dominated industry, no woman had ever before been at the head of an important jewellery firm. Madame René Boivin gradually began to create her own distinctive pieces. Although not a designer herself, she worked with trusted and accomplished craftsman such as Davière, her master jeweller, and the exceptionally talented lapidary, Adrien Louart. The house of Boivin produced unique geometrical and sculptural pieces innovating the combination of wood, rock crystal and hard stones with diamonds and coloured gems such as lapis, citrine, peridot, amethyst and tourmalines. Boivin jewels attracted a wealthy and distinguished private clientele.
The firm moved to a new salon in 1931 on in Avenue de l'Opera and remained known only by referral. Madame Boivin had no interest in operating a retail concern, believing that her firm’s reputation for finely made and original jewels would attract sufficient business. Also notable was her reluctance to sign pieces. She was of the opinion that a beautiful piece of jewellery spoke for itself and to sign it would be pure affectation. While most of their output was thus left unsigned there were certainly exceptions, particularly when requested by a client.

In the 1930s Boivin began to produce bold pieces with rounded silhouettes, favouring spherical and elliptical forms. More naturalistic designs were also produced, featuring animals of all varieties including sea creatures and, once again, delicately and realistically rendered floral designs. This period also marked a change in Boivin's main designer. When Jeanne Boivin first took over the firm in 1917, one of her first decisions was to hire a then unknown salesgirl, Suzanne Vuillarme. Under her married name of Belperron, she would establish herself as one of the most talented and collected jewellery designers of the twentieth century. She remained at the firm until 1931, when she decided to start creating her own pieces. Juliette Moutarde, who replaced Suzanne, would remain with the firm until her retirement in 1970. She had trained as a jewellery designer and developed a close working relationship with Jeanne Boivin. Germaine Boivin joined the firm a few years later in 1938 as a designer and continued to run the firm after her mother's death in 1959. In 1976 she sold the firm to Jacques Bernard, a Boivin designer who had joined the firm in 1964 and who continued to produce pieces in the Boivin tradition. The firm was sold to the Asprey Group in 1991 and, some time later, it was decided to close the house of René Boivin.

With certificate of authenticity by Françoise Cailles, Paris, 29 0ctober 2000.