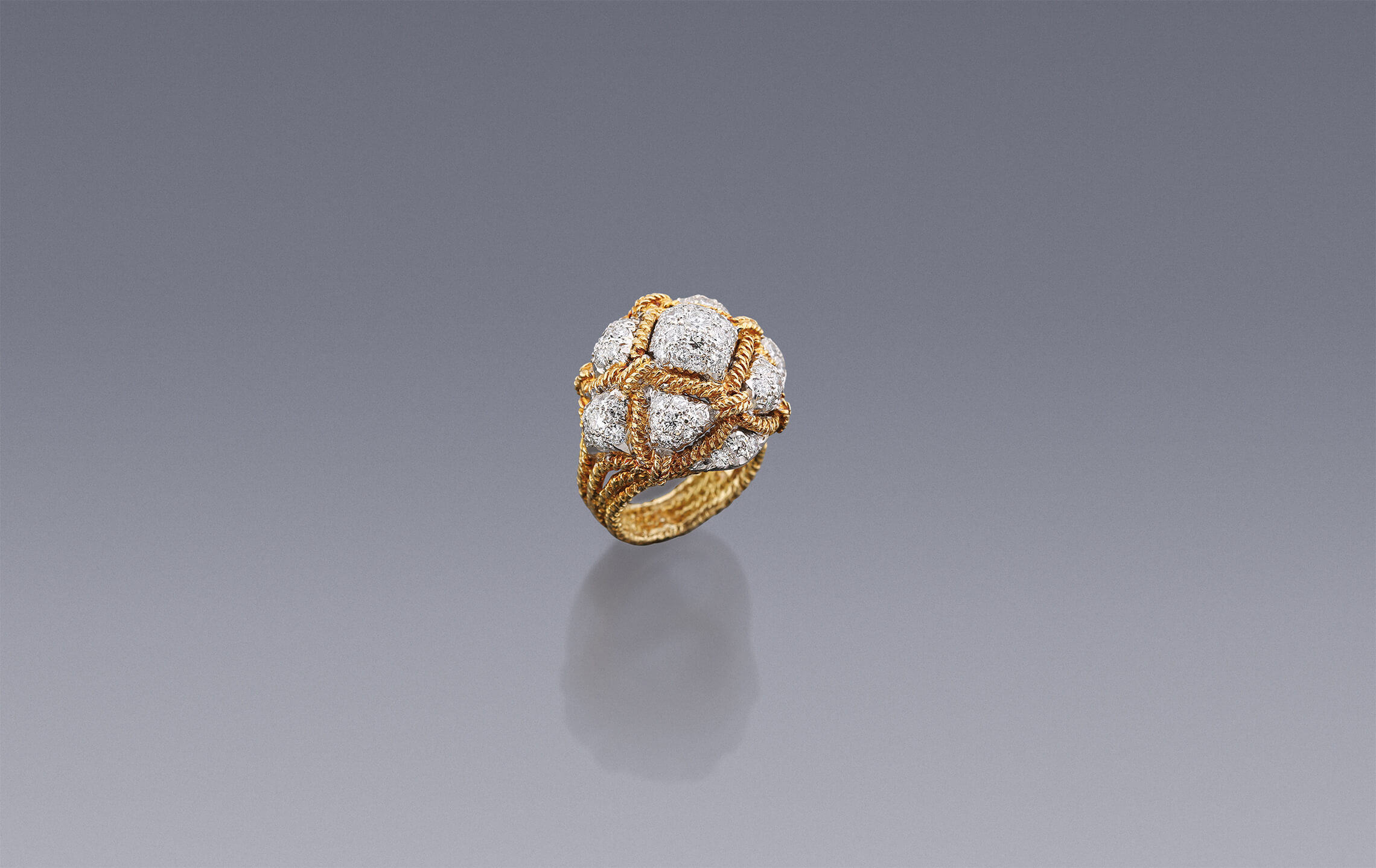 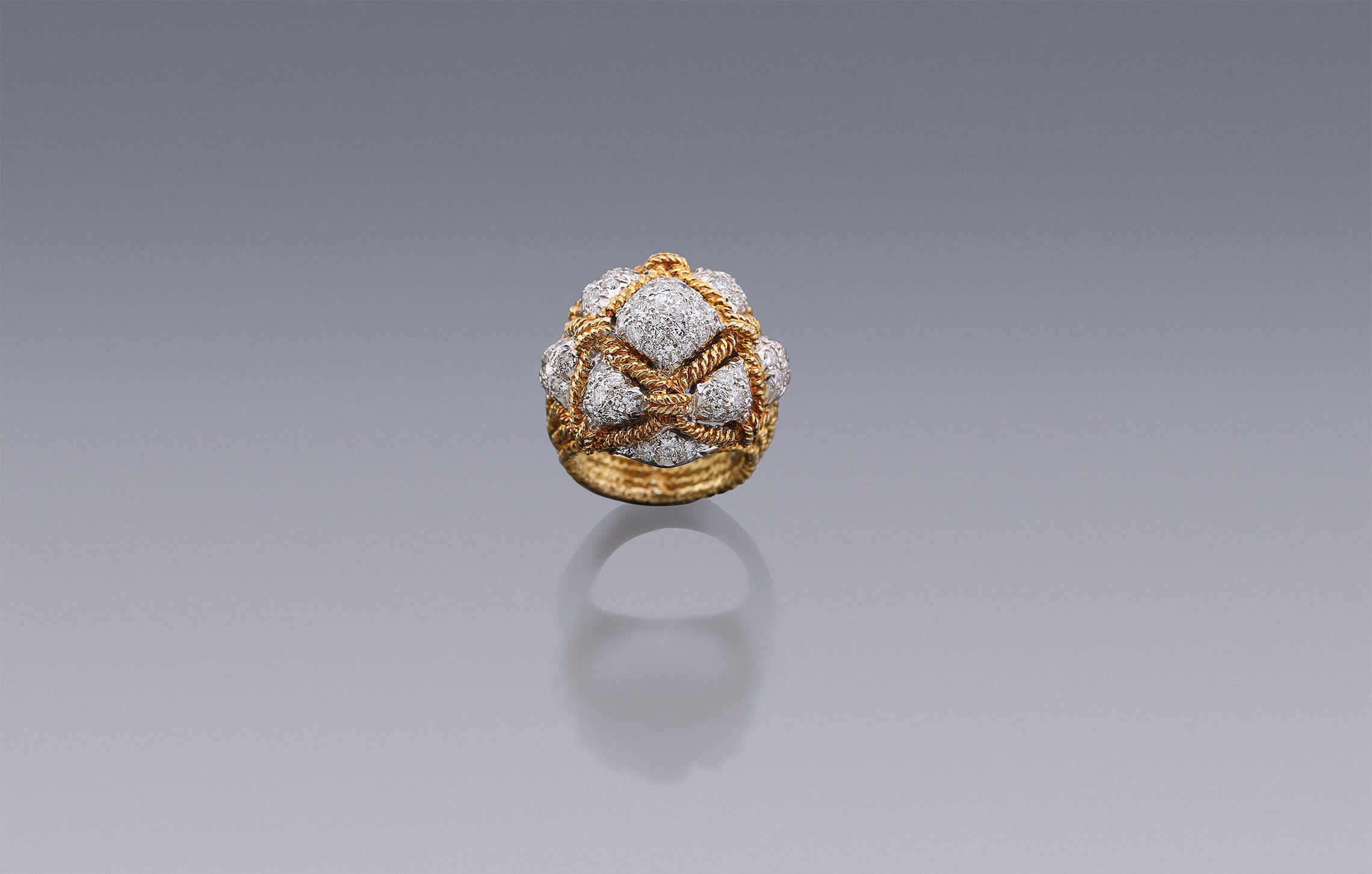 A Diamond and Gold Cocktail Ring by Hammerman

This striking ring was made in the 1960’s by Hammerman Brothers, a famous New York jeweller. The festive ring is made up of domed clusters of pavé set diamonds, placed in a geometric net of woven gold cables. The brilliant cut diamonds are set in white gold and are of a beautiful quality. The ring is a wonderful example of American 60’s jewellery.

A cocktail ring is a large, flamboyant, festive ring. Originally these rings were set with a large, expensive central stone, often set off by a surround of diamonds. These cocktail rings first appeared in the ‘roaring twenties’, a time of huge political unrest, social change and economic growth in America. The rise of the cocktail ring reflects all three aspects. Firstly, social change, particularly with regard to the position of women. While the men fought at the front during the First World War, the women went out to work. After the war, they had no intention of relinquishing this position. The fiercely fought for women’s right to vote was at last introduced in America. Thanks to the great economic boom after the war, working and independent women had a lot of money to spend. The rich, emancipated suffragettes held receptions in the late afternoon or early evening—cocktail parties. Dressed to the nines in chic cocktail dresses the ladies went to these parties and wore striking jewellery, including the often sleek, geometric cocktail ring designs.

The American Way of Life

Cocktail party, cocktail dress and cocktail ring— the terms all derive from the cocktail, a mixed alcoholic beverage that became extremely popular in America during the prohibition era of the nineteen-twenties, when alcoholic beverages were banned. The often poor quality and taste of the alcohol could be camouflaged and made more palatable with the addition of soda, sweeteners, fruit and mint. As well as at illegal cocktail parties at home, people also drank in illegal establishments known as speakeasies. Although prohibition had been introduced to combat alcoholism, it actually had the opposite effect: alcohol smuggling flourished, alcohol-related crime escalated and people—men and women alike—drank more than ever. After prohibition was abolished in the nineteen-thirties, the cocktail became synonymous with the American way of life.

In the nineteen-forties and fifties, cocktail rings became more and more flamboyant and their popularity rose, boosted by the glitter and glamour of Hollywood. In the fifties and sixties, the cocktail ring was part of every woman’s standard outfit for an evening out. Large precious stones became scarcer, however, and people had less to spend on diamonds and platinum. Smaller amounts of gold were cunningly wrought to look heavier and larger and the earlier sleek designs were replaced by organic, sculptural forms. This sculptural domed ring by the Hammerman Brothers is typical of this period: a ring with which a woman could make an unmistakable statement.

The maker of this ring, Hammerman Brothers, is an American jeweller founded by Benjamin, Hyman and Bernard Hammerman. Before the Second World War, the three brothers worked in the Bowery, New York’s diamond quarter. After the war, they struck out on their own, opening their own business in 1946. They built a reputation on making high-quality jewels in eighteen-carat gold and platinum, set with glittering gemstones, and luxury watches in the shape of diamond bracelets. The brothers were formidable businessmen and soon expanded their empire to include a diamond dealership and a jewellery foundry, so that they could produce their designs inhouse. They grew to become one of the largest American jewellery houses, supplying pieces to jewellers and clients in America, Europe and the Middle East. Nowadays the company is still family-run and their jewellery is still made in-house.

Marked with the Hammerman Brothers’ maker’s mark, HB ligated, the number 48 and 18K for eighteen-carat gold.