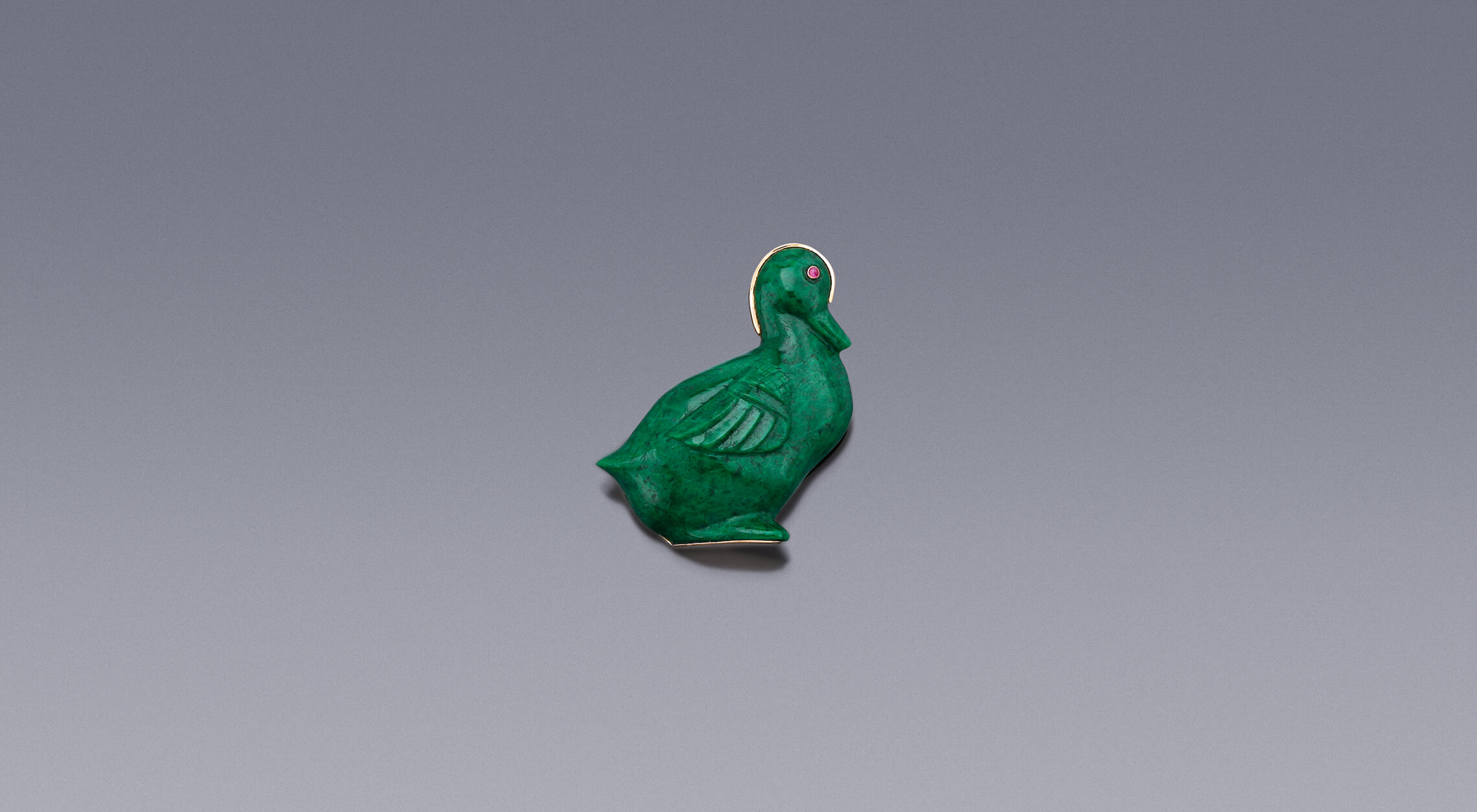 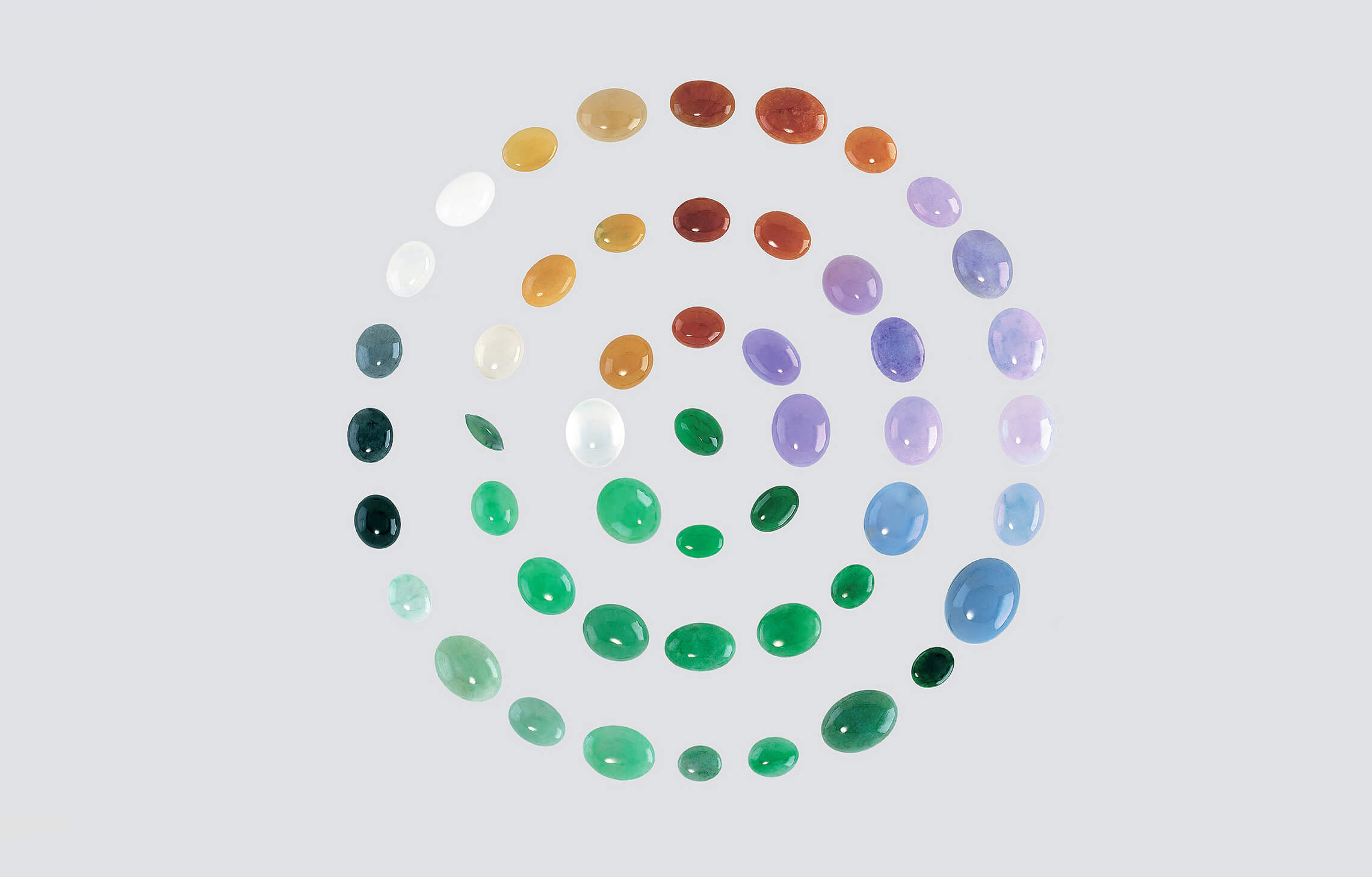 This delightful brooch in the shape of a duck was made around 1980 by Mellerio of Paris, the famous, two-hundred-year-old firm of jewellers. The duck is made of carved jadeite jade in a beautiful green colour, set in eighteen-carat gold. The eye is set with a cabochon cut ruby.

Mellerio, or in full Mellerio dits Meller is the oldest firm of jewellers in Europe and still active today.  An unbroken line of fifteen generations has led the firm in Paris since 1613.  Around 1780 the family firm acquired a royal client who was to prove crucial to their subsequent success. The story has it that the then fifteen-year-old Jean-Baptiste Mellerio stationed himself beside one of the entrances to the Palace of Versailles with his father’s wares. One of Marie-Antoinette’s ladies-in-waiting was enchanted by his jewellery; she told the queen, who was delighted with it too. Ever since, the firm has supplied jewels to many royal houses including the Dutch royal family. William III made his largest and most expensive purchase in 1888. For the sum of 160,000 florins he bought the ruby and diamond parure that has become world-renowned as the Mellerio parure.  It was a Christmas gift for his wife, Queen Emma, in 1888.  Queen Máxima of the Netherlands—then still princess—wore the tiara at the celebration of King Carl Gustaf of Sweden’s sixtieth birthday in 2006.

Like many of the great jewellers, the firm often contracted out the making of the pieces to small outside workshops. Mellerio only worked with the finest craftsmen, several of whom went on to become important figures in the world of jewellery, among them René Lalique, Boivin, Oscar Massin, Alex Falize, Castellani and Boucheron.

Throughout the nineteenth century Mellerio dits Meller took part in various trend-setting exhibitions in London, Paris and Vienna. It was a century of recognition for the firm, which won several awards. The firm was renowned for its ‘transformable’ jewels—pieces that could be worn in a number of different ways. The firm continued on this path in the twentieth century, participating in, among others, the Expositions des Arts Décoratifs in Paris in 1925 and the World’s Fair in New York in 1939. François Mellerio (born 1943) and Olivier Mellerio (born 1945), Mellerio’s present managers, maintain the firm’s policy of producing outstanding quality and innovative design.

Jade is an ornamental mineral known primarily for its green varieties. In fact, however, jade is a collective term for different minerals. Jade is indeed usually green, but it can also be grey, black, red, purple, pink, lavender, white, yellow or brown. It was only in the second half of the nineteenth century that it was established that what had always been regarded as jade were actually two different minerals: jadeite and nephrite. Soon after this, chloromelanite (moss green to greenish black) and jade albite (light green) were discovered. In 1963 there followed another discovery of a jadeite stone, named Maw-sit-sit after a local village. Only jadeite jade and nephrite jade are considered to be true jade. Jadeite is by far the more expensive of the two, but nephrite has been in use for much longer.

Every colour of jade can be attractive, but jadeite’s most desirable colour is, in fact, a very specific shade of green. This finest-quality jadeite—an almost transparent vibrant emerald green—is known as Imperial jade. The royal court of China once had a standing order for all available material of this kind, and it is one of the world’s most expensive gems. The green that can command millions in the marketplace is pure and penetrating, a vivid hue with no hint of grey that looks intense even from a distance. It ranges from pure green to a slightly bluish green or a slightly yellowish green. This jade usually comes from Myanmar (formerly Burma). Lavender is the next most valuable colour. Intense colours command a substantial premium over lighter and weaker ones. Black jade is also popular, along with orange to reddish jade, especially when these colours are not brownish.
The jade used for this brooch is semi-transparent in a very intense, deep green- spinache green - that is also highly prized.

In the Early Stone Age (around 11,000 BC) nephrite jade was a highly desirable material for making weapons and tools like knives and axes. In Chinese culture, jadeite and particularly nephrite were used for utensils and ritual objects as early as 9000 BC. Green stones were highly prized in China, particularly if they were the typical green of jade or aventurine. They were called yü. Yü brought its owner good health, a long life and, above all, prosperity. Yü was the emperor’s stone and as such the symbol of the state and of power. The imperial seal was made of yü. In China, emerald green yü was more valuable than gold, so its use was initially the preserve of the highest-ranking dignitaries. By rubbing the stone every day, the owner would prosper. Jade was also given to the dead to ensure a happy stay in the afterlife. Small objects or amulets were often laid on the face or breast of the deceased.
Green jade also stood for luck, prosperity, a long life and immortality in the great kingdoms of the Mayas (AD 300-900) and the Aztecs (1200-1500) in Central America. There, too, grave gifts of green stones were given to the dead.

Only mandarin ducks are monogamous. A pair mates for life and in China the mandarin duck is a symbol of a happy marriage and fidelity. The duck also stands for motherhood, grace and comfort, protection, well-being, emotional peace and following instinct

Signed Mellerio and numbered 1068.
Marked with the eagle, the French hallmark for eighteen-carat gold.
Accompanied by GIA report no. 1176347572, dated October 2015, stating that the jade is jadeite jade, semi-translucent green, of natural colour and no indications of impregnation.