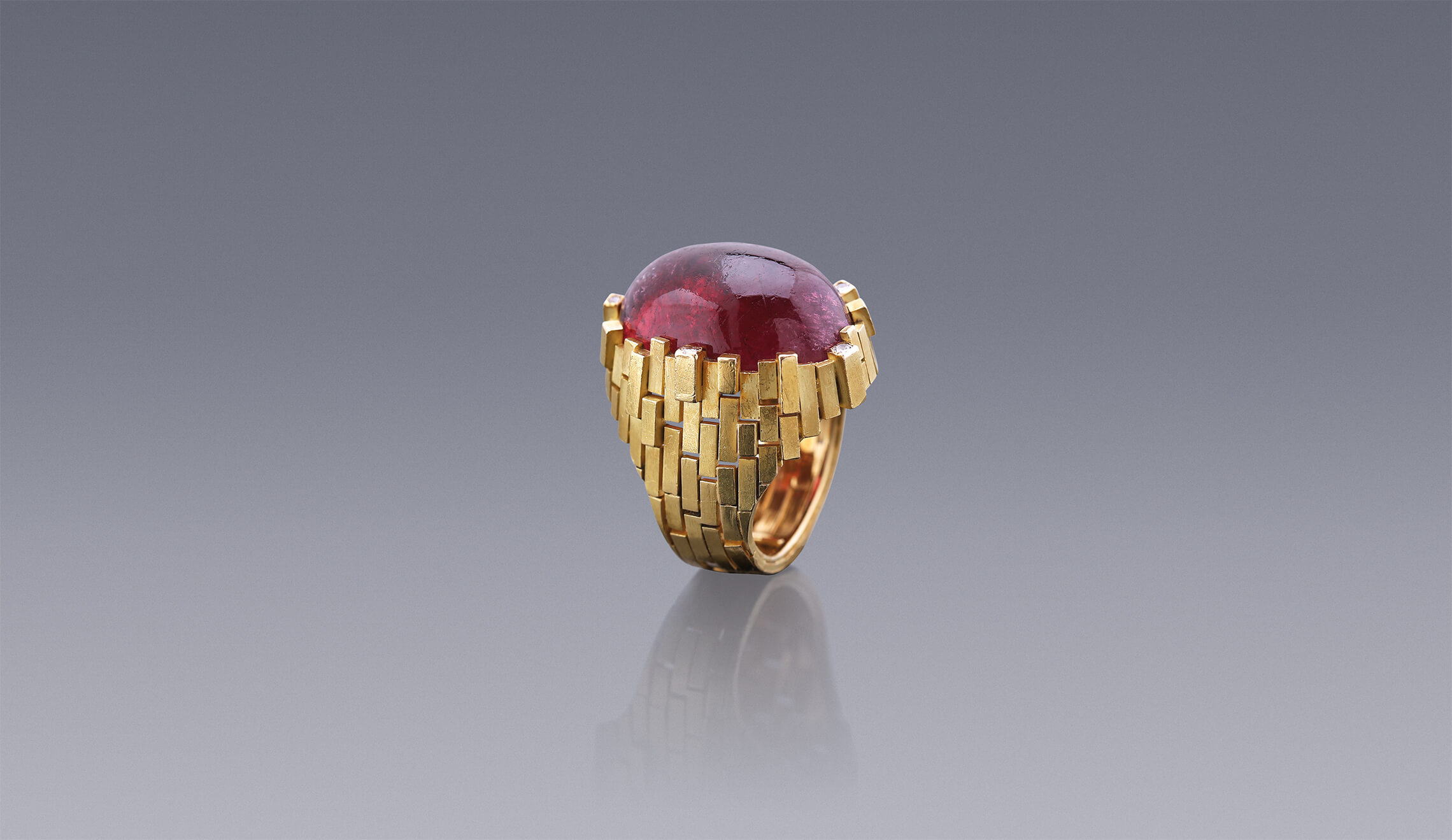 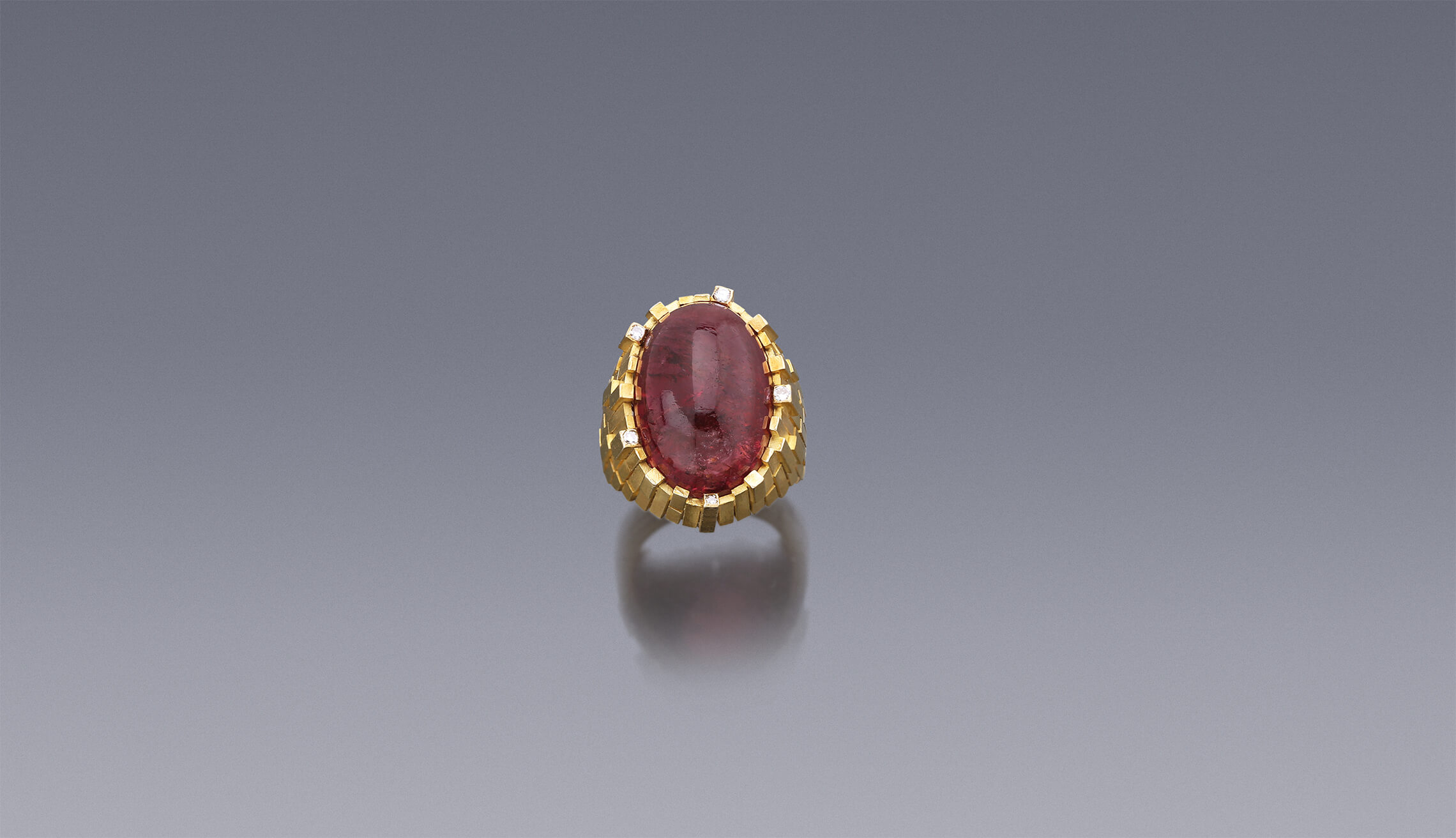 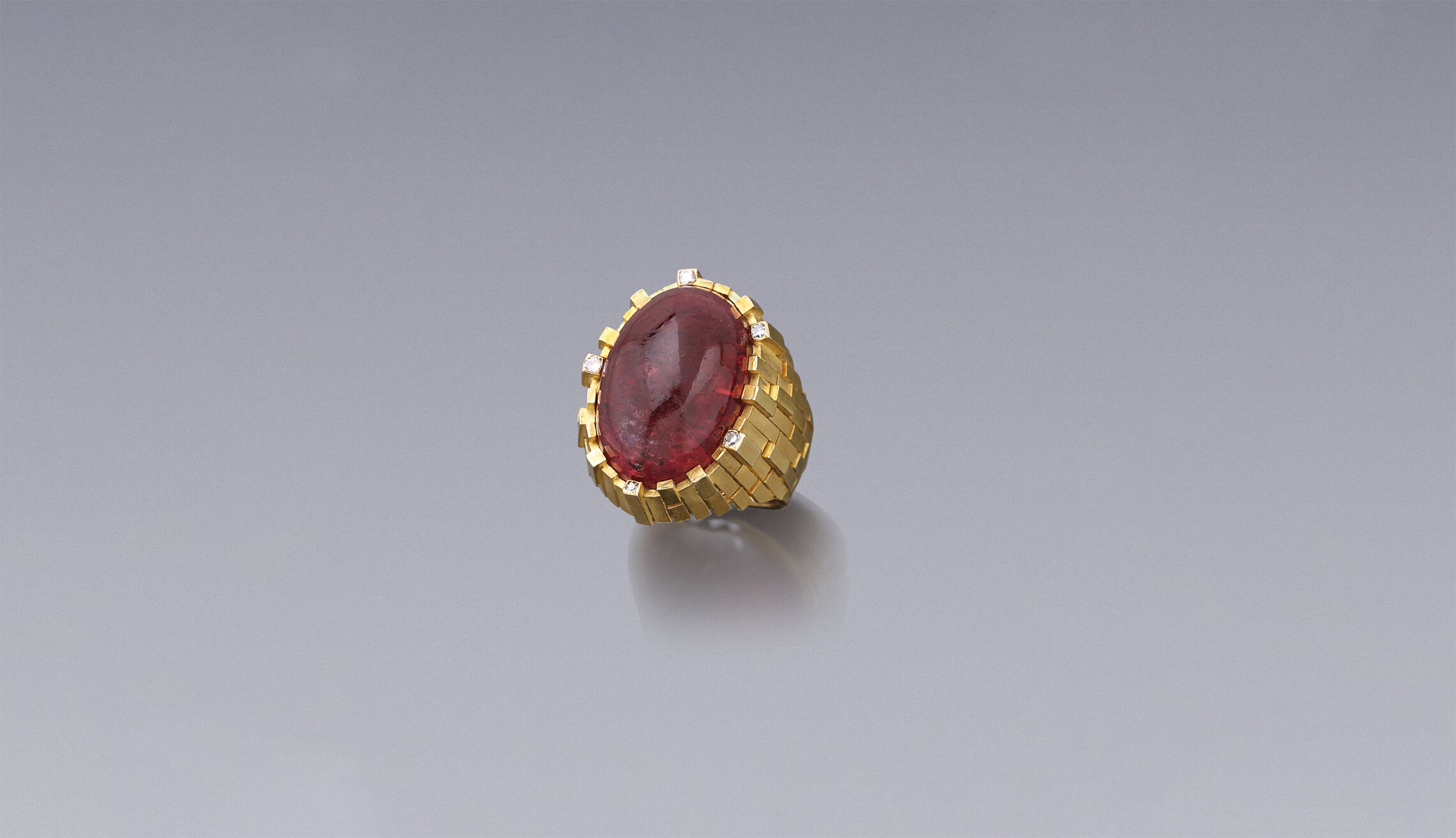 A Marvellous Modernist Ring by Grima

This magnificent gold ring with a large oval cabochon-cut pink tourmaline of around 27 carats was designed by one of the greatest modernist jewellery designers, Andrew Grima. The hand-made eighteen-carat gold setting is constructed in Grima’s characteristic ‘brick technique’ in which individual gold bricks are used to build up the shank of the ring. The setting is finished with brilliant-cut diamonds. Designer Andrew Grima is regarded as one of the most influential post-war designers in Britain. His jewels feature large, colourful stones, often in the original rough state. Fire opals, agates, rutile quartz and—as in this ring— tourmalines were set off with more traditional precious stones like diamonds and sapphires. The gold settings range from asymmetrical and angular to rounded and naturalistic.

Grima, the son of a Maltese father and Italian mother, was born in Rome in 1921. The family moved to London while he was still a child, and he attended St Joseph’s College. He subsequently studied mechanical engineering at what is now the University of Nottingham. During the Second World War he served as an engineer in the British Army in Burma. On his return he wanted to pursue his passion for drawing and painting, but when he found that most art colleges were still closed, he enrolled on a secretarial course. The only man in a class full of women, he met Helène Haller, his future wife. Helène’s adoptive father, Franz Haller, had a jewellery firm, H.J. Company, and Grima started to work in the accounts department in 1946. Two years later, when travelling salesmen called in with a case full of Brazilian stones—aquamarines, citrines, tourmalines, rough amethysts—he persuaded his father-in-law to buy the whole lot.

Unhindered by any professional knowledge, but with a love of art and his skill as a technical draughtsman, Grima took the stones and designed pieces in a wholly individual and modern, very innovative style. After his fatherin-law’s death in 1951 he sold the business on the condition that he would stay on as designer. When he was asked to make designs based on models by sculptors for an exhibition of modern jewellery staged by the Worshipful Company of Goldsmiths in 1961, it was a breakthrough. His works were shown alongside designs by celebrated artists including Pablo Picasso, Salvador Dalí, Henry Moore and Alexander Calder. The exhibition was a great success and boosted his reputation. Grima offered some of his works to Graham Hughes, the curator of the exhibition, who introduced him to potential clients.

Grima found his most important client himself, however. When he read in a magazine that society figure and photographer Lord Snowdon was complaining that he could not find any exciting jewellery in London, he invited him to tour his workshop. It was the start of a lifelong friendship. Snowdon chose several pieces for his then wife Princess Margaret, whereupon Prince Philip acquired a brooch of reused rubies for Queen Elizabeth from Grima. The Queen commissioned Grima to make jewellery that was used as official gifts—the royal seal of approval.

In 1966 Grima opened a gallery in the exclusive Jermyn Street, which he designed and fitted out with his two architect brothers. The whole London jet set was queuing up for his designs. Grima was the foremost jeweller in London’s West End in the swinging sixties and seventies. He won many important prizes and expanded his empire with shops in New York, Sydney, Tokyo and Zurich; Jackie Onassis and many film stars joined the British royals among his clientele. Grima was at least as colourful as his jewels. He drove an Aston Martin, his designs were used in an advertising campaign for Canada Dry and he became more famous than many of his clients. Grima died in 2007, but the business was continued by his second wife, JoJo, and their daughter, Francesca. His jewels are still highly sought-after.

Although tourmaline was known in the Mediterranean region in Antiquity, the stone was not introduced into Western Europe until 1703, when the Dutch imported it from Sri Lanka. On their voyages to the East and particularly Ceylon (Sri Lanka), the merchantmen of the Dutch East India Company brought back ivory and gemstones as well as spices. They called the new stone by a name derived from a Singhalese word ‘Turmali’, meaning ‘stone with many colours’. Tourmaline is not actually a single gemstone but a group of minerals, all cyclosilicates, that occur in different colours and transparencies: colourless, black, blue, green and pink. The last two colours can even be found in the same crystal—watermelon tourmaline. The bright red and bright green colours were particularly popular.

The superb pink tourmaline in this ring is known as rubellite. Rubellite can be such an intense red that the stone can be mistaken for or used as a ruby. There is a magnificent red tourmaline weighing 385 carats atop the great imperial crown of the Russian empire. Empress Catherine the Great (1729-1796) had the crown made for her coronation in Moscow in 1762.

The tourmaline is said to have many positive qualities. It is supposed among other things to increase creativity and have a calming effect, restore equilibrium and cure all manner of infections and poisoning.

Signed GRIMA on the inside of the ring and marked with the maker’s mark AGLtd, the London hallmark, the mark for 18-carat gold and the date letter t for 1974.