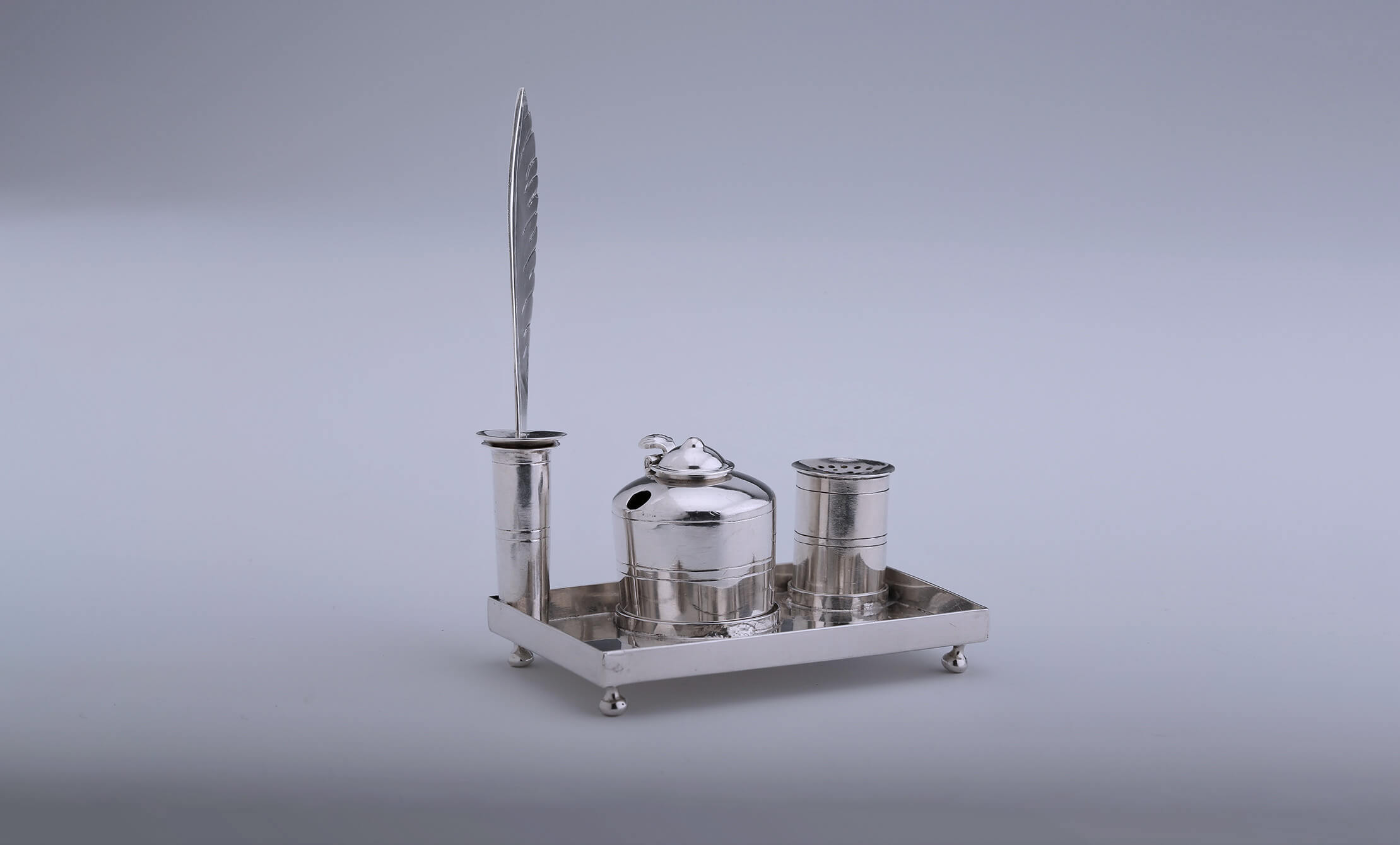 This miniature inkstand was made in Amsterdam, c. 1730 by the renowned miniature maker Arnoldus van Geffen. It has a rectangular tray with an ink pot and a sander standing on it. Sand was sprinkled on the paper after writing in order to dry the ink more quickly and prevent it from smudging when the letter was folded.

Various types of ink were developed in the eighteenth century; there was ink for printing and for writing. The first inks were used by the Chinese and the Egyptians and later by the Arabs. They date from 2500 BC or earlier and were made from particles of soot held in suspension by gum or resin.
One of the earliest known types of ink is Indian ink, a light-fast, deep black ink. This ink consists of molecules of pure carbon (a fine soot known as lampblack) combined with water in a colloidal suspension. There is no pigment, and no binder material, gum Arabic or similar substance is needed to bind the particles to one another or to the paper when the ink dries. After the water on the support dries, the molecules form a brittle film of carbon (note 15). The ink does not fade even centuries later—pure carbon is unaffected by light—and it is still possible to read the lettering even on seriously abraded papyrus, vellum and parchment.

More and more people learned to read and write during the seventeenth and eighteenth centuries. The level of literacy was strikingly high in the Dutch Golden Age because of the emphasis placed on education. If one was to be part of the growing economy, it was essential to be able to read. It was even a precondition for becoming an apprentice in a guild. It was believed to be so important that even foundling children were given an education and taught to read. The economic downturn in the eighteenth century was reflected in a deterioration in education and a decline in literacy.
As more people were able to write, so the need for inkwells grew. They were usually made of pewter—only the wealthiest could afford one in silver.

Until the year 700, pens were cut from bamboo and reed. Around that time these pens were replaced by quill pens made from goose feathers. In the eighteenth century, when this inkstand was made, people were still writing primarily with quill pens. They were made from moulted flight feathers collected in the spring. The preferred quills came from the bird’s left wing because the slight bend in the shaft meant that it curved away from the writer and sat more comfortably in the hand of—predominantly right-handed—users (note 16). Swan’s feathers were even more suitable as pens, but they were scarcer and consequently more expensive. To prepare a quill for writing it was first cut at an angle. The marrow was removed, after which the quill had to be hardened. To this end it was soaked in water until it was a gleaming white. The soaked section was then stuck into a holder with sand heated to a temperature of around 170-180 degrees Celsius. The sand had to be hot enough so that the pen sizzled but did not split. When the tip had turned translucent in the heat, the outer layer was scraped off the shaft and the pen was cut to a point. This point held the ink for writing.