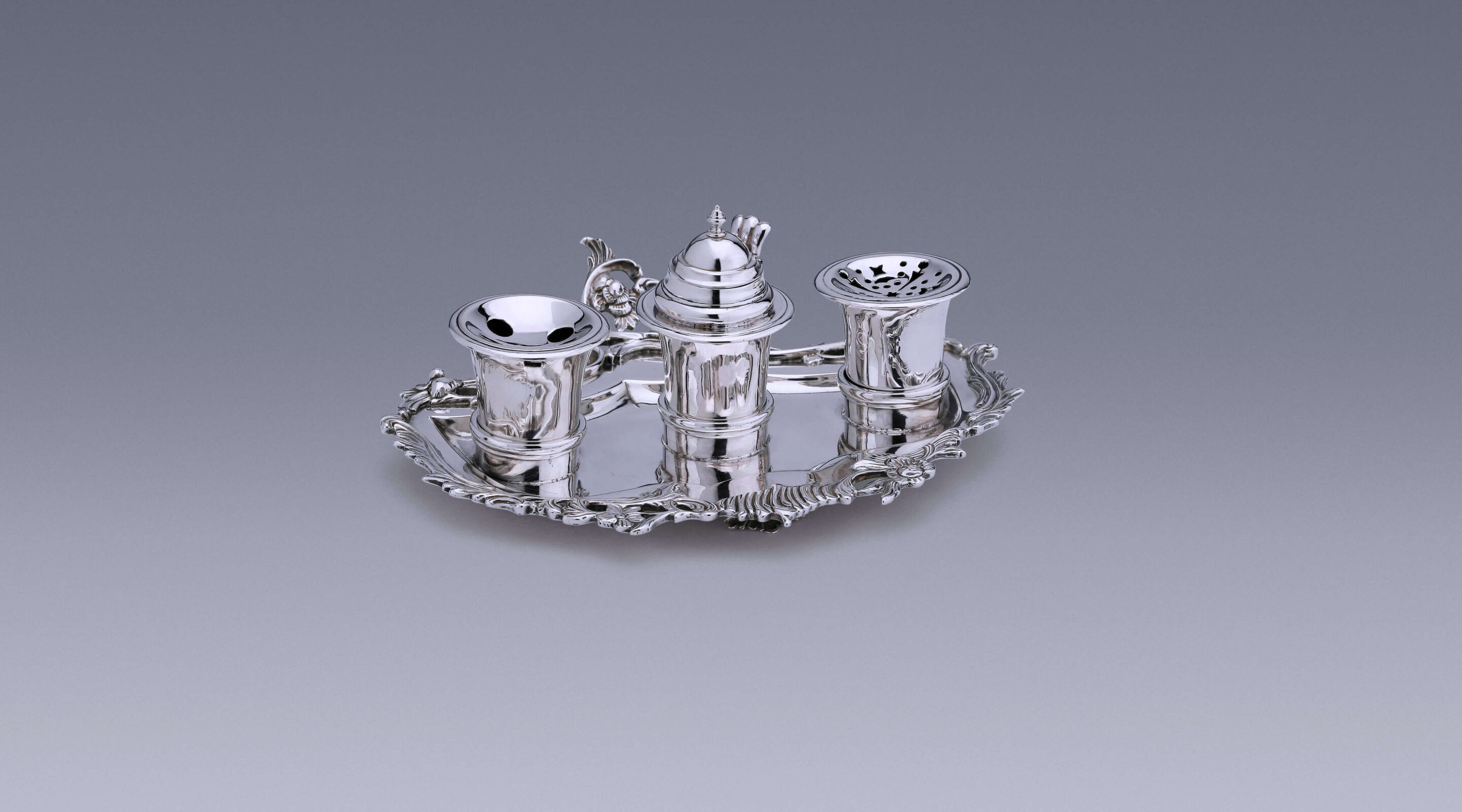 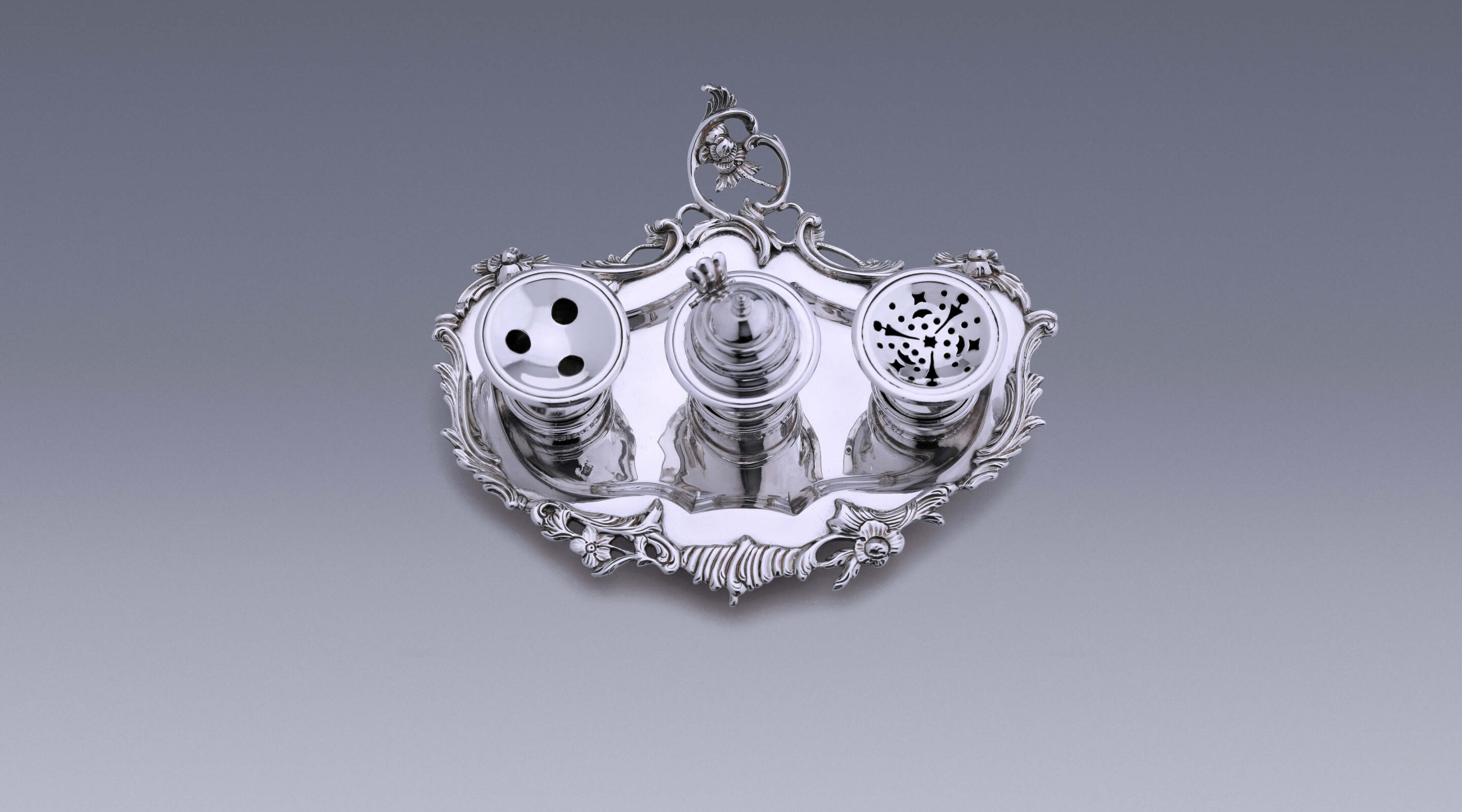 This exceptionally charming Frisian inkstand was made in 1784 by the Leeuwarden silversmith Hendrik Dauw.  Eighteenth-century Dutch silver inkstands made, like this one, in Louis XV style, are rare. The few known examples were made in The Hague, Rotterdam or Middelburg. We know of only three from Friesland, of which this superbly crafted inkstand is one.

This inkstand has a rocaille-shaped tray with three likewise rocaille-shaped cast feet. The edge of the tray is decorated with cast rocailles interspersed with flowering vines that terminate in the openwork handle. There are three rings on the tray; the one in the centre holds an inkwell with a hinged lid. To its left is a holder for three pens and on its right a sand caster with an openwork cover.

More and more people learned to read and write during the seventeenth and eighteenth centuries, and literacy levels were remarkably high in the Golden Age. This came about because education was given high priority. If you were to play a part in the growing economy, you had to be able to read. It was actually a pre-condition for acceptance as an apprentice by a guild. It was regarded as so important that even foundlings were given an education and taught to read. However, the economic downturn in the eighteenth century caused a decline in education and a consequent drop in literacy.

Schools were the responsibility of the civil authorities. Education was governed by regulations promulgated by burgomasters and the Dutch schoolmasters’ board, which essentially continued the ‘school orders’ of the seventeenth century.
There were various types of school in the eighteenth century. One was known as the German school, where reading and writing were taught. It was a primary school with three groups. There was a reading class for the youngest pupils who only learned to read, this was followed by a reading and writing class, and in the third-class children were taught reading, writing and arithmetic. The move to the next class often meant raised tuition fees. Better-off parents could then send their child to the Latin or French school. These were what we would nowadays call secondary schools.
The more people were able to write, the greater the need for inkstands. They were often made of pewter. Only the very rich could afford a silver one.

Inkstands appear with some frequency in Dutch group portraits of militiamen, patricians and the governors of charitable institutions in the seventeenth century, however there are no surviving silver inkstands from that period. The earliest examples we know of date from the first quarter of the eighteenth century; they were often small and sometimes part of a toilet set. These inkstands generally consist of an oval or rectangular tray with an inkwell and a caster. The caster would contain sand or ‘pounce’ which was sprinkled on the paper after writing so that the ink would dry more quickly and the letter could be folded without smudging.

Larger inkstands were made for the first time in The Hague around 1713. As well as the inkwell and sand caster they often have a bell or candlestick on the tray. The bell could be used to summon a servant when the letter was finished and had to be delivered. The candle was used not just for light, but to melt the wax used for sealing a letter. Towards the end of the eighteenth century inkstands became smaller again and the inkwell and caster were often made of blue or clear glass with silver mounts.

It is interesting that silver inkstands are virtually unknown outside Holland and Zeeland. There are two other, almost identical examples from Friesland, one of them was made in Harlingen by Fedde Acronius. Hendrik Dauw made this one eight years later in Leeuwarden. These are the only three eighteenth-century inkstands of this type known to have been made in Friesland. It is clear from Vincenzo la Barbiera’s painting that it was a costly object at the time. In 1785 he painted the portraits of the Harlingen burgomaster Sijds Schaaff and his wife Trijntje Winia sitting at a table. Schaaff, holding a quill, is writing a letter. The silver inkstand stands on a table in the foreground.

1764 was an important year in the life of the silversmith Hendrik Dauw, who was born in Frederikstadt, Holstein. In that year he was registered as a citizen in Leeuwarden, married Johanna Mensinga and was registered as a master silversmith with the guild in the town. He was thirty. He was productive and we know of several brandy bowls, chafing dishes, baskets and trays by him. He was successful enough to buy three houses in 1790. One of his apprentices was Lucas Oling, who himself became a master in 1779. Like his teacher, Oling was highly productive.

The inkstand is marked on the underside with the Leeuwarden assay mark, the Friesland provincial assay mark, the date letter G for 1784 and the maker’s mark HD entwined and crowned for Hendrik Dauw. 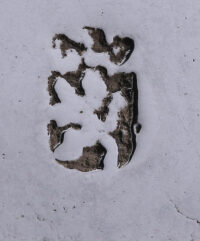 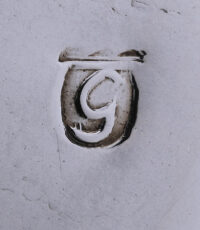 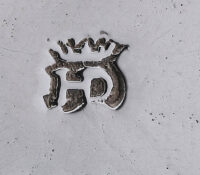