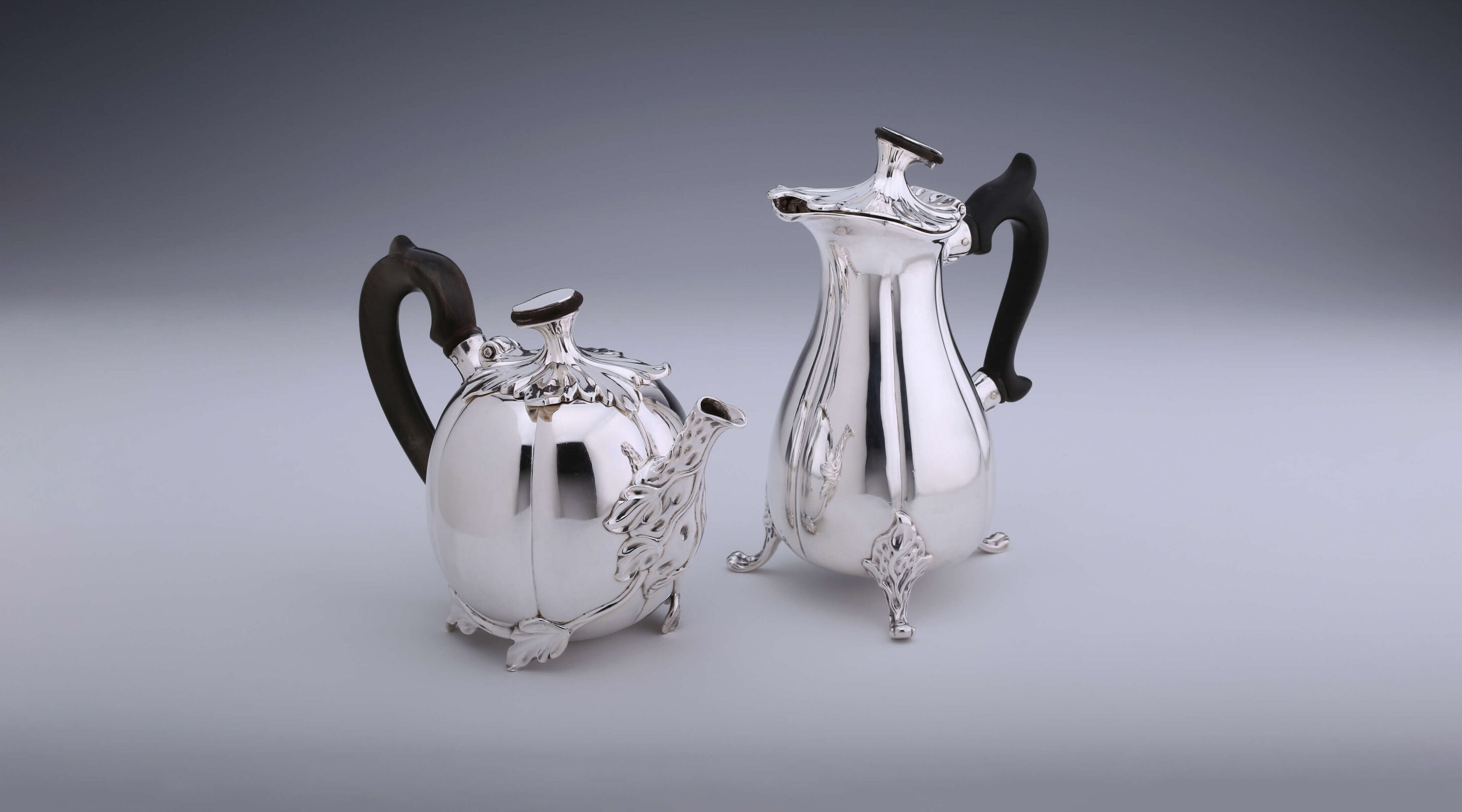 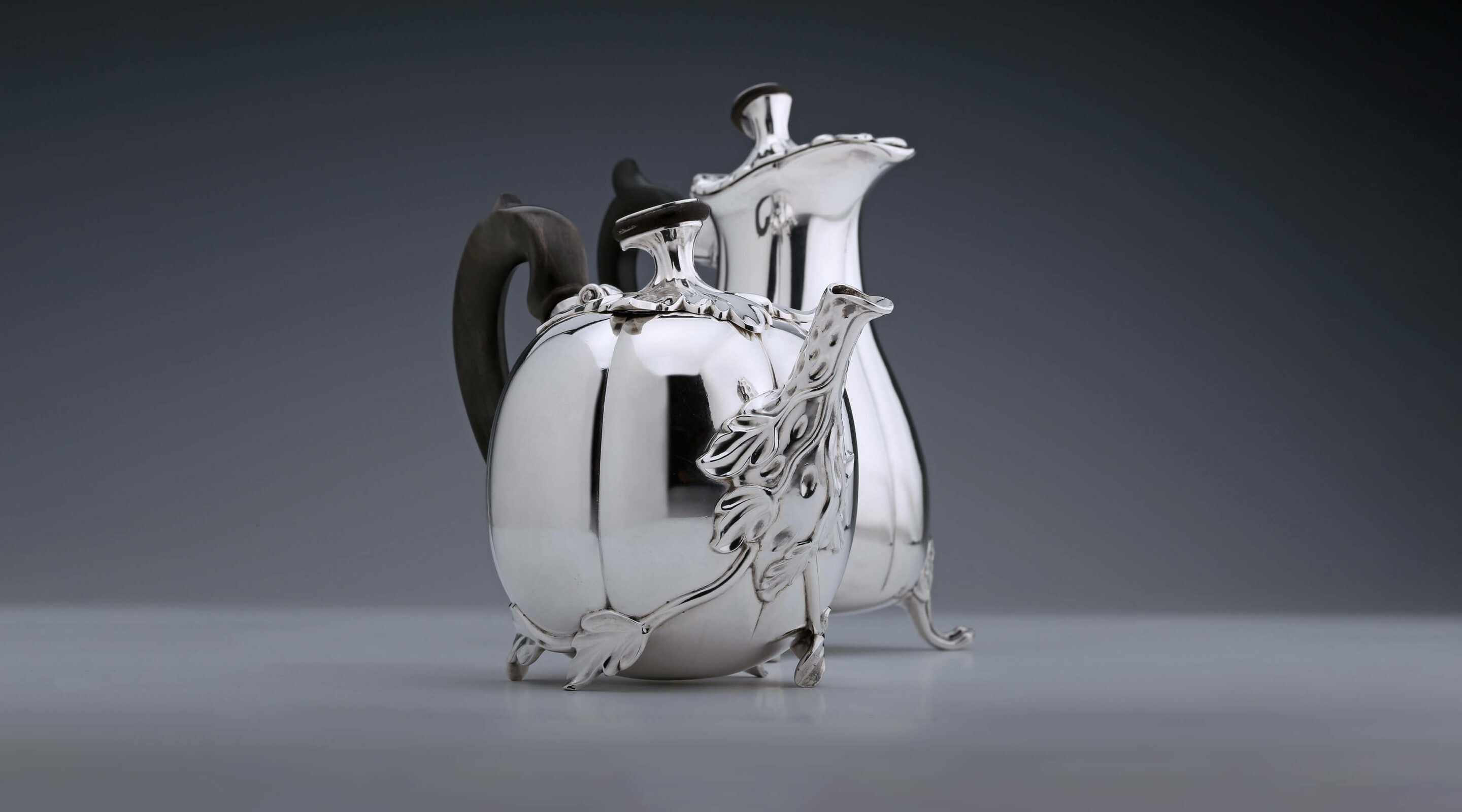 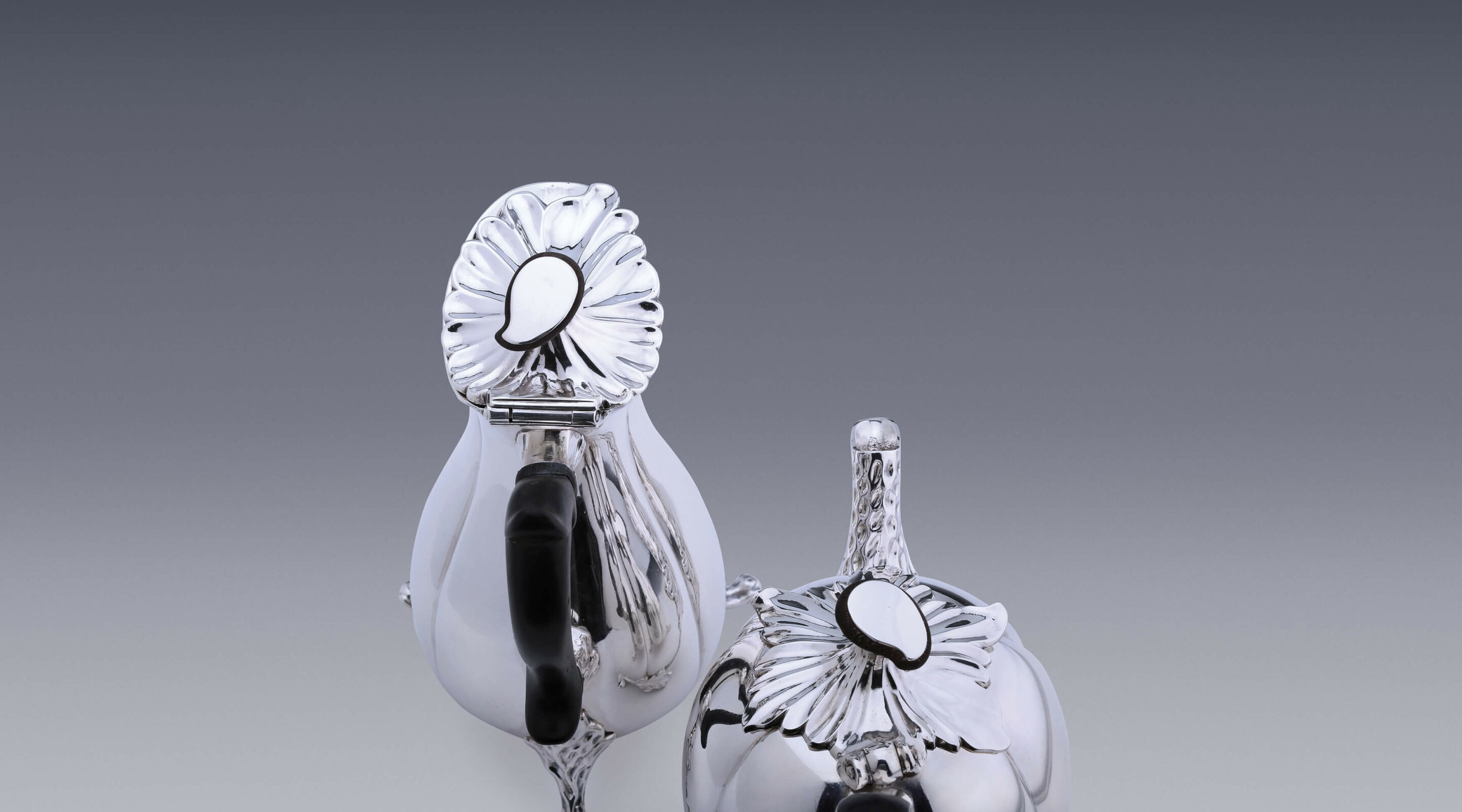 A Melon Shaped Teapot and Milkjug

This tea service consists of a teapot and a milk jug. It is designed in the naturalistic style that came into fashion in the Netherlands after 1760. The forms are derived from melons and aubergines. The milk jug and teapot are supported on three cast feet in the form of a gnarled branch topped with three leaves that enclose the chased body. The cast lids are shaped as veined leaves. The spout of the teapot is also decorated with foliar patterns. The handles are made of carved ebony.

This naturalistic style can trace its origins back to Madame de Pompadour, who became the French king Louis XV’s mistress in 1745. A group of courtiers and financiers brought her to the king’s attention as a means of exerting influence on him. Their scheme succeeded, and she became one of the most famous of Louis XV’s mistresses. She had immense influence over the king and it was she who spoke the immortal words aprés nous le deluge—after us, the flood—following Louis’s defeat at the hands of the Prussian king, Frederick the Great, in 1757. Her love of games and gambling was legendary, although not particularly unusual at the time. What was more important was her great interest in the arts. Louis XV appointed her patroness of artists and writers. She was very enthusiastic about the romantic ideas of the philosopher Jean Jacques Rousseau and his call of ‘back to nature’. It inspired her, among other things, to keep chickens in the gardens of the Palace of Versailles. Her love of nature had a considerable influence on the artists and craftsmen of the day, who took their inspiration from the natural world. This tea service is a classic example.

When tea first reached the Netherlands in 1605, it was thought to have therapeutic properties. Its potential applications as a medicine were investigated by renowned physicians, among them Dr Nicolaas Tulp. Once it had been established that the effect of tea on health was no more than mildly stimulating, it rapidly became popular as a refreshing beverage. At the end of the seventeenth century tea was a prestigious drink. Tea drinking became an important social occasion for upper-class women, and the tea party was the principal opportunity for them to meet. In the eighteenth century different qualities of tea came on to the market, so that far more people were able to afford it. One could flaunt one’s status by serving only the most expensive types. Fortunes were also spent on costly tea sets made from porcelain from the Orient and on silver tea services, preferably as sumptuous as this one by Isaac Samuel Busard.

The Hague silversmith Isacq Samuel Busard was born around 1706 and married Anna- Antoinette Trouillé on 22 June 1749. He died on 11 February 1784 at the age of seventy-eight. He lived successively on Fluwelen Burgwal, Kalvermarkt and Korte Poten. Busard became a master in 1731 and joined the Hague silversmiths’ guild the same year, becoming one of the finest silversmiths in the city. As a silversmith and shop owner—he sold pieces by fellow silversmiths as well as his own work— he was famed for the high quality and weight of his objects. He had an excellent eye for ornament and proportions, and the standard of his execution was unsurpassed.