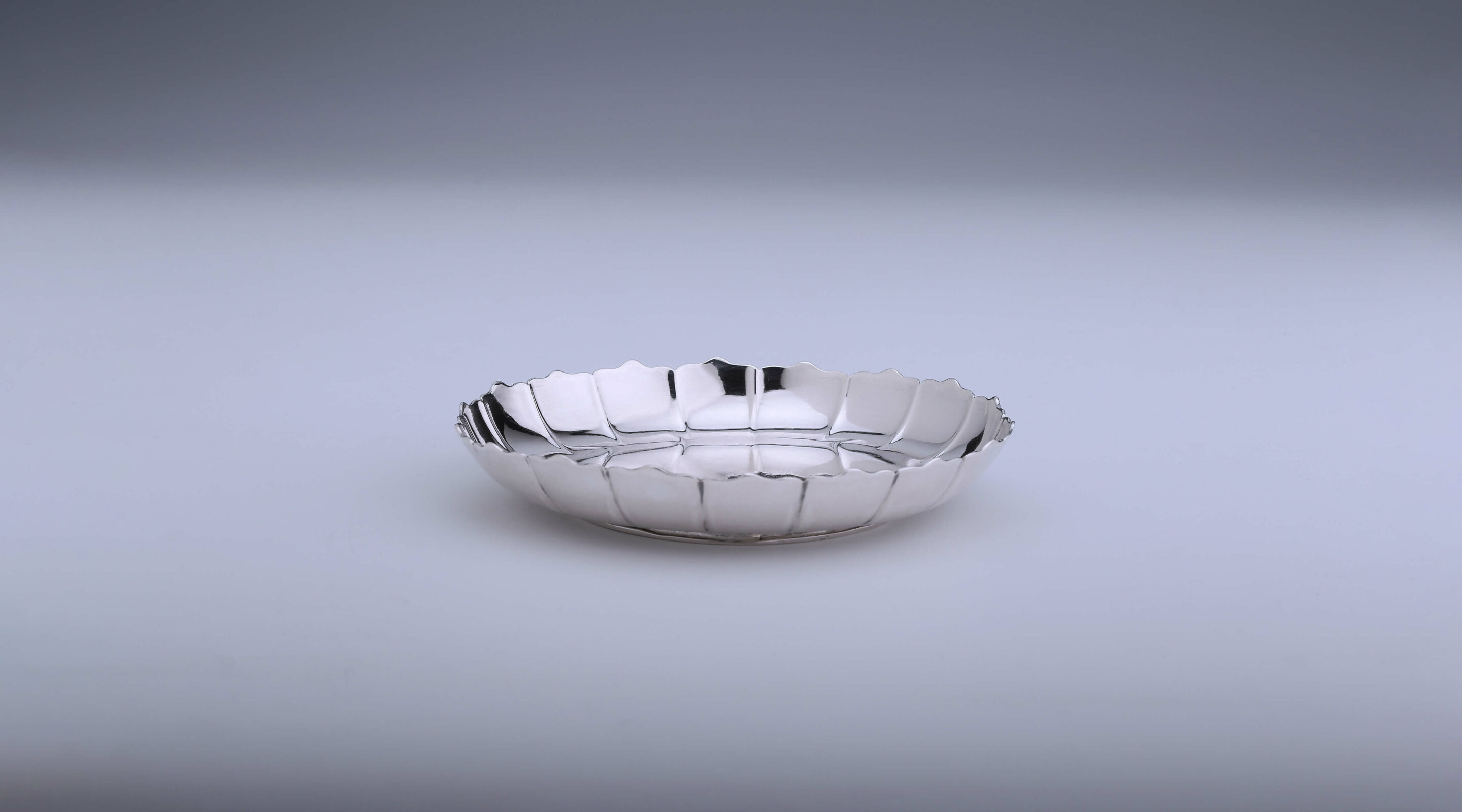 This small and very charming silver strawberry dish is a very early example. Made in 1717 by Johannes du Vignon III, the dish is round with a curved rim divided into lobes by chased lines. The understated design gives the dish a timeless air and creates a beautiful effect of light. It is a fine example of over three-hundred-year-old design.

Wild strawberries were eaten in the Bronze Age, but it was the Romans who first succeeded in cultivating the plant. It fell out of favour after the collapse of the Roman Empire. In the fourteenth century the plant reappeared in Dutch gardens, but the fruit was small and the plants were not very productive. The strawberry was believed to have medicinal properties.

In 1554 Rembert Dodoens described the astringent effect of the strawberry leaf in his herbal, the CruydtBoeck:
'Eerdtbesien cruyt ghesoden en ghedroncken/ stelpt den loop des buycx ende der vrouwen overvloedighe natuerlijcke cranckheyt. Tselve water daer Eerdtbesien cruyt in ghesoden es in den mont ghehouden sterckt dat tantvleesch/ het gheneest die quade sweeringhen des monts ende verdrijft allen quade rueck daer uut. Tsap van den bladeren gheneest die roose ende alderhande roodicheyt in daensicht.’ (Strawberry leaves steeped and drunk stem diarrhoea and excess menstruation. The same water of strawberry leaves steeped and held in the mouth aids the healing of the gums and mouth ulcers and drives out bad breath. The sap of the leaves cures dandruff and redness of the face.’)
The strawberry as we know it today does not descend from the wild or wood strawberry. Amédée-François Frézier, a French army officer and amateur botanist who was stationed in South America for Louis XIV, discovered the considerably larger Chilean strawberry. In 1714 he brought the first two of these plants back to France. In Brittany this Chilean strawberry was crossed with the Canadian scarlet strawberry to improve yield. It was not until 1749 that the crop was big enough to ship throughout Europe. The fruit was so expensive that only the very wealthiest could afford it.

The oldest known silver strawberry dish was made in London in 1699. This example, made in The Hague by Johannes du Vignon III in 1717, is one of the earliest known Dutch strawberry dishes. The earliest known example in Dutch silver was made in 1710 and was part of our collection several years ago. Strawberries were incredibly expensive in the Netherlands. The quantity that would fit in this small dish would have cost many times more than the silver dish itself, which was by no means cheap to have made.

Johannes du Vignon was deacon of the Hague goldsmiths’guild in 1726 and 1735. His work was in such demand that in 1737 he was able to buy a house on the south side of Molenstraat. Until his death on 3 March 1746, Johannes du Vignon supplied all the gifts presented by the States General. In 1726, the church council of the Walloon congregation in Brielle commissioned a Communion set from ‘Mr. Vignon, Orfèvre á La Haye, deux coupes et une asiètte d’argent’, weighing 39 1⁄2 ounces for the sum of ƒ 144-10. In 1828, this silver was transferred to the Low German Reformed congregation. The chalices were subsequently converted into collection cups. The Kunstmuseum in The Hague has a toilet set that belonged to the Ten Hove family; the candlesticks were made by Johannes du Vignon III in 1717. In 1724, he made the Communion cups with the arms of the De Laet family on the foot, from the former French Church in Voorburg, now in Museum Catharijneconvent.