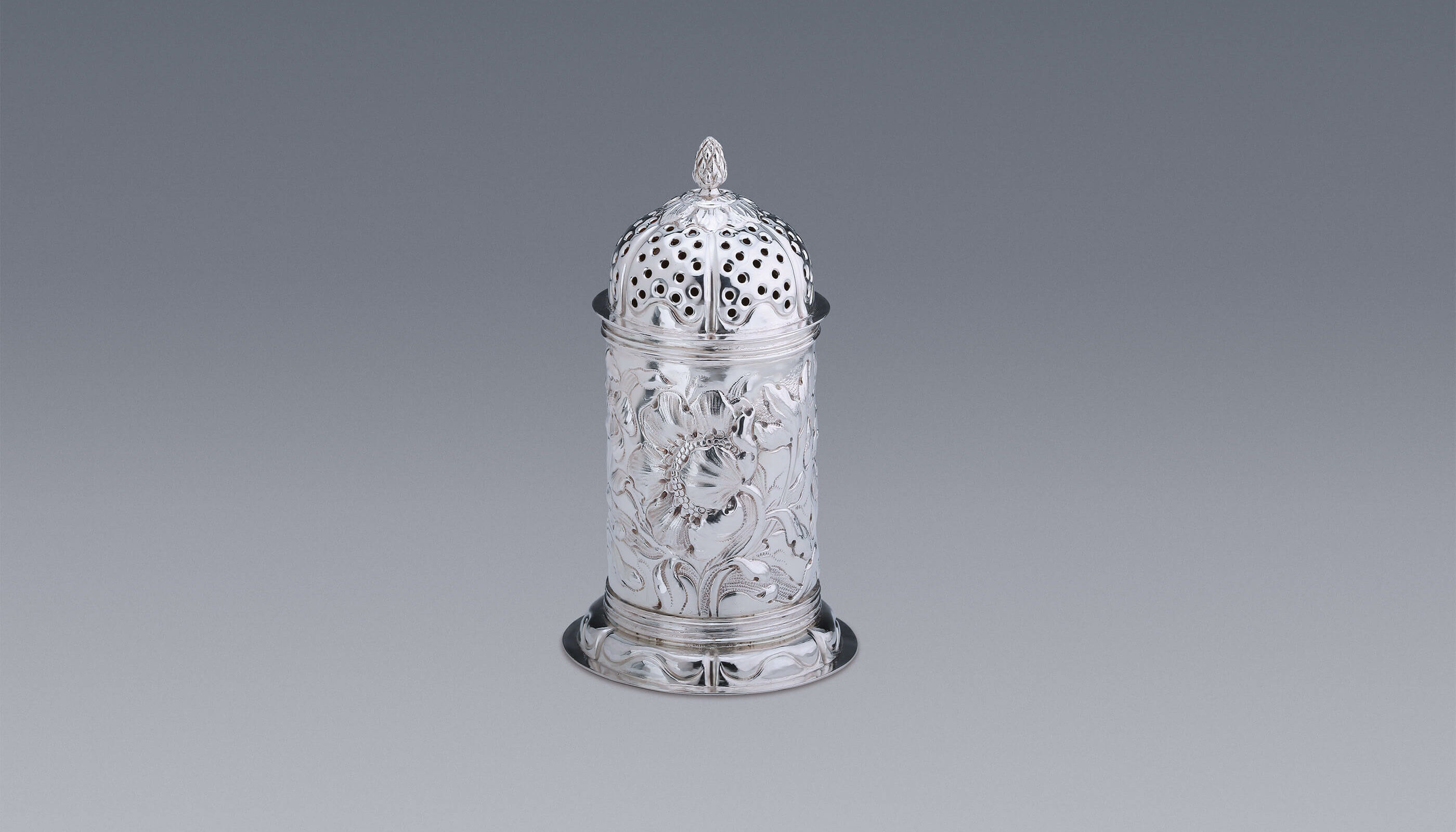 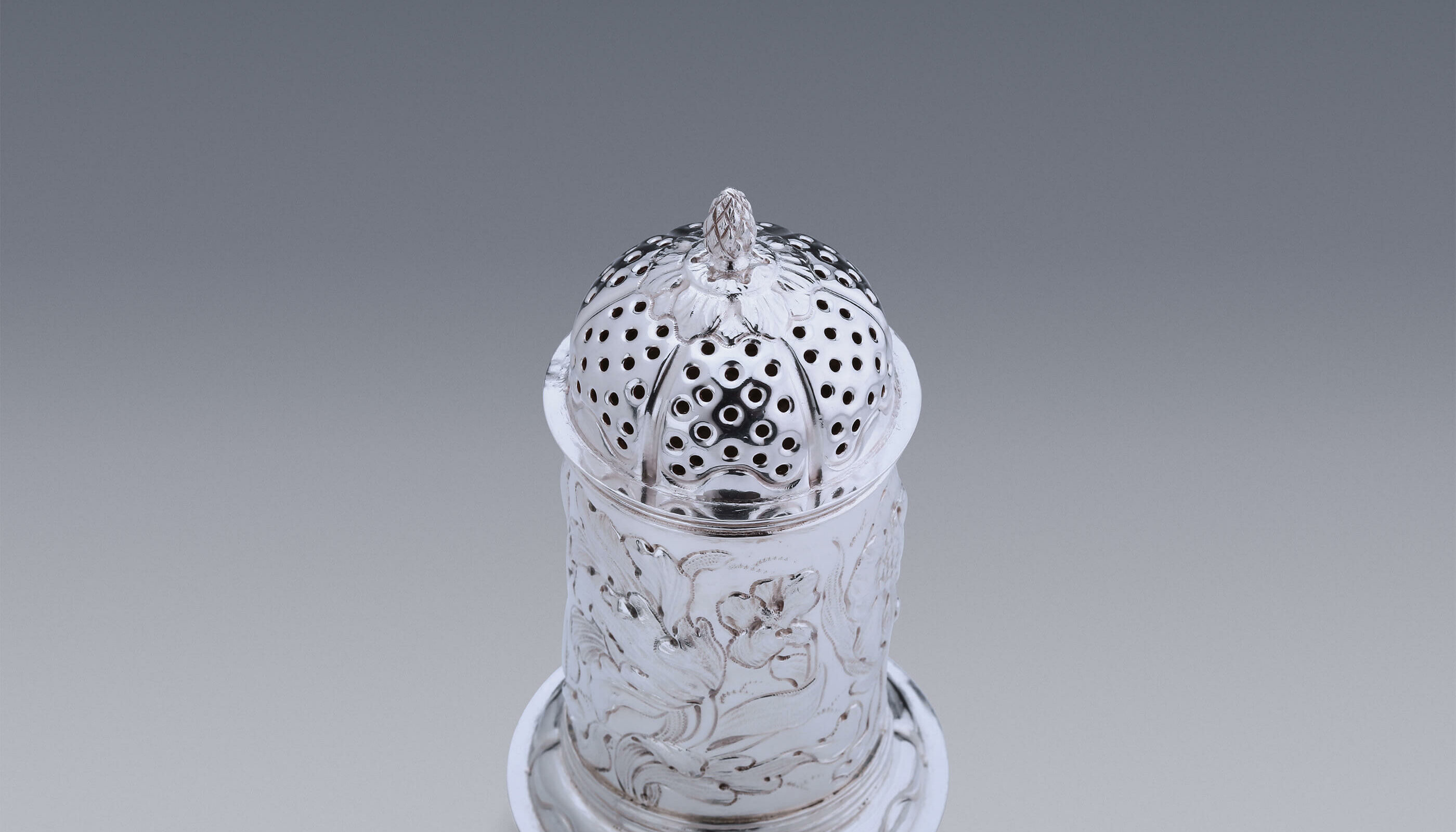 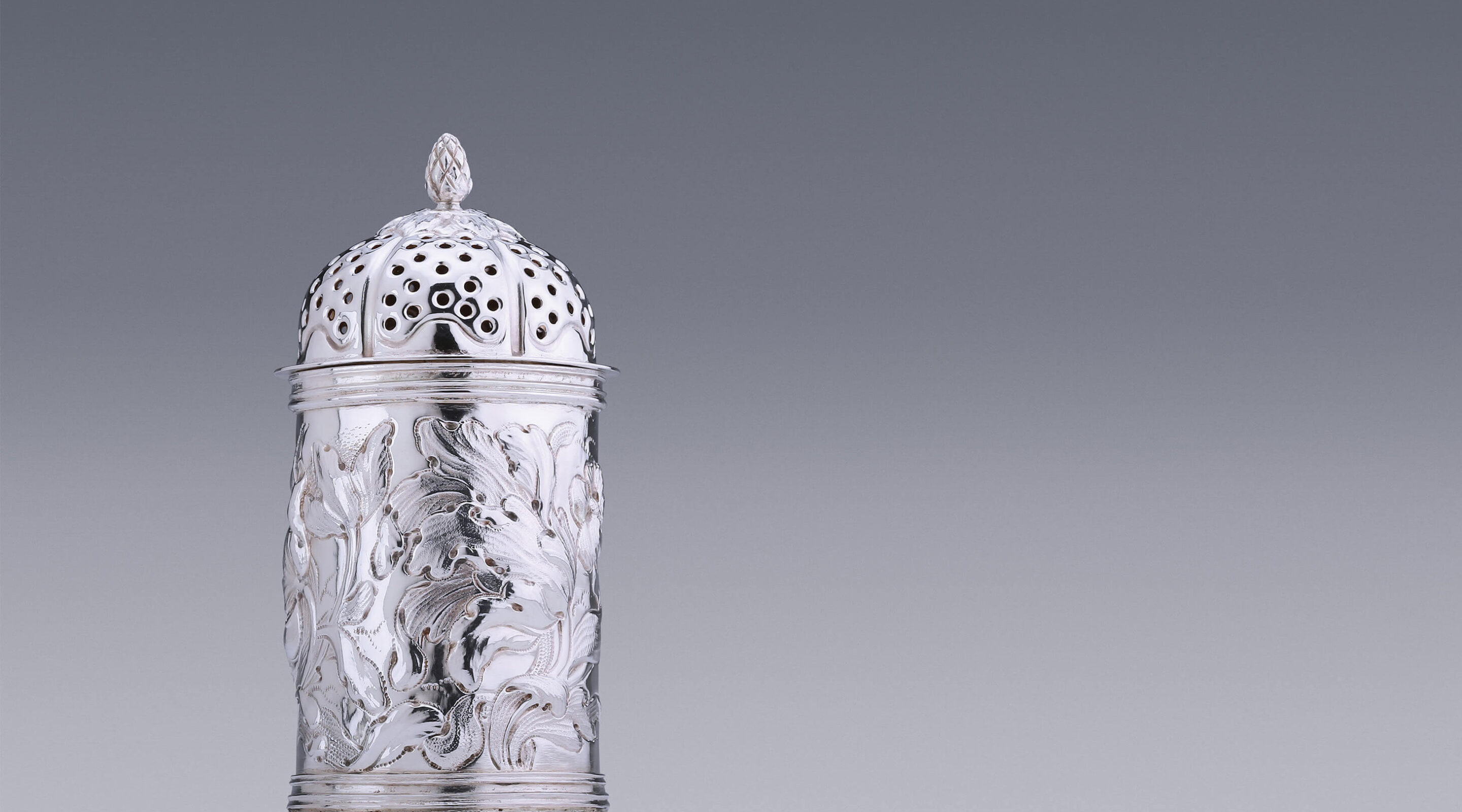 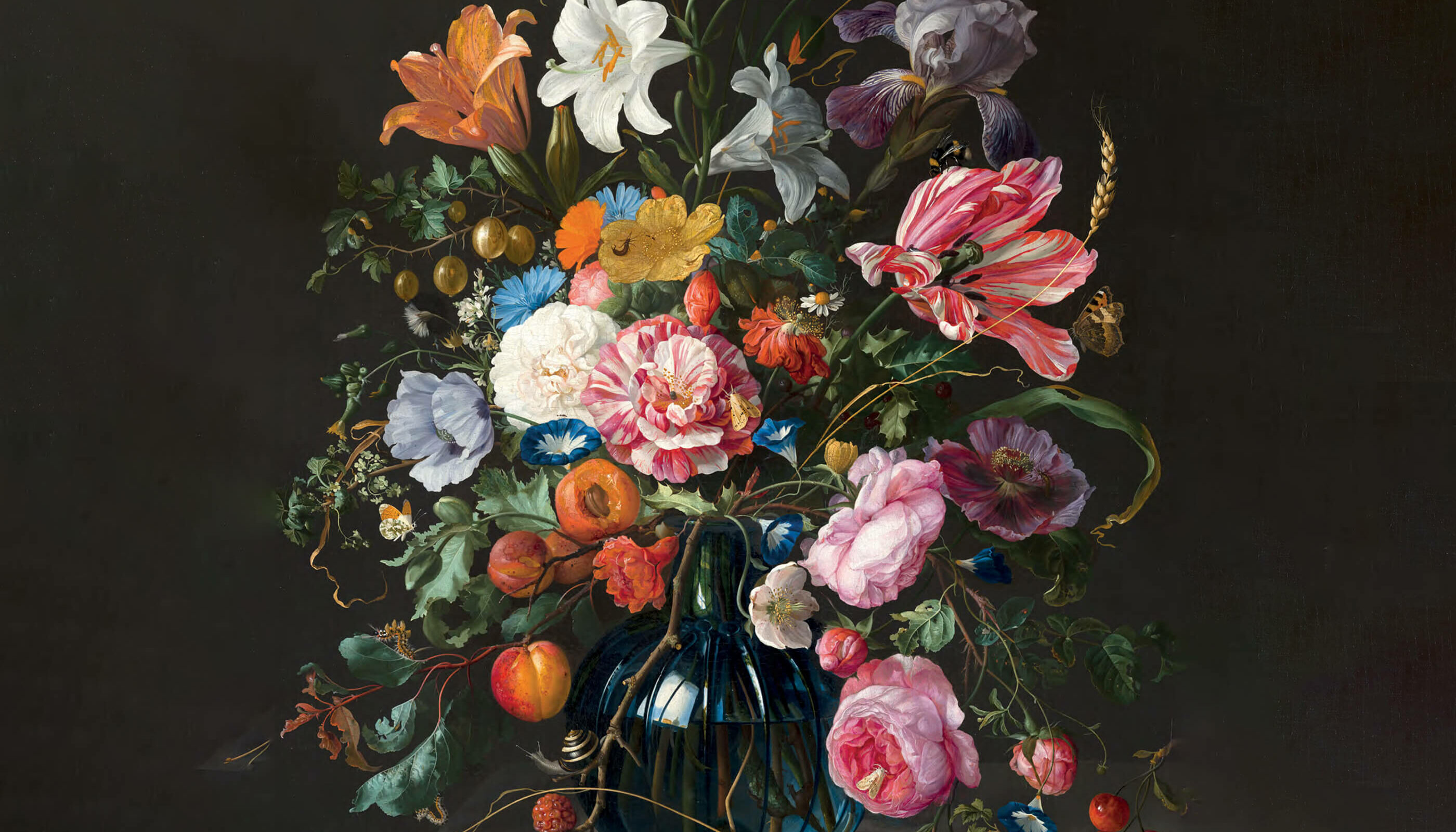 This very early round caster stands on a flared convex base divided into six segments, with a chased wavy line in each. The cylindrical body is elaborately decorated with various chased flowers like a tulip, anemone, daffodil and a poppy. Like the base, the removable domed cover is divided into six segments, each with a chased wavy horizontal line above which are the openings to sprinkle the contents. There is a chased flower on top of the cover, with a finial in the shape of a pine cone.

Spices like cinnamon, mace, cloves and nutmeg, as well as salt and cane sugar, were extremely costly in the seventeenth century. These luxury ingredients were imported by the Dutch East India Company and West India Company from distant lands and only the very wealthy could afford them. As befitted their exclusivity, they were presented at table in beautifully designed casters made of gold or silver. Sugar was not quite as expensive as spices, so sugar casters were generally slightly larger than those meant for spices. The earliest known sugar and spice shaker in the Netherlands dates from the second quarter of the seventeenth century and is part of a cruet set. The cylindrical models, like this one, stand on a wide, flaring base. They have a domed cover with round holes for sprinkling, topped with a small finial. Because of its shape, this early model is known as the ‘Lighthouse caster’.

The decoration on this caster is a superb example of the exuberant floral style so typical of Dutch decorative art in the seventeenth century. As more and more exotic blooms came to the Low Countries, so interest in and appreciation of them grew. Botany was taught at universities and botanical gardens were created. Especially tulips, originally from Turkey, that were introduced into the Dutch Republic in the sixteenth century were the subject of both scientific and financial interest. The flower was immensely popular and widely admired; artists even made portraits of the different varieties and these were published in tulip albums. As a result, the naturalistic style of decoration developed from the flamboyant high Baroque, which appears in the Netherlands in tapestry-woven table covers as early as around 1610, into what was almost a national style used in most branches of decorative art. Many flower still-lives were painted, such as the painting here by Jan Davidsz. de Heem.

In silver this manifested itself in a predilection for luxuriant chased ornament in high relief, with elegant garlands of fruit and flowers, acanthus leaves, extravagant tulips, sunflowers, anemones and carnations that often completely covered the surface of the silver.
There are only a few known objects in this specific style that were made in Den Bosch. This elaborately decorated piece by Somers is a rare and superb example.

‘s-Hertogenbosch (Den Bosch) enjoyed its heyday in the late Middle Ages. With an economy based on industry and both regional and international trade, Den Bosch was one of the largest and most prosperous cities in the Republic. The city had trade links in Flanders, Wallonia and the Rhine region, so silversmiths and goldsmiths could make a good living there and the guild flourished as early as the fifteenth century. Commissions from the Catholic church played a very important role in the output of the guild members, and a great many silver objects were also made for the militia guilds so typical of Brabant.
The city’s success came to an end in 1567, at the beginning of the Eighty Years’ War (1568-1648), when many citizens fled for political reasons. The war had a disastrous impact on the economy and the size of the population and consequently on the goldsmiths’ and silversmiths’ guild. In 1540 twenty-one masters enrolled as members of the guild were working in the city. By 1600 there were just six. The city recovered somewhat in the second half of the seventeenth century and an average of thirteen silversmiths and goldsmiths were active there, a number that rose to twenty towards the end of the century.

The production of secular silver and silver for use in Protestant churches started quite late in Den Bosch, in the course of the seventeenth century. This reflects local history. During the Generality Era, when the area was ruled directly by the States-General, the only patrons were the Protestant governors—there was no wealthy middle class. Seventeenth-century ornamental silver from Den Bosch like this caster is therefore very rare

As well as the Den Bosch assay office mark the caster is marked inside with the Dordrecht assay office mark and the date letter I for 1631. It means that this caster was made from old, reused silver that originally came from Dordrecht. Reusing silver was far from unusual in the seventeenth century. On the contrary: in 1662, for instance, the guild deans and masters in Amsterdam complained to the city council about the provenance of the precious metal that was being used as the basic material. No less than seventy-five percent of the material that made up Amsterdam’s output was supplied by the customers themselves!

Johannes van de Laer became a master in 1643. It is known that he trained thirteen apprentices in his workshop, including his son Aeriaan. Johannes served as a assay master for eight years and was active as a silversmith unitil 1678, the year that he died. 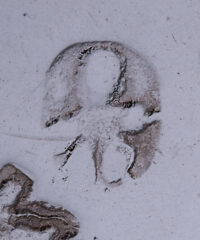 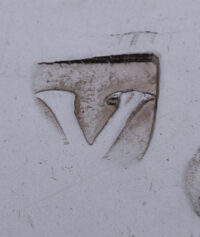 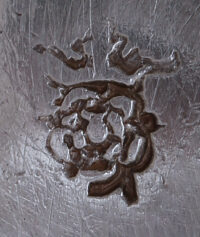 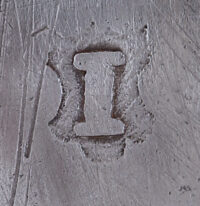