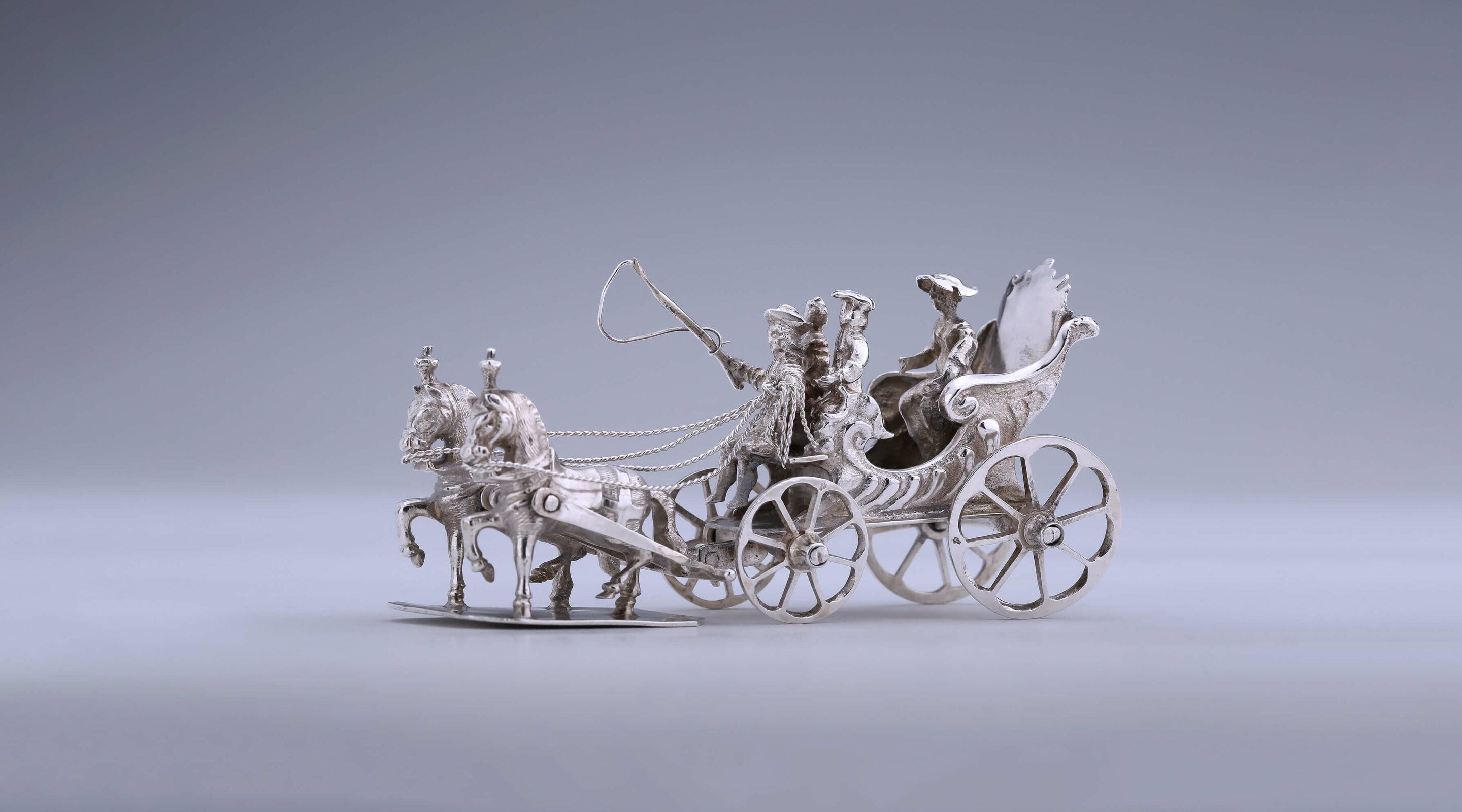 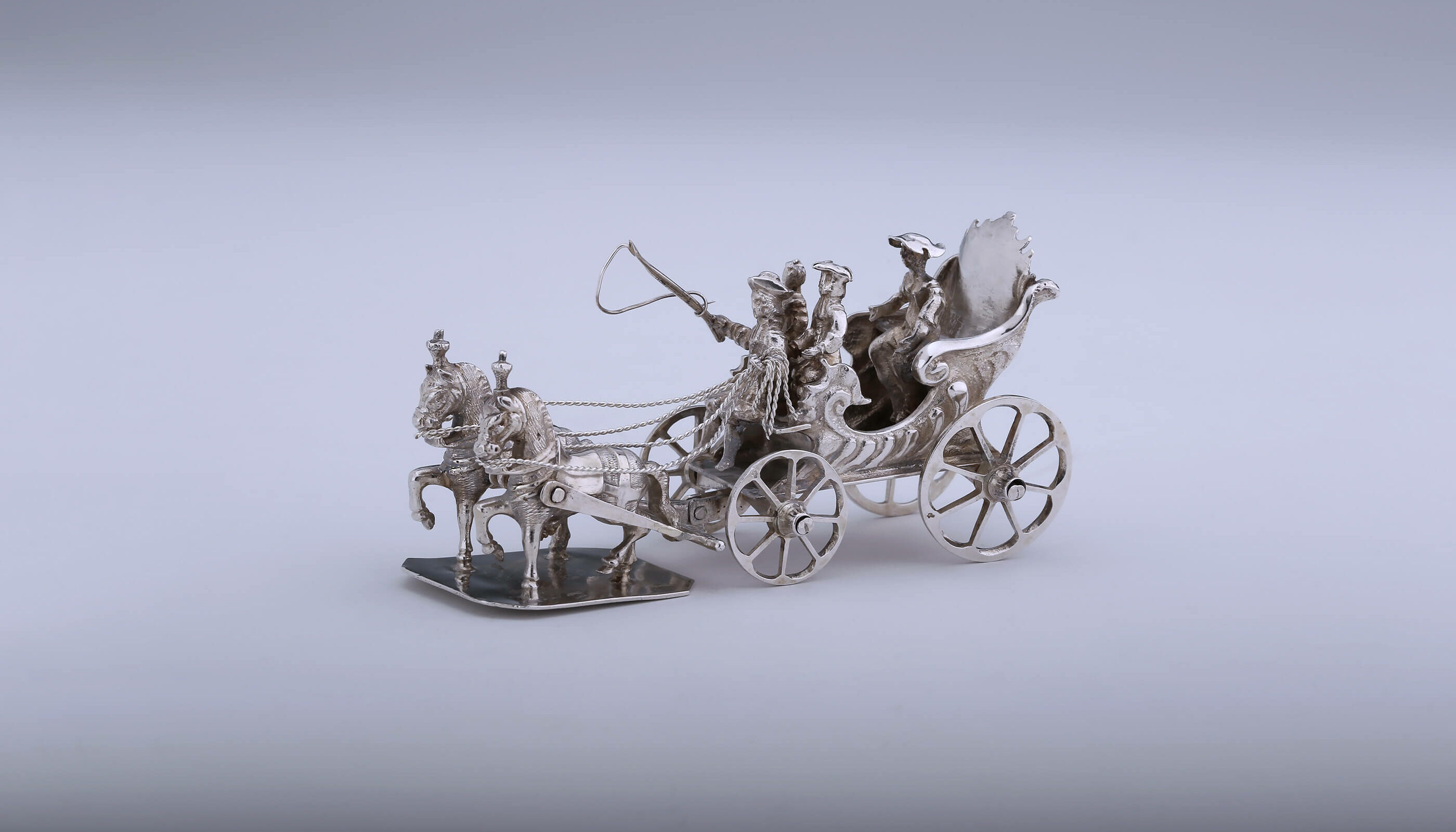 This fine open carriage was made by Arnoldus van Geffen in Amsterdam in 1760. The caleche is pulled by two horses, each with a plume on the head. The coachman is on the buck with stitch and whip with two children behind him and a lady with a big hat.

Miniature silver came into fashion in the Netherlands in the second half of the seventeenth century, but the eighteenth century is regarded as its heyday. It became such a rage that a great many superb quality pieces were made. Popular subjects included children’s games, occupations, sports, and vehicles like this carriage. These miniatures were made by renowned Amsterdam miniature specialists, Michiel Maenbeeck, Pieter van Somerwil and Jan Borduur and the maker of this carriage, Arnoldus van Geffen..

Trade flourished in the Netherlands in the seventeenth century and Amsterdam was the chief beneficiary. Between 1580 and 1690 the population of Amsterdam increased sevenfold from around 30,000 to 210,000. It became the largest city in the Northern Netherlands and the focus of urbanized Europe. The city was too small to accommodate the swiftly growing fleet and the flood of immigrants coming chiefly from the Southern Netherlands, France, Eastern Europe and Germany. It had to grow, and this growth was achieved in four urban expansion phases.

In 1612 the city council embarked on the ambitious expansion project conceived by the city carpenter Hendrick Jacobsz Staets, laying the basis of present-day Amsterdam. Three canals, Herengracht, Keizersgracht and Prinsengracht, were constructed. These three principal Amsterdam canals were dug simultaneously. By the time the work was completed, more than fifty years later, the city was four times the size and had the most efficient, fine-meshed system of waterways in the world. By way of a spider’s web of interlinked canals, goods from all over the world could be delivered to the doors of more than a thousand warehouses.

The streets along the canals were paved, and at the beginning of the seventeenth century a new phenomenon, the carriage, appeared, as it did in other Dutch towns and cities. Everyone who could afford to buy one did so, be it a cumbersome luxurious coach or a lighter barouche in the French fashion. The carriage swiftly became a status symbol. Even for destinations a mere two streets away, people would have the horses harnessed to the carriage, which often took longer than the actual journey. The number of carriages grew steadily, inevitably causing traffic problems. If two coaches wanted to pass in the narrow connecting streets between the canals the way would be completely blocked. The first one-way streets were imposed in 1615.

The number of coaches continued to grow and so did the congestion. In 1634 the Amsterdam magistrates issued a proclamation banning the driving of coaches through Amsterdam on penalty of a fifty-guilder fine. Here, though, they shot themselves in the foot; it was, after all, the members of the city council, the patricians, who owned the carriages. The measure was immediately watered down, so that anyone coming from outside the city could travel by coach to their house, provided they took the shortest route. Because there were a great many shortest routes it was not long before it seemed that there had never been a ban at all. Eventually a tax on wheels was imposed and brought about some sort of order.