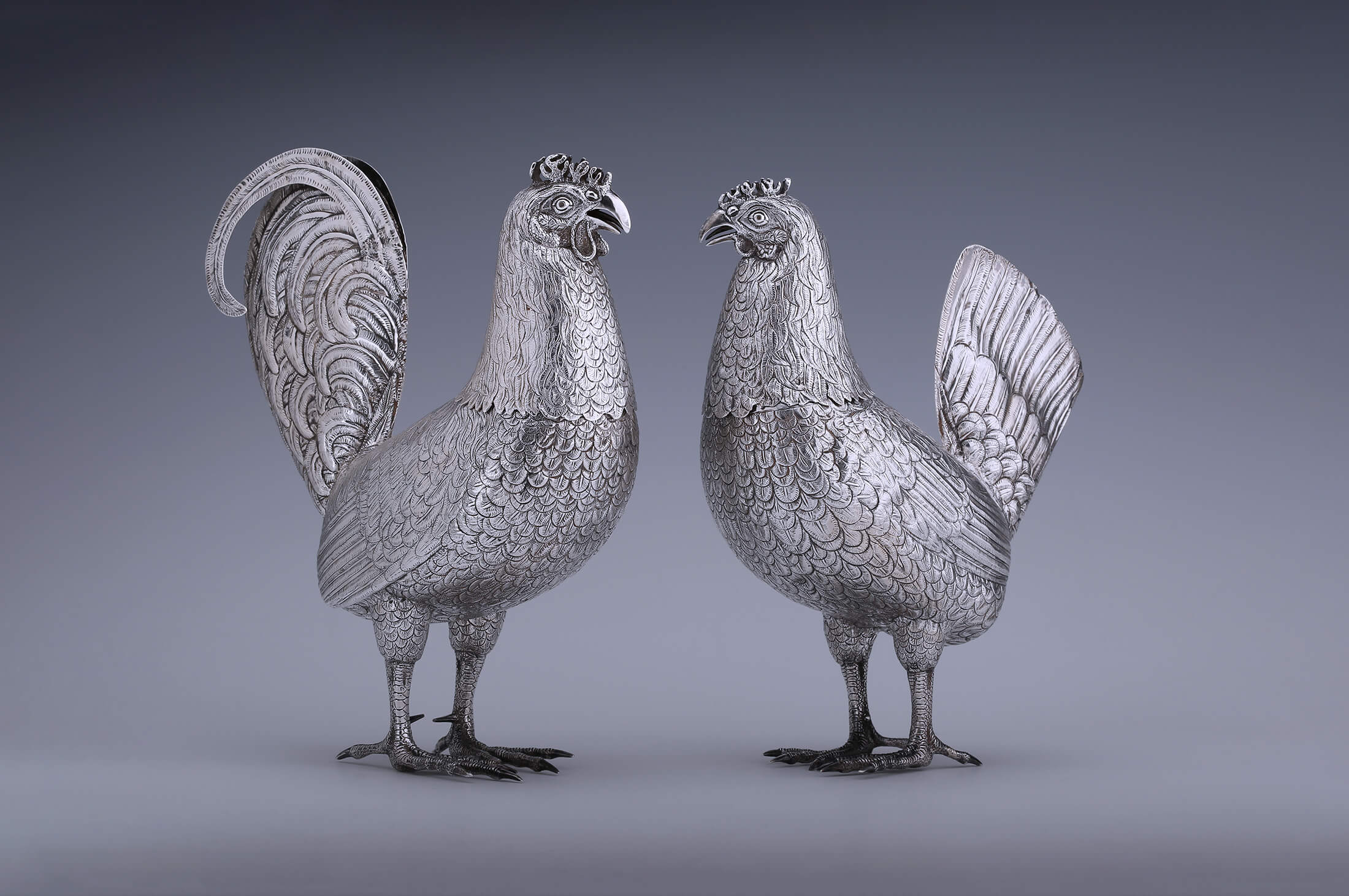 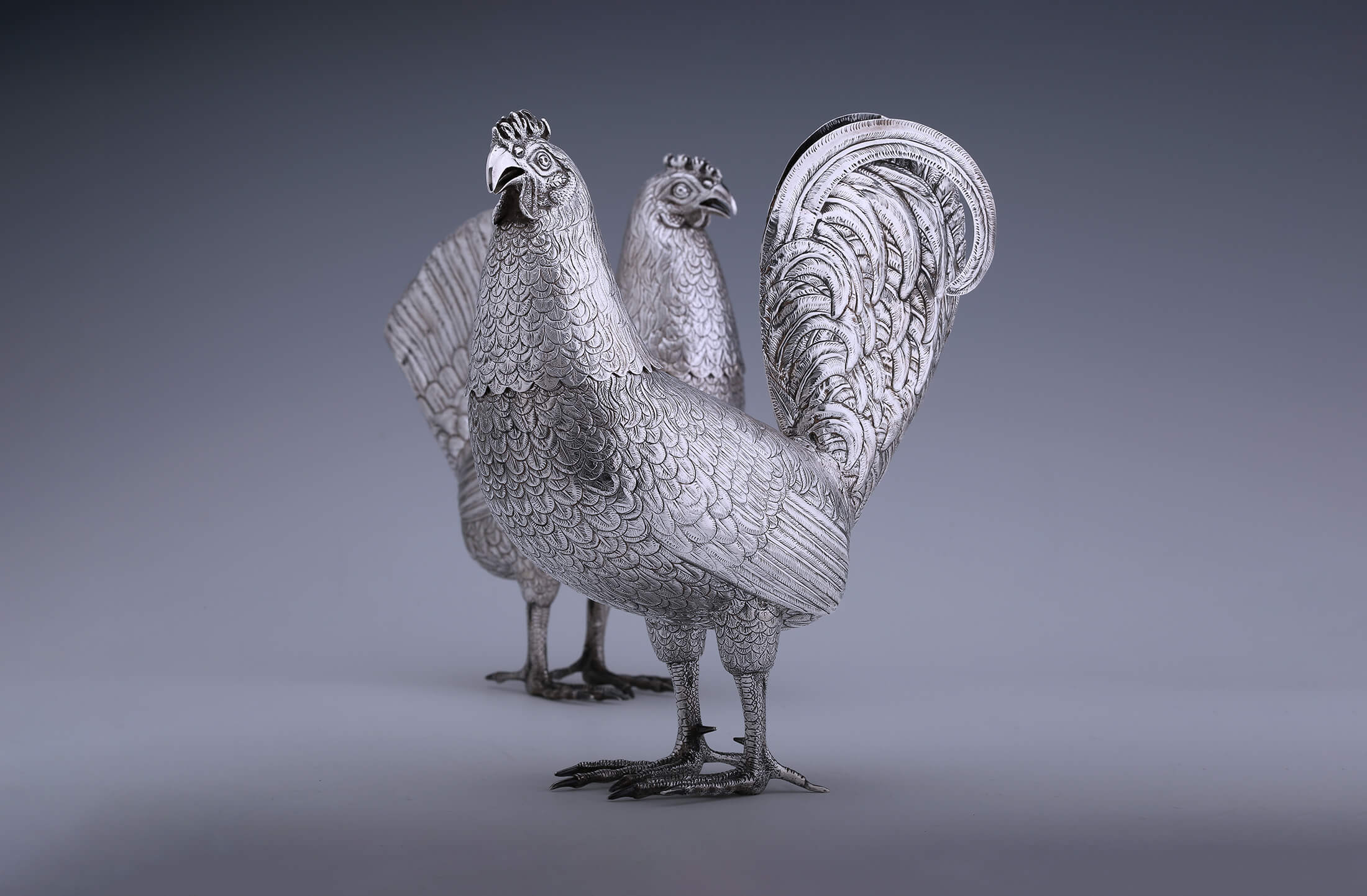 A Silver Rooster and Hen

These naturalistically designed rooster and hen were made in Dordrecht in 1618 and 1619 by Hessel van Buren. The birds stand straight on their feet and are completely engraved and chiselled with a refined feather pattern. The heads are detachable and have a plain, curved beak with a lobe on each side.

On the head, both have an upright comb. The rooster has a large tail with arched feathers. The upper large arched feather is cut from a separate silver plate and mounted on the tail at the base so that it is completely separate from the rest of the tail. The hen has a short tail. The legs are scaled and have sharp silver nails.

Silver animal figures from the 16th, 17th and 18th centuries are very rare in the Netherlands. Besides roosters and hens, a swan and several owl-shaped beakers are known, the latter often having a body formed by a cut coconut. The inspiration for making animal figures can be traced back to Southern Germany, where various horses, lions, deer, bears, ostriches and other animals were made particularly in Augsburg in the 16th and 17th century. Roosters are also known, such as the specimen from the Czech Republic, dated 1601, that was recently part of the collection of Kugel antiquaries in Paris. The aquamaniles from the Middle Ages may have inspired the silversmiths of the 16th and 17th centuries. The Metropolitan Museum of Art in New York has a 13th-century aquamanile in the shape of a rooster in its collection.

There are about 17 bird figures, including this rooster and hen, registered in the Netherlands. In the collection of the Victorian and Albert Museum are drawings by Reinhold Vasters from the second half of the 19th century. One drawing shows a hen on a pedestal with three chicks. As the hens known today are almost all identical in model and decoration, the question has emerged as to when these pieces were created. And if they were creations from Vasters' workshop or if he made the drawing from an existing 17th century silver hen. This has led to various articles in which, due to a lack of further information about the hallmarking used in Dordrecht and the research into the composition of the material used, it was not possible to give a definite answer.

After the last published article in 2009 on this subject by Drs J.P. van Rijen, intensive research was done on Dordrecht silver and in particular on the silver hallmarks used in that city. This year Mr. H. Breet published the results of his research in his book "De Dordtse Roos". The book clearly shows, amongst others, the different date letter and city hallmark series.
The hallmarks struck on a number of roosters and hens (including those in the collection of the Museum van Gijn) are also included. Thanks to this research into the silver hallmarks, it has now become clear to which date-letter series these animal figures belong. As a result, it is now certain that the specimens bear the date letters of the third alphabet, which was in use between 1600 and 1622. Only the rooster from the Museum van Gijn collection is marked with a date letter of the fourth alphabet (1625).
It is also apparent that various stamps were used. Both of the makers' mark, the town's mark and the date letters.

When the registered examples are listed chronologically, it is striking that usually only one animal figure was made per year. There are only two years in which two animal figures were made. As far as we know, this was only the case in 1616 and 1619. It is extremely unlikely that a maker in the 19th century would have stamps with different date letters from one single alphabet serie. Because these year letter series have now been identified, this has become clear.

The maker's mark HB with two brackets underneath has in the past been attributed to the Dordrecht silversmith Huibrecht van den Bergh. He worked in Dordrecht from 1643 to 1656.
Research into the date letters used in Dordrecht has revealed that the attribution to Van den Bergh is incorrect. In the period in which he worked, the fifth date letter series was in use, running from 1646 to 1668. The date letters on the bird figures known so far fall, except for one, within the third date letter series used in Dordrecht (from 1600 to 1622). The only silversmith working in the first quarter of the 17th century with the initials HB is Hessel Jacobsen van Buren. Therefore, this cock and hen are now attributed to Hessel van Buren.

Struck of the hallmarks

Both rooster and hen are fully hallmarked on the closing rim of the head with the city mark of Dordrecht, the date letter T for 1618 and V for 1619 and the maker's mark HB with two hooks underneath for Hessel Jacobsen van Buren.
Both the body of the rooster and the hen are also marked with the 19th century Z1 stamp. 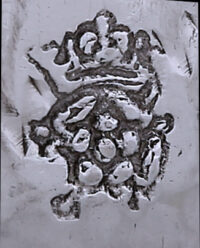 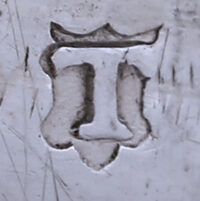 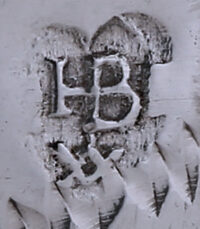