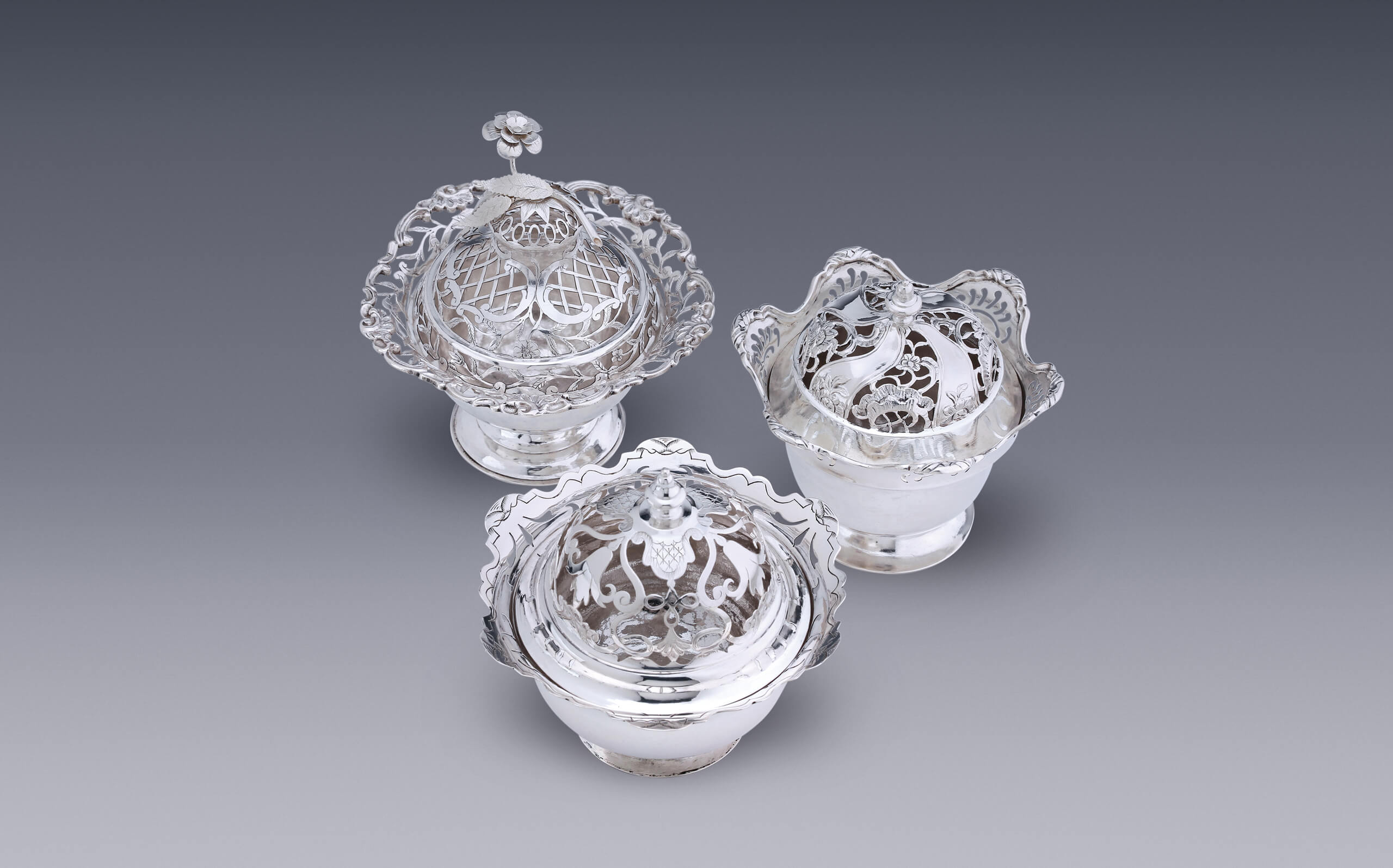 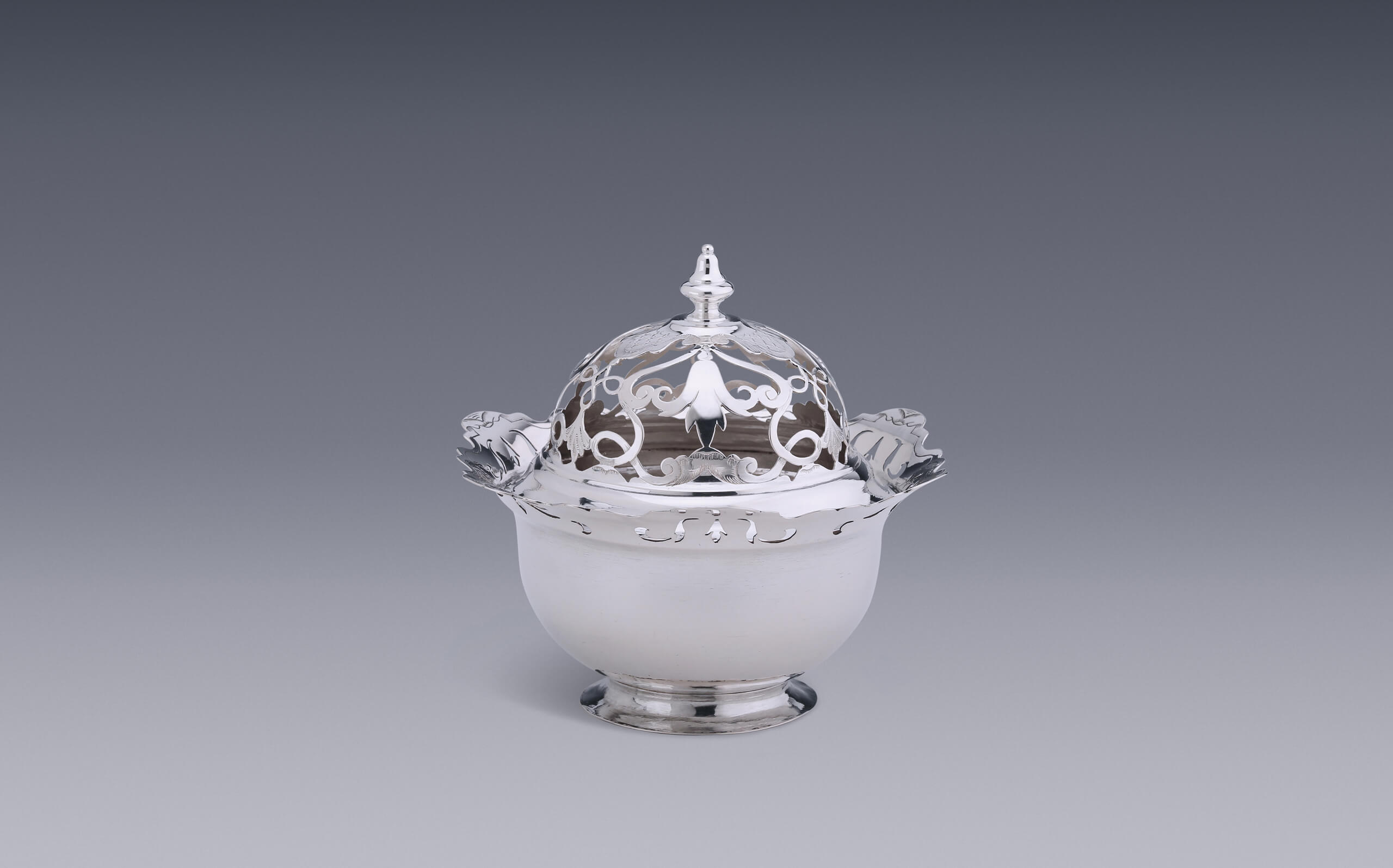 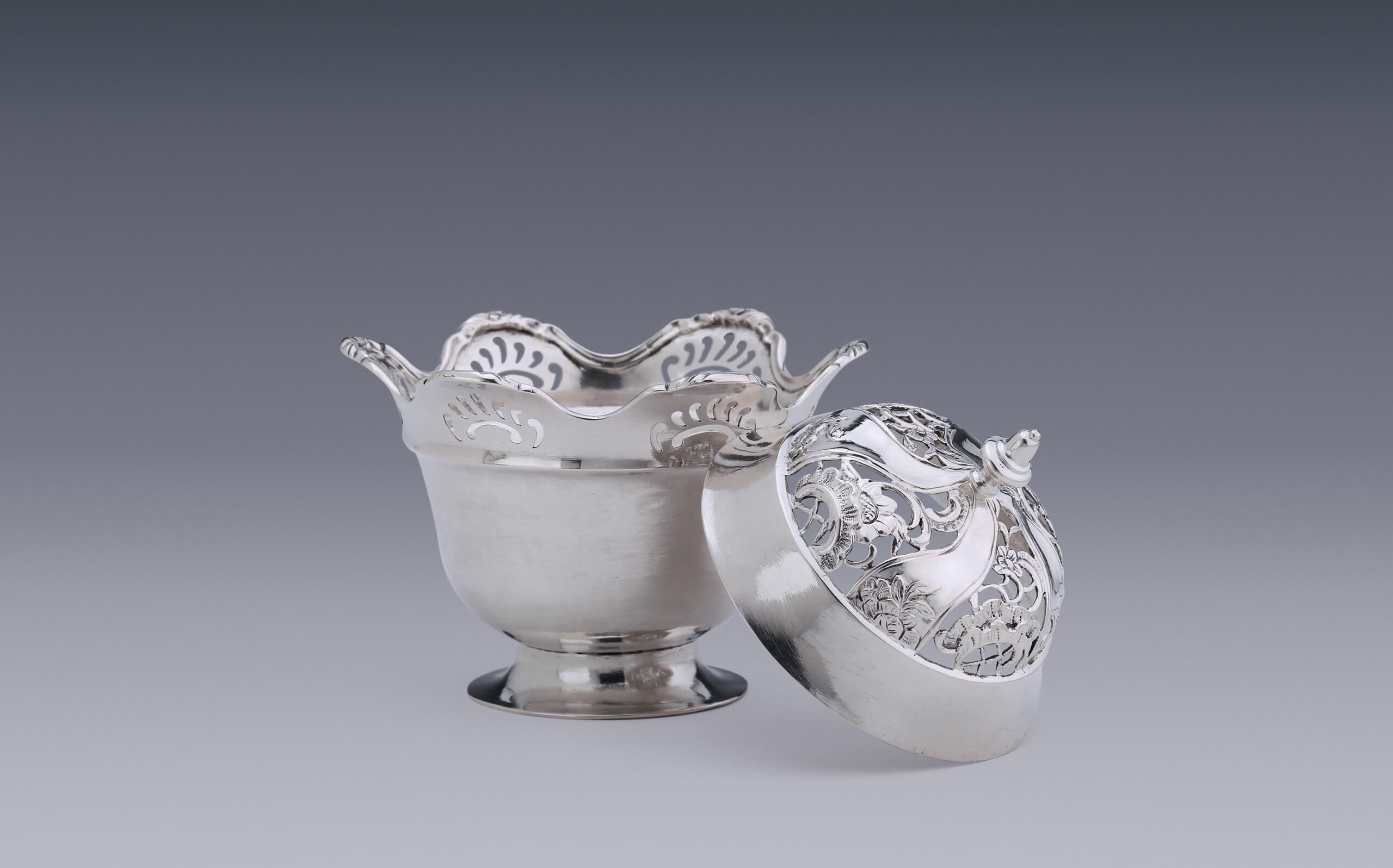 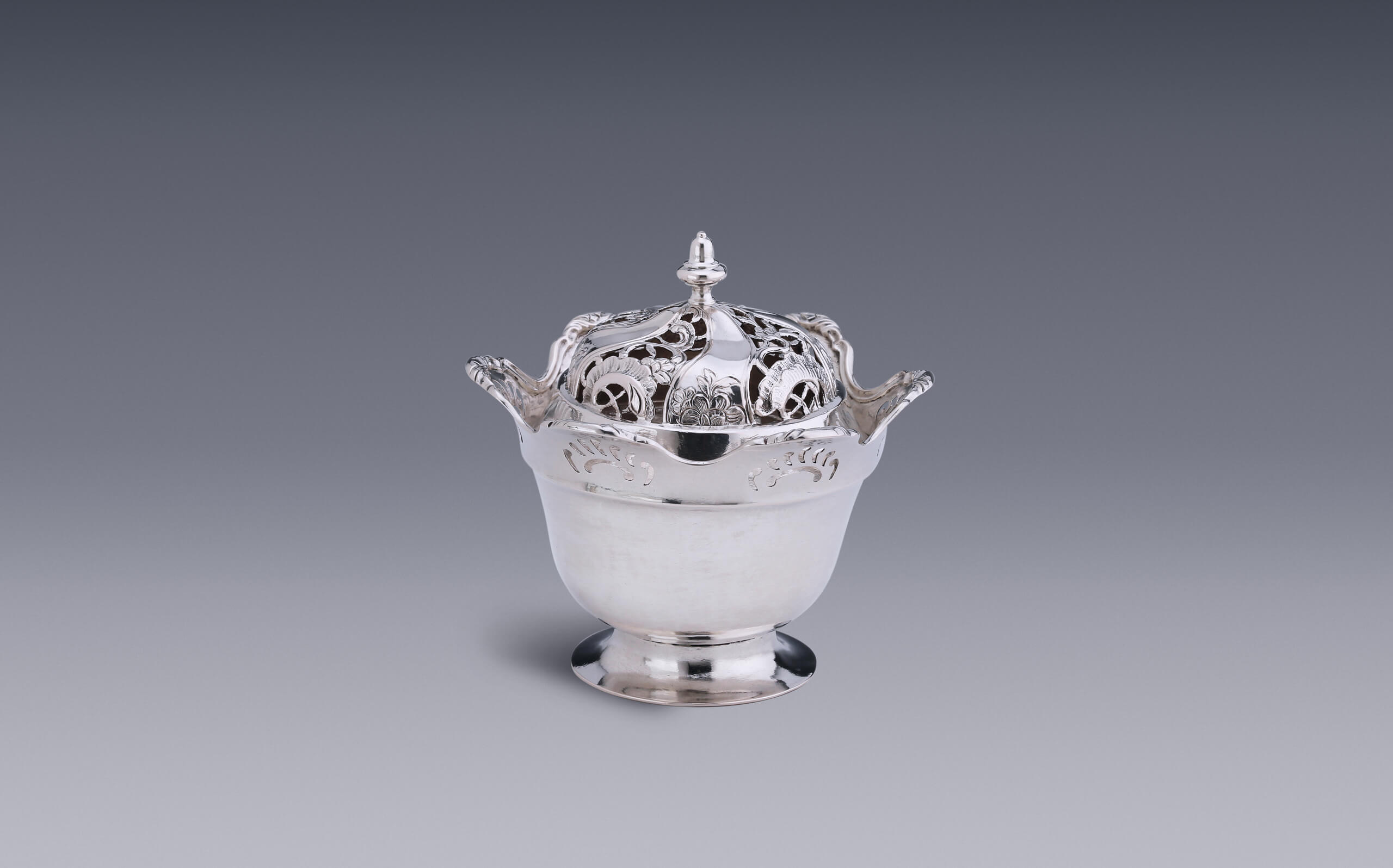 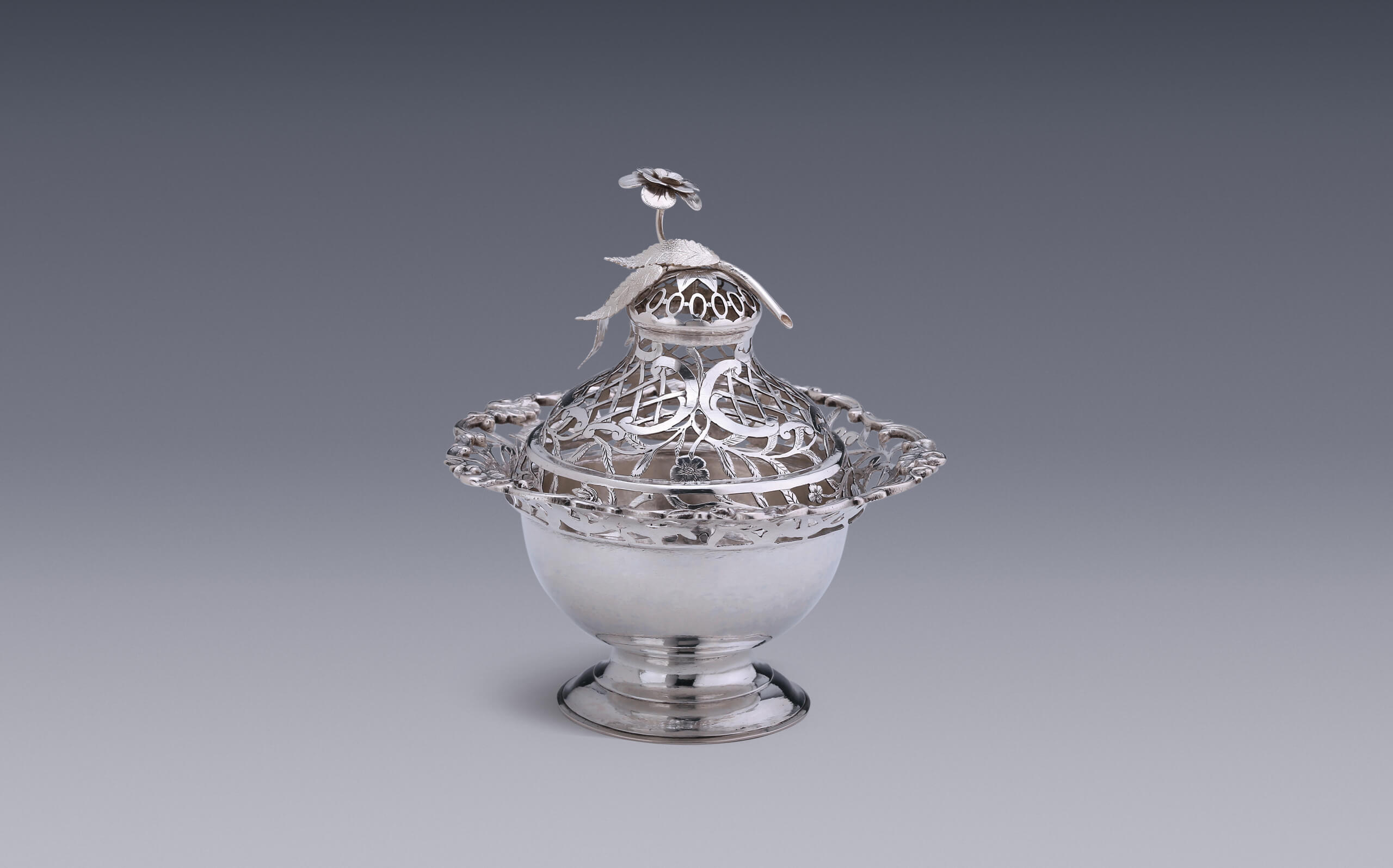 These little bowls were made to hold potpourri. They are unusual objects, and only thirty Dutch silver examples are now known. The majority of them were made in Zutphen, but there are also examples from other towns along the River IJssel such as Deventer and Doesburg. More exotic and extremely rare are potpourri holders from Arnhem and Medemblik. These specimens, made in other cities, were almost always made by a silversmith who had a link to the city of Zutphen.

Each of these three very rare and charming silver bowls stands on a plain foot ring. The hemispherical bowls are completely plain with a scalloped openwork and engraved rim that flares out. The separate domed lids have openwork flower and foliar motifs and are engraved with strapwork and rocailles. Two lids have a small, moulded knob, the other has a knob in the shape of a flower on a stem with leaves.

These little bowls were made to hold potpourri. This is a concoction of dried herbs, spices, flower petals and dried citrus peel that spreads a pleasant fragrance in the house. Flowers and herbs were picked in the spring and summer and left to dry for several days. They were then sprinkled with salt to draw the moisture out of the leaves and petals. The blend was stirred from time to time and fresh herbs, flowers or spices were added, with more salt each time. During this process the mixture fermented. By autumn, it was giving off a strong perfume. The fragrance could be made to last for months by adding orris root.

Until into the nineteenth century people in Europe believed that disease originated in poisonous clouds emanating from decaying bodies, rotting vegetation, mould and dust. In the fight against this miasma or ‘bad air’, people have freshened the air with fragrance since the Middle Ages. Potpourri was hugely popular with the French elite. They are known to have used potpourris as early as the 17th century. The rest of Europe did not follow suit until the 18th century. Containers for potpourri could be found in virtually all elegant Parisian interiors until well into the nineteenth century. They were made in all sorts of shapes, sizes and materials—from porcelain, earthenware, gilt bronze, gold and silver to Japanese lacquerware and in the most spectacular designs. They contained a small inner holder in which the potpourri was placed. The fragrance was diffused throughout the room through holes in the lid.

Potpourri in the Netherlands

As they have in France, England and Germany, some China potpourri bowls and vases have survived in the Netherlands. The earliest known Dutch specimens, however, are made of silver. It is remarkable that the model of these Dutch potpourri holders is completely different from the foreign specimens, and they all have approximately the same shape and are about the same size. In general, Dutch silversmiths in the provinces followed the fashion in the silver centres in the west of the country. Remarkably, this does not appear to be true in the case of silver potpourri holders, most of which were made in Zutphen. The reason for this local phenomenon is as yet unknown, but perhaps it was simply a regional fashion trend.

In the late Middle Ages, the Hanseatic League, a commercial and defensive confederation of merchant guilds and market towns in central and Northern Europe, brought great prosperity to Zutphen. The town’s merchants bought and sold their goods in ports on the Baltic and North Sea and spent some of their profits on raising the status of their town. Expensive merchants’ mansions were built and the town walls and gates were embellished with towers. From the fourteenth century to the nineteenth, Zutphen silversmiths made fine decorative and practical objects for the aristocracy and wealthy citizens, the churches and monasteries, the town council and town institutions like the Bornhof and the Oude and Nieuwe Gasthuis.

This round potpourri holder dating from 1752 is a plain hemi-spherical bowl with a round foot and an openwork and engraved rim. The lid is ornately openwork with band work, stylized flowers and engraved lambrequins in Louis XIV style. The lid has a moulded knob.

Arnhem already formed early in the thirteenth century at the place where the road between Nijmegen and Utrecht/ Zutphen split. In 1579 Arnhem officially became the capital of the Guelders region and in 1585 became part of the Republic of the Seven United Provinces. It has traditionally been a centre of government.

The other, which Arntzen made, is in the collection of the Rijksmuseum.

Probably given the absence of trade and industry, the output of Arnhem gold- and silversmiths has never been extensive. City accounts show that for important purchases people mostly turned to renowned Hollandish masters. Silver from Arnhem is consequently quite rare.

The potpourri holder Johannes Arntzen made in 1775 is executed in Louis XV style. The plain hemi-spherical bowl, with a round foot, has a thickened openwork rim which—like the openwork lid—is decorated with rocaille motifs incorporating flowers and shells. The lid has a small moulded knob. This is one of the two known examples from this city. The other, which Arntzen made, is in the Rijksmuseum collection.

Johannes Arntzen was born in Zutphen around 1732 and died in Arnhem after 1807. He probably spent his apprenticeship in Zutphen, where he lived until the notice of his intended marriage to Catharina Steenhouwer was published in 1757. This could explain why he made potpourri holders in the same style after Zutphen models. In 1757 he became a citizen of Arnhem. In the same year, guild members complained to the magistrate because Arntzen was calling himself a master silversmith although he was not enrolled in the guild. Arntzen declared before the court that he had already worked with a master for seven years. That was not enough, and he had to work for an Arnhem master for another three years. In 1761 he finally became a master. He lived for a while in Rhenen and in Velp, where he married his second wife, Mechtelina Bastiaan, in 1767. In 1762 and in 1773 he is registered as an aanwerpeling of the Utrecht Gold- and Silversmiths’ Guild. This concession meant that a master could have his pieces assayed in the Utrecht assay office at reduced guild fees, but did not have to live in the city. From 1798 onwards, he was an assay- master and kashouder, a shopkeeper in gold and silver objects.

Medemblik is the oldest city in West Friesland, but played a much less important role than nearby Hoorn and Enkhuizen, both of which had a chamber of the Dutch East India Company. The city grew up on the south bank of the Medemelacha, the present-day Middenleek, in the eighth century. Medemblik derived its prosperity from the timber trade and Baltic shipping. The key to its great prosperity was the urban expansion in Medemblik between 1590 and 1650, when the docks—the Oosterhaven, Westerhaven and Pekelharinghaven—were built.

The trade in timber, shipped from Norway and the Baltic region, was an important economic mainstay. This wood was destined for the building of houses, ships and sea defences, for which there was an increasing demand. The Medemblik guild was not established until 1785. Eighteenth-century silver with a Medemblik assay mark is therefore extraordinarily rare.

Van Sittert made this potpourri holder in 1788. It is one of the two pieces of its kind made outside the region of the IJssel towns. The model bears a strong resemblance to a potpourri holder made by the Zutphen silversmith Willem Carel van Meurs four years earlier. The plain round stepped foot supports a completely plain bowl with a band of refined openwork and engraved C scrolls with entwined vines. On the rim there are cast C scrolls with rocaille ornaments between them. The domed round lid is completely openwork with C scrolls and latticework. On top of the lid is a flower with four leaves on the stem.

Although at first glance it seems quite remarkable that a silver potpourri holder should have been made in North Holland, the explanation lies in Van Sittert’s background—he was born in Zutphen in 1760. He moved several times and worked as a silversmith in Hoorn until 1785. When silver assaying came to an end there, he moved to Medemblik, where the silversmiths’ guild was established that same year, and worked there until 1789. His first wife died in 1792 and in 1793 Van Sittert married his second wife, Gerarda Wilhelmina Ageron, who died the following year. His third marriage, in 1797, was to Margaretha Nieuwenhuijzen, who had been born in Haarlem. From then on they lived in Utrecht, where he was registered as a bookseller. He died in Velsen on 18 March 1823.

Lamberts’s potpourri holder is marked with the Zutphen assay office mark, the date letter 5B for 1752 and the maker’s mark SL for Salomon Lamberts.

The potpourri holder from Arnhem is marked with the date letter A and the maker’s mark IA for Johannes Arntzen (twice)Van Sittert’s potpourri holder is marked on the underside with the Medemblik assay office mark, the Dutch lion, the date letter D for 1788 and the maker’s mark DWS for Dirk Willem van Sittert. There is also the 1795 tax stamp for Utrecht on the underside. 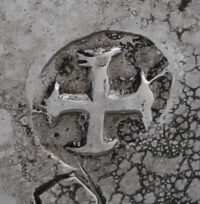 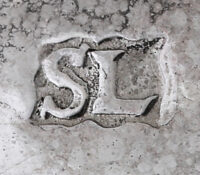 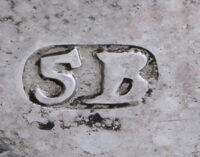 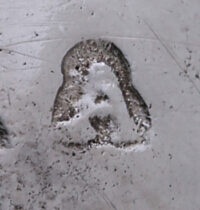 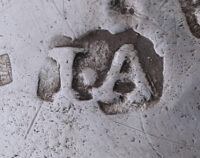 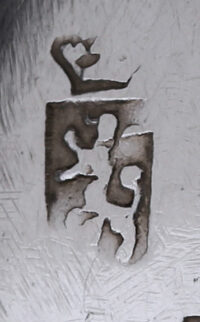 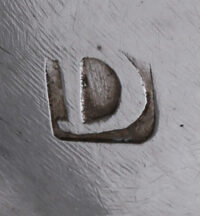 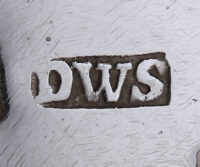 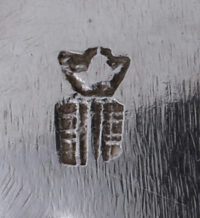