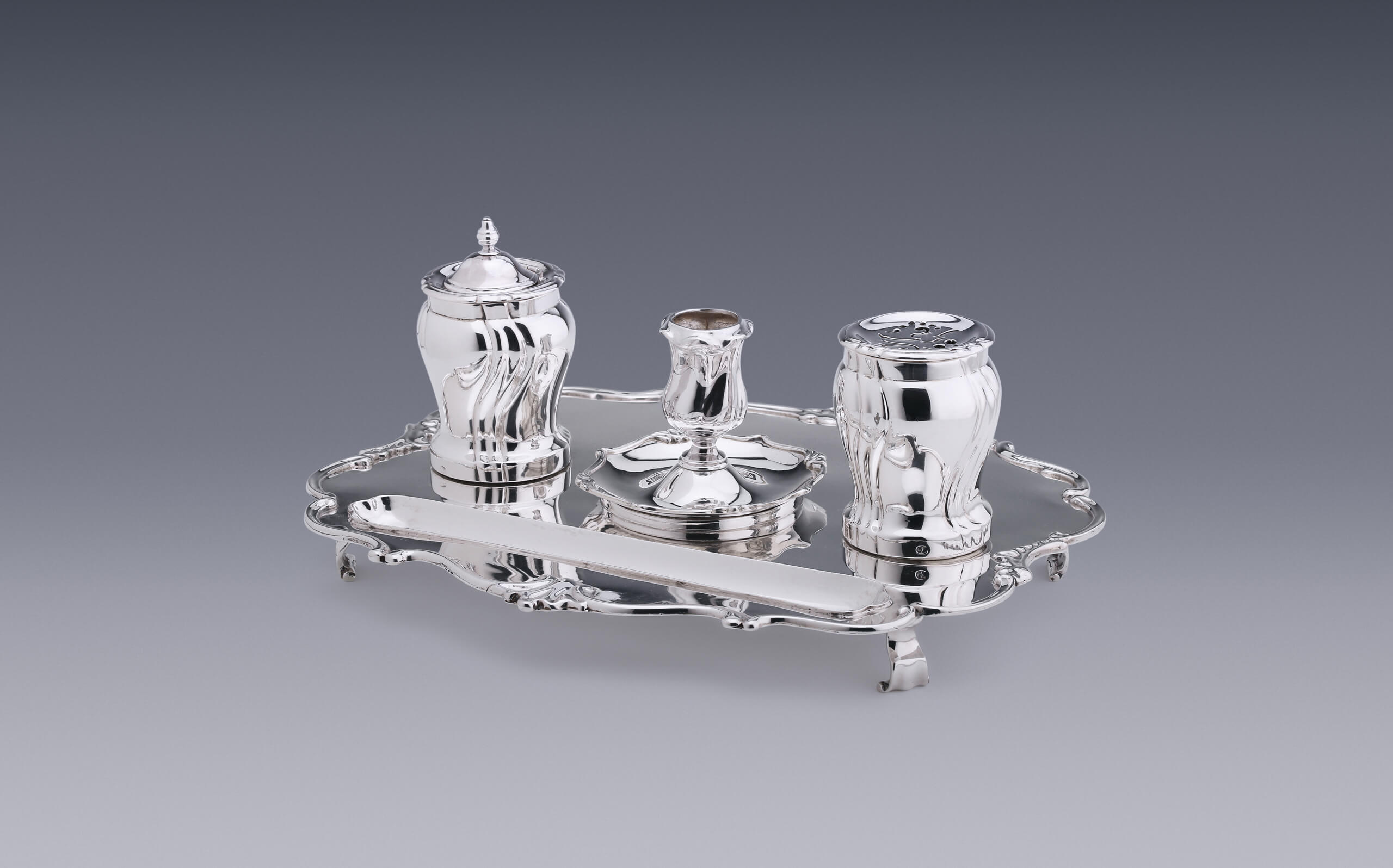 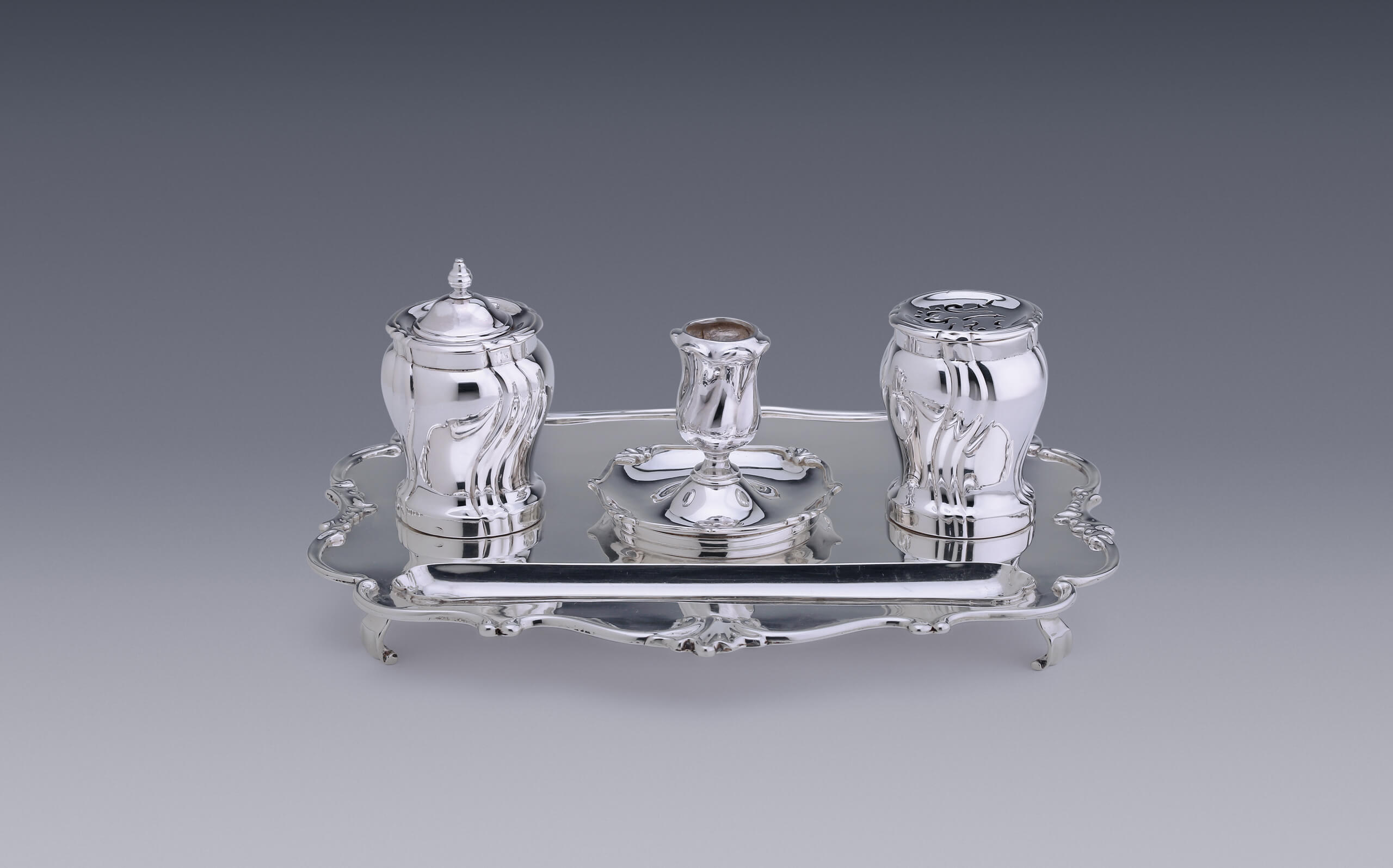 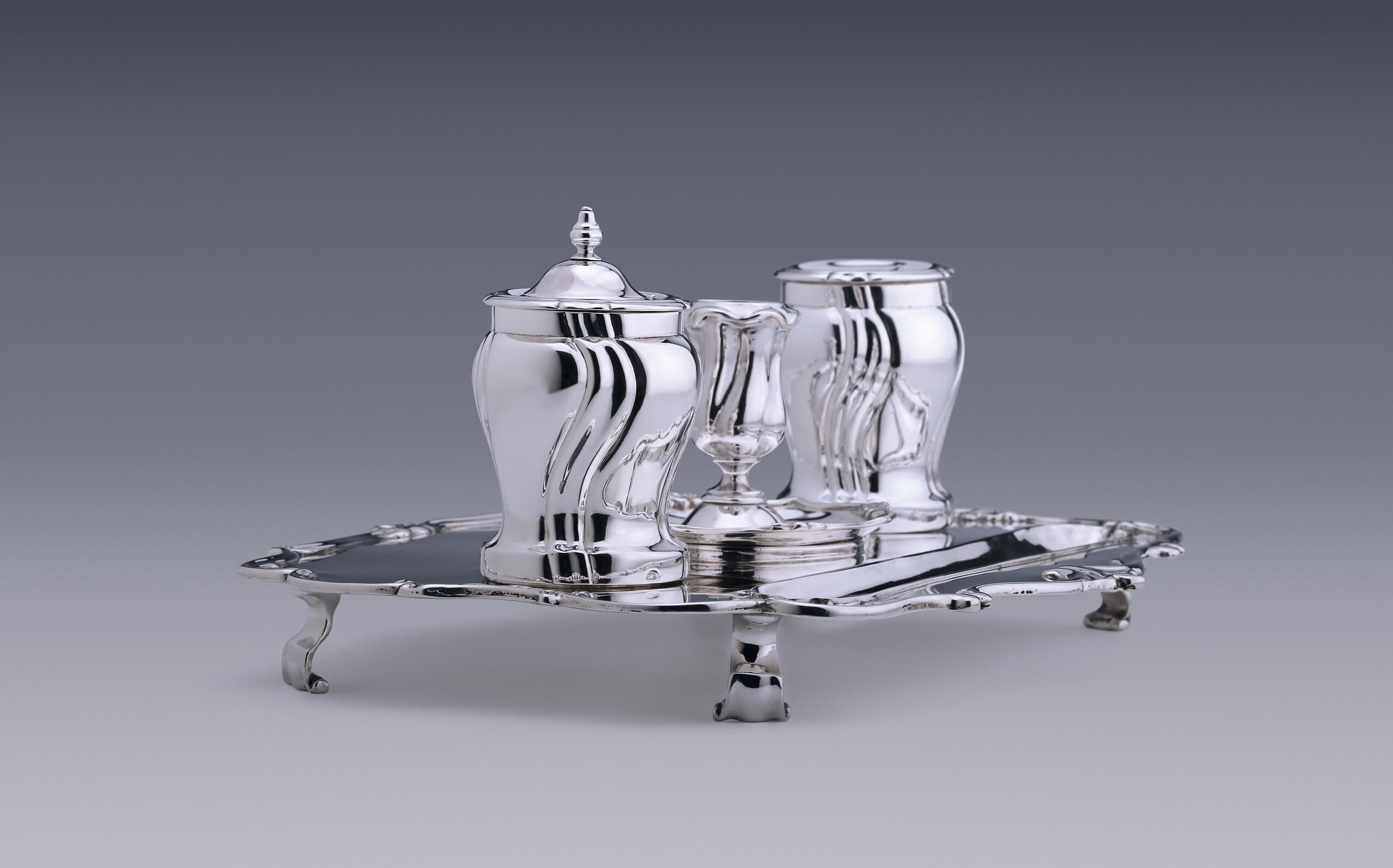 This ink stand by Rudolf Sondag is one of the largest known Dutch silver examples from the eighteenth century, and they are extremely rare. It is also one of the three examples known to have been made in Rotterdam.

This large ink stand consists of an oblong tray with a rococo rim, decorated with cast C-shaped scrolls and rocailles. The tray stands on four scroll feet and has three circular indentations on which stand an inkwell, a sand caster and a candlestick. In the length of the tray there is a groove to hold a penknife or a pen. The inkwell and the sand caster stand either side of the candlestick and have a twisted shape, entirely in line with the prevailing fashion. Under the candlestick there is a hollow compartment in which to keep sealing wax.

Ink stands appear with some frequency in seventeenth-century Dutch portraits of civic guardsmen and the governors and governesses of charitable institutions. They are almost always depicted as dark grey, which makes it likely that they were made of pewter. In any event, no silver ink stands from this period have survived. The earliest known surviving examples date from the first quarter of the eighteenth century. They are often quite small and are sometimes part of a dressing table set. These ink stands usually have an oval or oblong tray holding an inkwell and a sand caster.

The earliest known ink stand of this large size was made in The Hague in 1703. We know, so far, of seven large silver ink stands made around the mid-eighteenth century in the then prevailing Louis XV style. They were mostly made in The Hague, Rotterdam and Middelburg.

The candle was used as lighting and also
to melt the wax used to seal the letter.

At this time, ink stands comprised an inkwell and a sand caster, with between them a candlestick or a bell to summon a servant when a letter was ready and had to be delivered. The candle was used as lighting and also to melt the wax used to seal the letter. Towards the end of the eighteenth century, ink stands became smaller again and blue or clear glass with silver mounts was used for the inkwell and the sander.

Until the late Middle Ages, monks were almost the only people in Europe who could read and write. The written language was Latin. Only a small proportion of the elite were literate. Around the second half of the fourteenth century, a new school of thought emerged in Italy among scholars, with renewed interest in Classical Antiquity. Humanistic ideas began to evolve again. The focus on religion in the Middle Ages shifted to the promotion of civic virtue and the development of mankind through education based on classic literature.

It was only in this way that man could achieve his full potential. This was in his own interest and that of the society in which he lived. In the fifteenth century the new thinking and approach spread rapidly throughout Europe, fuelled by Gutenberg’s ground-breaking invention of printing around 1445. There was a veritable media revolution and as the fifteenth century progressed literacy grew among the aristocracy, merchants and magistrates. This trend continued in the sixteenth century, to which the Reformation also contributed: one of Luther’s theses was that everyone should be able to read the Bible for themselves and live according to its precepts.

Writing in the Netherlands

From the seventeenth century onwards, a good deal was invested in education in the Netherlands. It was essential that people could read and write in order to function in the growing economy. It was even a precondition if one wanted to be apprenticed to a guild. It was regarded as so important that even foundlings were taught to read and write. The literacy rate in the Republic was extraordinarily high. In the eighteenth century, however, the downturn in the economy brought about change for the worse in education and a corresponding decline in reading skills.

The earliest inkwells date from Ancient Egypt, where the members of the highest caste got their subordinates, the scribes, to write on papyrus scrolls and stones. Bowls, jugs, glass bottles, as well as shells and the horns of cows and goats were used to hold ink.

From the fifteenth century onwards, more and more people became literate and the supply and demand for inkwells rose. The first luxurious ink stands, consisting of an inkwell, a sand caster and a penknife on a tray, date from that century. Ink was kept in the inkwell, salt or sand was used to help the ink dry more quickly and absorb surplus ink. The penknife was used to sharpen the point of the quill pen or scratch ink blots off parchment or paper.

The ink stand was an essential part of the studiolo, the study for clergy, magistrates and rulers. The one for clergy and magistrates was simply furnished, but the royal studiolo was very lavishly decorated.

Until around 700 CE, pens were made from bamboo and reed. In time, these pens were replaced by quill pens. In the eighteenth century, when this ink stand was made, people mostly used quills for writing.

They were made from the flight feathers moulted by geese in the spring. Feathers from the left wing were preferred because the slight curve in the feather meant that the pen sat more comfortably in the hand of the writer, most of whom were right-handed. Swan’s feathers were even better for writing with, but were scarcer and consequently more expensive. To prepare a quill for writing, it was trimmed at an angle and the barbs were trimmed off. The dried membrane inside the shaft was removed and the quill then had to be tempered. It was soaked in water until it looked gleaming white. The part that had been soaked was then thrust into a container of sand at a temperature of around 170-180 degrees. The sand had to be hot enough for the pen to hiss, but not split. Once the tip had become translucent, the extra scale was scraped off the pen and it could be cut to a point. This tip would pick up the ink for writing.

Rotterdam’s history goes back to 1270 and it was granted city rights in 1340. Initially, fishing was its primary source of income, but docks were soon built and it became an important trading centre for agricultural produce and wool. Since then, the city has grown into one of the world’s major ports. Until the seventeenth century, though, it remained a relatively small town and only a few silversmiths lived and worked there. In the course of that century, Rotterdam flourished and grew to some 50,000 inhabitants. This was all related to trade and the vessels of the Dutch West India Company that sailed from the port. In the eighteenth century, virtually all the trade with England went via Rotterdam, and not Amsterdam. The growing prosperity brought about an increase in the demand for silver objects, particularly from the wealthy bourgeoisie.

The Rotterdam silversmith Rudolph Sondag was born in 1726. He worked from 1746 until his death on 21 November 1812. He was married to Johanna van Essen and lived in Hoogstraat near Lamsteeg. Sondag was a very productive silversmith. Remarkably, the quality of the pieces on which his maker’s mark appears is very varied. It is possible that pieces were also made by apprentices and Sondag only guaranteed the silver content by putting his mark on them. Works with his maker’s mark range from simple little salts to showpieces such as chestnut vases and candelabras. We also know of beautiful openwork bread baskets, plain trays and elaborately chased ceremonial silver for civic institutions and churches by him.

Alongside his work as a silversmith, he was also kashouder, a shopkeeper in gold and silver objects. He held various official posts in Rotterdam. His son, Johannes Petrus Sondag, followed him into the business. As well as this ink stand, we know of two other, very similar ink stands by Sondag—one made in 1773 that is now in Museum Boijmans van Beuningen, and one dated 1772 in a private collection.

Marked on the underside with the Rotterdam assay office mark, the Dutch lion, the date letter b for 1760 and the maker’s mark of a sun for Rudolf Sondag. 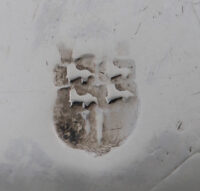 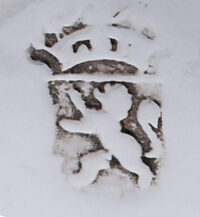 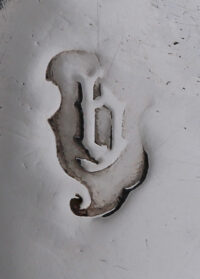 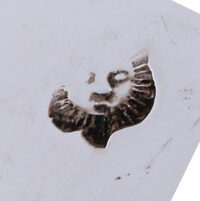