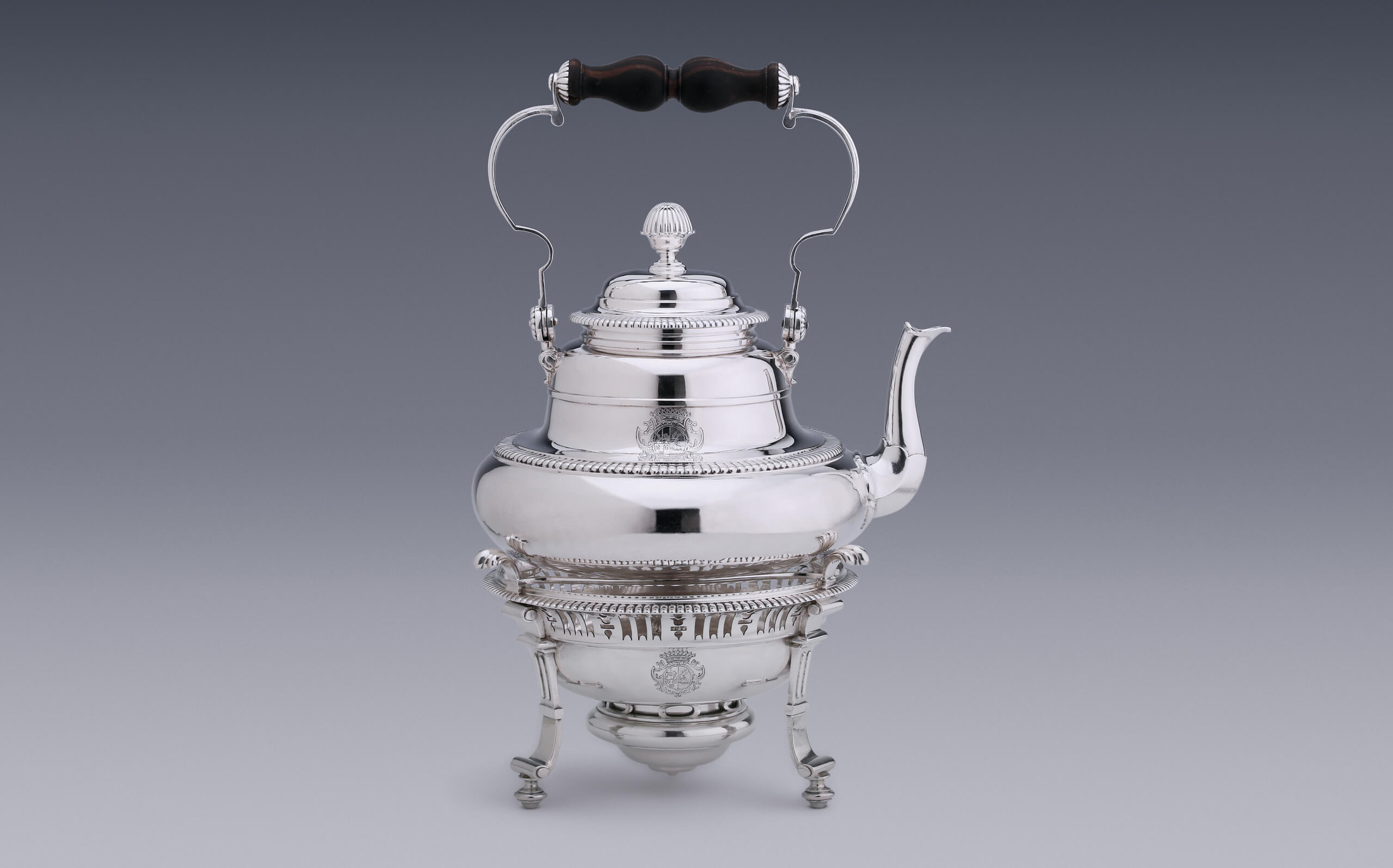 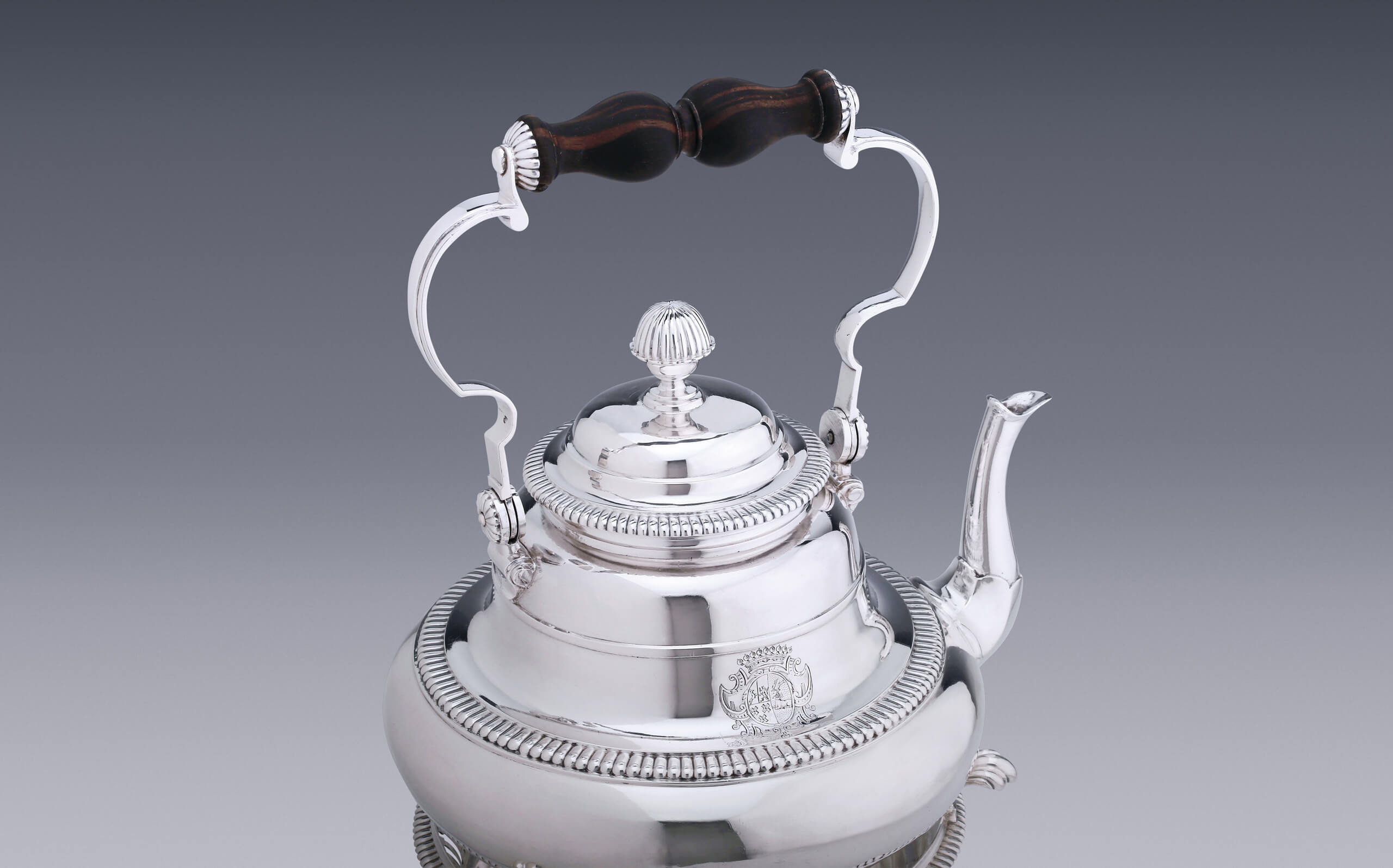 A Silver Water Kettle on Stand

This elegant water kettle on stand or ‘bouilloire’ is one of the earliest known Dutch silver examples. The alternating convex and concave form of this large kettle is very typical of the tea kettles made in The Hague in the first quarter of the eighteenth century, as is the repetition of decorative motifs.

The combination of these arms was carried by Jan van den Bosch and Cornelia Scott, who gave notice of their marriage on 16 February 1720

The kettle sits on a stand with a spirit stove which has a burner with a removable holder for the wick. The kettle is held in place on the stand by three scrolled supports. The bulbous kettle is nipped in above the spout attachment. The hinged handle on the kettle has a turned wooden grip. Stove, kettle and lid are divided into horizontal sections separated by moulded bands and gadrooning.

These gadroon edges are repeated on the knob of the separate lid and even on the sides of the handle hinges. The spirit stove has a decorative openwork border around the burner and below the upper edge to ensure a supply of air to the burner. The three tall, gently curved legs are decorated with scrolls and fluting, and stand on knobs. Arms of alliance are engraved on the spirit stove and the kettle.

Arms of alliance are created on the occasion of a marriage and consist of the family coats of arms of the two spouses. The arms on this kettle have a collared deer recumbent on the right. These are the arms of the Scott family, originally of Amsterdam. The husband’s arms on the left, a lion with a deer and three St Andrew’s crosses, are those of the Van den Bosch family. The combination of these arms was carried by Jan van den Bosch and Cornelia Scott, who gave notice of their marriage on 16 February 1720.

This was the second marriage for both spouses. Jan van den Bosch married for the first time in 1718, when he was thirty-five. His bride was Albertina Constantia Pater, who died the same year. Cornelia’s first marriage took place in 1717. Her husband, Gerard Beelaerts, died a year later. Jan van den Bosch was born in The Hague in 1673. He became a Captain with the Amsterdam Admiralty in 1698. His second wife, Cornelia Eliana Scott, was the only daughter of the wealthy merchant and banker Everard Scott (1639-1682). Four years after their wedding, the couple moved from Kloveniersburgwal to Keizersgracht. As well as this canal-side mansion in Amsterdam, they owned the country estate of Westerveld near Driehuis. In 1866, when the buildings on the estate had been demolished, Westerveld House was built there. Part of the estate is still in use as a cemetery. Jan van den Bosch died on 11 February 1724 and was buried in the Westerkerk.

The history of tea drinking in the Netherlands begins in 1610, when the Dutch East India Company brought the first consignment of Chinese tea from Batavia (present-day Jakarta) to the Republic. At first, people ascribed all sorts of medicinal effects to tea and thought it was a miracle cure for numerous ailments. It was extremely expensive and only a small and very wealthy elite could afford to drink it in the first half of the seventeenth century. Following the arrival of the first large shipment of tea in 1667, the price came down and more people could afford it. It was not until the end of the seventeenth century, however, that drinking tea came into fashion and it was drunk on a wide scale —not for any medicinal properties, but simply because people enjoyed it and it had become a social event.

When more people could afford to drink tea after large shipments began to arrive in 1667, those who had the means commissioned costly silver objects to show off their status and good taste. Around 1700 more and more pieces were conceived for the tea ritual.

Alongside small silver teapots there were tea caddies and kettles. Very strong tea was brewed in the pots. A small quantity of this strong tea was poured into the teacups and then diluted with hot water from the kettle until it was the right strength.

We know of only three other pieces bearing his maker’s mark; a 1691 tea caddy, a pair of candlesticks made in 1699 and another pair dated 1706.

This kettle is illustrated in volume II of J.W. Frederiks, Dutch Silver, under no. 493, where the silversmith is given as Elias Taal. However, the maker’s mark consists of the initials P.T in a scalloped surround. Although this maker’s mark is not illustrated in earlier literature, Pieter Tamé is the only known silversmith with these initials working in The Hague during this period. He was born on 13 November 1663, the son of Pieter and Jannetje Rietvelt. Tamé was first married to Catherina Seivin. He married his second wife, Dorothea Middelbeeck, on 19 February 1690. He became a member of the Hague guild on 10 February 1687 and in 1707 was recorded as a lieutenant in the civic guard. Tamé lived in Kalvermarkt and later on the Nieuwe Haven. We know of only three other pieces bearing his maker’s mark —a 1691 tea caddy, a pair of candlesticks made in 1699 and another pair dated 1706. This tea kettle and stand dating from 1708 is the fourth currently known piece by him.

Marked on the underside of both the stand and the kettle with the Hague office mark, the Dutch lion, the date letter K for 1708 and the maker’s mark P.T in a scalloped surround for Pieter Tamé. 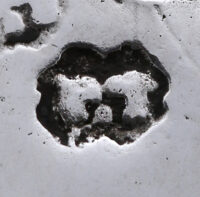