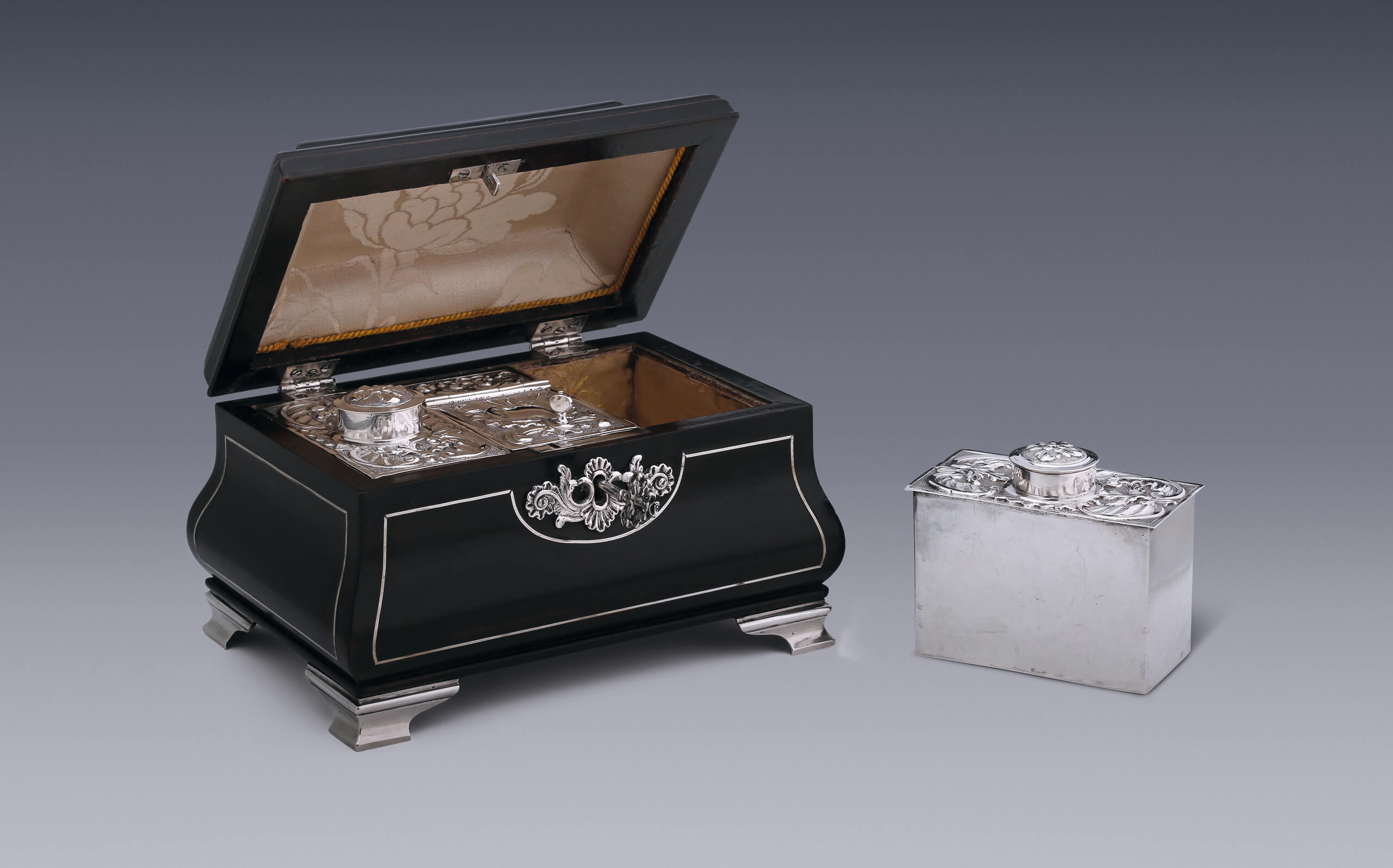 Although this tea chest is completely symmetrical, the powerful and elaborate decoration in the silver places it firmly in line with the prevailing Louis XV or Rococo style that was in fashion in the Netherlands between around 1740 and 1775. The asymmetrical ornaments are derived from motifs in nature, mainly rocailles alternating with floral and foliar patterns. The elegant Louis XV style offered many possibilities in a broad range of domestic objects and was widely used in the Netherlands.

This charming tea chest in ebonized wood is decorated on all sides with a finely inlaid smooth silver line that follows the contours of the chest. The fittings, the handle and the feet are made of silver. The chest contains two silver tea caddies and a mixing canister. The two rectangular tea caddies each have a round cap in the centre of the top. The mixing canister has a flat, hinged lid that can be locked by turning the key. There is a silver lock plate on the front of the chest, with the original silver key. The lid is attached to the chest with silver hinges.

Examples from ’s-Hertogenbosch
can even be described as rare

Both the fittings of the chest and the tops of the three caddies are decorated with bold rocaille motifs. On the caddies, these chased ornaments are raised on matt surrounds. The chest is lined with pale yellow silk with a floral design. It stands on four curved silver feet.

One of the three known examples

Wooden tea chests like this one were made in several Dutch cities in the second half of the eighteenth century. The tea caddies they contain were often made of base metal such as tin or copper. There are also variants where only the top of the tea caddies is made of silver and the other sides are base metal. Chests with all silver tea caddies are found considerably less often in the Netherlands; examples from ‘s-Hertogenbosch can even be described as rare. This tea chest is one of the three known examples with silver tea caddies made in ‘s-Hertogenbosch in the eighteenth century.

The city, founded in 1185 by Duke Henry I of Brabant, grew steadily in the centuries that followed. With 24,000 inhabitants, it was one of the largest and most prosperous cities in the Dutch Republic. There were many silversmiths and goldsmiths working in the city and the guild was fully established in the fifteenth century, which is relatively early. The city’s heyday came to an end in 1567, at the outbreak of the Eighty Years’ War, when many citizens left for political reasons. The war was disastrous for the city, and the economy and the number of inhabitants collapsed.

There was something of a revival in the second half of the seventeenth century, and on average there were some thirteen silversmiths working in the city—a number that remained virtually unchanged for most of the eighteenth century. It was not until around 1770 that the number of silversmiths began to rise towards twenty. In comparison to Amsterdam, where three hundred silversmiths were active, this is still a very small number. The churches and guilds were the ‘s-Hertogenbosch silversmiths’ principal clients and the silver from ‘s-Hertogenbosch consequently tends to be ecclesiastical. Secular objects in silver, like this chest, are significantly rarer.

Although tea first arrived in the Netherlands in 1610, larger consignments did not become available until around the middle of the seventeenth century, when demand was boosted to the extent that price rose to as much as a hundred guilders a pound. At the end of the seventeenth century, tea was therefore a highly prestigious drink and we see the first silverware for keeping and serving it appear in the Netherlands. People who could afford it would commission a beautiful silver tea caddy to keep it in, or—in exceptional cases like this—a tea chest with a number of caddies. In the 18th century, exotic chests in filigree silver were brought to order from China on the vessels of the Dutch East India Company and fitted with silver interiors and tea caddies by Dutch silversmiths. In the Dutch Republic itself, cabinet-makers made wooden tea chests like this example. The carcase, usually oak, was veneered with costly woods in elegant patterns and finished with brass or, as here, even silver caddies and fittings.

In the eighteenth century, different qualities of tea came on to the market, so that far more people were able to afford it. Depending on the processing, the same shrubs—Camelia theifera—yielded green or black tea. At first, green tea was more popular in the Netherlands, but in the course of the eighteenth century people far preferred black tea because they thought that it had less harmful properties.

The very finest sort of black tea was Pekoe, a blend of young, tender leaves with white tips that produced a golden yellow infusion. Souchong from brown and purple leaves had the fragrance of melon and a sweet flavour. Pochon produced a greenish yellow infusion with a fragrance tending towards amber. The Chinese classified Kapegongo and Boey—made with broken leaves—as the most inferior types of black tea, but they accounted for a significant proportion of the black tea imported into Europe. One could flaunt one’s status by serving only the better qualities, which were still extremely expensive, and it was the height of elegance to make your own blend, for which the blending caddy in this tea chest could be used.

Wijnandus Greven became a member of the silversmiths’ guild in ‘s-Hertogenbosch on 23 October 1760. He worked until his death in 1788. In the course of his twenty-eight-year career he trained ten apprentices in his workshop.

It was the height of elegance to make your own blend

There are several known pieces by Greven himself; these are chiefly ecclesiastical objects, such as a pair of altar bells dating from 1762/63, a missal cover from 1765/66 and a chalice made in 1773/74. Like the silver on this tea chest, they are all Louis XV style. Greven made a similar tea chest in 1774/75, currently on loan from the Jeroen Bosch Hospital Foundation to the Noordbrabants Museum. The decoration of the silver on that piece is considerably more subdued.

All three tea caddies are marked on the underside with the maker’s mark WG in a scalloped outline for Wijnandus Greven. There is no date letter or town mark in the silver, from which we can deduce that this chest was never presented to the guild for assay. On the basis of the chest’s symmetrical form and the silver feet in combination with the rocaille motifs in the silver, alternating with symmetrical foliar and shell designs, we date this tea chest certainly no later than 1770. 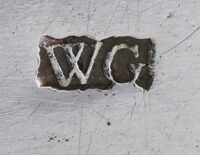