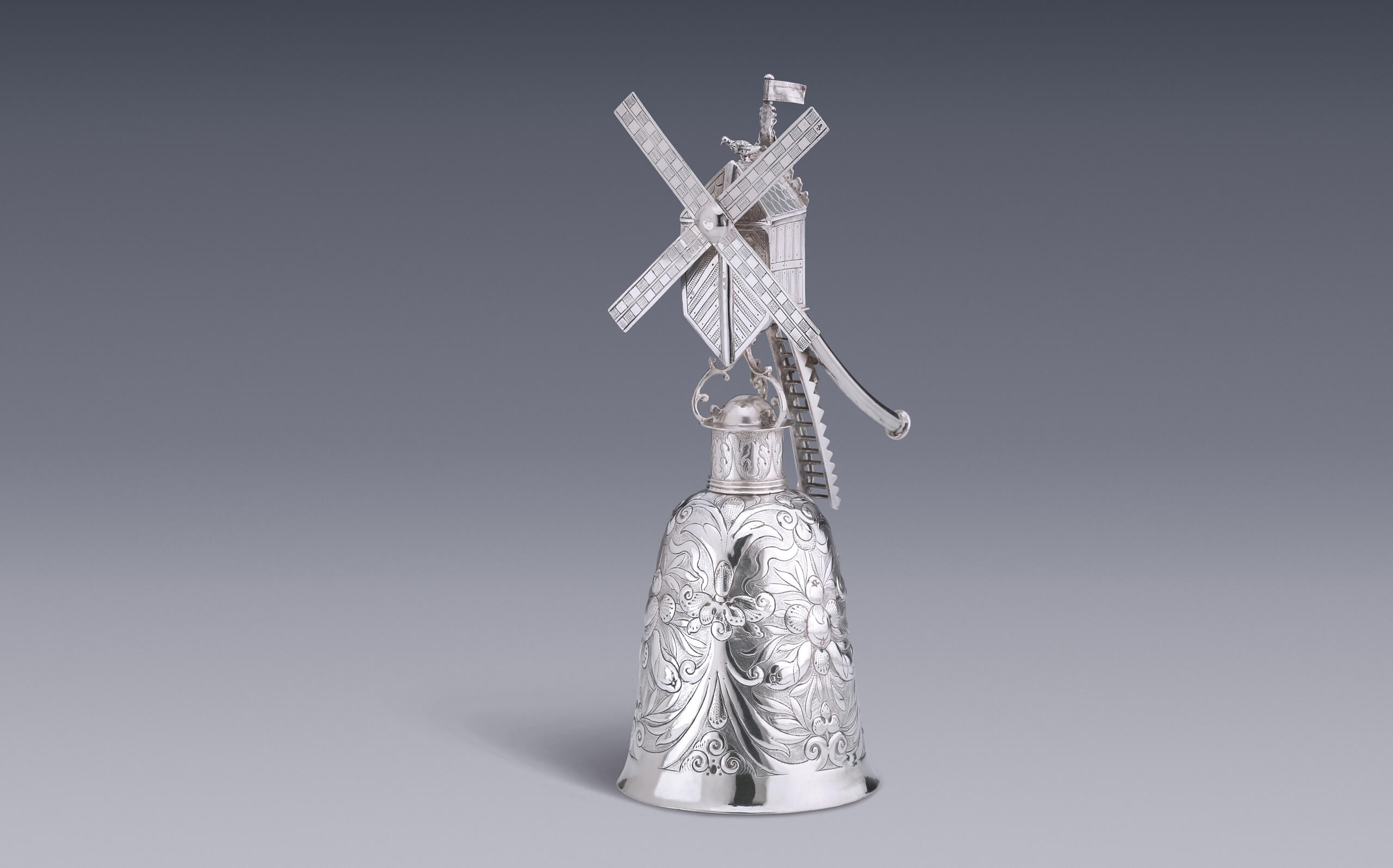 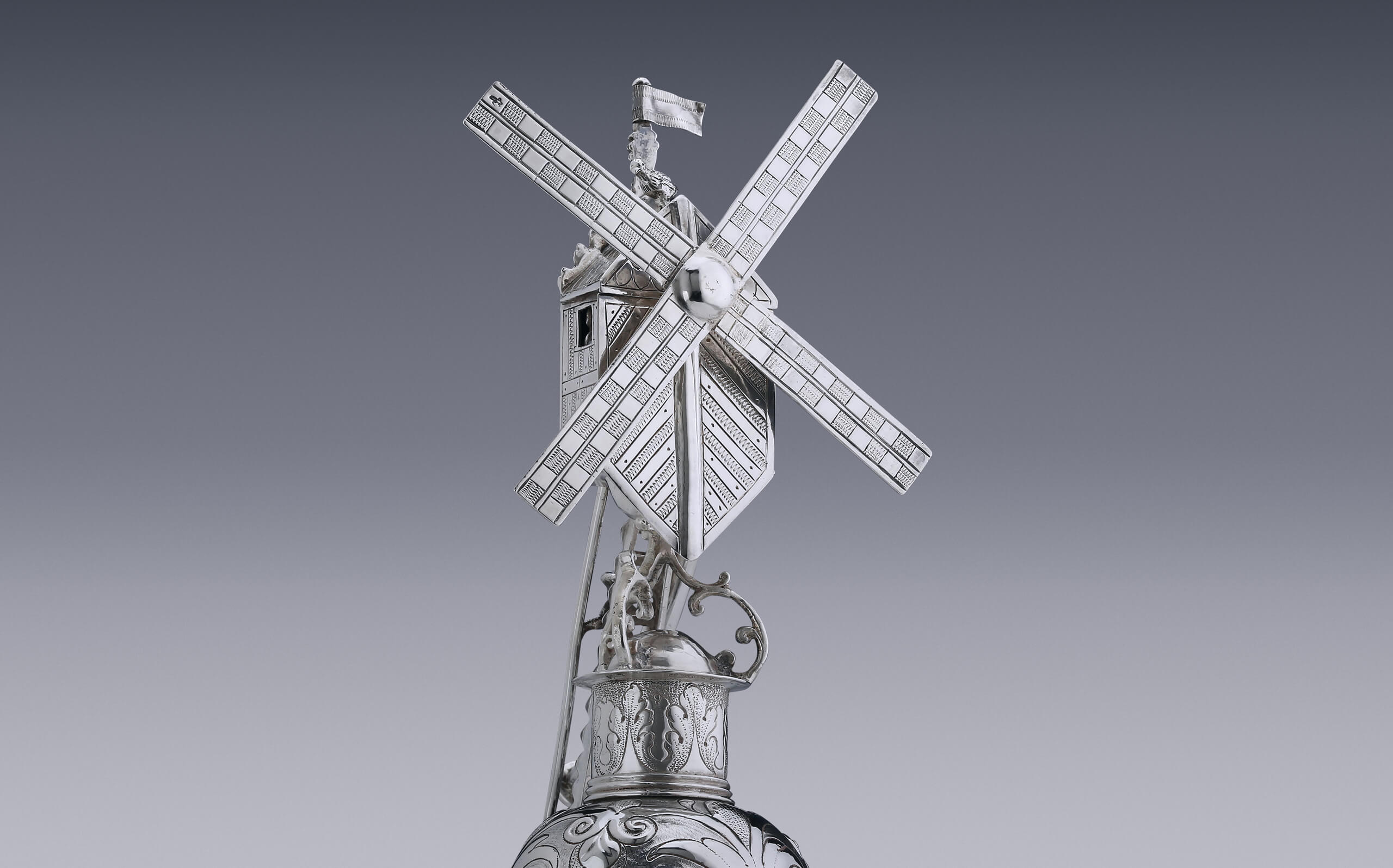 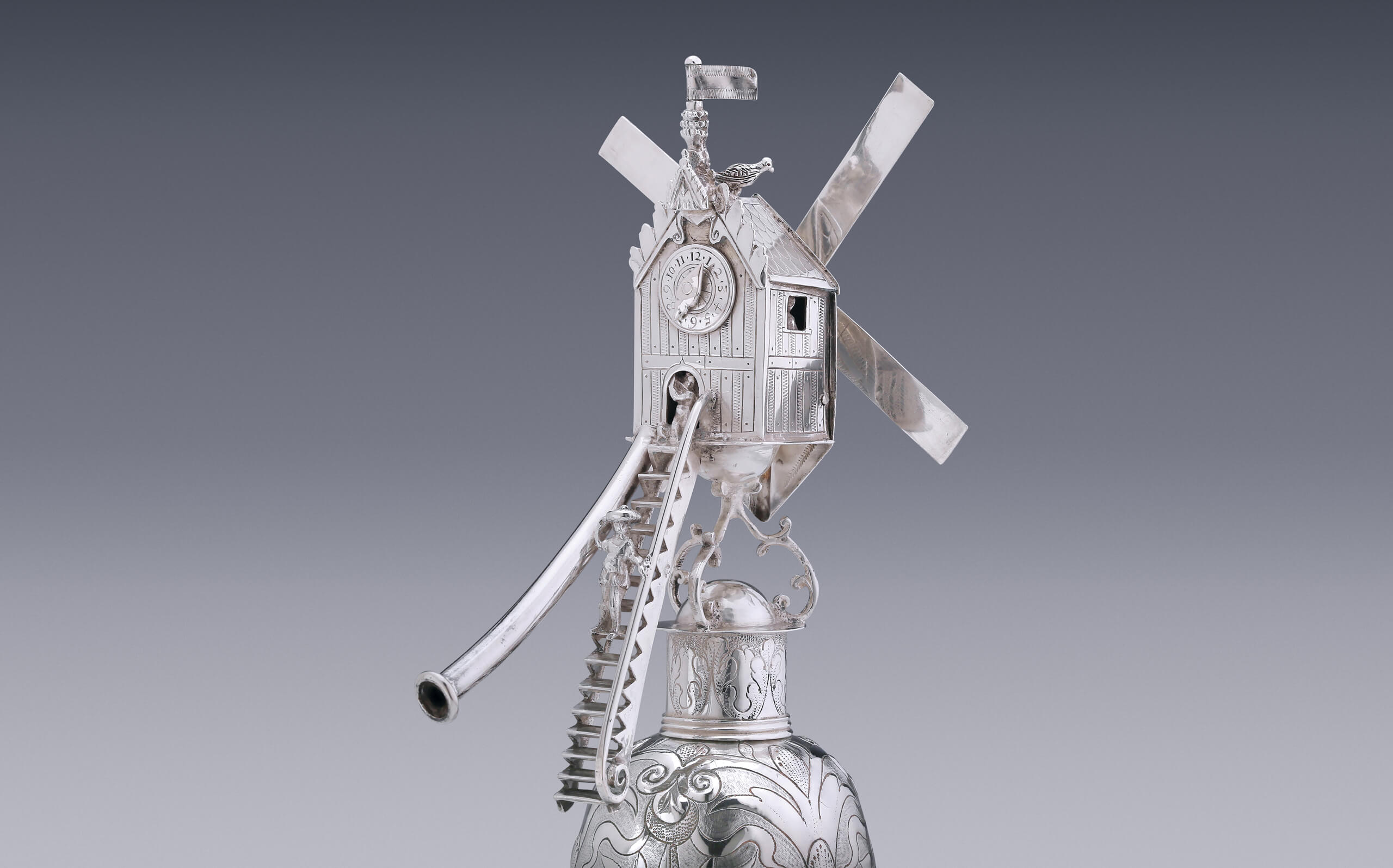 The windmill cup owes its name to the windmill mounted on the goblet. A windmill cup is a form of a drinkuit, a silver or glass cup that had no foot; it was a goblet that could only be put on the table upside down. A drinkuit could be one of many shapes and had to be drained in one. The idea was to encourage drinkers to down more than they could handle.

The base of this windmill cup is a bell-shaped goblet with a plain lip. The goblet is elaborately decorated with chased clusters of fruit and leaves between strapwork on a partly matt ground. On top of the cup is a cylindrical connection with a domed top, on which three open scrolls support the windmill. The body of the mill is decorated with a naturalistic engraved pattern of planks. The sails are connected by an axle to the hands on a clock face on the back of the mill. Under the dial there is a blowpipe and a ladder, which a miller descends with a sack of flour on his shoulder. A figure stands at the open door and another sits at the window. There is a bird on the ridge of the roof. An ornament sporting a flag tops the rear gable.

We must drink to that!

For centuries, drink played a huge role in society. At parties, on special occasions, at weddings, funerals, official dinners and other social gatherings, every opportunity was seized to raise a toast. The upper classes, in particular, never missed a chance to bring out the glasses, goblets or tankards. It is clear from the many paintings of elegant al fresco parties, civic guard banquets, interior scenes in taverns and peasant fairs that people in the seventeenth century could certainly put it away. Every day, young and old, rich and poor, quenched their thirst with small beer—a diluted ale with a low alcohol content. Water was often so badly contaminated that it was unsafe to drink. The ordinary man often drank brandy. Only the well-to-do could afford exotic, expensive sweet wines—the ones that were imported from the Rhineland, Bordeaux or the Loire.

Drinking games were a favourite pastime on festive occasions. Alongside ceremonial goblets and ordinary drinking vessels, around the end of the sixteenth century onwards various trick or puzzle jugs began to appear. These are cups that have a surprise or playful element and often require the drinker’s ingenuity or dexterity. Among them were windmill cups.

Rules of the game

The windmill cup rapidly became a hugely popular drinking game in the Netherlands. To play the game, the cup or goblet was turned over and filled with wine. The player had to blow through the pipe so that the sails and the hands on the dial rotated. The cup had to be drained to the bottom before the sails and the hands of the clock came to a stop. If the drinker failed, he had to read the figure indicated by the clock when it stopped. It was agreed beforehand what the figures meant. It could be how many glasses had to be drunk as a forfeit, but there were countless variations. The loser was the first person to drop out. During the game the players sung a rhyme: 'Heij! Zoo draait de Meulen, de wijn komt van Keulen, van Keulen komt de wijn, laat ons drinken en vrolijk zijn’.

Only the elite, wealthy citizens, the aristocracy, the guilds and town councils could afford costly cups like this. Windmill cups appear very early on in the art cabinets of rulers and royalty. Johannes Maurits, Prince of Orange, had an engraved glass dating from 1595 with a 1585 silver windmill in his collection to commemorate his appointment as the Marquis of Bergen-op-Zoom. Early silver and parcel gilt examples in the sixteenth century often came from the German silversmithing centres of Nuremberg and Augsburg. From the first quarter of the sixteenth century on, they mostly came from Antwerp. In the seventeenth century windmill cups became all the rage in the Northern Netherlands, too, and they were made in many places. They were still being used until well into the eighteenth century and examples can be found from Flanders to Poland.

Although many of them must have been made, a lot were broken over the years – probably while they were being used in the seventeenth century. The more rounds of the windmill cup game were played, the clumsier the players became. We currently know of only sixty-four surviving examples from the Northern Netherlands. Some consist of a silver mill with a glass goblet and some, like this one, are all silver. This windmill cup by Jan Diamant is the only known example from Haarlem. In shape and execution, it bears a striking resemblance to the goblets made by Gerrit Valck (1591-1672), a well-known Amsterdam specialist in cast and chased novelty goblets, by whom nine windmill cups survive. Valck took his inspiration from model prints by Paulus II Flindt, a Nuremberg goldsmith and engraver from the 1593-1618 period. A series dating from 1594 tallies closely with Valck’s motifs and finish.

The Haarlem silversmith Jan Diamant, born in 1633, was the son of Hans Diamant and Metje Arents. He came from a family of silversmiths. Jan followed his father, Hans, his great-uncle, Pieter van Quickelenbergh, and his uncle, Michiel van Valckenborgh, into the trade. He married Magdaleentje Abrahams in 1656 and in that year was living in Grootheiligland, a street in Haarlem.

Marked on the lip with the Haarlem assay office mark, the date letter b for 1688 and the maker’s mark JD (mono- grammed) for Jan Diamant. 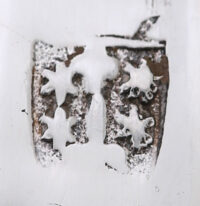 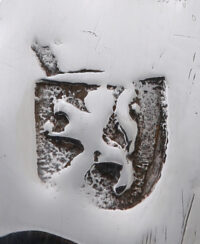 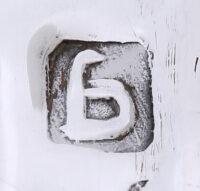 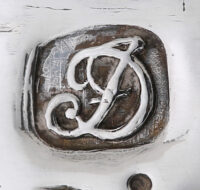