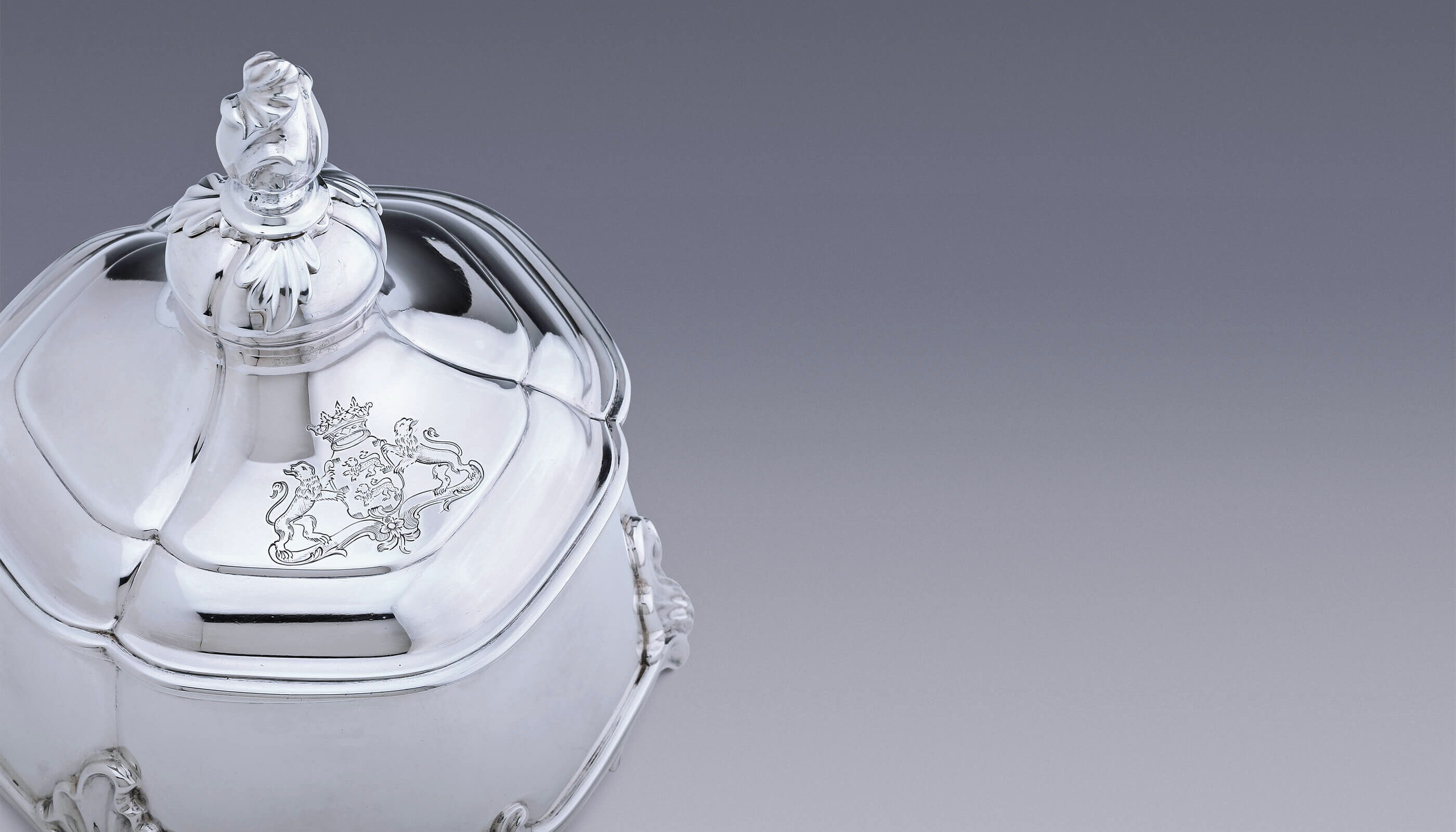 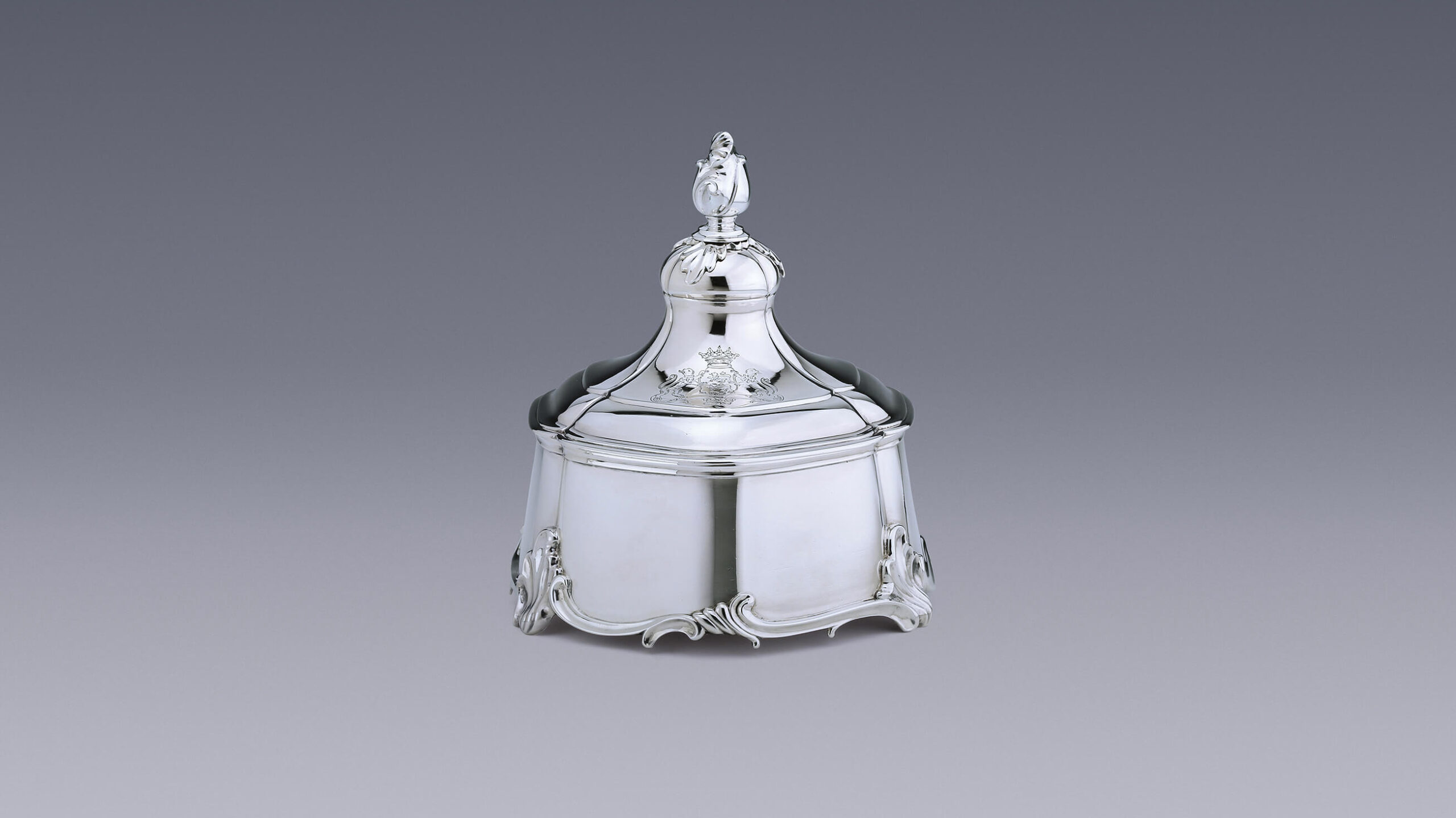 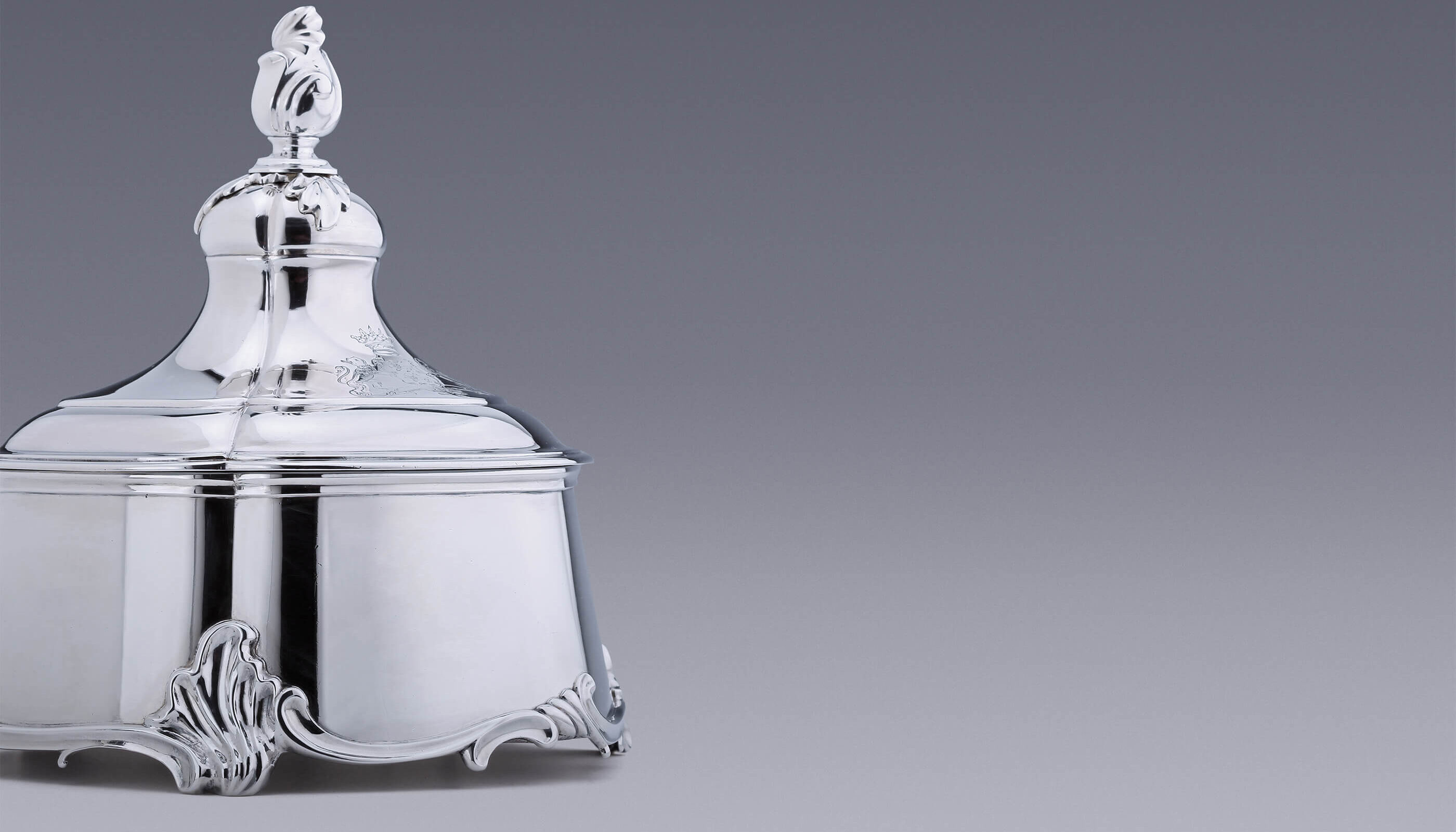 A Tobacco Jar for the Frisian Court

This extraordinarily elegant tobacco jar was made in The Hague by Leendert Brouwer in 1773.
The understated and highly sophisticated basic shape is a hexagon, with tapering, rounded sides that are completely plain. The moulded, cast border around the bottom edge has scrolls interrupted by three rocaille feet.
The raised plain cover is likewise hexagonal and, like the walls of the jar, is divided into three segments by three interrupted lines. There are three leaves on the hemispherical top. The knob, which can be unscrewed, is cast in the form of a twisting flame.
The graceful, asymmetrical style is typical of the Louis XV period, known as the Rococo. The ornaments contrast superbly with the completely plain surfaces of this chic tobacco jar.
The Great seal of the Province of Friesland is engraved on the cover, with two lions passant and seven billets in a crowned shield, flanked by two lions rampant, also known as the Lion Arms. The lions stand on a decorative motif with a flower.

The arms of the Province of Friesland has two variants—the lion arms and one with blue and white diagonal stripes with seven red seeblatts (water-lily leaves). The lion arms was pictured for the first time around 1404 and billets were added around 1430. The arms of Friesland engraved on this tobacco jar, with two lions passant and seven billets, dates from 1499. After Albert III, Duke of Saxony, took possession of Friesland and came to power, he was granted this coat of arms.
The seven billets refer to the seven medieval Frisian quarters—West Friesland, Westergo, Oostergo, Hunsingo, Fivelgo, Emsingo and Jeverland. These were independent regions along the coast from Alkmaar to the River Weser in Germany, which banded together in a defensive alliance against the Vikings. The fact that by around 1500 a significant part of these regions lay outside Friesland was apparently irrelevant. The lion arms with the seven billets was added as an escutcheon on Albert’s ducal coat of arms. It first appeared on official documents in 1504 and is still in use as the arms of the Provenance of Friesland. The variant with the diagonal stripes and seeblatts is now used solely on the Frisian flag.

The Court of the Frisian Stadholders

The Provincial arms on the cover tell us that this exceptional tobacco jar was probably made for the Frisian court. This court of the stadholders was housed in the Hofplein in Leeuwarden, which has been the capital of the Province of Friesland since 1504. The Frisian stadholders held court there from the end of the sixteenth century. Until the eighteenth century, the Counts of Nassau held the post of stadholder of Friesland. This Frisian branch of the Nassau family were the direct ancestors of the present Dutch royal family. The stadholder was the monarch’s representative or deputy. He ruled a given region in place of the monarch. As well as governing the area, the stadholder also had to command the army.

Inventories drawn up regularly in the sixteenth, seventeenth and eighteenth centuries reveal that the stadholder’s court in Leeuwarden owned an exceptionally large quantity of silver. Fashions changed and many pieces were melted down, so very little has survived. On the eighteenth-century inventories it is possible to establish where all these pieces were made. Curiously, the Frisian Stadholders owned relatively little silver by local and regional silversmiths. Many pieces came from Germany and England, but the Frisian court preferred to place new commissions in The Hague, where the international court style and particularly the trends in Paris were followed more directly. The latest French fashions arrived in The Hague first—and this was a matter not just of stylistic innovations but of the introduction of objects that were unknown in the Dutch Republic. The noble Frisian families maintained close contacts with the stadholder’s court, which also regularly commissioned silver in The Hague. The typical elegant, understated Hague style thus found its way to Friesland. The last Frisian stadholder, William IV, moved to The Hague in 1747, when he became stadholder of all the Dutch regions. From then on, the court in Leeuwarden was used as a temporary residence for the Nassau family.

Typical of The Hague

The sleek, gently curving lines of this tobacco jar, which bring out the reflective quality of the silver to best effect, are typical of the eighteenth-century silver made in The Hague. The style was copied by silversmiths in other towns and cities and is regarded as one of the most original and successful expressions of the Rococo in the Netherlands. Frisian noble families who had a house in The Hague or held government posts there preferred, like the Frisian court, to get their silver in The Hague. Provincial silversmiths then made pieces in the same style. In consequence, we see the Hague influence not just in Friesland, but also in silver from Arnhem, Nijmegen, Zutphen, Middelburg and Maastricht.
There was a remarkable unanimity in the way Hague silversmiths like Engelbart Joosten, Gregorius van der Toorn, Isaac Samuel Busard and Leendert Brouwer used natural foliar ornaments on often plain, unfussy pieces. It meant that silver services could easily be put together from the work of several different Hague silversmiths.

The Hague gold- and silversmith Leendert Brouwer married Maria van Can in the Catholic church in Oude Molstraat in 1760. On 20 October of the same year he was entered in the book of oaths. In 1800 he bought a house in Vleersteeg, selling it in 1804. In1808 he bought a house in St Annastraat. Most of Brouwer’s output was table silver and there are a number of examples of his work in the collection in the Haagse Kunstmuseum. This museum also has a rather later tobacco jar by Brouwer.

Marked on the underside with the Hague city assay office mark, the Dutch lion, the date letter B for 1773 and the maker’s mark L.B beneath a crown.
Height 16.5 cm. Diameter 15.3 cm. Weight 804 grams 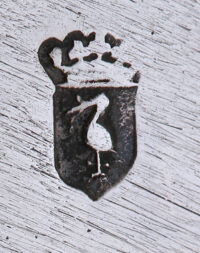 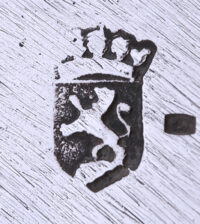 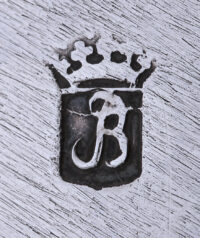 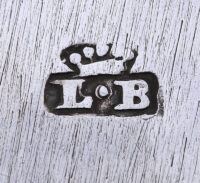