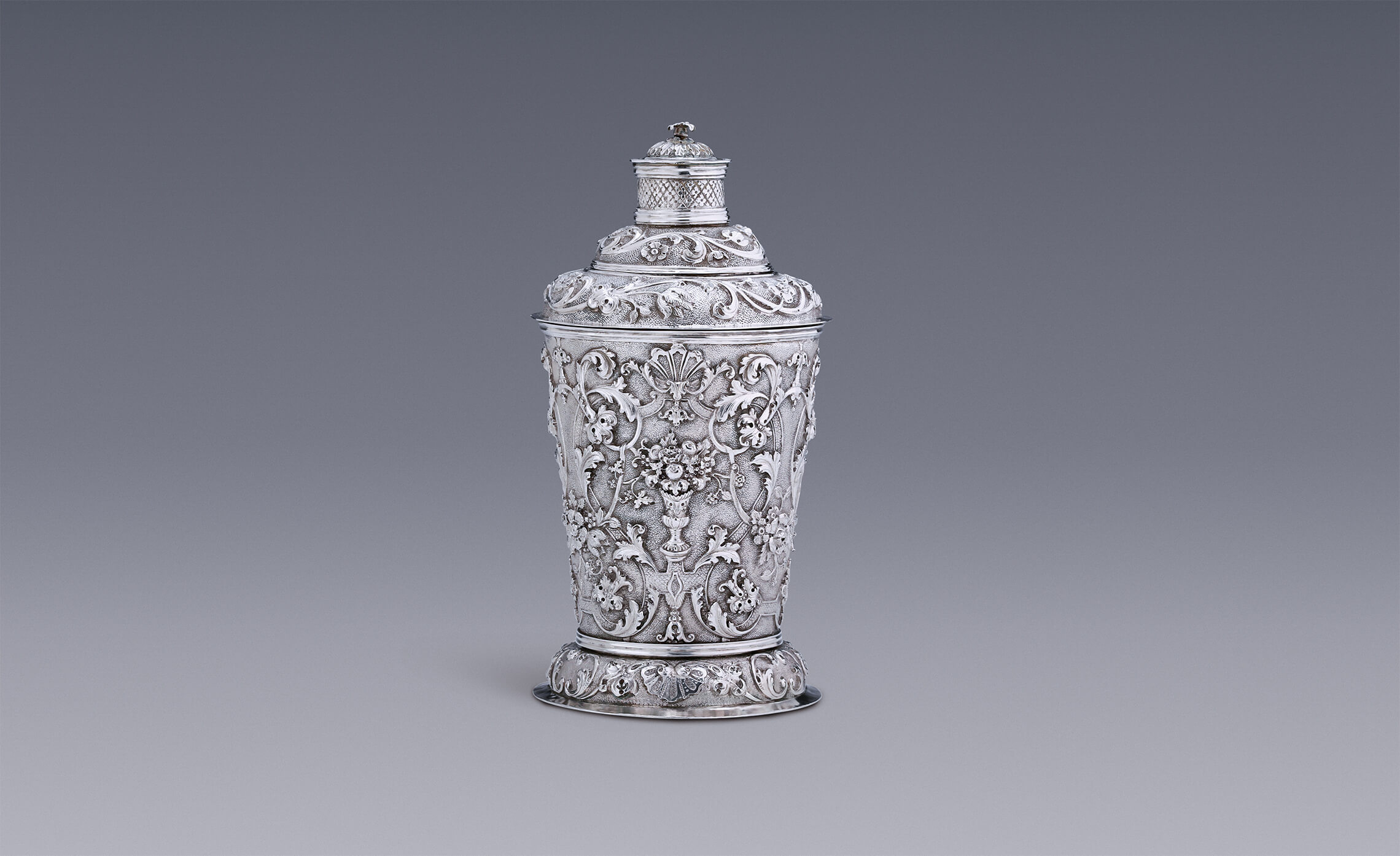 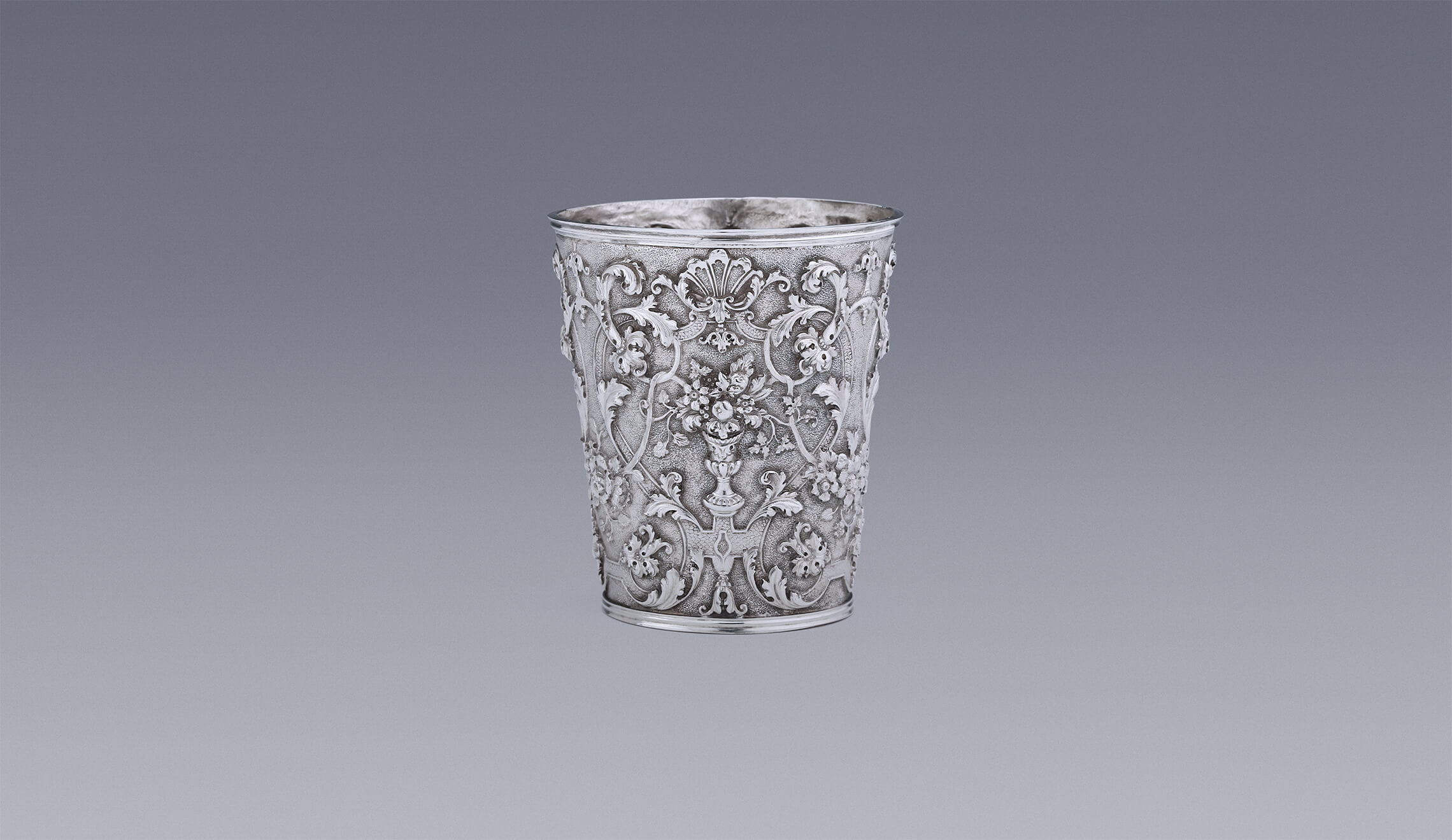 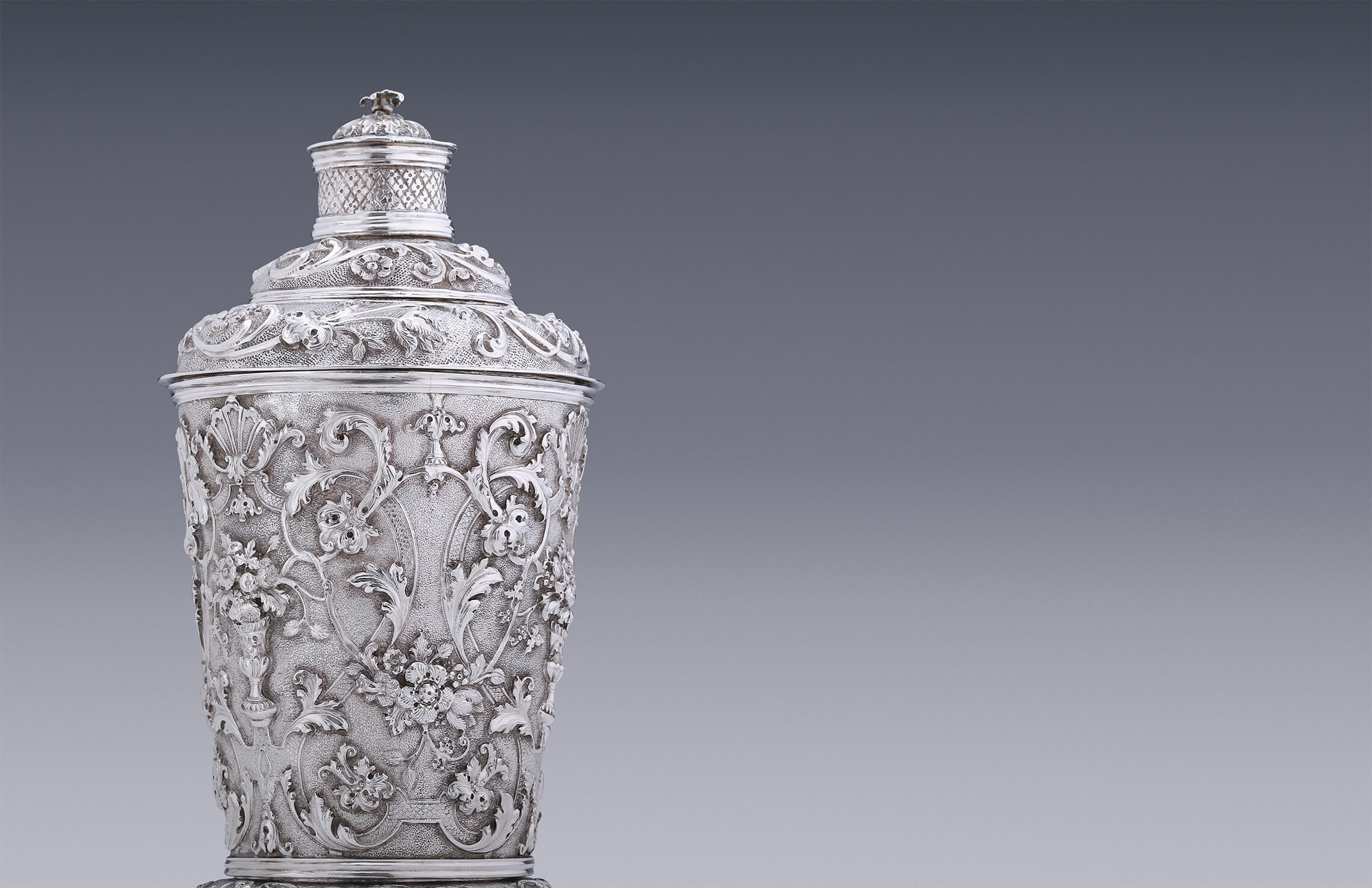 Masterpiece for the Frisian Guild

This very refined masterpiece was made around 1700 in Friesland. The artfully chased band which forms the corpus of this teacaddy was part of the proof of skill an apprentice silversmith had to demonstrate in order to be admitted to the silversmiths’ guild as a master silversmith. Only a few of these masterpieces have survived. There is no maker’s mark on the piece since the maker was not yet a master and consequently did not have a mark.

The decoration on a masterpiece had to be technically challenging and sufficiently refined for the aspiring master to show that he could emboss, engrave and chase with the utmost finesse. The art lay in not going too far. If he raised the ornaments too high out of the silver, the metal could crack and the apprentice silversmith would have to start all over again. The chasing of the elaborate decoration on the band of the piece shown here is of outstanding quality. It consists of three motif combinations: an urn with flowers, surrounded by shells, swags of floral and acanthus leaf motifs and strapwork that transitions into gracefully curling leaves. The decoration is complex, extremely refined and hugely varied; every bit of the surface is worked and each detail is executed slightly differently. The decorations stand out clearly against the matted background.

There is a striking resemblance between the decoration on this masterpiece and one made in 1695 by Johannes van der Lely. And there is yet another piece with virtually identical decoration which, like this one, was made by an unknown master.The intricate, profuse but symmetrical decoration on the chased band is typical of Louis XIV style, which came into fashion in the Netherlands at the end of the seventeenth century. Under the influence of the French émigré architect Daniel Marot, the style was taken up by the stadholder’s court and disseminated in the Netherlands. The grand masters Johannes and Gabynus van der Lely were the first silversmiths in the Northern Netherlands to incorporate Marot’s motifs in their chased silver objects.

Functions of the Guilds

A guild was an association serving the interests of people in the same trade and fulfilled several functions. Guilds had sole rights to the practice of their craft in their town or city. They aimed to manage the labour and sales markets, and supervised the quality of the products made in a particular trade. Various methods were employed to ensure that guild members could in principle earn a living. The guilds restricted the number of masters by demanding a demonstration of skill and imposing entry fees. They set limits to working hours and to the number of assistants and apprentices a master could have. They also set the market prices of the products and took action if anyone practised the craft without being a member of the guild. Guilds also played a role in training new colleagues. And they had a social function; they provided a financial safety net for sick or elderly guild members, and for the widows of deceased members. Membership of a guild gave a person a social identity and provided opportunities for informal contacts with others in the same trade.

All artists and craftsmen were members of the Guild of St Luke—except for silversmiths and goldsmiths, the only trade to have a guild of its own. They belonged to the Guild of St Eligius, also known as St Eloy. This was because local authorities wanted to retain control over the silver and gold circulating in their region in the form of coins and objects. Since the authorities had no expertise in this field, the task of supervision was entrusted to the silversmiths’ guild.

From Apprentice to Master

Anyone who wanted to become a silversmith or goldsmith had to serve an apprenticeship lasting several years. The guild saw to it that the apprentice was trained by a guild member. This meant that the guild could guarantee the quality of the training of new members, although they seldom intervened in the training itself, which took place in the master’s workshop. Boys were often apprenticed to the trade when they were eleven, twelve or thirteen, although apprentices could be as old as eighteen. Apprenticeships lasted on average from four to six years. When they had completed their apprenticeships, they could begin to work as a journeyman or assistant. The final step in their career was to set up as independent goldsmiths or silversmiths. To do this, they had to join the guild and submit a proof of their skill, their masterpiece. They also had to have proof of burghership and pay an entry fee. The average age at which people submitted their masterpiece in Amsterdam was twenty-seven.

Not all apprentices submitted a masterpiece, either through lack of talent or a lack of money, for submitting a masterpiece was a very ex pensive business. Before they could submit a masterpiece, they would have to deposit a sum of money. They also had to pay the master during the period when they were making the masterpiece, living in their master’s house and using his equipment. And when someone had had their masterpiece accepted, it was customary in seventeenthcentury Friesland for the apprentices to offer an expensive celebratory meal.

According to a decree issued by the Court of Friesland in 1544, the full test for admission to the guild involved making three pieces: ‘A gold ring, with a well-set stone and engraved on both sides, enamelled in various colours. Secondly, a small seal artfully engraved at least the size of a stiver. Thirdly and lastly, the body of a cup or beaker with an artfully chased band around it, among other things.’ If the journeymen could not afford to pay for the materials for the test themselves, they were provided by the guild. If apprentices’ pieces were rejected, they could try again a year later.

This masterpiece was one of the three parts of the master’s test. If it was successful, the new master was enrolled in the guild and his maker’s mark was struck into the local guild’s copper registration plate. The maker’s name was engraved after his mark. The new master had to strike his mark on every object that left his workshop, thereby guaranteeing the silver content of the piece. When he made his masterpiece, an apprentice did not have a mark, so these pieces are never marked. Only a very few of these bands survived. After they were made, some of them were efficiently used as base for a tea caddy. The silversmith, who was now a master silversmith, would make a removable foot and cover with a knob in the same style, as is the case here. A silversmith often only put his maker’s mark on such pieces when they were sold. There are only two known chased masterpiece bands that have a maker’s mark—those by Johannes and Gabynus van der Lely.