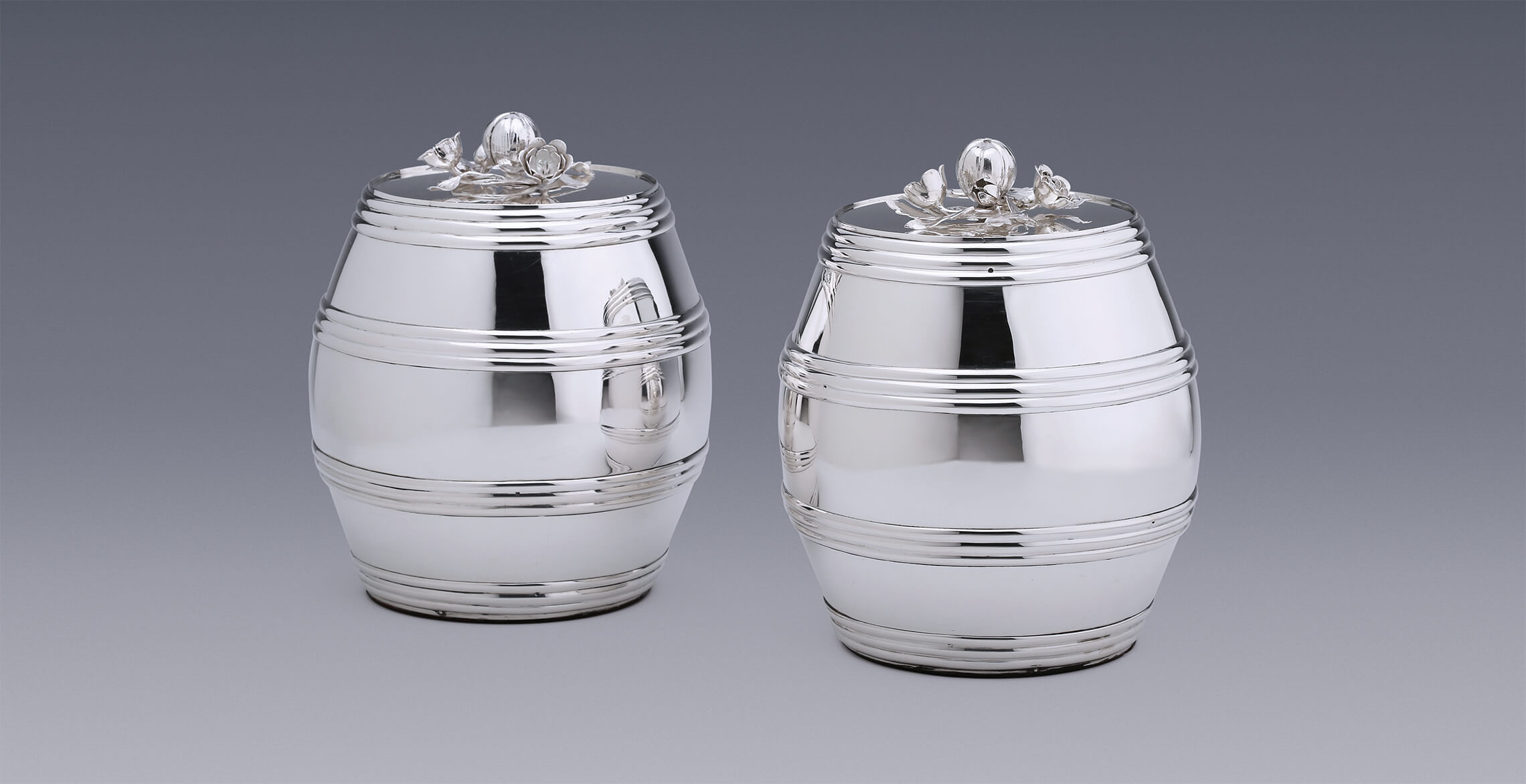 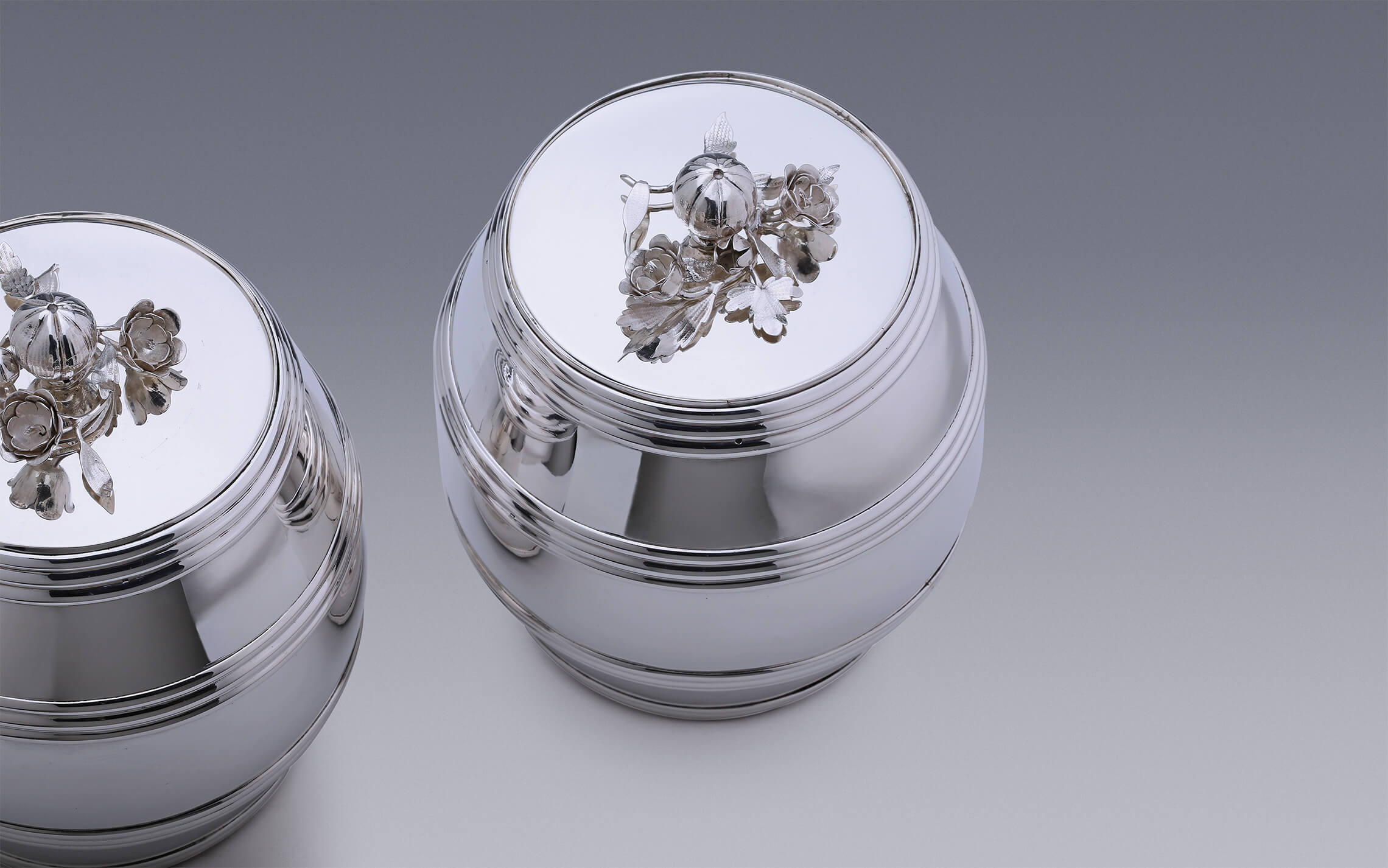 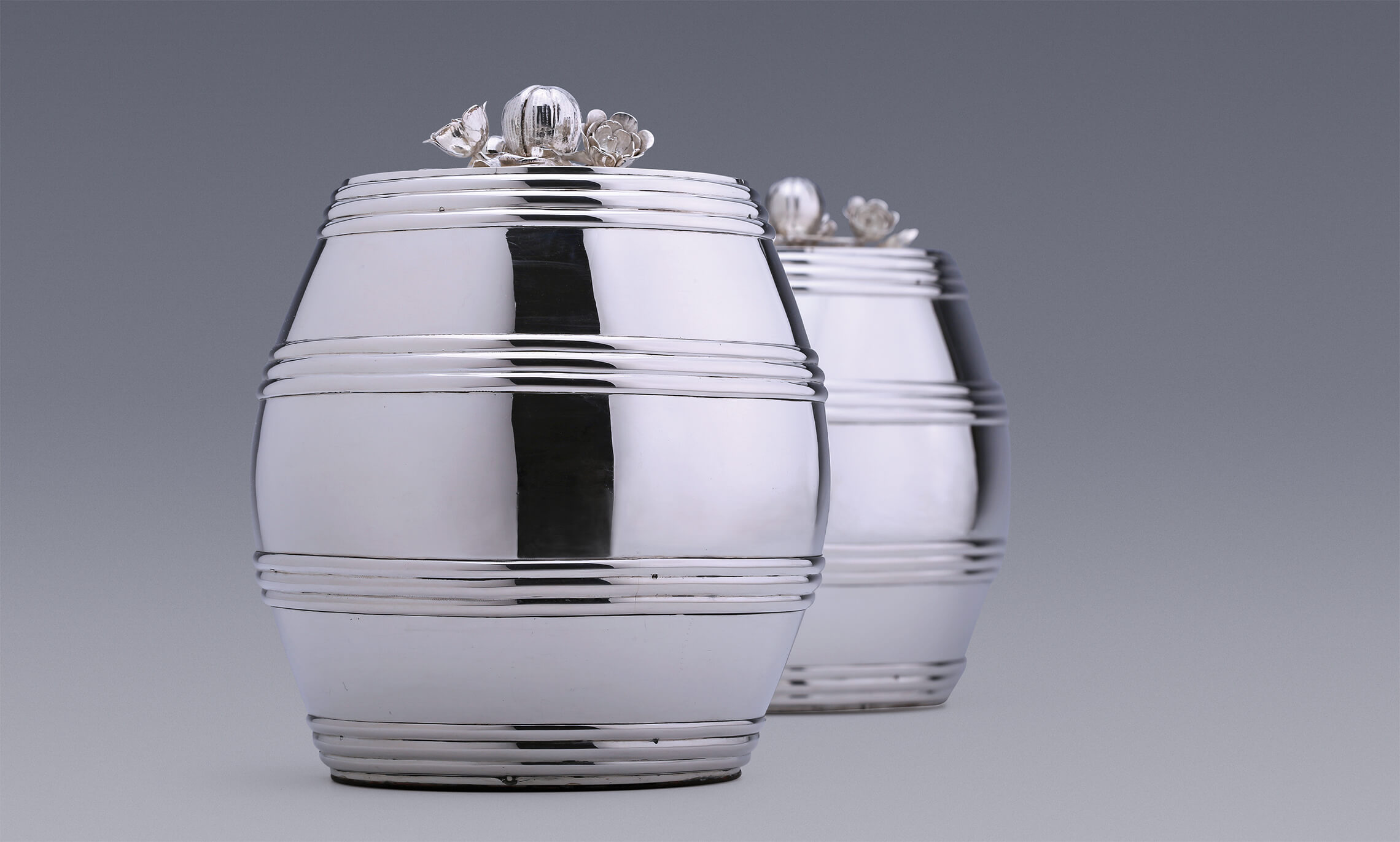 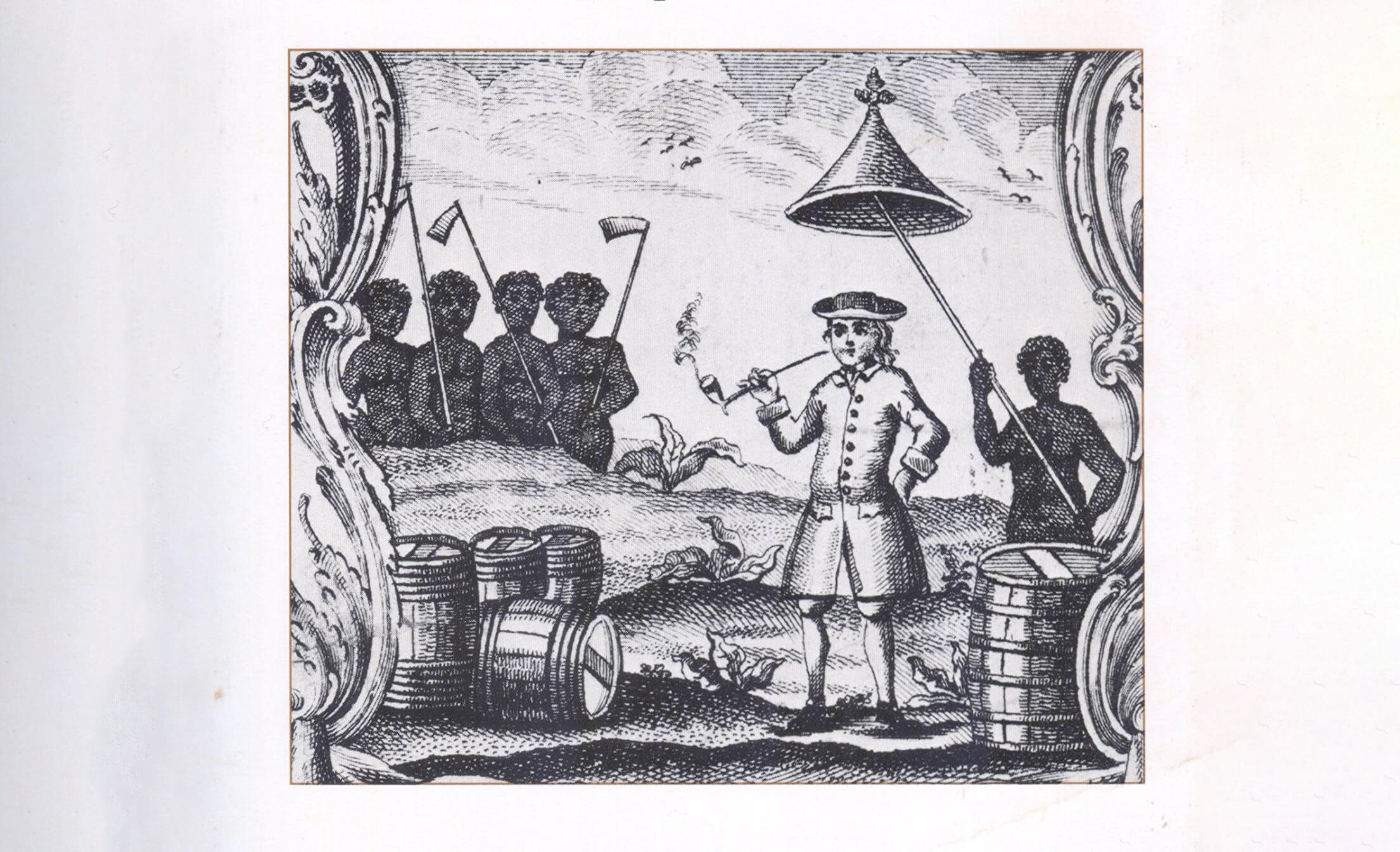 This unique pair of silver tobacco jars was made by the Groningen silversmith Henricus Hubert in 1788-89. The jars have the shape and proportions of the large barrels used to transport tobacco and other goods from the New World to Europe.

These barrels were constructed from wooden staves held together by hoops made from willow withies. There are four hoops on these stylized silver examples. Placed at a regular distance apart, they each consist of three rounded withies. The areas between the hoops are completely plain, giving the little casks a beautiful, clean-lined look, which contrasts well with the airy Louis XV style sprig decoration on the covers—delicate roses with leaves and a pomegranate that serves as a knob. The bottom of the barrels is made of wood. This is the only known eighteenth-century pair of Dutch silver tobacco barrels.

The history of smoking in Europe begins with Christopher Columbus’s discovery of South America in 1492. In Cuba he encountered all sorts of exotic plants and was offered tobacco leaves by the indigenous people. He took the leaves back to Spain, but initially people refused to smoke tobacco because the church thought that it came from heathens and consequently from the devil. People did, though, believe that tobacco could have a medicinal, healing effect. When the English and the Dutch, in their turn, came into contact with tobacco in South America, the trade flourished.

Imported tobacco was very expensive and swingeing taxes were levied on top. Nevertheless, chewing tobacco and using snuff became fashionable in the Netherlands at the end of the sixteenth century. In the seventeenth century, the tobacco industry boomed and people began to smoke pipes for the first time. Attempts were made to grow tobacco in the Netherlands, but the best quality came from Suriname. In the Dutch Republic people of every class smoked everywhere—in houses, taverns and shops, and on board ships. Townsmen, peasants and country folk all smoked pipes, as is evident in paintings of the Dutch Golden Age.

Initially tobacco was sold in apothecary’s shops because of the supposed medicinal effects, but in the seventeenth century special grocer’s shops that could be found in towns and cities all over the country began to sell it. Among them was Groningen, where the trade in and sale of colonial goods like sugar, cocoa, coffee and tobacco were extremely lucrative at that time. The poorest smokers bought pre-filled pipes in the taverns. The wealthier townsfolk bought tobacco. At the end of the eighteenth century, for example, people could go to ‘De rookende moor’ (the smoking Moor) in Oude Ebbingestraat. The shop sign was a wooden image of a Moor dressed as a distinguished African prince, lavishly decorated with gold – see image above. The Moor was a popular symbol to indicate a place where tobacco was sold, but in fact it had nothing to do with the tobacco trade. It was an African, who in the days of the slave trade was brought from Africa to work on the American tobacco plantations. A slave would never have been able to smoke a long pipe; they were the preserve of the plantation owners and the European traders.The Moor pictured here has a long tobacco pipe in his left hand, while in his right he holds a jar marked ‘rappé’, a word for snuff, which was sold in baluster-shaped earthenware jars like this. To keep tobacco at home, or carry it in coat pockets, men had tobacco boxes. They were often made of pewter or copper and, for the really well-to-do, from silver or even gold. Silver tobacco boxes first appeared in the Netherlands in the midseventeenth century.

When the price of tobacco fell in the course of the eighteenth century and consumption rose accordingly, tobacco boxes got bigger and silver tobacco jars appeared. These two silver barrel-shaped tobacco jars are exceptionally large, and the fact that they are a pair makes them extraordinarily rare. A smoker’s status was reflected in his tobacco box and smoking materials. It is obvious that this pair of bright, gleaming silver Groningen tobacco jars was made to astonish the neighbours.

The maker of these tobacco jars was the renowned Groningen silversmith Henricus Hubert (1748-1826), who was a member of the town’s Catholic community. In 1757 he was apprenticed to his childless uncle, Bernardus Papinck, whom he also succeeded. In 1774 he became a master silversmith, with his aunt paying the cost. She died a year later and Hubert inherited the house and the silvermaking equipment. In 1797 he was a member of the guild. In the same year he became superintendent of the Groningen Board of Orphans, which was responsible for looking after the orphans and ensuring that their interests were properly safeguarded. Before 1795 this post was only open to members of the Dutch Reformed Church, but during the French period, orphanage superintendents could also come from other denominations. Hubert had a shop in Vismarkt, the second house to the east of Vuilegang. He was the third Catholic silversmith in this house, at the sign of the Golden Plough. Hubert and his wife Aldegondis Maria Boelens had seven children. Several of his daughters married silversmiths, but after the death of his wife he sold the house to his nephew, the silversmith Nicolaas Wilhelmus Crone. Silversmiths from the family continued to live in the house until 1935, when the last of them retired and gave his tools to the Groninger Museum.38 Henricus Hubert was a productive silversmith and we know of several pieces by him, including milk jugs with covers, a mustard pot, a serving tray, candlesticks and a silver fountain on a stand to go on a sideboard. Marked on the underside of the cover with the Groningen assay office mark and date letter 8 O struck twice, and the maker’s mark HH for Henricus Hubert also struck twice. 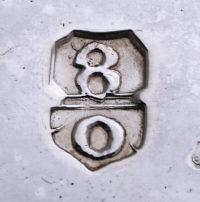 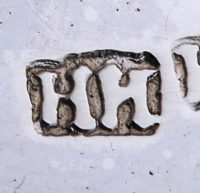