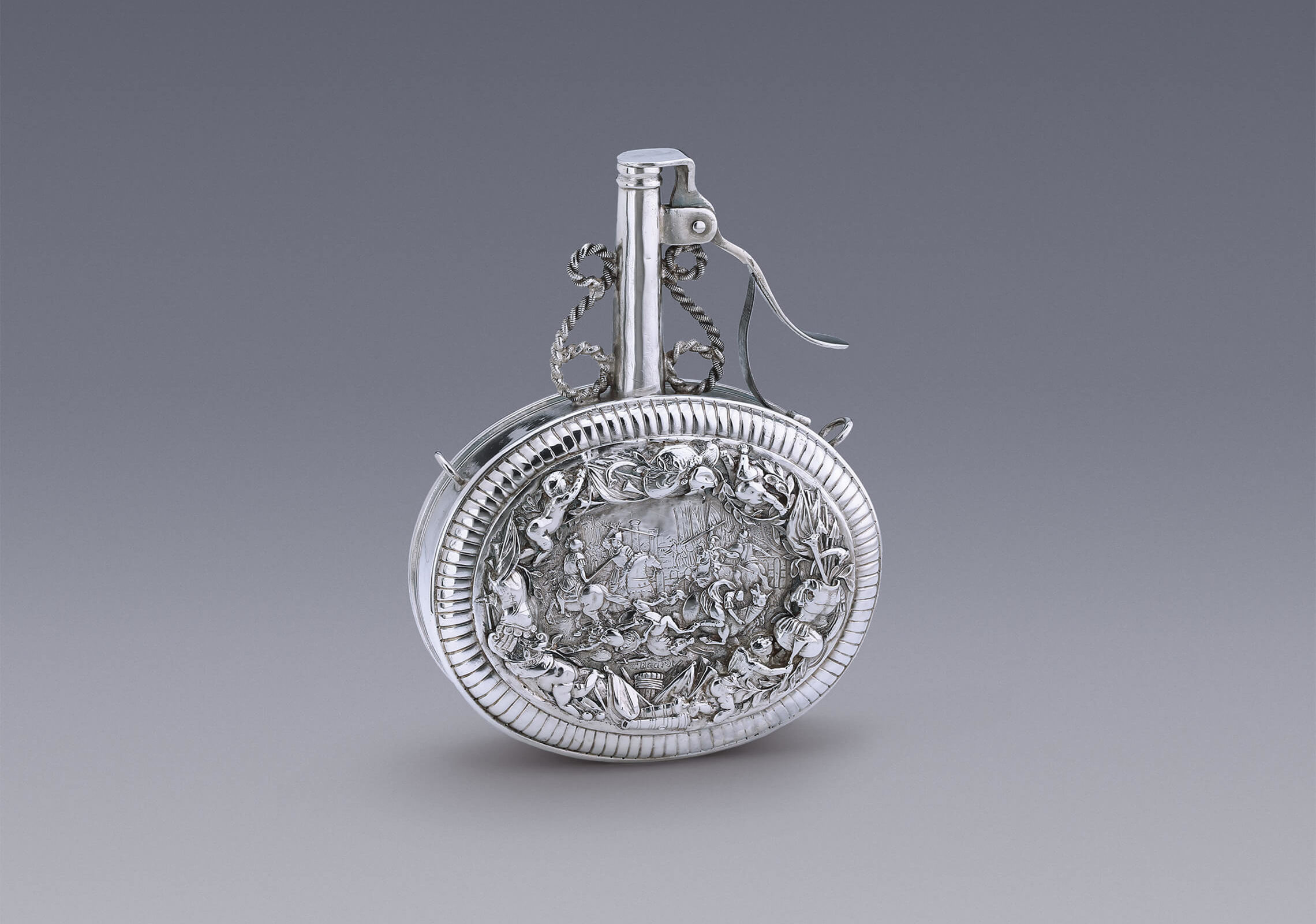 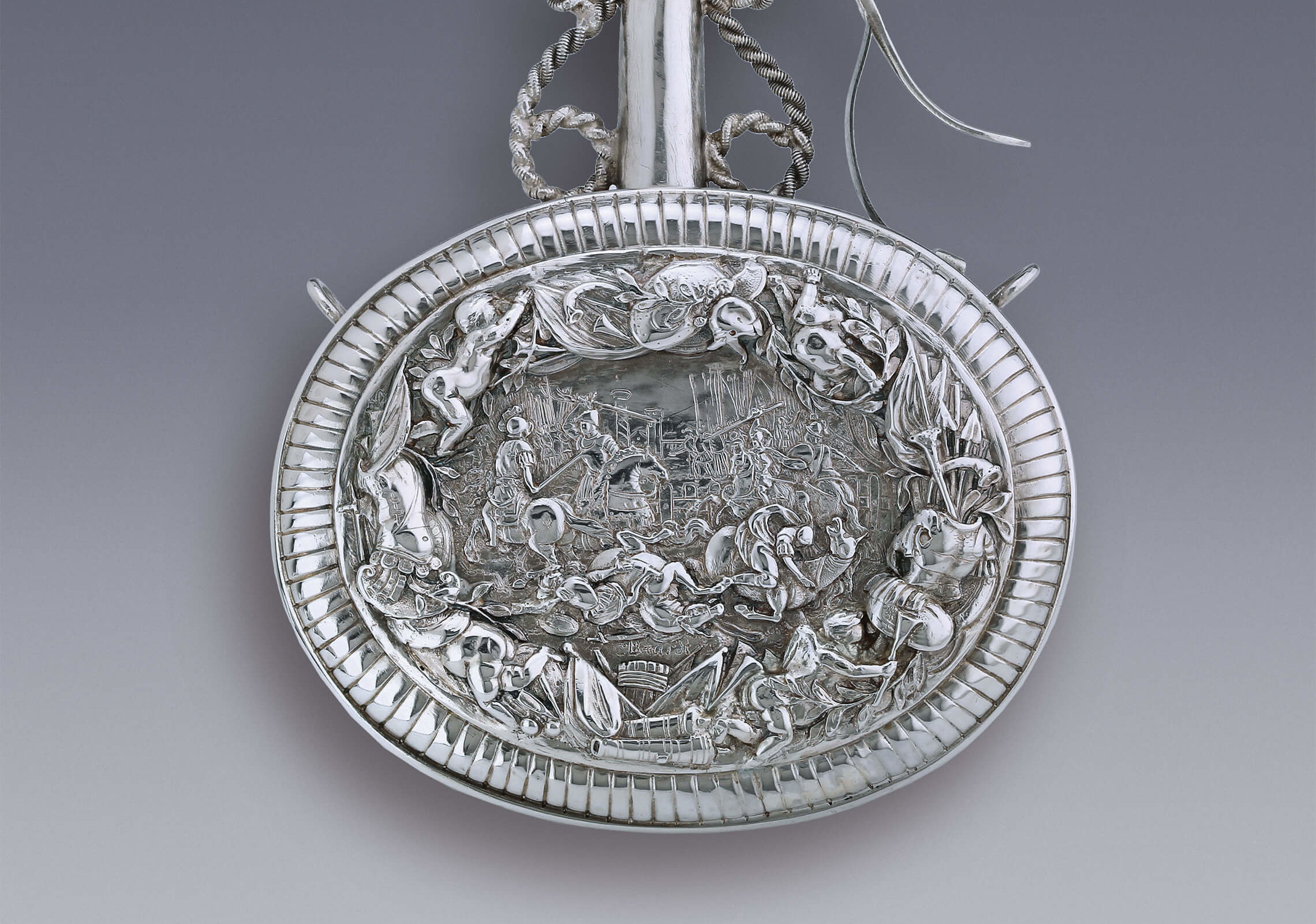 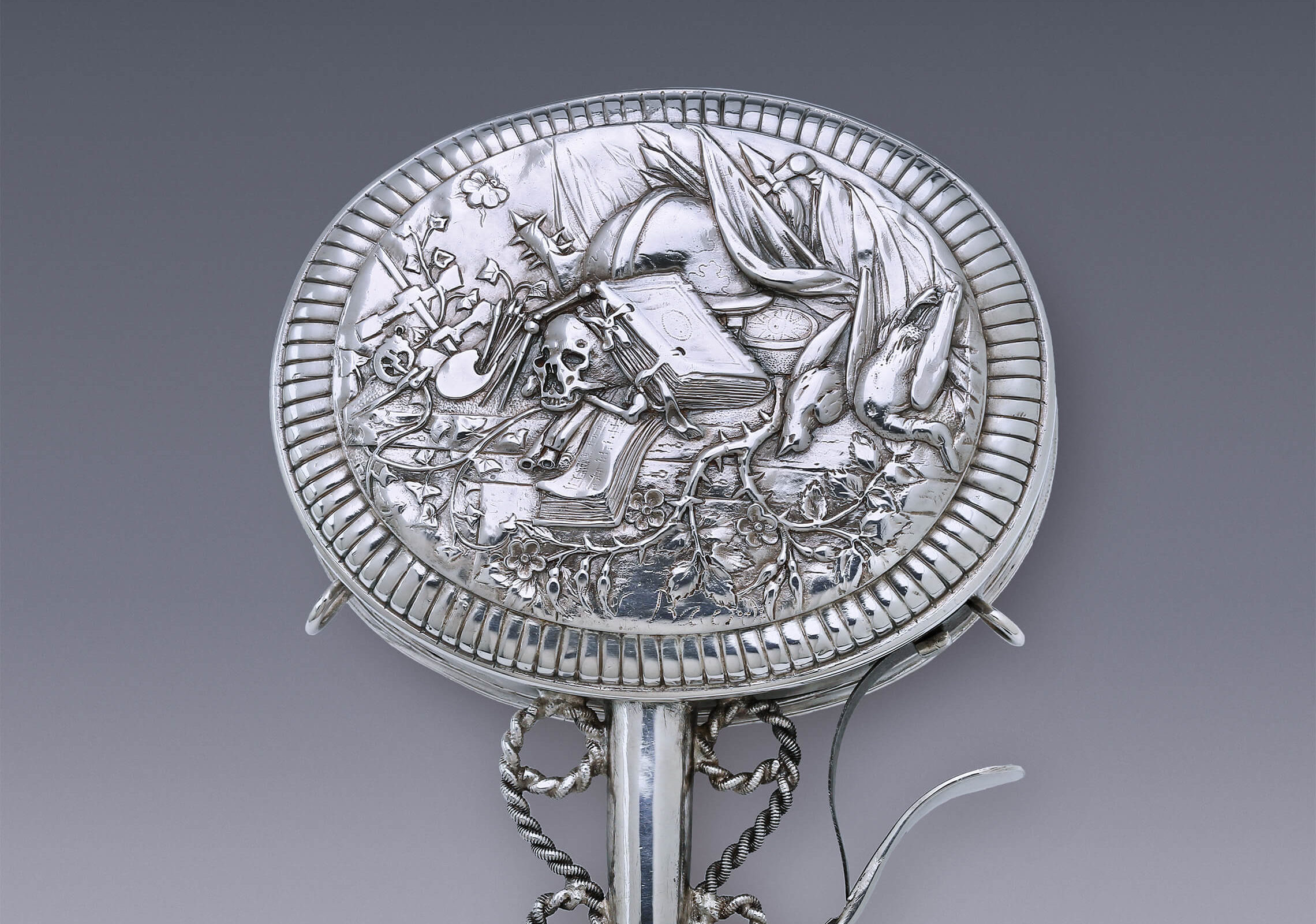 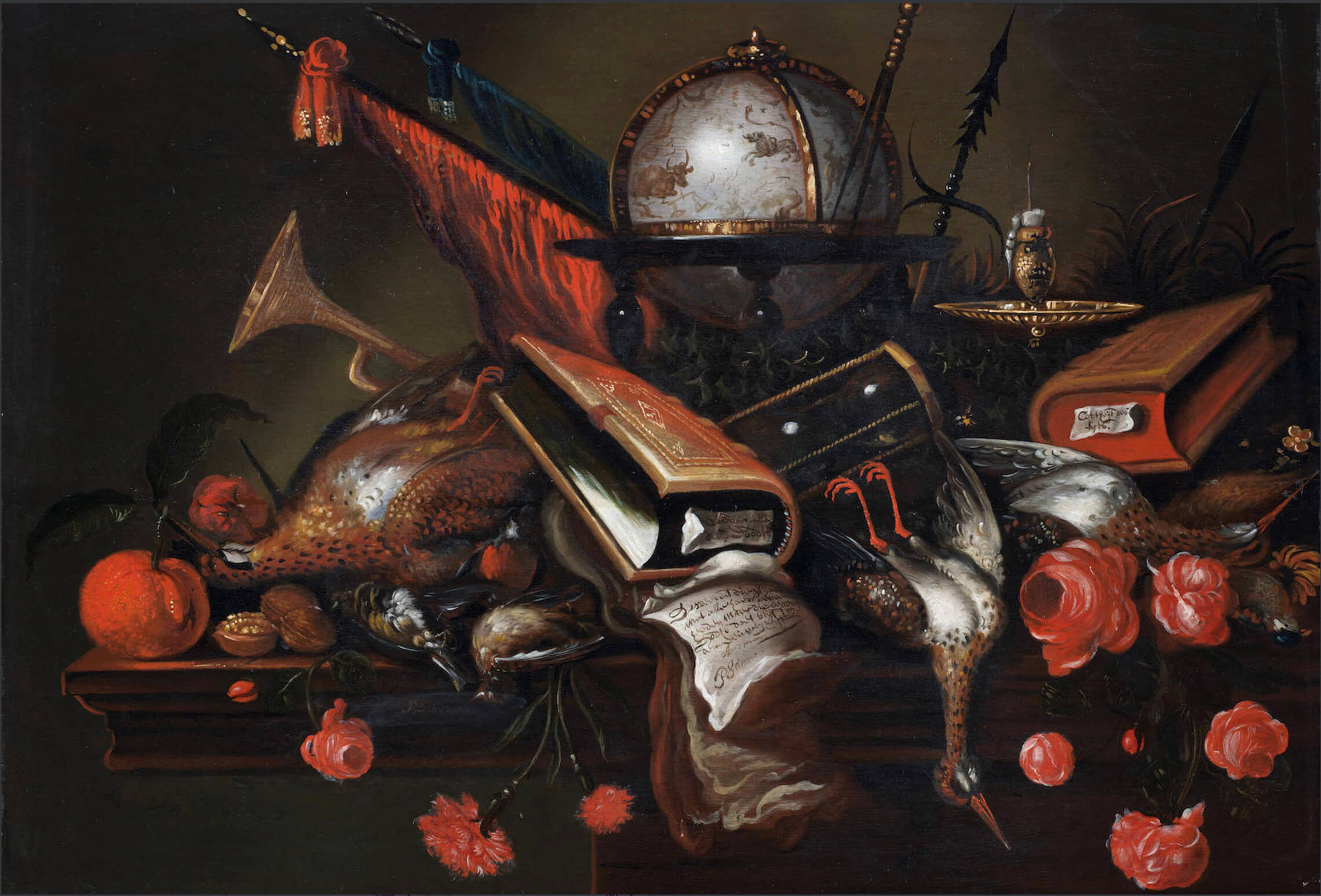 This exceptionally rare powder flask was made by the renowned silversmith Claes Fransen Baardt of Bolsward. The oval flask is decorated on both sides with very fine chased scenes, one of Baardt’s specialities. The scenes are surrounded by gadrooned borders. On one side there is a Vanitas still life, an allegory of mortality, chased in the silver. On the other side is a battle scene. The spout is reinforced by two S-shaped, twisted cable motifs. The round cap that closes the spout is attached to a spring with a thumb rest.

A powder flask was used to dispense gunpowder into a muzzle-loading gun. The powder was needed for ignition, creating a great volume of hot gas that propelled the bullet out of the muzzle at high speed. Pistols and muskets could only fire a single shot, then they had to be loaded again with powder from the powder flask and a bullet. Powder flasks were made in various shapes and sizes, including conical or pear shapes, flat round or oval, and in the shape of a horn.

They could be made of a variety of materials, like copper, brass, wood, ivory and horn. Dutch silver powder flasks are exceptionally rare, only one other example which is now in the collection of the Fries Museum is known. The very luxurious version shown here was slung around the neck or hung from a belt during the hunt, suspended from a silver chain attached to the two eyes on the flask.

Correctly loading the weapon required precision. The fuse had to be burning and the powder had to be kept dry. If all went well, the powder would ignite and a shot could be fired. If the powder was damp it would fizzle out and the weapon would not fire. Expressions like ‘a flash in the pan’, where the gunpowder flared up but no shot was fired, and ‘keep your powder dry’ have entered the English language.

The maker of this powder flask was one of the most important Frisian silversmiths of the seventeenth century. Of the four generations of silversmiths the Baardt family produced, ClaesBaardt was the second and the most virtuoso. Claes (1628 – 1693), born in Bolsward, was the oldest child of the marriage of silversmith Frank Rienks Baardt and Lyuwkien Clases Allinga. On 1 December 1640, at the age of twelve, he was recorded in the Bolswardregister of goldsmiths and silversmiths as an apprentice to his father.  On 3 May 1654 he was enrolled as a master in the guild, having successfully submitted his masterpiece. In all likelihood, he took over the running of the silversmithing business from his father. Claes Fransen Baardt did not confine his activities to silversmithing. He also invested in property. The Bolsward orphanage records show that, like his father, Baardt traded in woollens and textiles, and also looked after his mother-in-law’s business interests. In the year he became a master, he married Siucke Harckes, a daughter of the cloth merchant Harcke Gerrits and Trincke Rinnerts; she was a good match. Through Rinnert, Siucke’s brother, Baardt became a connection of the famous Van der Lely family of silversmiths in Leeuwarden. When Rinnert died, his widow Ijnske Nannes Okma married Frederick Jarichs van der Lely.

Silversmiths often used pattern books and, like painters, drew inspiration from print examples. In the designs of his chased and embossed silverwork, Baardt used elements of etchings by Rembrandt, Antonio Tempesta and Hubertus Quellinus. Beautifully rendered hunting scenes and battles, along with delicate images of flowers, butterflies and insects, are striking and recurrent motifs in Claes Baardt’s work. His chased work was renowned and he was sought-after as a silversmith. His fame is evidenced by the commissions he received from Henricus Popta in 1682 and 1683 for two chased candlesticks, a mustard pot and a salt. Popta, advocate to the court of Friesland, was among the elite in the region. He owned a considerable collection of silver, part of which, known as the Popta Treasure, is in the collection of the Friesmuseum.

The design on this powder flask was taken from a book of prints by the brothers Artus and Hubertus Quellinus. In 1650, Amsterdam city council engaged the Flemish sculptor Artus Quellinus (Antwerp 1609 – 1668) to develop a schedule of decorations for the new town hall designed by Jacob van Campen. His brother Hubertus Quellinus made prints of the sculptures on the pediment and the statues and reliefs in the interior. Baardt used Quellinus’s motifs in the cartouche around the battle scene on this powder flask—arms, cannon, a powder keg, standards, armour, a cuirass and putti with trumpets and garlands. The battle scene itself was inspired by the work of Antonio Tempesta (picture on the left), who was active in Rome until 1630.

All the objects that represent the liberal arts on the Vanitas side of the flask can be found at the feet of the Maid of Amsterdam that Quellinus designed for Amsterdam town hall. Here Baardt combined these elements with the work of his contemporary, the Frisian painter of Vanitas still lifes Petrus Schotanus (Dronrijp 1601 – Leeuwarden before 1675), picture above. On the powder flask he chased a skull (a symbol of death), ivy (a symbol of eternal life), roses (a symbol of love, happiness and affection), a butterfly or moth (symbolizing the immortal soul and the brevity of life,) dead birds, a Bible, sheet music, a pair of compasses, painters’ tools, musical instruments, a globe, a compass, spears and flags. Baardt also used some of these elements on the cover of a brandy bowl he made in 1679.

A great many works by Claes Baardt are now in museum collections. The Rijksmuseum holds a pair of salts and the base of a candlestick made by him. The Fries Museum’s collection includes a salt and two large ornamental dishes—one with a chased floral border and one featuring the four seasons. The Hannemahuis in Harlingen has a superb Communion plate with chased cartouches with auricular ornaments on loan from the Dutch Reformed church in Kimswerd. The Dutch Reformed Church in Makkum has a silver dish forty-five centimetres in diameter with the four elements, and the Roman Catholic parish of St Michael in Harlingen has a chased oval ampulla tray with scenes from the Bible.

Both scenes on the powder flask are signed C. Baardt. Claes often engraved ‘C. Baardt’ or ‘C.Baardt fec.’, sometimes in combination with his maker’s mark. The spelling is consistent and the letters are always formed of small dots. Baardt signed at least nine objects in this way. When he started out, Baardt simply struck his maker’s mark into the pieces he made. In 1677 he began to sign them. Engraved signatures are rare on Frisian silver; in Bolsward Baardt was the only silversmith to sign his work. He may have got the idea from the Van Vianen brothers, who also signed their works, or it may have occurred to him when he saw the signatures of the artists who made the prints and drawings from which he took his inspiration.