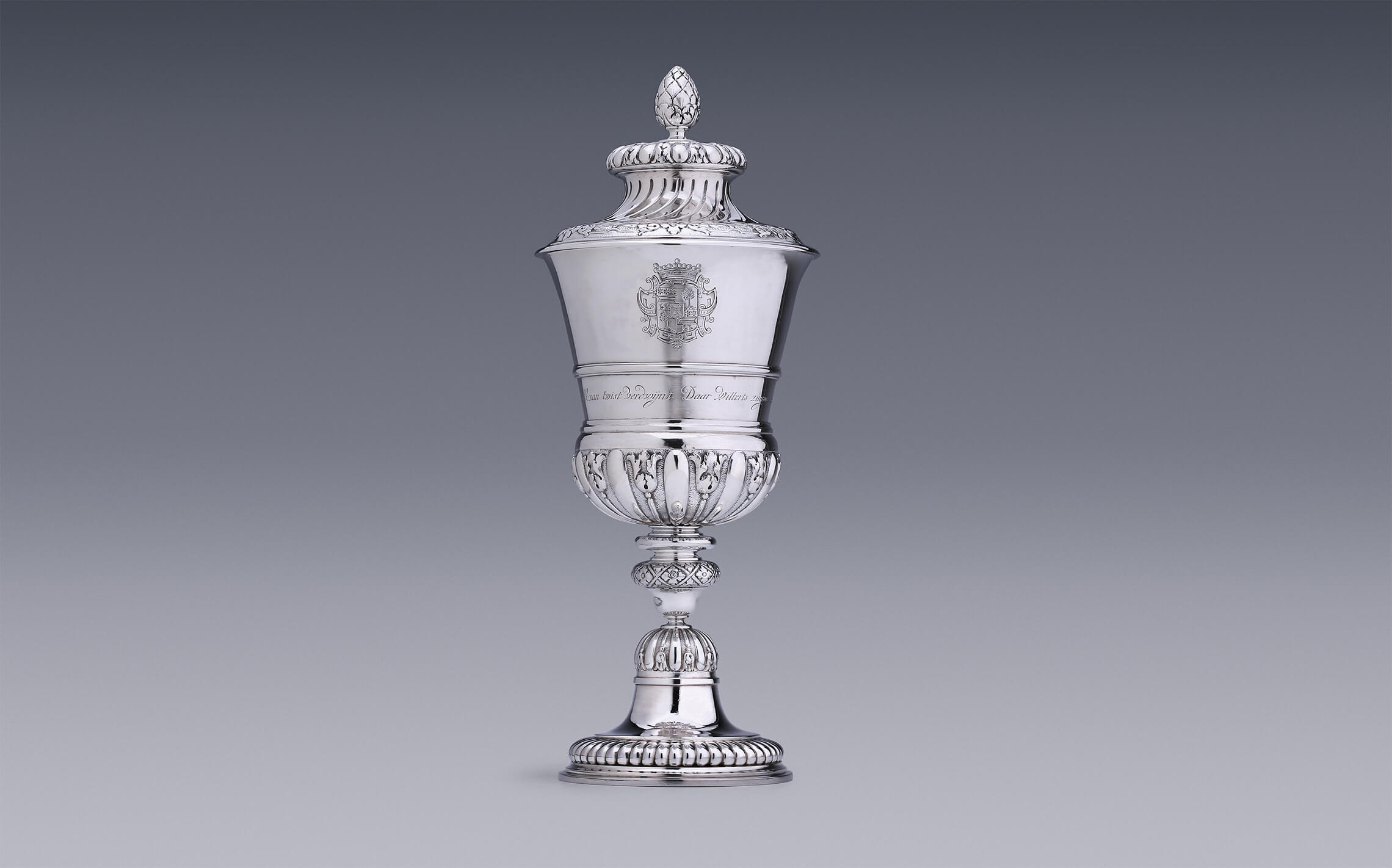 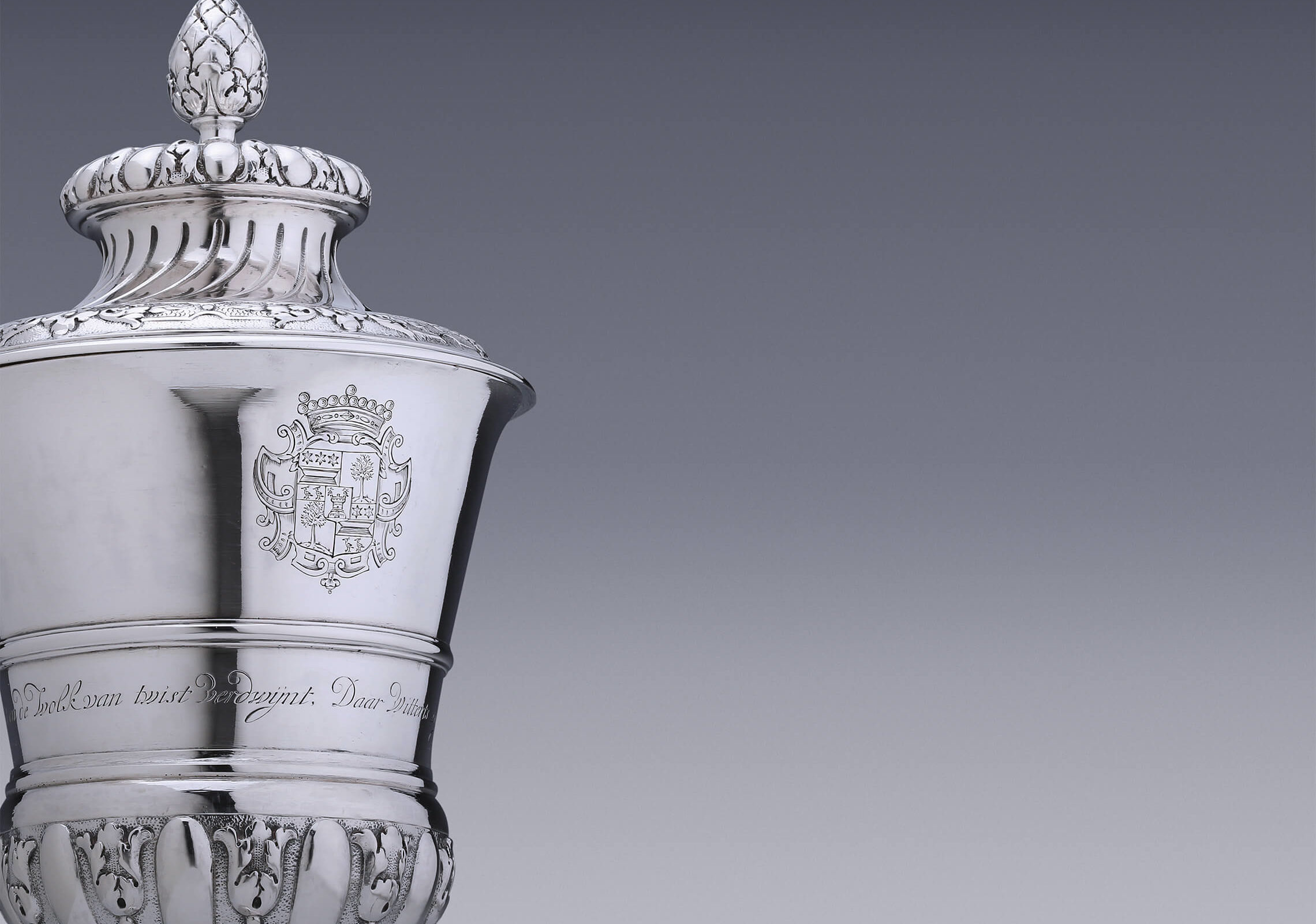 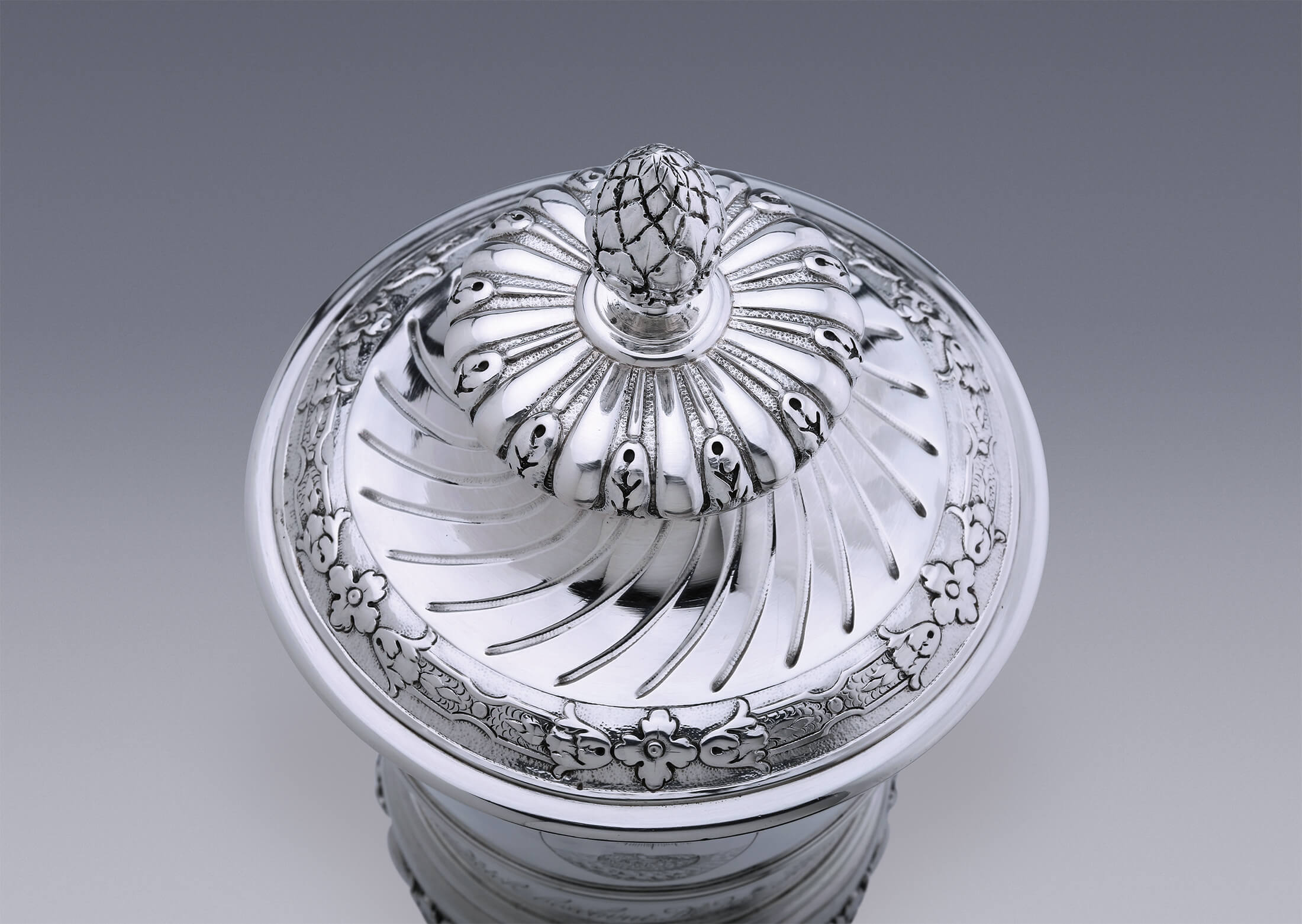 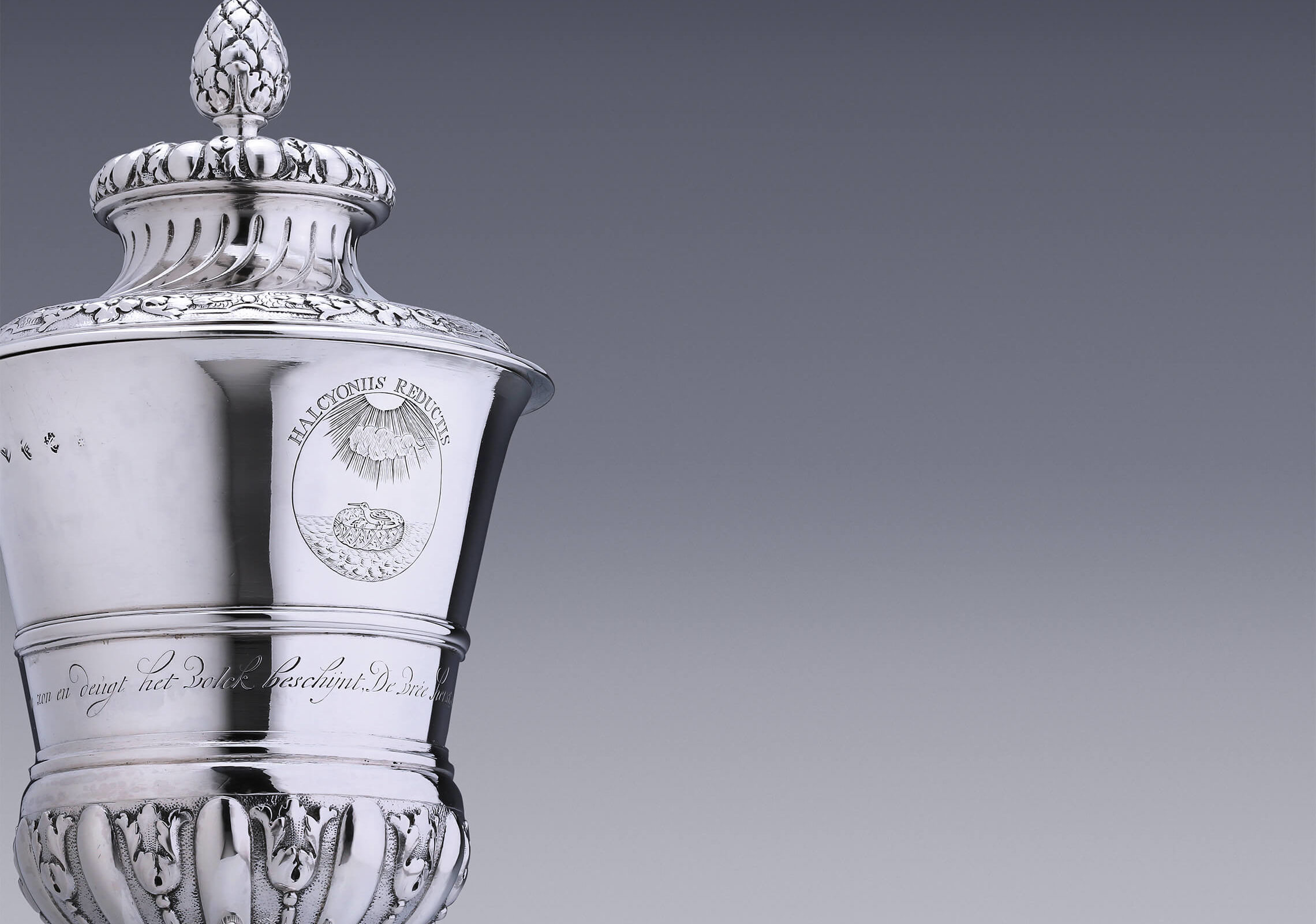 This important cup was made by Johannes du Vignon III in The Hague in 1707. It stands on a round, moulded bell-shaped foot decorated around the base with a gadroon border. The baluster shaped node has lozenge-shaped strapwork with rosettes. The convex underside of the body, the top of the foot and the cover are elaborately decorated with a band consisting of a tulip on a long, straight stem against a matt background, interspersed with gadrooning.

The cover, chased with twisted cannelures, has a knob in the shape of a pine cone. Large cups of this type were also used as hensbekers, made for hoogheemraadschappen— district water control boards—particularly in the area around The Hague and Rotterdam. They were used on ceremonials occasions. There are also some smaller cups, commissioned for a wedding ceremony. Cups with covers were also used by guilds and occasionally they were presented in recognition of extraordinary courage in battle, or in gratitude for mediating in a conflict.

It is the latter that applies to this cup, as the engraving on the body of the cup tells us. On one side are the family arms of Cornelis Wittert, and on the other a medallion containing a halcyon (kingfisher) on its nest. The inscription between the two bands on the body reads: ‘Daar Witterts Zuyvre zon en deugt het volck beschynt. De Vree hersteld wordt, en de wolk van twist verdwynt’. (‘As Wittert’s pure sun and virtue shines upon the people. Peace is restored, and the cloud of discord vanishes.’) The cup was clearly given to Cornelis Wittert for the part he played in ending a period of strife.

The engraved image of the halcyon on its nest alludes to the peaceful and fruitful days that have returned again after troubled times. The halcyon is a bird in a Greek legend, named after Alcyone, daughter of the wind god Aeolus; it is the kingfisher that nested on the water and raised its young during a period of calm without storms and waves. In Dutch culture, the kingfisher is a symbol of perseverance and trust in a good outcome in the face of adversity. ‘Saevis tranquillus in undis’—calm amid the raging waters—was the motto of William I, Prince of Orange, who also used the kingfisher symbol. The present Dutch king uses it, as did his great-grandmother, Queen Wilhelmina. The engraved kingfisher symbolizes strength of purpose and equanimity; taken in conjunction with the inscription, it is a reference to the personality and actions of Cornelis Wittert in 1707, the year this cup was made.

The year 1707 was a momentous one for Cornelis Wittert. He married for the second time and acquired the manor of Valkenburg and the associated title. It brought him the ‘hoge, middel ende laege jurisdictie van den dorpe en jurisdictie van Valckenburg mette vrije jaarmarkt en tollen aldaer en ‘t veer over de Rhijn’ (‘the high, middle and low jurisdiction of the village and jurisdiction of Valkenburg with the free market and tolls there and the ferry across the Rhine’). Aside from the financial benefits of the tolls, the jurisdiction he acquired was an important administrative event. Until Wittert became Lord of Valkenburg in 1707, there was administrative confusion in the manor. This changed on 2 December 1706, when he paid twenty thousand guilders to the estate of the late Suzanna Studler van Zurck for the feudal rights to Valkenburg. In 1681—nine years after the death of her husband, George, Duke of Orsmael—this Lady of Valkenburg married far beneath her station when she wed her coachman and manservant Daniel van Hulsenbeek. This was such an extraordinary marriage at the time that Constantijn Huygens Jr actually wrote about it in his diary. When Susanna died in 1699, there was disagreement about the estate. A prolonged legal battle followed, involving not only her widower, Van Hulsenbeek, acting as Lord, but the minister and the bailiff of Valkenburg (who was also the sheriff and tax collector). This latter was unpopular with the people and had heated rows with Van Hulsenbeek, which even descended into physical violence. The minister was not well-loved either. He was accused of a serious dereliction of duty and of a series of criminal offences. The minister rowed with his wife, with the bailiff, with Van Hulsenbeek, with the schoolmaster and with his parishioners. When Cornelis Wittert arrived in Valkenburg, order was restored and peace returned. The minister was removed from office and in 1707 the bailiff, too, was replaced. Van Hulsenbeek’s role as ‘Lord’ of Valkenburg came to an end, although he continued to live in Valkenburg as a wealthy man. It is likely that Van Hulsenbeek gave Wittert this large silver cup in 1707 as a token of his gratitude. He was evidently pleased with the return of peace in Valkenburg, and the sale of the feudal rights meant he could afford to commission such a costly piece.

Cornelis Wittert came from a prosperous family of Catholic merchants in Rotterdam. He was born on 20 April 1672 and was the son of Adriaen Wittert, Lord of Lange Backersoort and Deyffelshoeck, and Maria de Licht. Adriaen was the wealthiest and most prominent of the Catholic patricians in Rotterdam. In 1670, the burgomaster and governors of Rotterdam elected him head of the Vintners’ Guild and in 1677 as a member of Rotterdam’s Board of Commerce. He lived on Wijnhaven, kept a carriage and horses, and had a country estate in the manor of Oost Bloemersdijck. Adriaen Wittert died on 15 January 1712. The property he left was valued at no less then 652,936 guilders. In 1702 Cornelis married Maria van Rynsburgh of Leiden, who died less than four years later. In 1707 he married again. His second wife was the wealthy Maria Jacoba Persyn van Ouwendyck of Delft.

Cornelis owned various manors and knightly houses, but was not a member of the landed aristocracy. In the Protestant Republic of the Seven United Provinces, the Catholics were deprived of a number of elementary rights. Catholic worship was tolerated, in part because steep admission and recognition fees had to be paid to obtain exemption from the relevant orders, but Catholics were essentially excluded from public office and could not be elevated to the nobility. By acquiring the feudal rights to his manors, Cornelis Wittert nevertheless managed to amass an impressive array of titles, and did not scruple to make them as long as possible. Cornelis Wittert’s full title was Free Lord of Valckenburg, Lord of the Lange Ruige Weide, Kortenhoef, Hoogbrugge, Driebrugge and Middelweerd (sometimes given as Bolswaert), Lord in Lange Backersoort, Deijffelsbroeck, Spijkenisse and Stollaersdijck. He died in Rotterdam on 21 June 1733 and was buried in St Lawrence’s Church on 27 June. Number 152 on the inventory attached to his will was a silver cup: ‘taken by Johannes Wittert in accordance with the valuation deed issued by the auctioneer of the City of Rotterdam on 7 February 1736: a silver cup with cover for ƒ 105. (Johannes Wittert was Cornelis Wittert’s son).

Cornelis Wittert was a very important art collector. His collection included works that came from Het Loo Palace, from the estate of King-Stadholder William III. On 11 April 1731, no fewer than eighty-one works from his extensive paintings collection went under the hammer in Rotterdam. After his death, what remained and had not been kept by his heirs was auctioned off on 7 October 1733. The two sales fetched a total of 52,000 guilders.

Johannes du Vignon III was born on 13 June 1660. His father was the silver- and goldsmith Johannes du Vignon II, who was married to Barbara Vonck. Like his father, he worked as a silver- and goldsmith in The Hague. In 1685 he married Geertruyd Wesrestee; in 1707 he married for a second time, with Henrietta van Ham. Johannes du Vignon was deacon of the Hague goldsmiths’guild in 1726 and 1735. His work was in such demand that in 1737 he was able to buy a house on the south side of Molenstraat. Until his death on 3 March 1746, Johannes du Vignon supplied all the gifts presented by the States General. In 1726, the church council of the Walloon congregation in Brielle commissioned a Communion set from ‘Mr. Vignon, Orfèvre á La Haye, deux coupes et une asiètte d’argent’, weighing 39 ½ ounces for the sum of ƒ 144-10. In 1828, this silver was transferred to the Low German Reformed congregation. The chalices were subsequently converted into collection cups. The Kunstmuseum in The Hague has a toilet set that belonged to the Ten Hove family; the candlesticks were made by Johannes du Vignon III in 1717. In 1724, he made the Communion cups with the arms of the De Laet family on the foot, from the former French Church in Voorburg, now in Museum Catharijneconvent. Marked on the side of the body with the Hague assay office mark, the Dutch lion, the date letter I for 1707 and the maker’s mark of three stars for Johannes du Vignon. 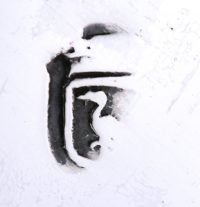 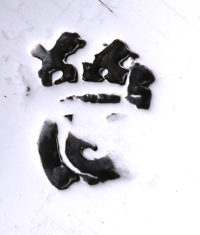 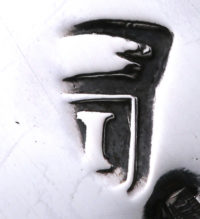 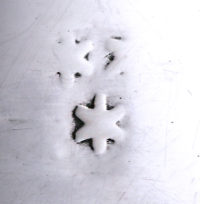