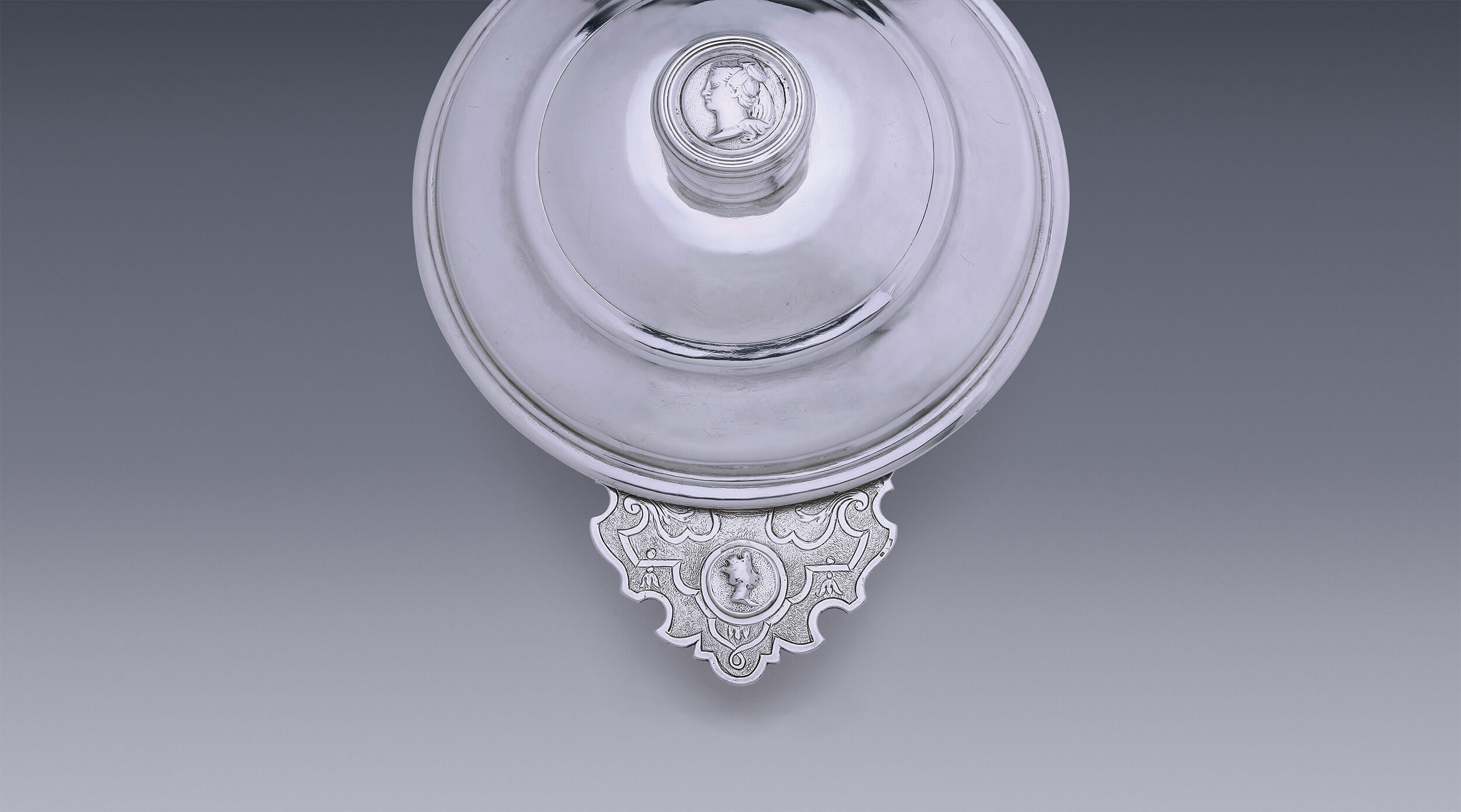 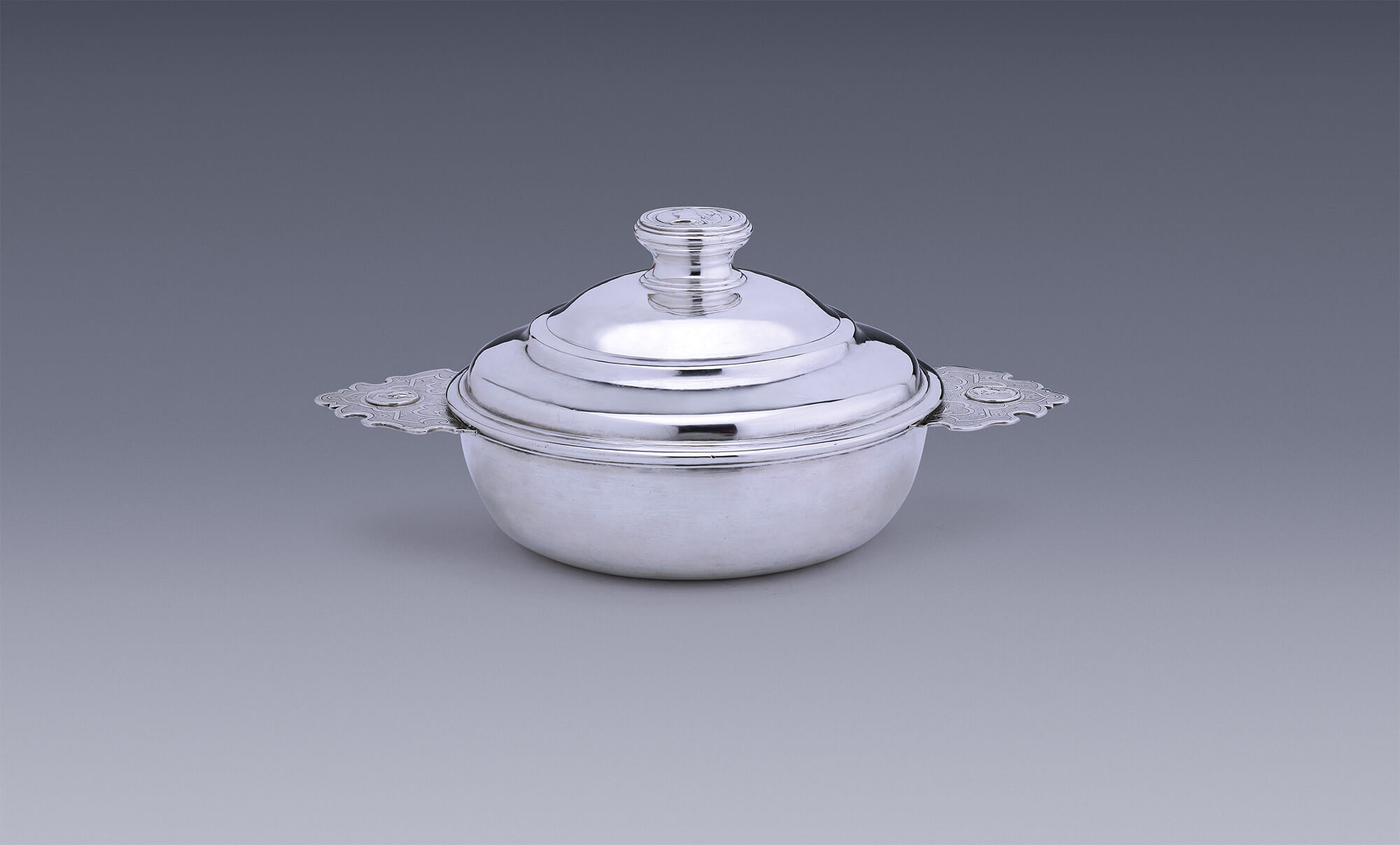 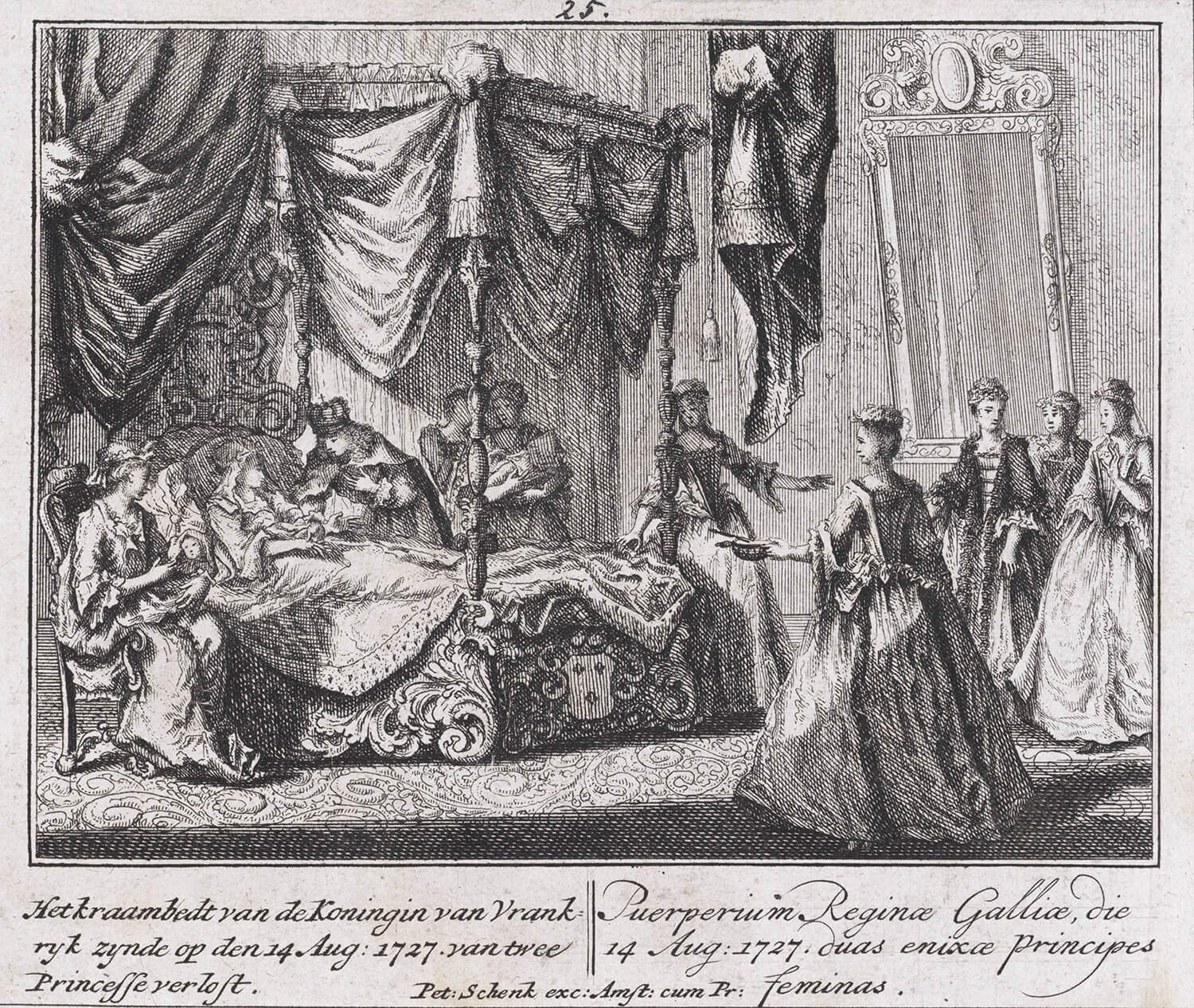 This porringer or ecuelle with cover was made by Henderick Dresens in Maastricht in 1732-34. The design is Louis XIV style; two flat cast handles are the only decoration on the round, completely plain bowl. Each bears a portrait medallion surrounded by engraved strapwork on a matt background. The knob on the domed cover is also decorated with a portrait medallion. Seventeenth- and eighteenth-century Maastricht silver is much rarer than silver from cities like Amsterdam and The Hague. This is one of the two known covered tureens made in Maastricht.

Porringers
Porringers of this type, known as écuelles d’accouchée or ecuelles, were used in well-to-do households to serve soup or gruel. They derive their name from the custom of serving a new mother a light, fortifying meal after the birth; it was served in a silver vessel like this.

Portrait medallions
Portrait medallions and strapwork were fashionable in the Louis XIV period. At that time artistic creativity was not a personal or individual matter; different designers and craftsmen contributed to a greater whole. A sort of art director was appointed to oversee the decoration and furnishing of large building projects such as Louis XIV’s Palace of Versailles. Charles le Brun was responsible for the interior. He determined the overall scheme and all the ideas relating to the design required his approval. The most important contributions came from Jean Berain.  On 28 December 1674 he was appointed dessinateur de la Chambre et du cabinet du Roi (designer of the king's chamber and office). He developed an elegant, flat style of ornament, based on grotesques from the Renaissance period and including portrait medallions and C-shaped strapwork linked by straight lines. It was sometimes called le style Berain.Disseminated by his engravings, his style was highly influential beyond the court and Paris, notably in the Low Countries, Germany and London.  After Charles Le Brun’s death, Berain was commissioned to compose and supervise the whole of the exterior decoration of the king's ships.

Maastricht
For many centuries Maastricht was governed by two rulers at the same time: the Prince-Bishop of Liège and the Duke of Brabant. The role of the two governors was taken over first by the Dukes of Burgundy and then by the Kings of Spain. After the town’s capture by Frederick Henry in 1632, the shared sovereignty was assumed by his mandator, the States General of the Republic of the Netherlands. Although Maastricht was never represented in the States General itself, Dutch influence has been evident ever since. It was not until 1794, when the French army breached the fortified walls and entered the town, that Liège lost its role as joint ruler.

This history had a significant impact on the character of the work produced by goldsmiths and silversmiths in Maastricht, which shows clear outside influences. Ecclesiastical silver designs from Antwerp, which were widespread in the Southern Netherlands, influenced the shapes of Maastricht silver. Secular silver reflects influences from Liège and Holland, particularly The Hague. Government from The Hague, the presence of Hague government officials in the town as well as garrison commanders and officers, most of whom came from there, explain why the design of some Maastricht objects was wholly in line with Hollandish taste.

In the eighteenth-century Maastricht was the sixth largest city in the Republic of the United Netherlands. The military, the councillors, the merchants and some craftsmen flourished. The expansion and improvement of the town that had started in the seventeenth century continued in the eighteenth. Maastricht people had a strong affinity to France, and this could be seen in their houses and their silver. Most Maastricht secular silver was table silver and the commissions reflected the increased interest in eating and drinking customs. Major commissions came from wealthy individuals, church organizations, the civic guard companies and the city itself. We know the names of more than a hundred silversmiths who worked in Maastricht in the eighteenth century.

Henderick Dresens
One of them was Henderick Dresens, this son of Joannes Dresens and Margaretha Hertoghs was baptized in Maastricht on 7 July 1693 and buried in the town on 15 November 1766. On 15 June 1724 he married Joanna la Tour. Henderick Dresens owned three houses: one in Smedenstraat, known as ‘Het visschip van Dort’ and two in Maastrichter Brugstraat. He was dean of the guild three times between 1732 and 1740. His son Johannes Henrickus also became a silversmith and was apprenticed to him.The porringer is fully hallmarked on the underside with the Maastricht assay mark, the date letter H for 1732-34 and the maker’s mark HD ligated for Henderick Dresens. 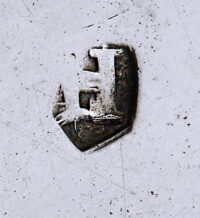 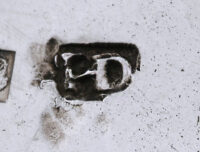 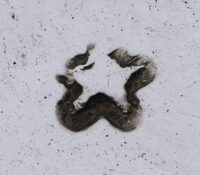